States won’t be able to ban the transport of hemp through their states once the U.S. Department of Agriculture publishes hemp production regulations later this year, according to an advisory opinion from a lawyer for the department.

The opinion also said states already can’t ban the transport of hemp that is grown legally under a 2014 law, and it took issue with a recent ruling in a pending case involving 6,700 pounds of hemp seized in Ada County in January.

The cultivation of hemp, a non-psychoactive cousin of marijuana that has industrial uses such as rope and fabric manufacturing, was legalized federally under the Farm Bill that passed in December. While many states are working on plans to regulate hemp cultivation, Idaho remains one of the few where driving a load of it through the state might get you serious prison time.

Three truckers moving hemp through Idaho have been arrested in Ada County over the past year or so. Andrew D’Addario and Erich Eisenhart were arrested in 2018, pleaded guilty to lesser felony charges and are scheduled to be sentenced June 25. Oregon trucker Denis Palamarchuk was arrested in January and is facing a five-year mandatory minimum sentence if convicted. His case is pending.

“I think it’s great,” Rep. Ilana Rubel, D-Boise, said of the USDA opinion. “I hope that it is one more thing nudging the prosecutors to drop the charges.”

Palamarchuk’s employer, Big Sky Scientific, is suing Idaho State Police to get its hemp, truck and trailer back. U.S. District Judge Ronald Bush denied its motion in February, noting that Oregon doesn’t have a federally approved plan under the 2018 Farm Bill. Big Sky is appealing.

“The USDA ruling provides even more support to our efforts to have our shipment returned,” CEO Ryan Shore said Wednesday. “The hemp was legally produced in Oregon and was being shipped legally to Colorado for processing when it was seized in Idaho. We believe the Ninth Circuit Court of Appeals will rule in our favor and order release of our property.”

A bill legalizing hemp passed the Idaho House 63-7 this year. However, law enforcement and prosecutors opposed it, and the Senate heavily amended it into a bill that would have left hemp illegal but allowed its transport with restrictions. The House rejected this, and lawmakers adjourned for the year in April without passing anything, leaving the status quo in place.

According to the legal opinion from U.S. Department of Agriculture lawyer Stephen Vaden released Tuesday, hemp is no longer a controlled substance at the federal level, and states and Indian tribes cannot ban the interstate transport of hemp legally grown under the 2014 Farm Bill, which allowed limited hemp cultivation for research purposes. Vaden said he disagrees with Bush’s February ruling in the Big Sky case, writing that the hemp in question was produced by a grower licensed in Oregon and thus presumably following the 2014 law.

“The Idaho court failed to read the statute as a whole and did not consider the ‘other federal laws’ clause that I found conclusive,” Vaden wrote. “Given the preliminary nature of the magistrate’s ruling, I find his opinion denying a preliminary injunction unpersuasive.” 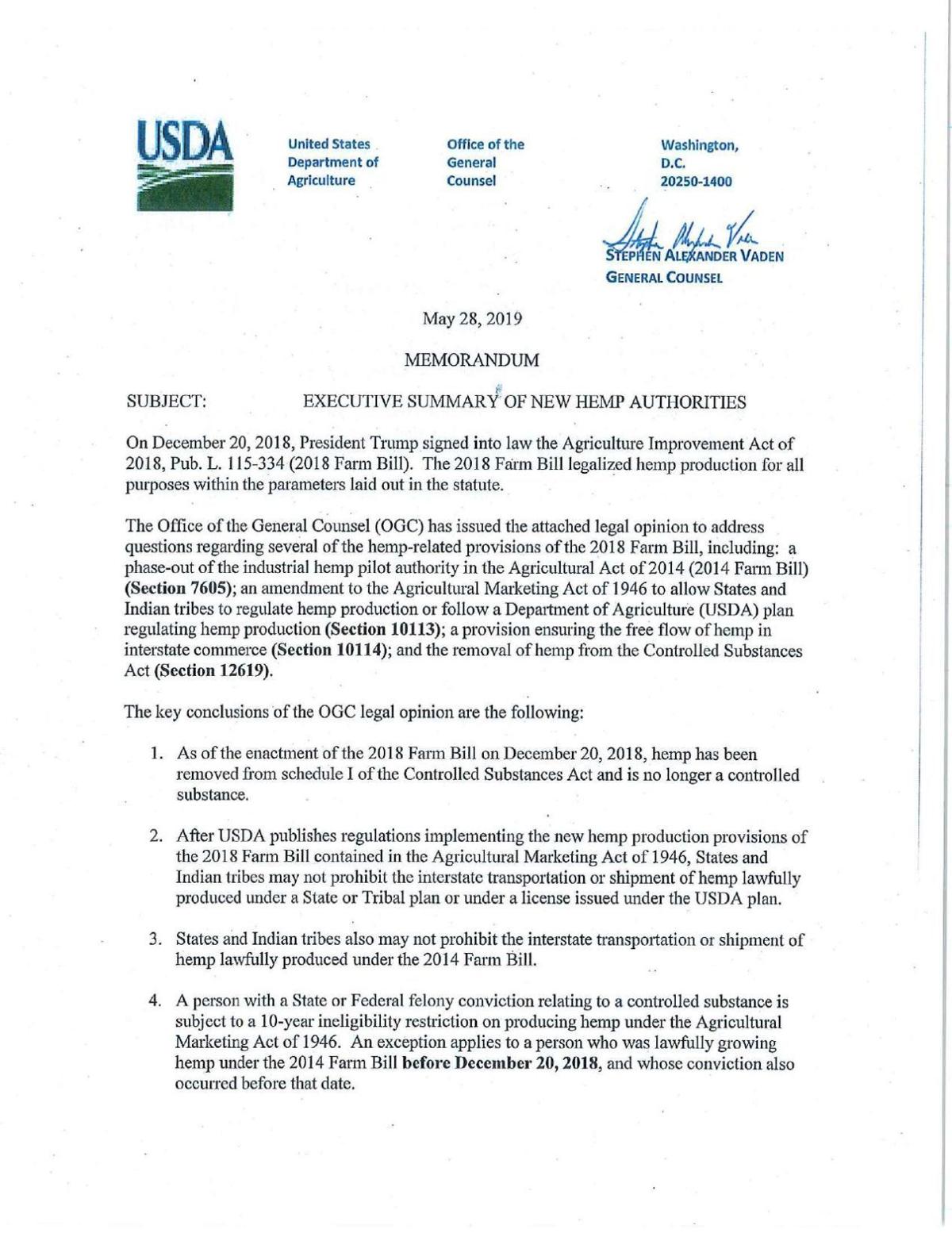 “The USDA has now spoken and their message is that Big Sky and our driver were acting legally in using the federal highways to transport industrial hemp, grown in Oregon under a Farm Bill-approved program, from Oregon to Colorado,” Shore said. “We hope that Idaho now chooses justice over political grandstanding.”

The USDA plans to issue regulations this fall to implement the 2018 Farm Bill’s much more expansive hemp cultivation provisions. After that, Vaden writes, states and tribes will not be able to ban the interstate transport of hemp as long as the hemp is grown legally under a state or tribal plan or a federal license. Vaden noted that the 2018 bill still lets states ban hemp production if they wish.

The advisory opinion won’t, it seems, result in any immediate changes in Idaho’s law enforcement practice. Idaho State Police spokesman Tim Marsano said he didn’t have anything to add to a statement ISP and Bennetts put out last week.

“The 2018 Farm Bill’s intent of allowing the interstate transportation of hemp will only be realized once there is a regulatory system in place,” that statement said. “As of this date, that system has not been developed in any state — including Idaho — and is therefore not currently in effect. As a consequence, hemp is not legal in Idaho.”

The statement said the Idaho State Police and the Ada County Prosecutor “understand the desire to provide a legal pathway for an alternative crop for Idaho’s farmers and for those who transport it across state lines” and were working on a solution.

“Those of us who enforce Idaho’s laws are bound by the laws which currently exist, not those which may exist at some future date,” it said.

Rubel said time is running out for D’Addario and Eisenhart. Ada County is working on next year’s budgets now, and she urged residents to voice their opinions to county commissioners.

“I do really hope that people will make clear to the commission this isn’t how they want their tax dollars being spent,” she said.

BOISE — Amid disagreement between House sponsors on an amended bill that would have allowed for interstate transport of hemp through Idaho, th…