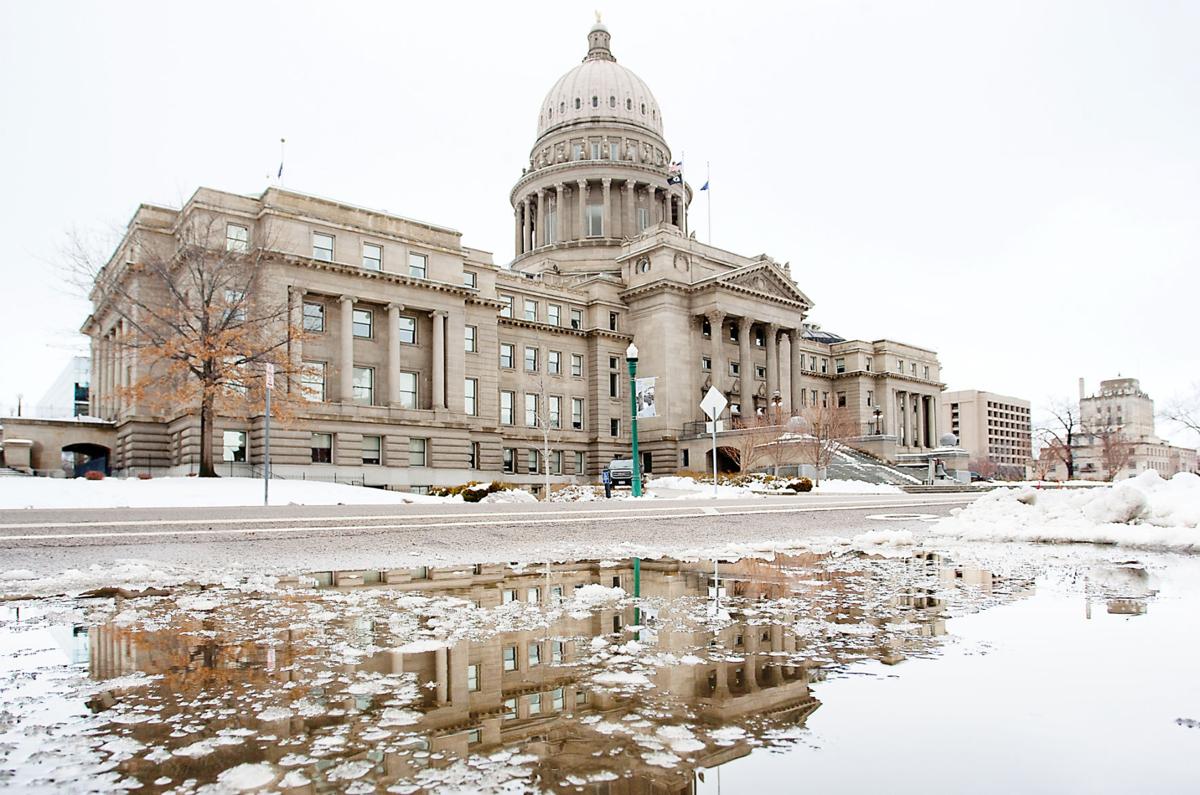 Puddles of water form as snow melts from the Idaho Capitol building in downtown Boise on Monday, Feb. 15, 2021. 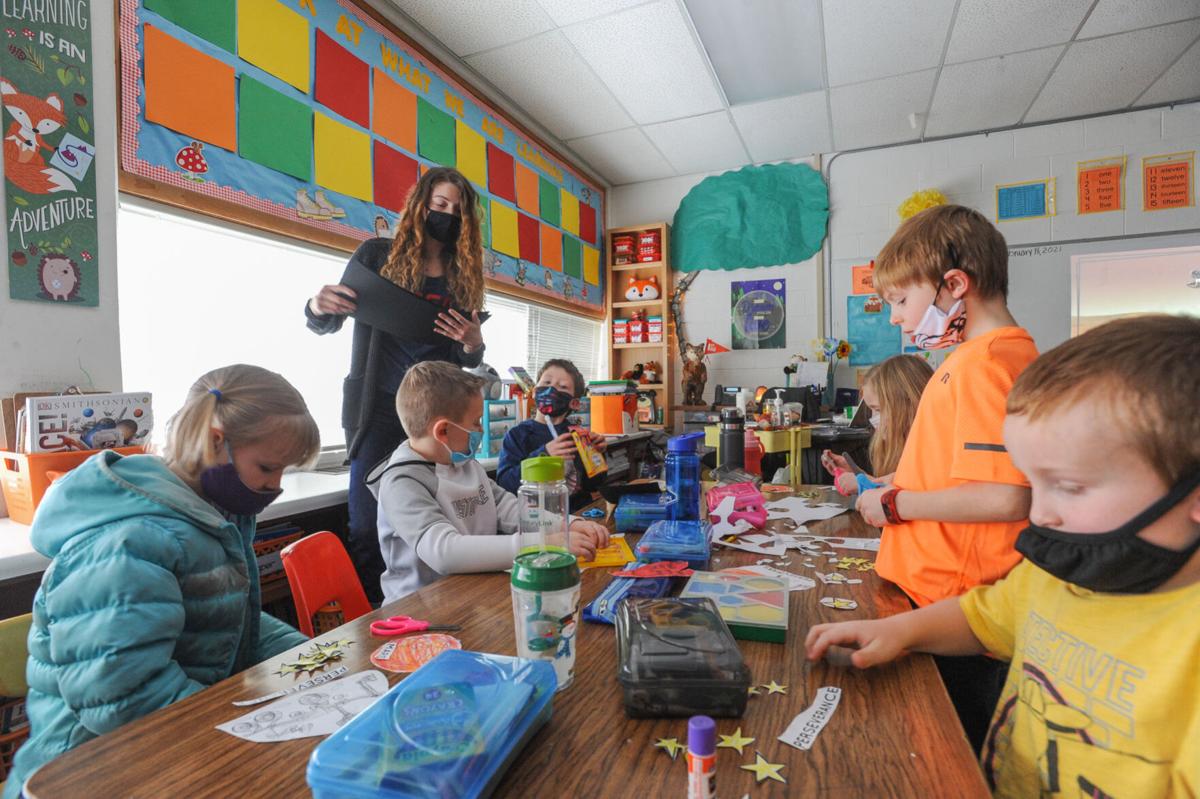 Haley Riese helps kids with their project at Temple View Elementary School in Idaho Falls, Idaho, as the NASA rover Perseverance prepares to land on Mars on Thursday, Feb. 18, 2021. 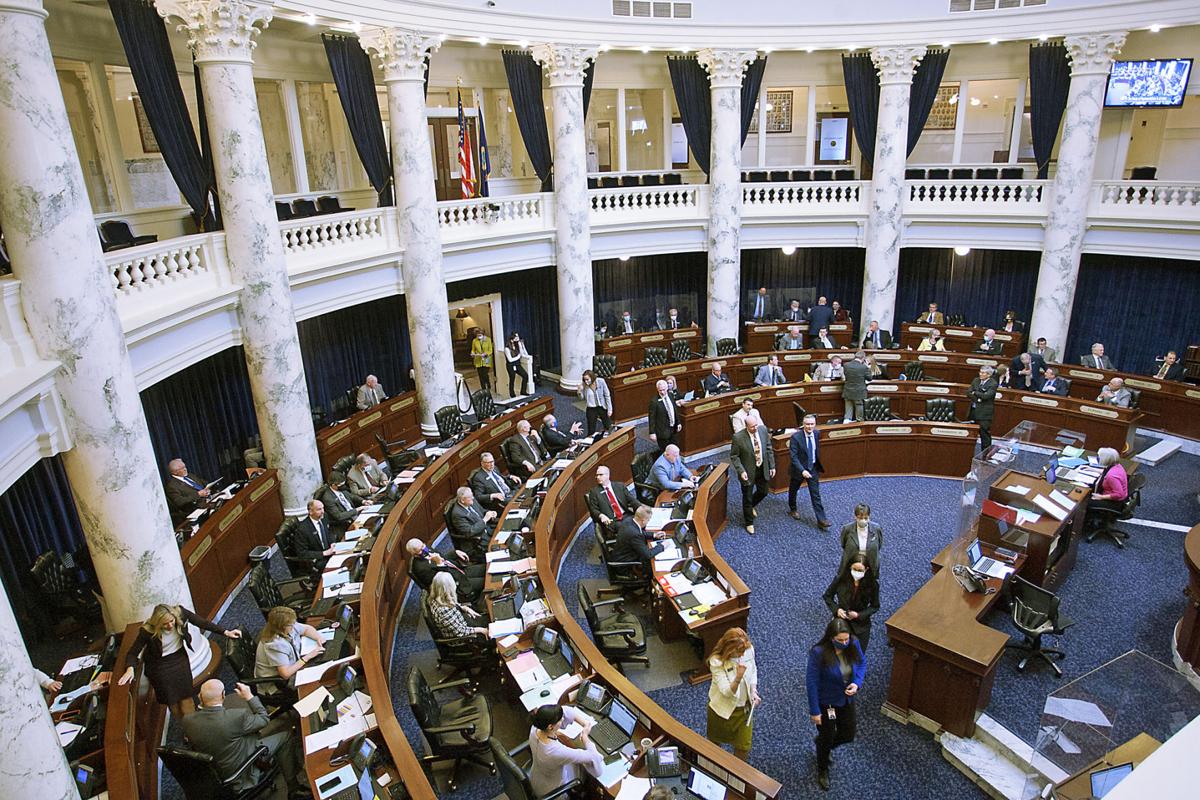 Representatives work in close quarters on the floor of the House chambers at the Idaho Capitol building on March 18. The Idaho Legislature will reconvene Tuesday after shutting down amid a COVID-19 outbreak at the state Capitol. 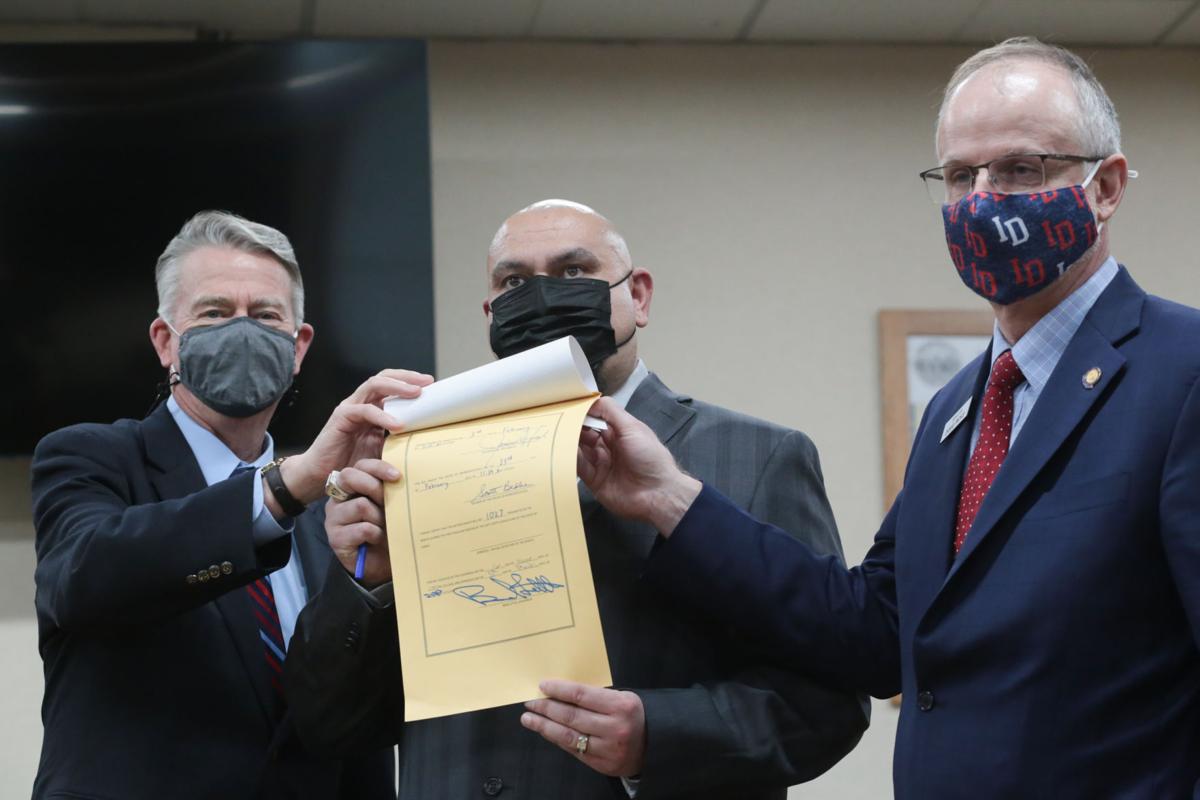 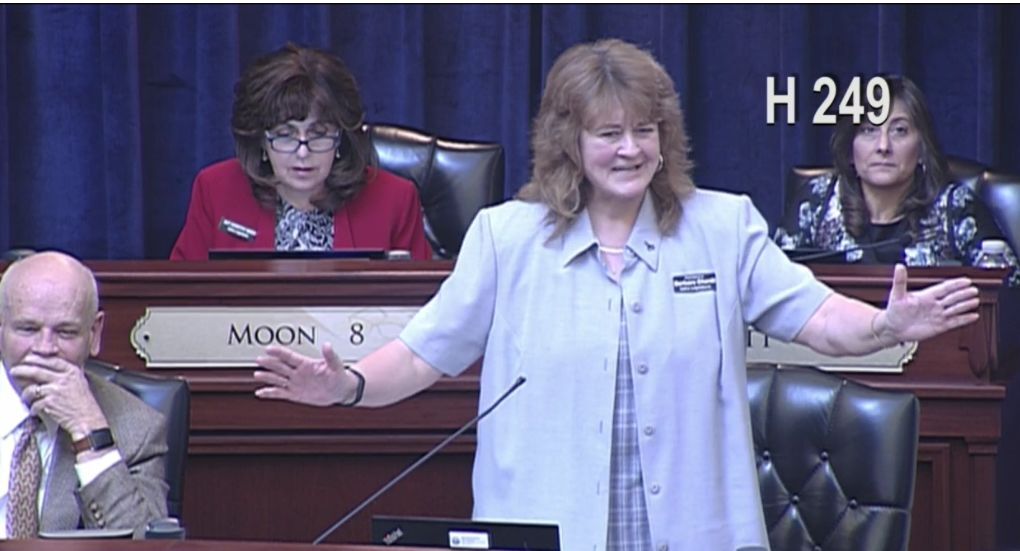 Puddles of water form as snow melts from the Idaho Capitol building in downtown Boise on Monday, Feb. 15, 2021.

Haley Riese helps kids with their project at Temple View Elementary School in Idaho Falls, Idaho, as the NASA rover Perseverance prepares to land on Mars on Thursday, Feb. 18, 2021.

Representatives work in close quarters on the floor of the House chambers at the Idaho Capitol building on March 18. The Idaho Legislature will reconvene Tuesday after shutting down amid a COVID-19 outbreak at the state Capitol.

BOISE — At the beginning of each year, legislators gather for approximately three months at the Capitol with the intention of creating or modifying laws. All these laws start as bills. Each of them starts as a routing slip, also known as an RS. These routing slips are presented before a committee that votes on whether to introduce them as a bill.

The Post Register took a look at what proposed legislation representatives and senators from across eastern Idaho successfully brought from an RS to a bill this session.

Though routing slips can have a number of sponsors, this article includes bills in which a local legislator was one of the primary people responsible for getting these bills introduced.

Of the many bills local legislators introduced, just four of them have made it into law thus far. Bills aimed at dealing with 2020 events have dominated the Legislature's time, leaving little room for anything else. Those 2020-related bills focus on undoing Gov. Brad Little's COVID-19 health orders, finding ways to spend the large amounts of federal relief dollars and changing voting laws. Many bills that would have quickly made it to the House and Senate floors in any other year have languished in committees as newer, shinier proposals get heard and debated.

Though if there's anything eastern Idaho legislators seem to address, it is laws regarding children. The most successful, and at times the most controversial, of their bills have been about education and youth issues. These bills changed what kinds of things students can learn about, whether their teachers can carry guns and what kinds of financial aid students can receive.

With the 2021 Legislative session expected to wrap up in the coming weeks, our lawmakers will be working with very limited time to push their bills through. Some may make it to the governor's desk and others may not get another glance until next year.

This article is not a complete list, but it includes the most significant bills. Bills from the Joint Finance-Appropriations Committee (JFAC) are not detailed. If a bill has been halted, killed or signed into law, it is noted in the article. Otherwise, all bills described still have the possibility of moving through the Legislature to become a law in the final weeks of the 2021 legislative session.

Cook introduced just one bill on his own. SB 1116 gives a school board more control over disciplinary actions for students who are found to have brought a weapon to school. Cook also sponsored nine JFAC bills.

Lent helped introduce HB 222, which would be one of the most comprehensive pieces of education reform to come out of this session, to create an education council whose goal would be to eliminate “unnecessary bureaucracy” such as certain standards and tests that do not “add value.” Instead, the council would seek to introduce new measurements and requirements such as “staff evaluations, college and career advising, and literacy intervention.” Lent also sponsored 11 JFAC bills.

Most notably, Ricks introduced the long-awaited SB 1027 that will give those wrongfully convicted $62,000 for each year they were in prison. Claimants will also get $25,000 per year on parole, and if a claimant was on death row then the annual amount is upped to $75,000 per year. Little has signed it into law.

Ricks' SB 1149 would grant “express authority” for Idaho communities to “build and maintain broadband infrastructure ensuring communities across the state can gain crucial access to the internet” and created a process to “incentiviz(e) internet service providers to partner with municipalities.”

Ricks crafted SB 1105 to require county treasurers to maintain an electronic version of voter-approved bonds and levies on a county’s website for the public.

Burtenshaw, with the help of his substitute, recently retired Sen. Jeff Siddoway, introduced two pieces of legislation. SCR 104 would complete a flood risk study on the benefits of changing the winter flood control rule at Ririe Reservoir. The study would look at the benefits of lowering the reservoir in autumn to match predicted snowfall levels instead of the current practice of draining it to a designated level.

The second bill, HB 238, would change the classification of the wolf in some big game management units to a predator. This change would allow different methods of take in units by allowing wolves to be hunted from ATVs, UTVs or snowmobiles.

Horman introduced HB 172 to allow public school students to earn credit for learning done “outside of traditional classrooms, such as music lessons not currently offered at schools, internships, trade apprenticeships or military service." Little has signed this bill into law.

HB 173 provides for the "transfer of the mission, oversight and operations of the Idaho Office of School Safety and Security from the Division of Building Safety to the Office of the Idaho State Board of Education." Little has signed this one into law as well.

Horman’s HB 294 would create the Strong Students Grant Program to give grants to mostly low-income families for education-related purchases. Previously this bill included a Strong Students Scholarship Program that would have created a tax credit scholarship program but was removed after some expressed concerns.

She helped introduce SB 1046 to create a way for "parents to request an alternative curriculum” at public schools.

Horman's HC 8 would direct the Interim Committee on Federalism to study the impact of the United States Government Payment in Lieu of Taxes (PILT) program in Idaho by looking at “the fair taxable value of certain federal lands.”

Erickson’s HB 336 would allow foster children to stay within the foster system until 21, rather than the current age of 18. It also would provide more guidelines for how to treat foster children struggling with mental or emotional issues.

HB 26 would eliminate the practice of defining juvenile offenders as “habitual status offenders.” This bill would mean juveniles who have committed frequent offenses could no longer be treated differently than first-time juvenile offenders. Labeling someone as a “habitual status offender” allowed the juvenile to be placed in juvenile detention centers more quickly, for a greater number of reasons and for longer periods of time. Little has signed this bill into law.

Ehardt’s HB 197 would “remove local government's ability to use the misdemeanor penalty when creating local ordinances.” Under Ehardt's bill, a first-time violation of any city or county law would receive no more than a $25 fine.

Ehardt’s HB 249 would require parents to opt their students into lessons on "human sexuality" about anything other than reproduction or anatomy.

HB 329 bill would make it so students cannot participate in school clubs or club events without their parents’ permission.

Marshall did not play a primary role in the introduction of any bills this session.

Christensen's HB 190 would give members of the military stationed out-of-state a 50% reduction on one vehicle registration per household.

Another bill of his, HB 190, would create a welfare fraud unit with the Idaho State Police. The Idaho Department of Health and Welfare currently handles welfare fraud investigations.

Though never allowed a committee hearing, Christensen also tried to propose a bill to impeach Little for actions the governor made in response to the coronavirus pandemic.

Nate’s “free range parenting” bill, HB 3, would protect parents who want to give their children less supervision from being charged with neglect.

HB 21, the so-called "lemonade stand" bill, seeks to limit the government’s ability to collect licenses, permits, fees or sales tax from children under 18.

Nate's HB 7 would specifically list gold and silver as an option for how the Treasurer’s Office can invest the state’s money.

Weber introduced HB 53, which would have ended the requirement that public notices be published in newspapers. After debate, it failed when the House voted 38-33 against the bill.

Hanks introduced HB 339 to ban mask mandates, but it was sent back to the amending order for changes after it was pointed out that one sub-paragraph did not clarify that mask requirements are prohibited in cases “specifically for the spread of infectious diseases.” This means, under the bill, no one could ever be required to wear a face shield or mask for employment or entry. Rep. Greg Chaney, R-Caldwell, said this means the law could be applied to surgeons who don’t want to wear masks in surgery or a welder who doesn’t want to wear his mask while on the job.

Young proposed HB 59 that would allow adoptees born after July 1, 2021, to access their original birth certificate upon their 18th birthday.

Young also introduced HB 237 that would create the Sage Grouse Preservation Program. The program would attempt to see if sage grouse, the populations of which have been on the decline, can be successfully raised in captivity.

Cannon introduced HB 241 that would provide a petition for relief in certain instances in which an individual must get an interlock device put on their car following a driving under the influence conviction. An interlock device is an in-car breathalyzer that prevents a driver from starting their car if they are intoxicated.