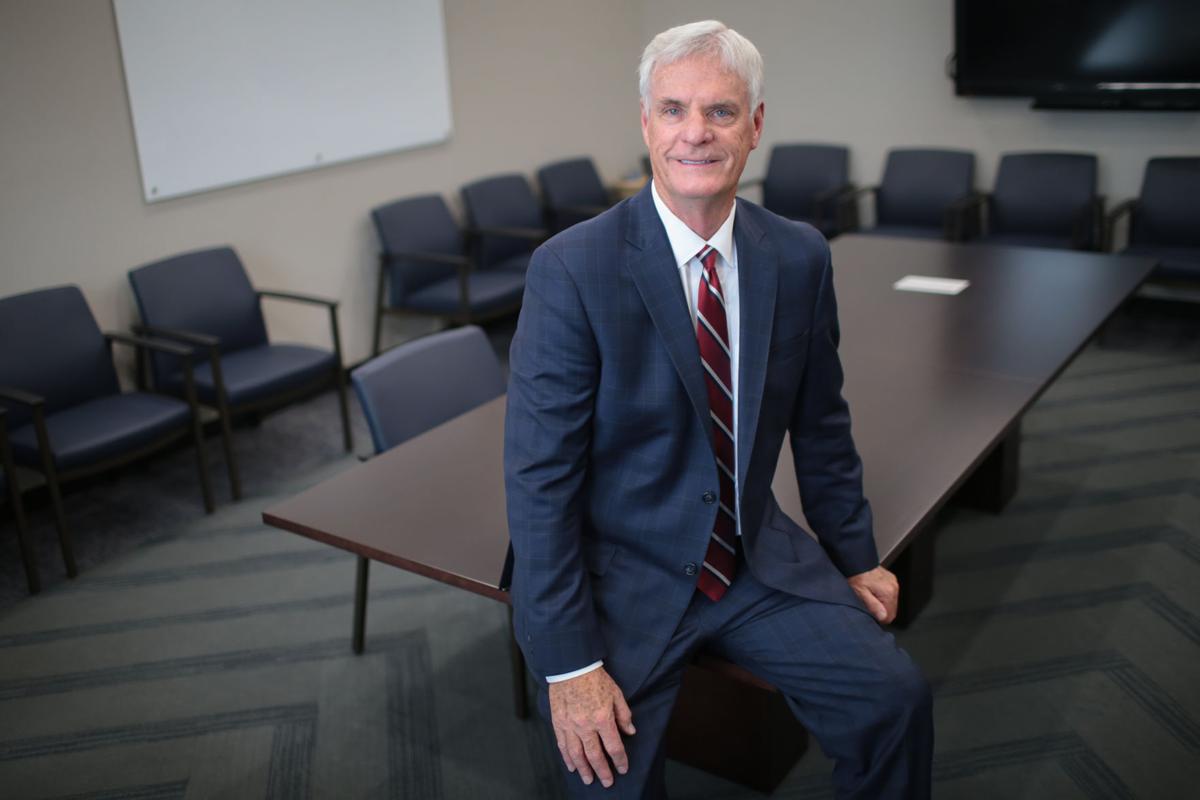 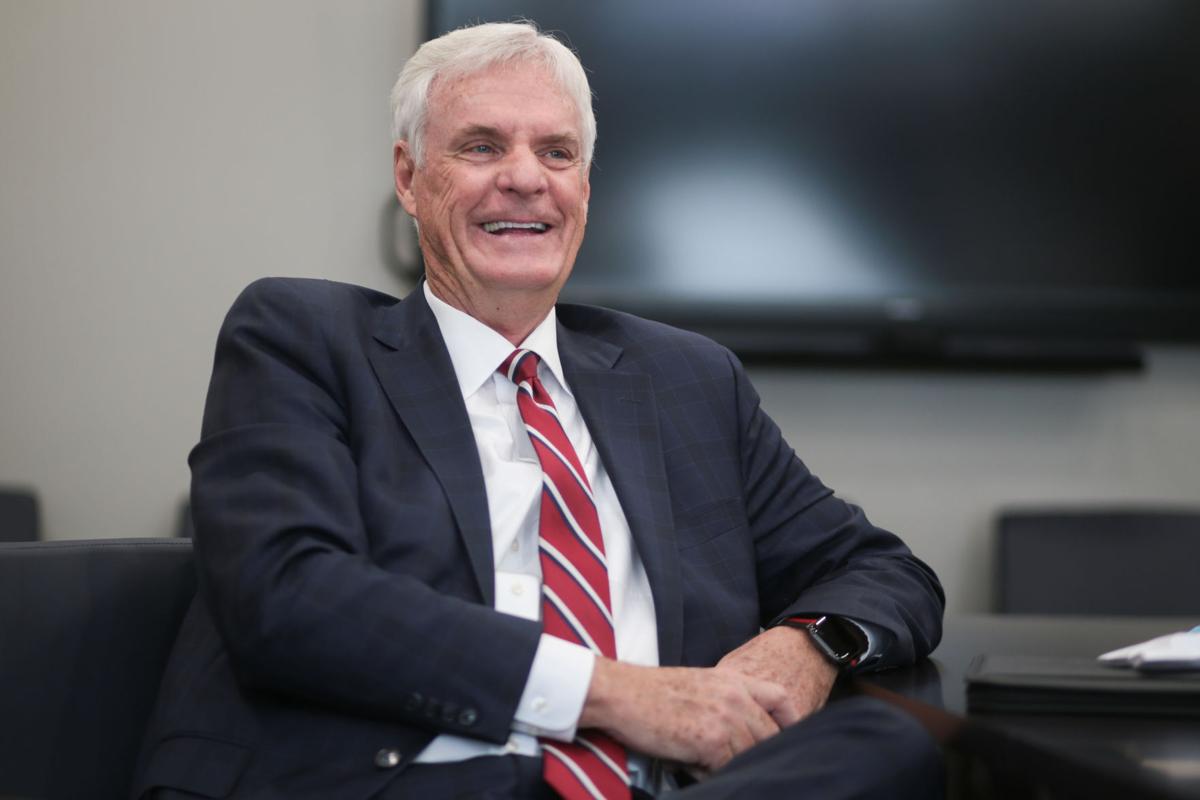 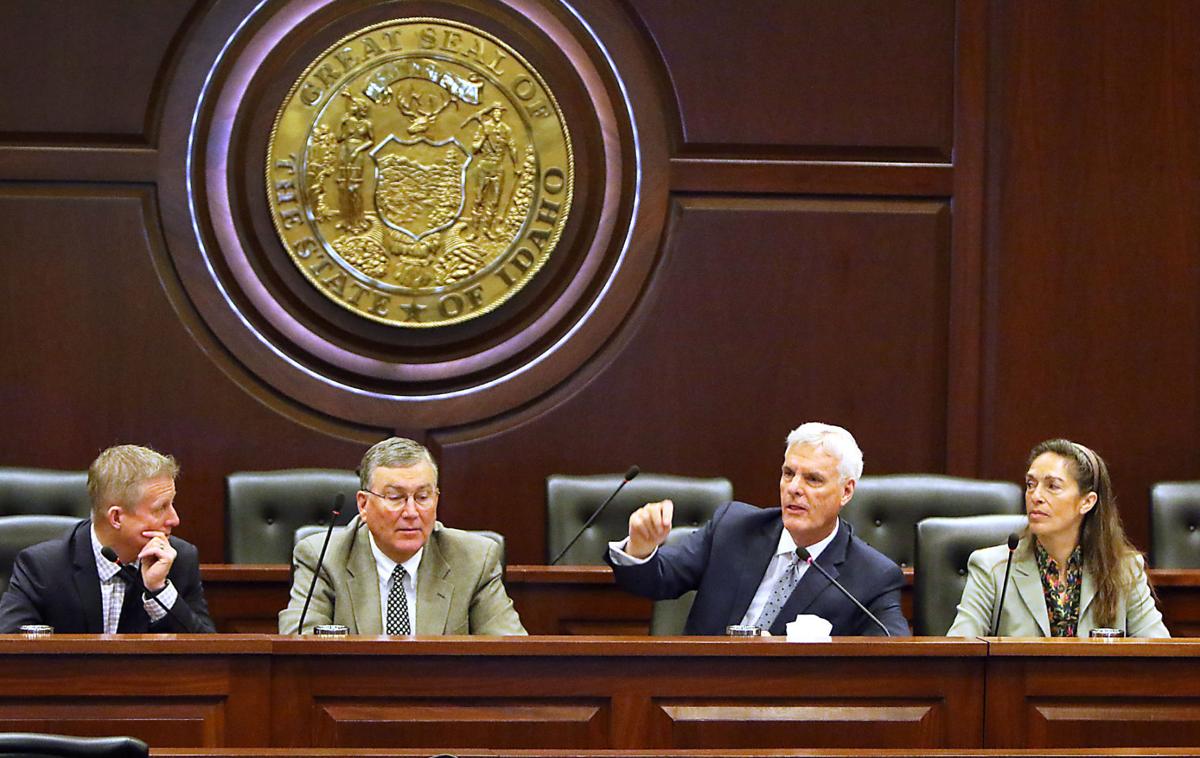 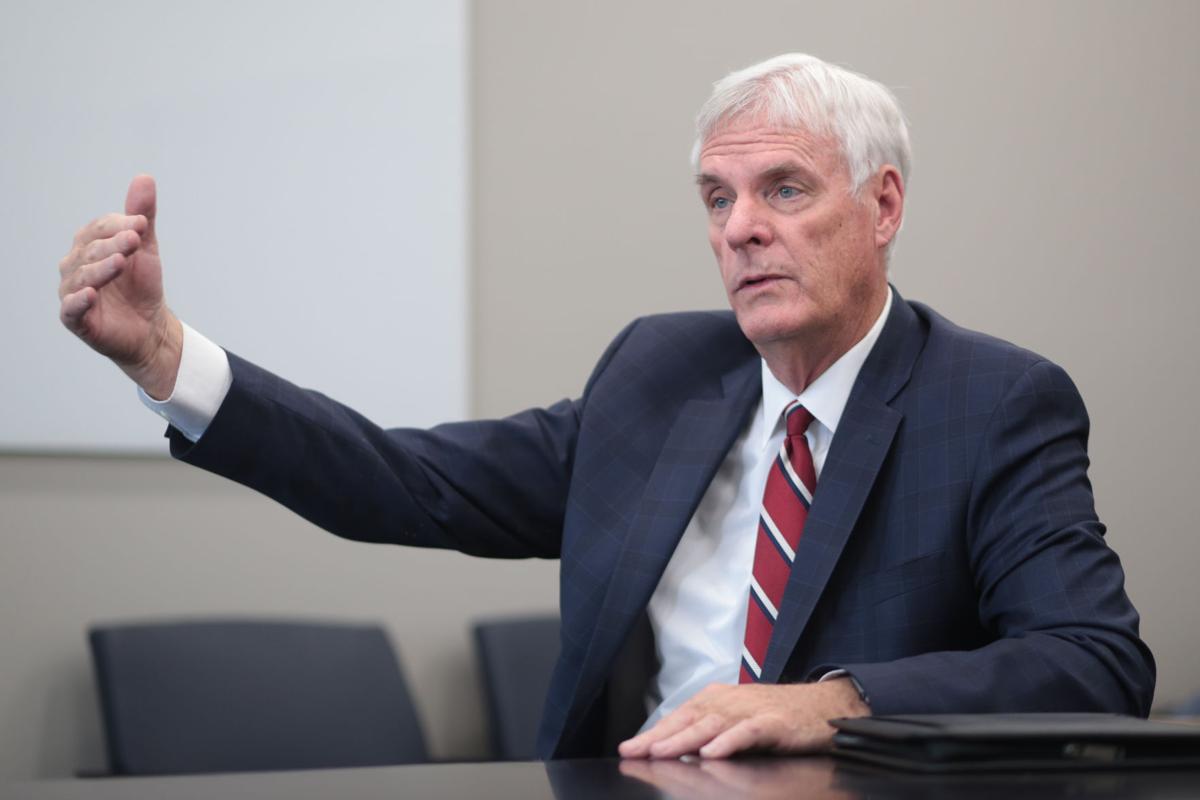 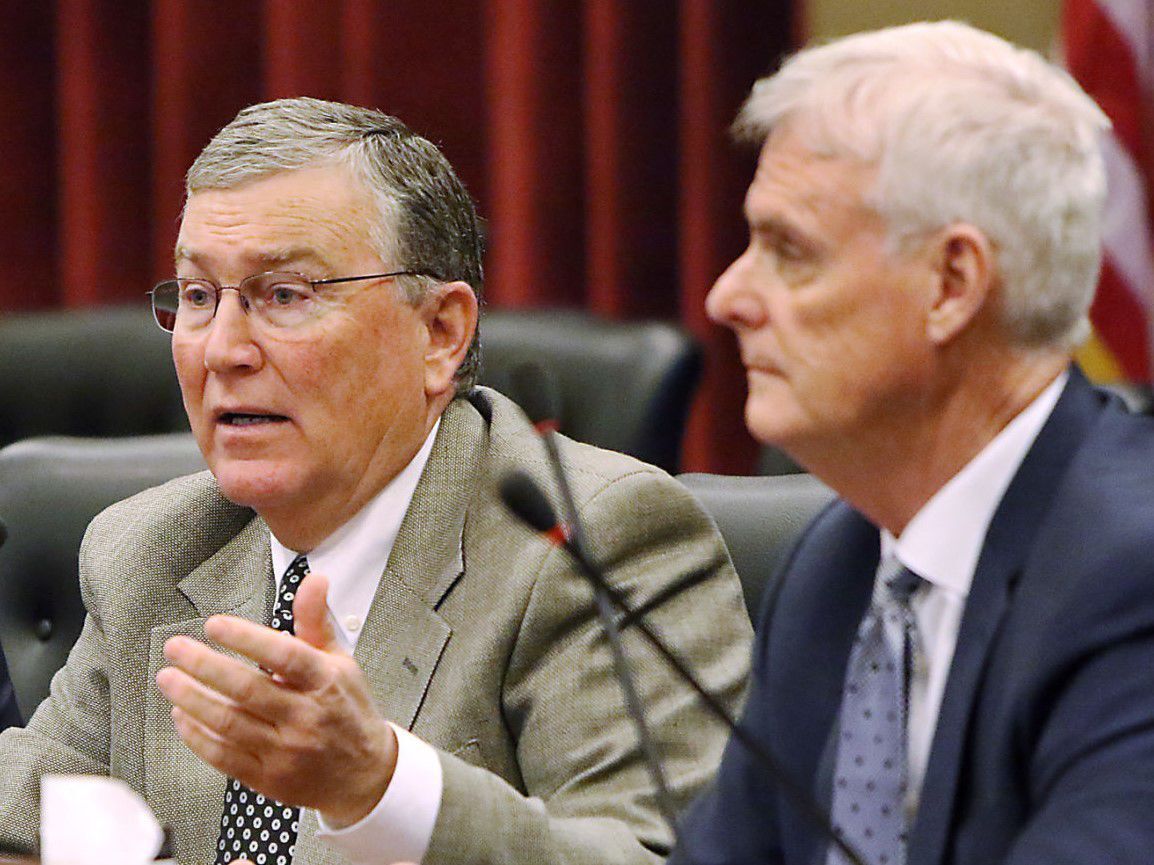 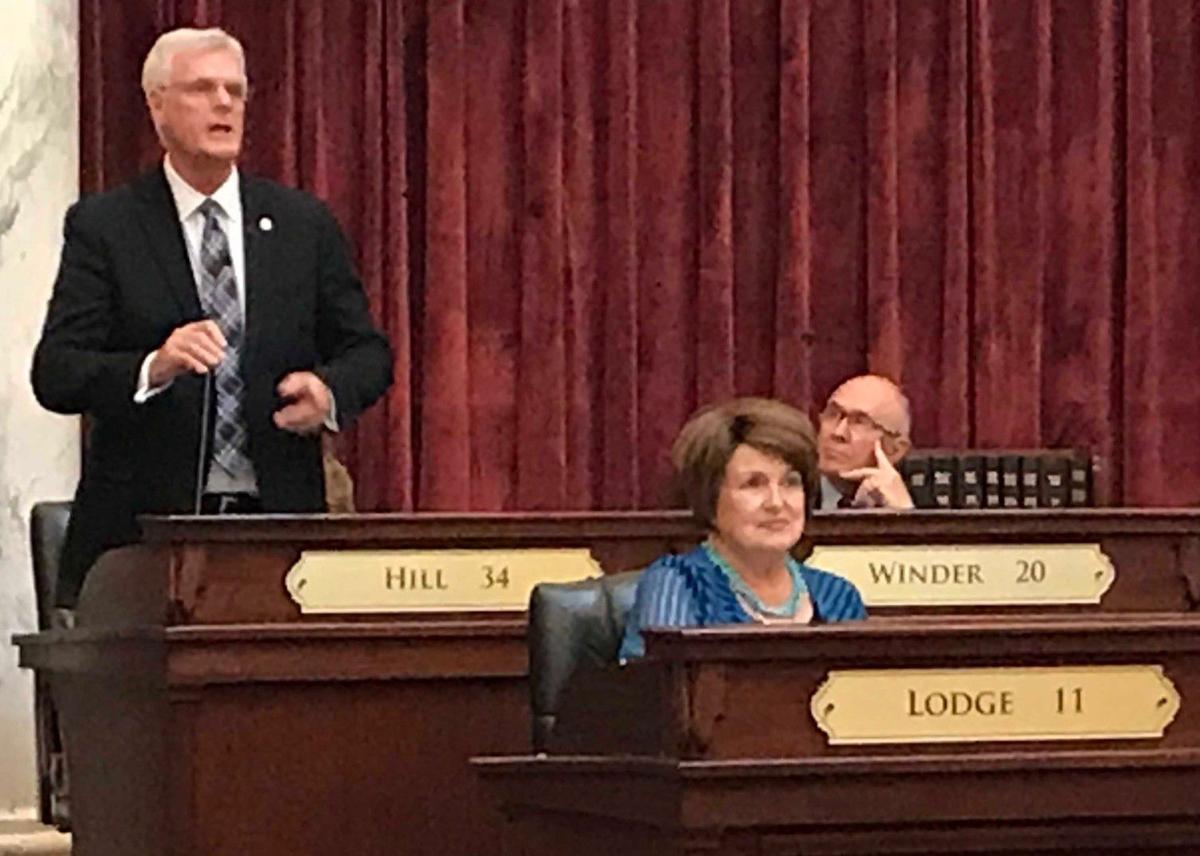 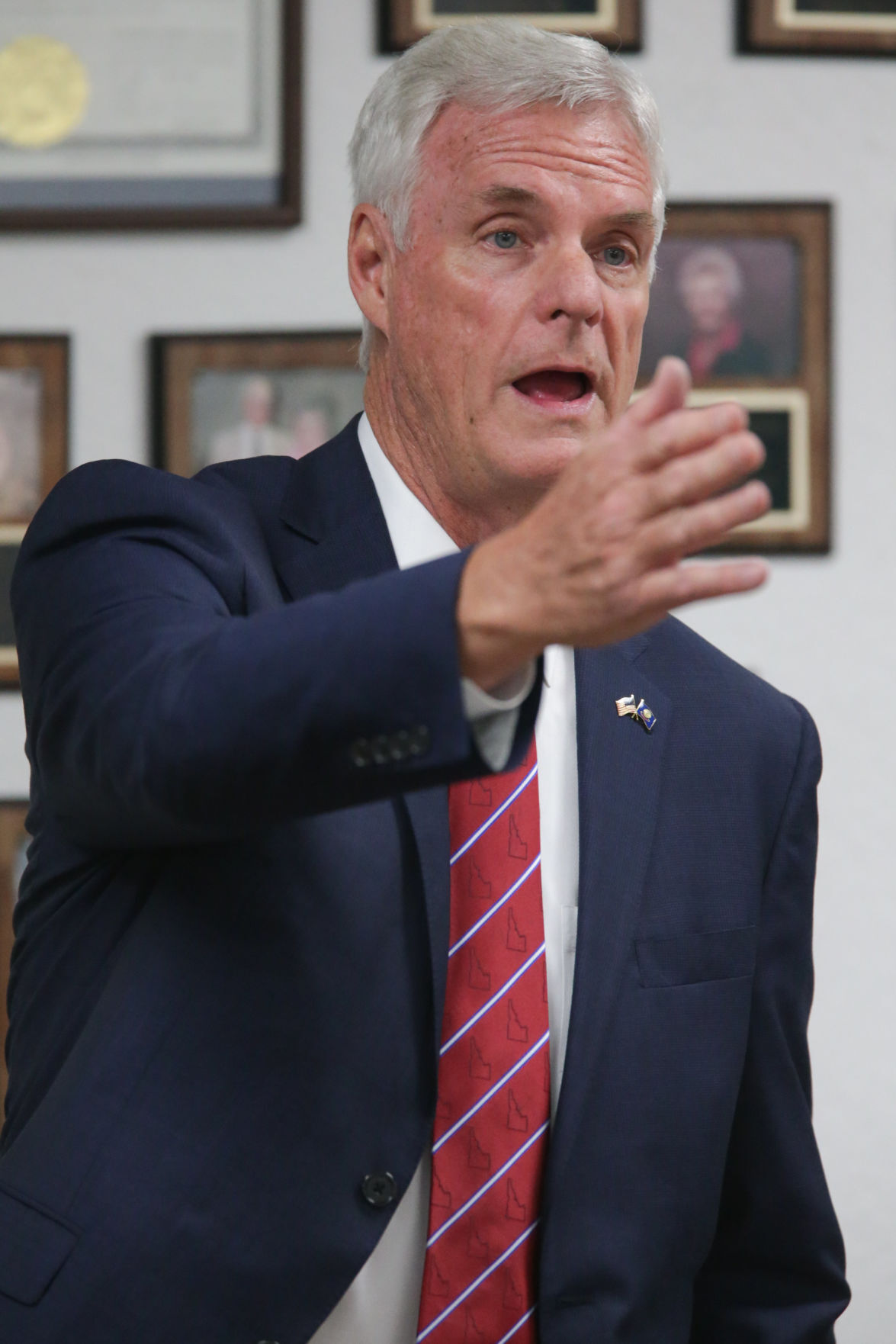 Incumbent Sen. Brent Hill, R-Rexburg, speaks to audience members during a candidate forum hosted by The League of Women Voters at the Madison County Senior Center on Monday. Hill is defending his senate seat for Legislative District 34, covering Madison County and portions of Bonneville County. 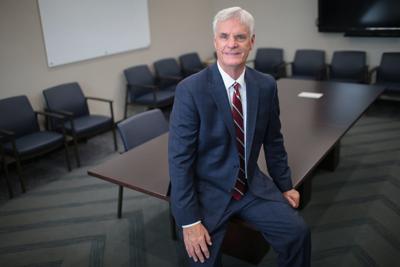 Incumbent Sen. Brent Hill, R-Rexburg, speaks to audience members during a candidate forum hosted by The League of Women Voters at the Madison County Senior Center on Monday. Hill is defending his senate seat for Legislative District 34, covering Madison County and portions of Bonneville County.

Hill, an accountant, had been involved in a couple of community organizations and had long been fascinated with politics. In 2001, when Sen. Robert Lee, who was battling cancer, stepped down, Hill, who had been Lee's campaign treasurer, was appointed to fill the spot.

"I was probably too shy to run on my own for the first time, but I got appointed and I loved it," Hill said.

Hill went on to be elected in his own right nine times, never facing a serious challenge in the heavily Republican district. Due to his profession, he quickly became one of the go-to lawmakers on tax issues and ended up heading the Local Government and Taxation Committee. But he never planned on being Senate president pro tempore. He was never Majority Leader or in one of the other leadership positions that are traditionally stepping stones to the role.

"I'm just kind of a go from no place to someplace guy," Hill said.

This changed 10 years ago, when he and then-Senate President Pro Tempore Bob Geddes were on a trip to Boston together. Geddes said he was planning to retire, and asked Hill if he would like to run for the job.

"He was a great mentor, and he really motivated me to run for it and was very supportive of me in the whole process," Hill said.

Hill ran, beating Russ Fulcher, who was a state senator then and is a congressman now, for the job. Now, Hill's 19-year career in the Idaho Senate is coming to an end. Hill decided not to seek re-election this year; current-Rep. Doug Ricks, R-Rexburg, ran for and won the Senate seat. Hill's 10 years leading the Senate make him the longest-serving pro tempore in Idaho history, holding the job about three weeks longer than Geddes.

"We've had a great working relationship," Winder said of Hill. "The pro tem has been a great leader and a great mentor. Worked hard for his constituents and for the Senate and for the state of Idaho."

Hill's departure also spells a likely end to more than three decades where eastern Idahoans ran the state Senate. Geddes, who held the position for the decade before Hill, lived in Soda Springs, and Jerry Twiggs, who held it from 1992 to 2000, was from Blackfoot. Twiggs was preceded by now-U.S. Sen. Mike Crapo, who got his start in politics as a state senator from Idaho Falls and served as pro tempore from 1988 to 1992.

Hill is the only Senate president House Speaker Scott Bedke, R-Oakley, has ever worked with. Bedke said he considers Hill a good friend and got along well with him, and that their wives are also friends.

“Inevitably there was conflict where the House and the Senate didn’t see eye to eye, but we took a vow at the start of our tenure that we were never going to let that damage our friendship and we would treat each other with respect and civility, and I can’t think of an instance that we didn’t do that,” Bedke said. “There were a lot of times when the House and the Senate didn’t agree or didn’t get along, but Scott and Brent always did. It’s not to say we rolled over because of a friendship, but we had mutual respect. It worked well, I thought.”

While both Bedke and Hill had nothing but good things to say about each other, the House and Senate Republican caucuses have not, as Bedke noted, always gotten along. The House, which has seen a greater number of moderate Republican lawmakers beaten in primaries by further-right challengers in recent years, has often seemed like the more ideological body and the Senate has served as a check, rejecting conservative bills the House passes on topics such as sex education or loosening vaccine mandates. To give one recent example, the House passed a resolution during the special session this August ending the COVID-19 state of emergency that the Senate decided not to take up.

Hill said the chambers of the Legislature get along better with each other and with the governor than he has seen in some other states, although he said the Republican dominance of all three likely plays a role there. Hill said Bedke has to deal with different challenges in the House, which is twice the size of the Senate.

Many senators served in the House first, an experience which, Hill said, teaches them how the system works and that they need to work with others to accomplish anything. In the House, he said, more members are "true freshmen," serving for the first time.

"They're idealistic," Hill said. "They're excited. They've made a whole lot of campaign promises in their first campaign."

Both Bedke and Hill remember a dispute over the rules review process that played out during the 2019 session as one of the most difficult challenges they had to deal with. House Republicans wanted to change the process to require both chambers of the Legislature to approve a new rule, while the Senate wanted to keep the current process where only one chamber must. The session ended with the House declining to renew the state's administrative rules before adjourning for the year, leading Gov. Brad Little to scrap many outdated rules and renew the rest as temporary rules that the Legislature had to reappprove during this year's session.

"That caused some real feelings between the two houses," Hill said, adding that he and Bedke worked together to "make sure those feelings of animosity wouldn't carry over into the next session."

Other than negotiating the differences between the two chambers, Hill said one of the most challenging things he has had to deal with has been ethics complaints against fellow senators. He headed the ethics committee that censured Sen. Jack Noble, R-Kuna, in 2005 for failing to disclose his financial interest in a bill he sponsored; Noble resigned as a result. Hill also said dealing with Sen. John McGee, who stepped down in 2012 amid sexual harassment allegations, was one of the hardest things he had to do. Hill gave McGee the choice of either resigning or facing a Senate ethics panel.

"A stain on anybody's record is a stain on the whole body and even government as a whole," Hill said. He said he was used to the responsibilities of management from running his accounting firm, but "it's always the people stuff that's the hardest."

Idaho has cut taxes numerous times over Hill's tenure in the Senate, and he was involved in many of these bills. Both Johnson and Winder said they would remember his work on an income tax cut that passed in 2018.

"That's never easy to do, but we were able to get it done and reduce the exposure that people have to taxes in Idaho," Winder said. "That was something I think was really beneficial."

Johnson, who backed a different tax cut proposal of his own, said: “I think the process worked. Both bills had a hearing in the House. … I think that’s the process, and I think it worked just fine.”

Hill's plan for retirement had been to spend more time with his 20 grandchildren, finally catching up on the time he has missed after spending the last 19 winters in Boise. While this is still his plan, he has also taken a part-time job with the National Institute for Civil Discourse. The Washington D.C.-based group is run by Keith Allred, who Hill knew from previous policy work in Idaho and who was the Democratic nominee for governor of Idaho in 2010.

"I told him I would help out as much as I could but my family came first. … If a ballgame or a workshop with another Legislature conflicted, I got to choose which one I was going to," Hill said.

Hill already has workshops lined up with legislatures in several states, talking to them about dealing with each other, with the other branches of government and with the press and constituents, although COVID-19 has restricted what can be done in person. Hill views the job as a way to help other legislatures benefit from what he has learned.

Bedke said whoever succeeds Hill should take a page from his book.

"He was slow to anger, and he was thoughtful," Hill said. "He was well-prepared, he knew the subject matter always, and … I think the presiding officers have to make a commitment to work well together. That's not to say that one is acquiescent to the other, but you have to recognize the differences between the two bodies and try to find a way to compromise, basically. You find stuff that works on both sides, not just one side. In many ways, the two presiding officers should be the example of decorum and how you want the rest of the body to act. And Senator Hill — I may have had a few lapses, but Senator Hill did a good job."

Hill urged whoever succeeds him to not take themselves too seriously and to remember they are there to serve the rest of the Senate and help other senators succeed. The president pro tempore, Hill noted, is the only Senate leadership position both Republicans and Democrats vote on.

"You represent the whole body," Hill said. "It needs to be a service-oriented attitude."

Few competitive races but several new faces in next Legislature

While the partisan composition of the Idaho Legislature likely won't look too different next year, there will still be new faces, with turnove…