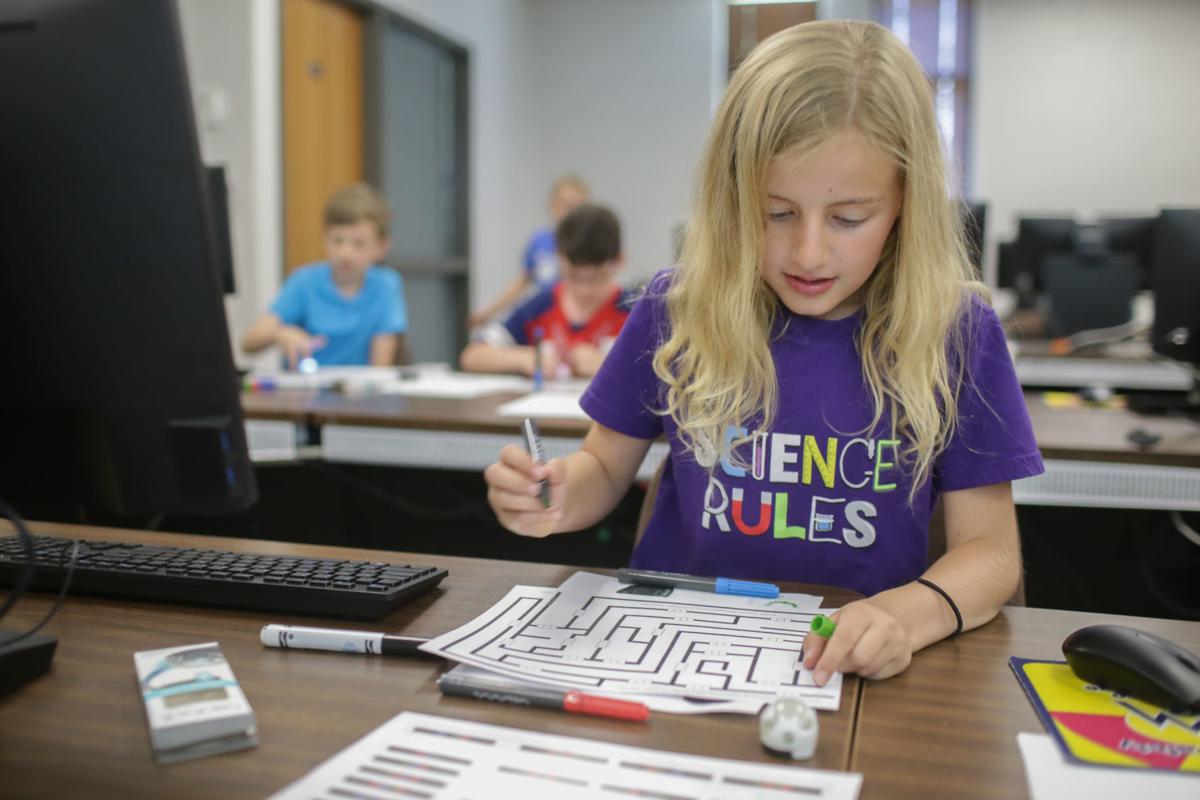 Harley Wells, 9, works on an Ozobot project to learn coding during a science, technology, engineering, and mathematics (STEM) camp at College of Eastern Idaho on Monday, June 17, 2019. 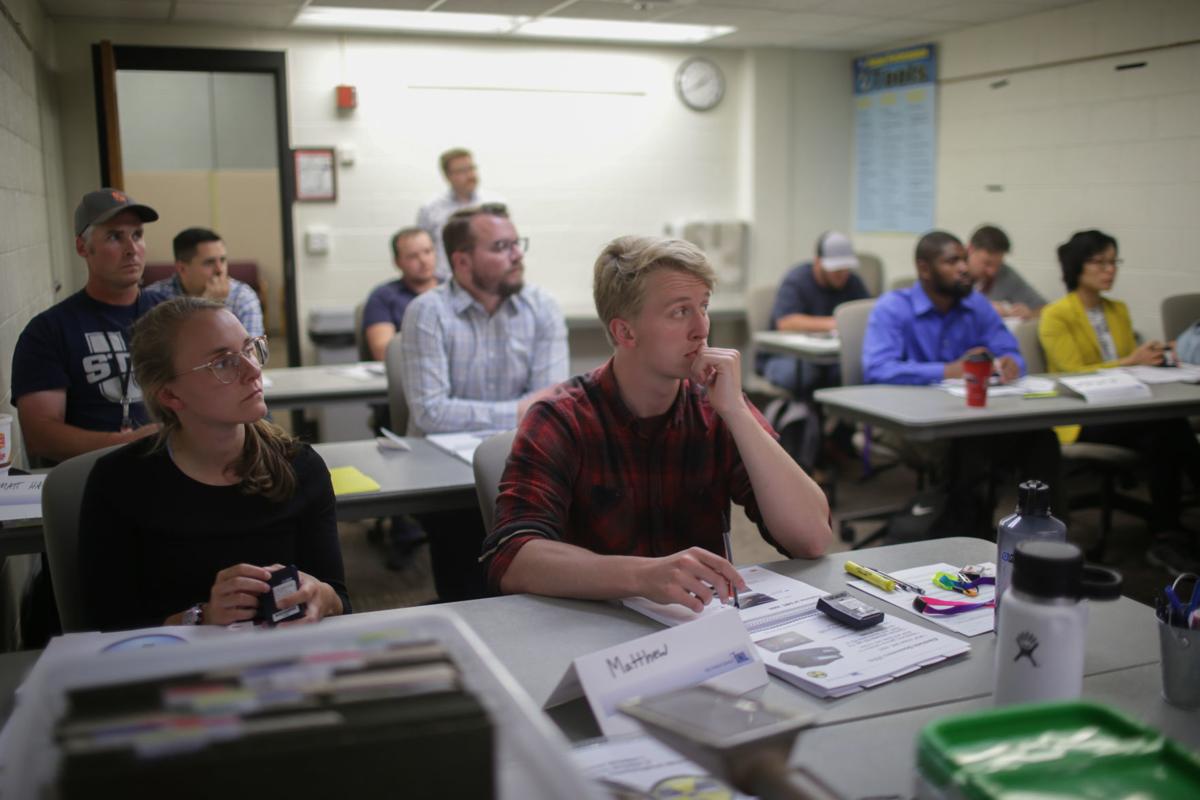 Students learn how to use electronic dosimeters during a radiation technology class at College of Eastern Idaho on Monday, June 17, 2019. 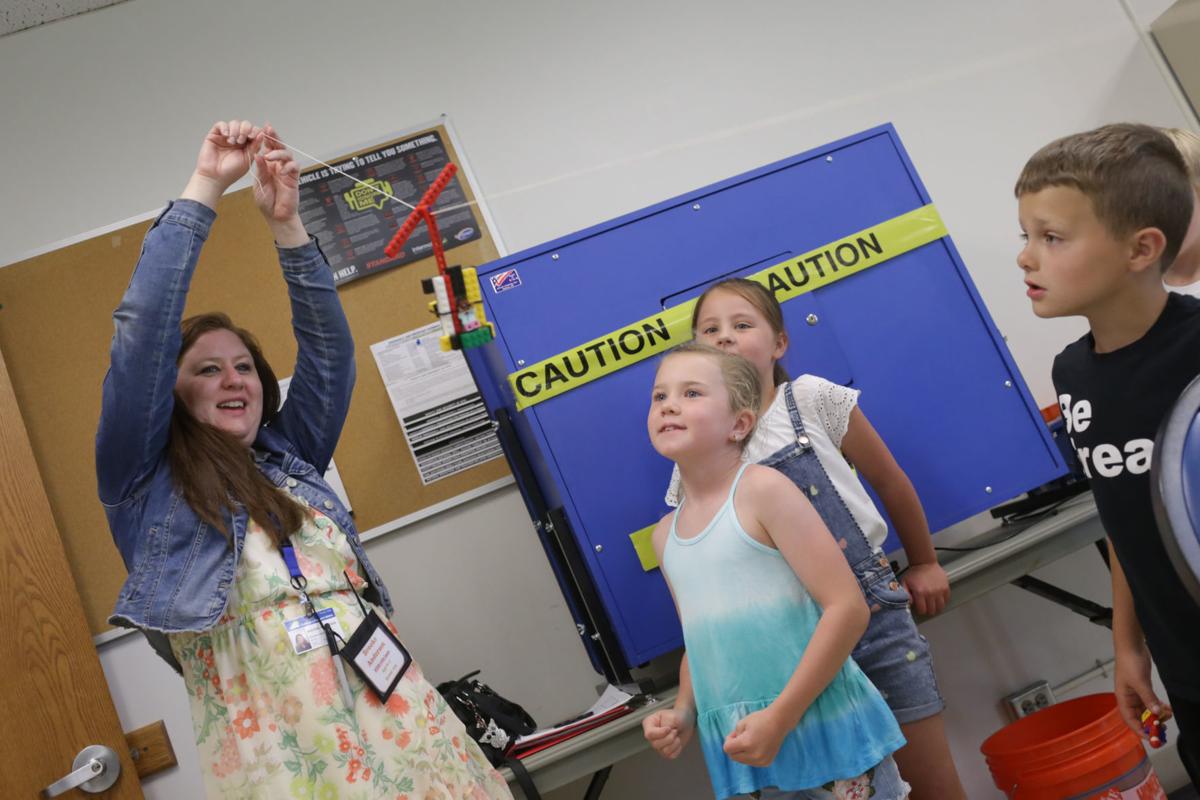 Brooke Anderson prepares to slide Ali Murray’s, in blue, LEGO craft down a zip line during a science, technology, engineering, and mathematics camp at College of Eastern Idaho on Monday, June 17, 2019. 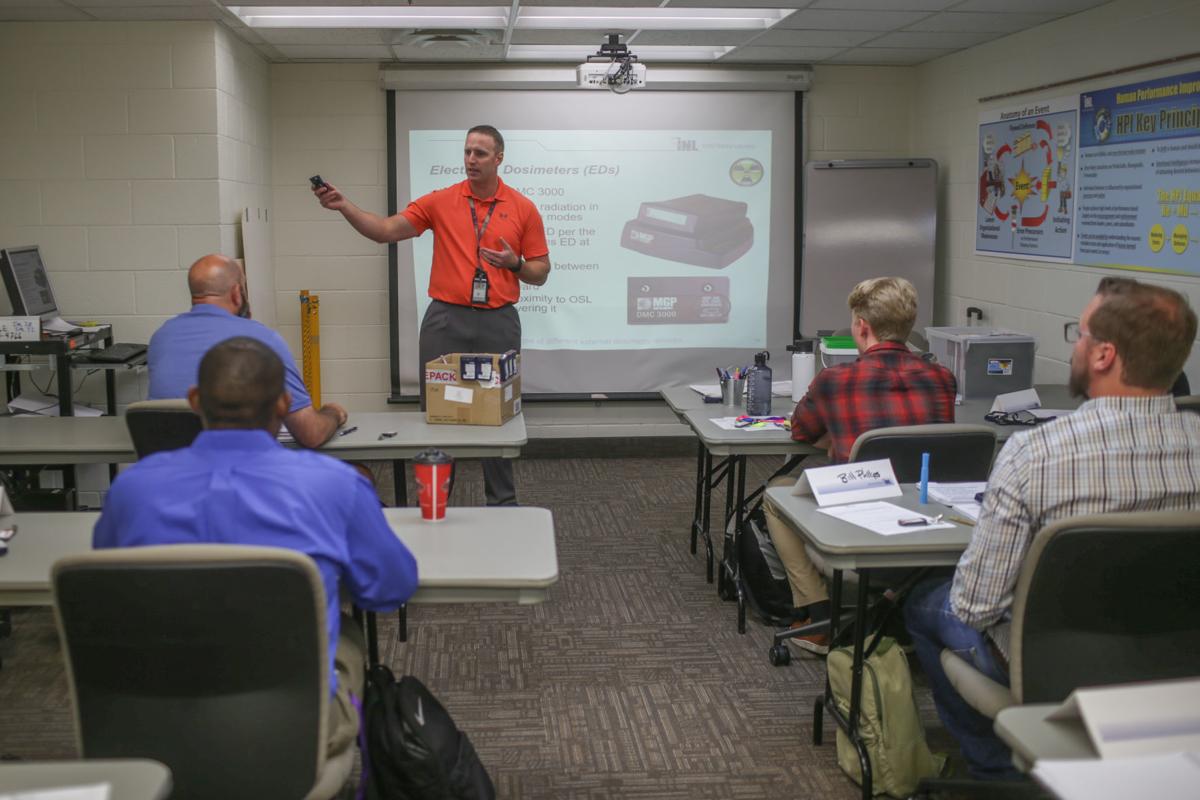 Brad Cole teaches students about electronic dosimeters during a radiation technology class at College of Eastern Idaho on Monday, June 17, 2019. 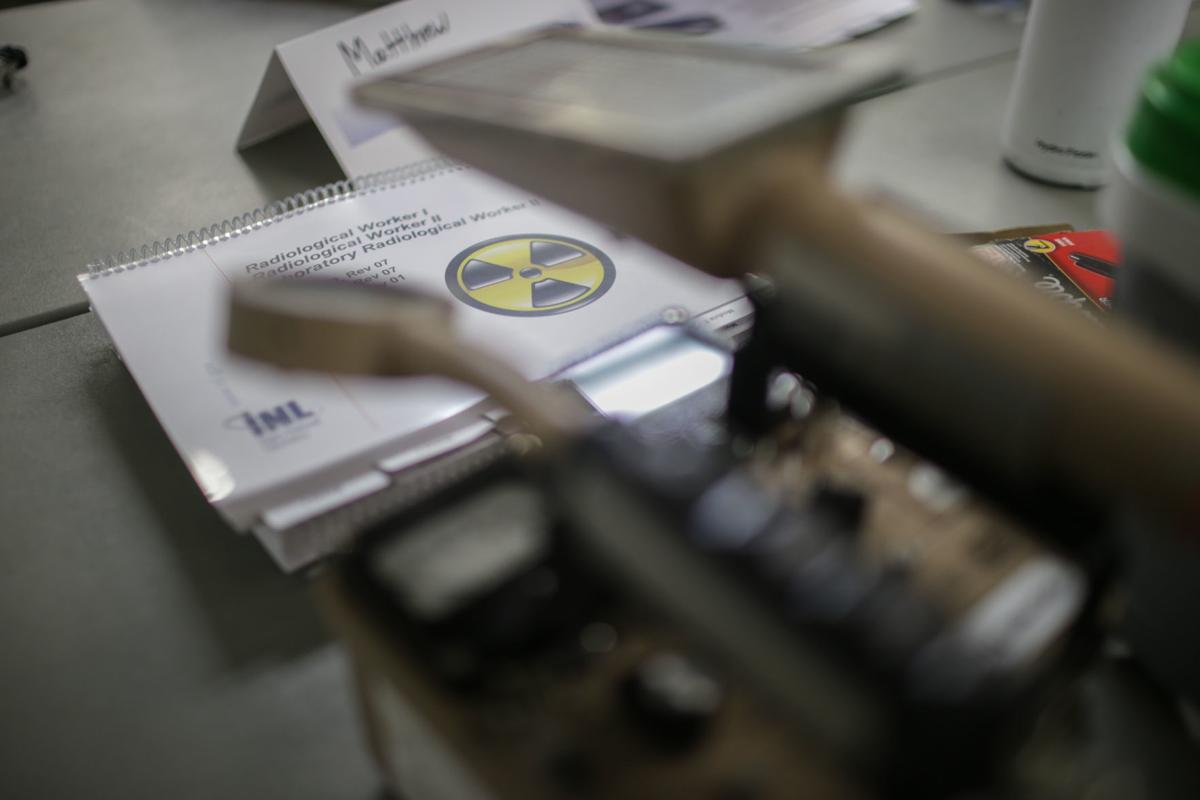 A radiation symbol is seen behind Geiger counters during a radiation technology class at College of Eastern Idaho on Monday, June 17, 2019.

Harley Wells, 9, works on an Ozobot project to learn coding during a science, technology, engineering, and mathematics (STEM) camp at College of Eastern Idaho on Monday, June 17, 2019.

Students learn how to use electronic dosimeters during a radiation technology class at College of Eastern Idaho on Monday, June 17, 2019.

Brooke Anderson prepares to slide Ali Murray’s, in blue, LEGO craft down a zip line during a science, technology, engineering, and mathematics camp at College of Eastern Idaho on Monday, June 17, 2019.

Brad Cole teaches students about electronic dosimeters during a radiation technology class at College of Eastern Idaho on Monday, June 17, 2019.

A radiation symbol is seen behind Geiger counters during a radiation technology class at College of Eastern Idaho on Monday, June 17, 2019.

Two weeks ago, some of the classrooms at the College of Eastern Idaho were filled with a younger cohort than you usually see.

A group of eight and nine-year-olds followed along as their instructor, Jennifer Barnes, showed them how to make the Ozobot, a little robot smaller at the base than an adult’s palm, follow tracks they drew with markers on pieces of white paper.

“He can follow colors that touch (each other) that tell him certain things,” Barnes said.

The children were at this year’s Summer Science Camp, which is meant to inspire interest in math, science and computers in the hopes they will continue with these pursuits as they get older and possibly go into a science-based career. They were using Ozo to learn the basics of coding, said Jennifer Lopez, special projects coordinator for CEI’s Workforce Training Center.

“Try blue, green, blue and see what he does,” Barnes said. “Try blue, red, blue. Try and see if you can make Ozo do something else other than just walk.”

In a classroom in another building across the courtyard, Brad Cole trained some of Idaho National Laboratory’s radiation technology workers on how to use their electronic dosimeters, a device you clip to your chest that measures radiation exposure. Make sure it’s calibrated correctly when you get it, he told them. Make sure it’s attached in the right spot. Check it frequently while you’re working.

While a science camp for children and a training program for existing INL employees might seem like very different things, they are related. Finding people with the right skills for certain positions such as nuclear engineers, systems engineers and cybersecurity experts is a problem faced by many employers, including INL.

“Trying to get the right talent into the lab is one of their highest (challenges),” Bob Boston, the U.S. Department of Energy manager of Idaho operations, told the Leadership in Nuclear Energy Commission in May.

And certification programs at CEI, training programs for current employees and efforts to get more children interested in science careers are all pieces of that puzzle.

“We’re all hands on deck when it comes to talent,” said Amy Lientz, INL’s director of stakeholder and education partnerships. “This is an important investment to us. It’s just as important as investing and putting a new roof on.”

INL has about 4,300 employees, while cleanup contractor Fluor Idaho, for example, employs 1,650 people. The lab is one of eastern Idaho’s major economic engines. According to a report INL released in February, the lab generated more than $2 billion in economic impact in 2018 and spent more than $148 million with Idaho businesses. Lab contractor Battelle Energy Alliance is Idaho’s sixth-largest private employer and ninth-largest employer overall.

A recent analysis of Fluor’s impact by Inform Economic Analysis said the company provided $814 million in benefits to Idaho’s economy in 2018 and is responsible for generating nearly twice as many jobs as it has employees.

High demand for certain jobs and low unemployment make some jobs tougher to fill than others, and INL tries to tailor its work with CEI to meet specific gaps. INL employees serve on advisory committees that help the college shape its programs toward the lab’s hiring needs, said Michelle Holt, CEI’s workforce training director.

“They’re keeping us apprised of what skills they’re looking for,” she said.

“It is difficult to capture those skilled employees because everyone is fighting for the same people,” she said.

Wade Bodlovic, INL’s manager of talent acquisition, said it can be a struggle “when you’ve got a high-demand asset that has a ton of opportunities in larger cities, and we’re trying to get them to Idaho Falls.”

The work at INL, Bodlovic said, is easy to sell as it is of interest to people in the field and gives them the opportunity to do important work related to energy and infrastructure.

“No matter what position we’re recruiting for, we’re selling that,” he said, even non-research jobs such as in finance or human relations.

However, Bodlovic said, potential recruits sometimes need to be sold on the location. People looking for jobs as, for example, cybersecurity researchers or malware analysts are in high demand. He said recruiters talk up the area’s low crime rates, outdoor recreation opportunities, relatively light traffic compared to many places, and the amount of money you will make at INL compared to the local cost of living.

Bodlovic said keeping people once they are hired isn’t an issue, but INL, like national laboratories nationwide and the nuclear industry in general, does have an issue with getting young people.

“We don’t have a problem with retention, but we do have an aging workforce,” Bodlovic said. “That will continue.”

Working with CEI on technical education programs that could help turn out new employees is part of filling these gaps. Some programs, such as one for radiation control specialists, exist now, and there are plans to expand them in the future. For example, the college is getting ready to launch a cybersecurity training program, which will help train people interested in one of the lab’s harder-to-fill positions, said Linda Montgomery, INL’s liaison to the college.

“We have a great need for those, because every time we get somebody good, our research side steals them to do cyber(security) research,” she said.

INL collaborated on a few programs with Eastern Idaho Technical College, which became CEI after Bonneville County voters passed a ballot measure in 2017. And, the lab has had longstanding relationships with Idaho’s universities. Idaho State University, for example, is developing a more advanced cybersecurity program, Montgomery said. However, she said there is a huge demand not only here but nationally for many of the positions INL is also struggling to fill.

“That helps a lot of our workforce needs, but it’s not our complete workforce,” Montgomery said.

CEI also hosts career training programs for current employees, such as an environmental safety and health recertification program and trainings to help them improve their Microsoft software skills.

“A single person might have multiple classes they take during a year related to environmental safety and health,” Holt said.

Lientz said it is too early to know whether CEI’s programs are directing more people to INL jobs, although the radiation technology program there has already yielded some employees for the lab and its subcontractors.

“I will say they’re making a great difference in terms of our partnership and what we see for the future,” she said.

Lientz said the workforce development and training programs at CEI are important too. She gave as an example the Nuclear Quality Assurance-1 certification program, which many of the engineers need not only at INL but also at the Naval Reactors Facility and cleanup contractor Fluor Idaho.

“It really is critical if we’re looking at building our small modular reactors” and microreactors, she said.

Ever-advancing technology makes it difficult to forecast exactly what INL’s employment needs will be in the future, Lientz said. Some of today’s first-graders will grow up to do jobs that don’t exist today.

“It’s not only understanding what it is that we have in front of us, but it’s also looking toward the future and what’s needed in the future,” she said. “And that is an ever-changing world.”

Bodlovic also said the lab tries to balance diversity in hiring with hiring people from the area.

“Critical to our future is developing that homegrown talent,” he said. “Yes, relocating people from the outside for a diversity perspective as well, and amping up our recruitment staff to meet those needs.”

Boston told the LINE Commission that employees from the area are more likely to stay than recruits from elsewhere.

“When we bring in local talent, they tend to stay a much higher percentage,” he said.

May marked the 18th consecutive month that Idaho’s unemployment rate fell at or below 3 percent.