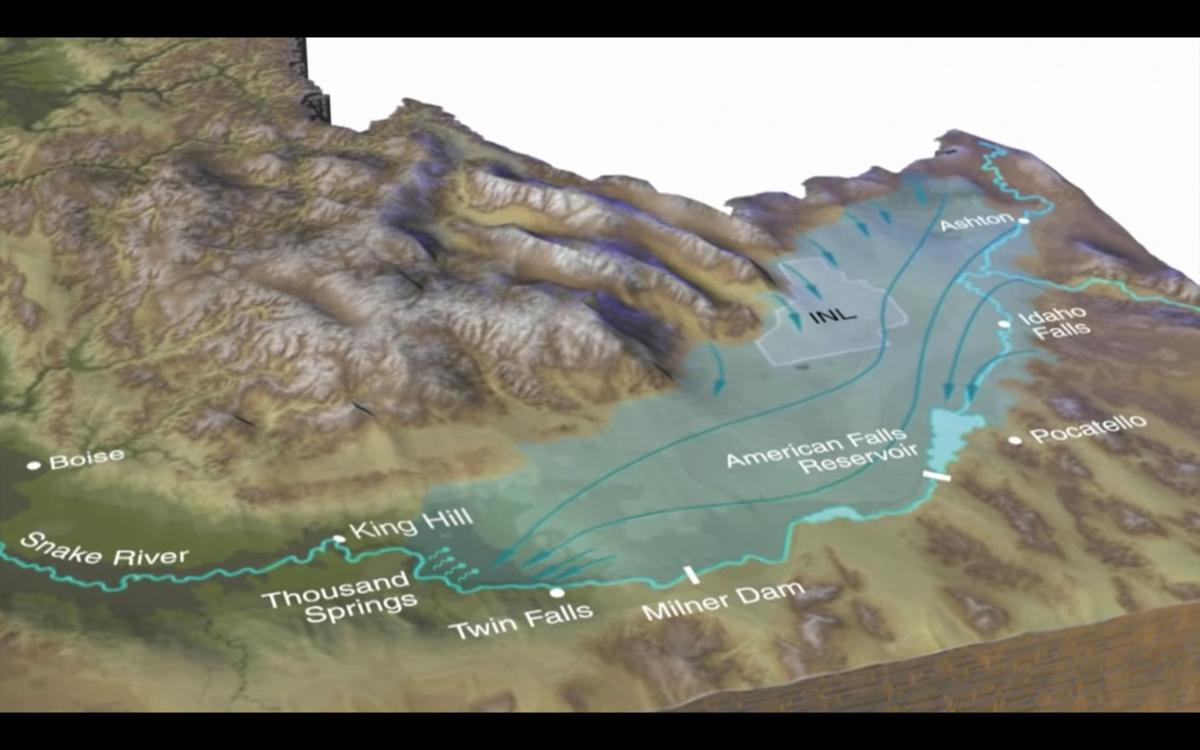 A screenshot from the INL film UNDERSTANDING RADIOACTIVE WASTE AND RESEARCH MATERIALS AT INL shows the Snake River Aquifer and Idaho National Laboratory. 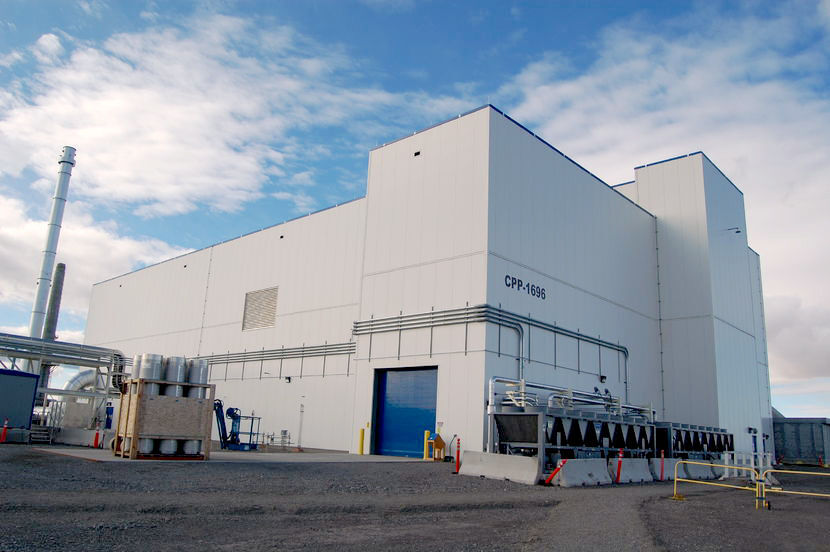 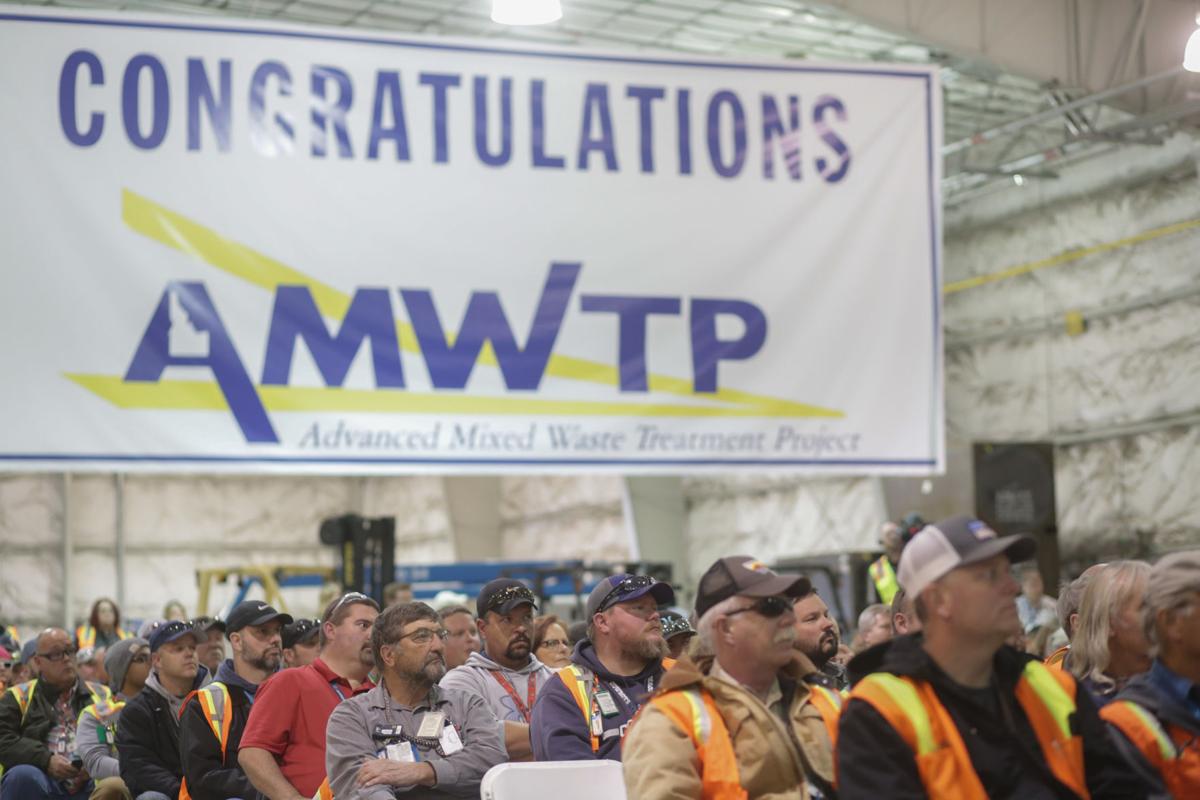 Fluor Idaho employees listen to Fred Hughes, Fluor Idaho president, thank them for their work at the Advanced Mixed Waste Treatment Project facility near Arco on Thursday, Oct. 10, 2019. With 1,000 cubic meters of debris left, AMWTP will be done processing debris waste and will start the closure process in November, according to Bryan Breffle, director of the Waste Management and Radioactive Waste Management Complex. 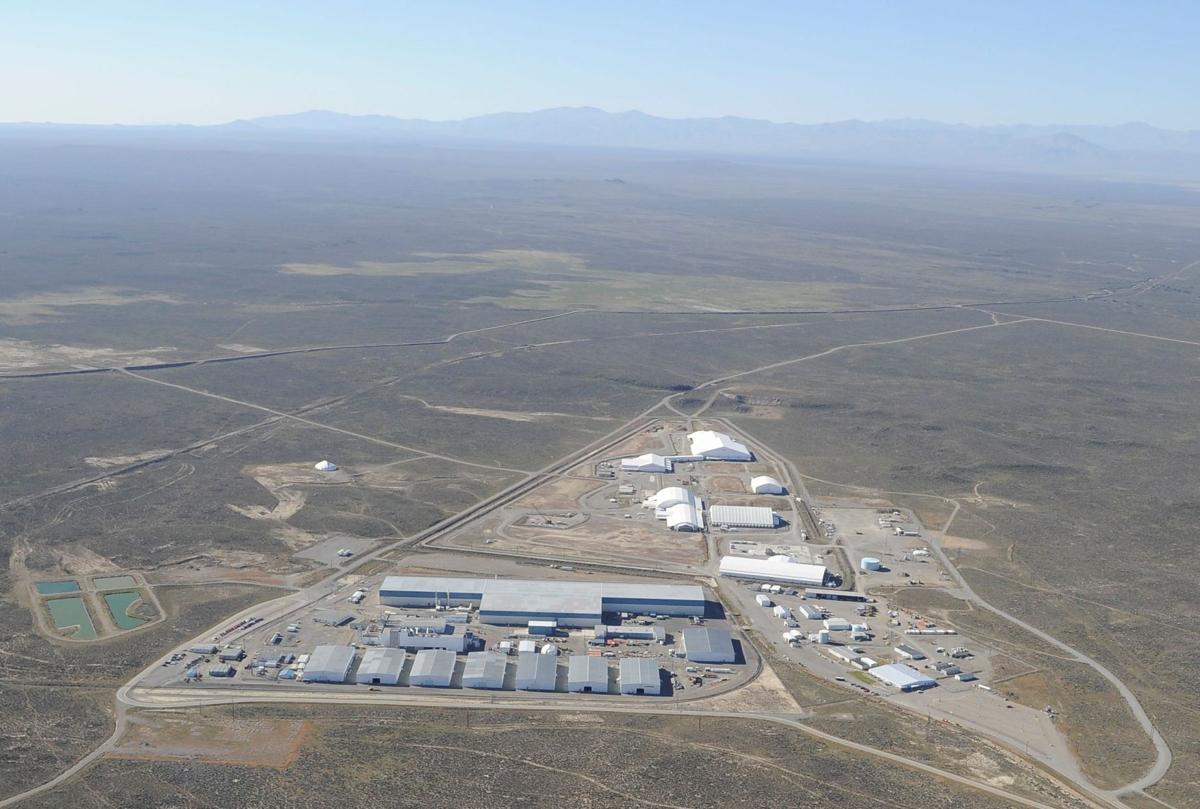 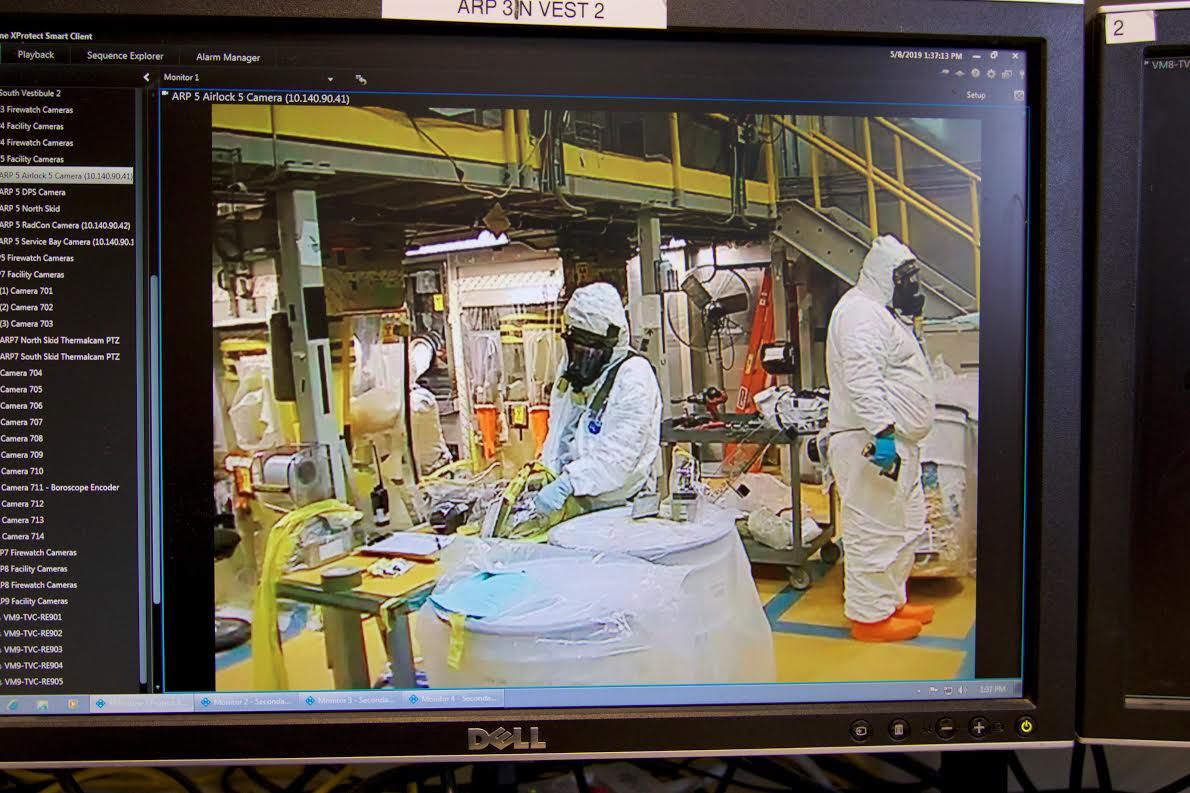 A screenshot from the INL film UNDERSTANDING RADIOACTIVE WASTE AND RESEARCH MATERIALS AT INL shows the Snake River Aquifer and Idaho National Laboratory.

Fluor Idaho employees listen to Fred Hughes, Fluor Idaho president, thank them for their work at the Advanced Mixed Waste Treatment Project facility near Arco on Thursday, Oct. 10, 2019. With 1,000 cubic meters of debris left, AMWTP will be done processing debris waste and will start the closure process in November, according to Bryan Breffle, director of the Waste Management and Radioactive Waste Management Complex.

The Idaho Cleanup Project contract, worth approximately $6.4 billion over a 10-year period, was awarded to Idaho Environmental Coalition, a joint venture between Jacobs Technology Inc. and North Wind Portage. IEC won the contract on May 27, beating out Fluor, which has held the contract since 2016.

The current 1,900 employees on the project will continue to work on the cleanup, but five senior staff members of Fluor will be replaced by staff from IEC, according to Ann Riedesel, Fluor director of communications. “The way the RFP (request for proposals) that DOE put out, the new contractor will assume the vast majority of the employees. There are a handful of senior staff that won’t transition over,” said Riedesel. “... We’ll try to make it as seamless as possible for the employees.”

The Department of Energy Office of Environmental Management determined the Idaho Environmental Coalition proposal provided the best value to the government considering key personnel, past performance, management approach, and costs, resulting in a new contract with a team able to achieve measurable results toward completion of the mission at the Idaho National Laboratory Site, according to an email response from a DOE spokesperson. Fluor, as well as the four other unnamed contractors that bid on the project, have the ability to protest the decision which would give the United States General Accounting Office 90 days to respond, according to a person familiar with the talks.

Riedesel said Fluor has not decided whether they will protest the decision.

Jacobs Technology Inc., based in Tullahoma, Tennessee, has been a part of the Rocky Flats Closure, Hanford Plateau Remediation and West Valley Decommissioning according to their website. North Wind Portage, an Idaho Falls-based company, has been part of the Idaho Cleanup Project since 1997.

History of the Idaho Cleanup Project

The Manhattan Project to develop nuclear weapons and the Cold War-era during which many were produced left a legacy of waste and contamination.

Under the environmental standards of that time, Idaho National Laboratory had affected the quality of the Snake River Plain aquifer water. INL injected contaminated wastewater directly into the aquifer leading “to contamination of the groundwater below some areas of the INL with heavy metals, chemicals and radioactive elements,” a DOE statement read.

Over 40 years, the U.S. Navy and commercial nuclear facilities sent their fissionable materials – material that can maintain a nuclear reaction – to INL. The lab recycled $1 billion worth of uranium and generated 3.5 million gallons worth of liquid radioactive waste from this material, according to an INL film about the cleanup.

Used nuclear fuel, also known as spent fuel, came to the state from government and university research as well as part of the U.S. policy of nonproliferation. The spent fuel, in the form of metallic plates and rods, is stable and relatively easy to store safely in containers.

All of this waste, historical disposal practices, and the potential for Idaho to become the nation’s dumping ground for nuclear waste began to raise the hackles of Idaho residents and legislators.

On October 16, 1995 the Settlement Agreement was signed by then Gov. Phil Batt and the federal government. This agreement prevented shipments of spent nuclear fuel to the INL for permanent storage, required removal of various forms of transuranic waste from Idaho, required DOE to treat and remove certain high-level waste streams from the state, and required the transfer of spent nuclear fuel from wet storage into dry storage, according to the Idaho Department of Environmental Quality website.

A 2006 stand-off between Gov. Butch Otter and the federal government ensured the cleanup of buried transuranic waste at INL as well.

Bechtel and BWX Technologies had the original oversight contract, but DOE switched to a project-oriented contract for the long-term cleanup, according to Post Register reporting in 2005.

In 2005, CH2M-WG, a joint venture between CH2M HILL and Boise-based Washington Group – Washington Group was a subsidiary of Battelle Energy Alliance, which operates INL – won the first Idaho Cleanup Project contract, worth $2.9 billion. Jacobs also bid on the original contract according to a Post Register article from the time.

CH2M-WG was fined $27,000 in 2007 for radiation safety and quality improvement deficiencies identified during a May 2006 DOE assessment of radioactive waste processing activities at the Accelerated Retrieval Project at the Idaho National Laboratory, according to a DOE letter to the company. “Of concern in this case was the safety culture problems indicated by an employee’s fear of retaliation for raising safety issues and the emphasis on production over safety, as identified during the DOE-ID assessment,” the letter said. The DOE extended CH2M-WG’s contract for three years at $730 million in September of 2012.

CH2M-WG managed to do some of the cleanup they were hired for but the company was never able to get the $571 million Integrated Waste Treatment Unit up and running. The IWTU was intended to convert 900,000 gallons of liquid sodium-bearing waste into a powder that can be stored in containers more safely off-site.

Fluor took over the Idaho Cleanup Project in June, 2016.

IEC will take over the project in October, 2021.

Where Fluor stands currently with the cleanup

Riedesel says 95% of the spent fuel storage basin is now empty and has been converted from wet to dry storage, making the project one year ahead of schedule. But it is still years from completion.

The .34 acres of waste at the Accelerated Retrieval Project at the Radioactive Waste Management Complex is slated to be completed at the end of this year but will be handed off to IEC. Other buildings at the complex still need to decontaminated, demolished, and covered with an earthen cap to prevent rainwater from seeping into the ground, according to Riedesel.

As for the IWTU facility, that has now reached a cost of $1 billion and that was a challenge for CH2M-WG, progress is debatable. The company has never had a successful run with nuclear material. In 2019, Fluor executed a successful 50-day demonstration run using simulant. In 2020 they disassembled and then reassembled the facility, adding new filters. This outage was extended by the COVID-19 pandemic but should be completed in the next several months for another 50-day run. In theory, giving the new contractor, IEC, the ability to work with DOE on the final demonstration and start processing the materials for storage.

Fluor’s highlights and what it should be remembered for

Riedesel says that Fluor should be remembered for its innovative work with IWTU. “Our team really looked at what the issues were and came up with a plan on how to solve them … they methodically solved each one of the issues and got the facility to a point where it will run successfully.” Additionally, Fluor has contributed more than $1.3 million to area education initiatives and non-profit organizations.