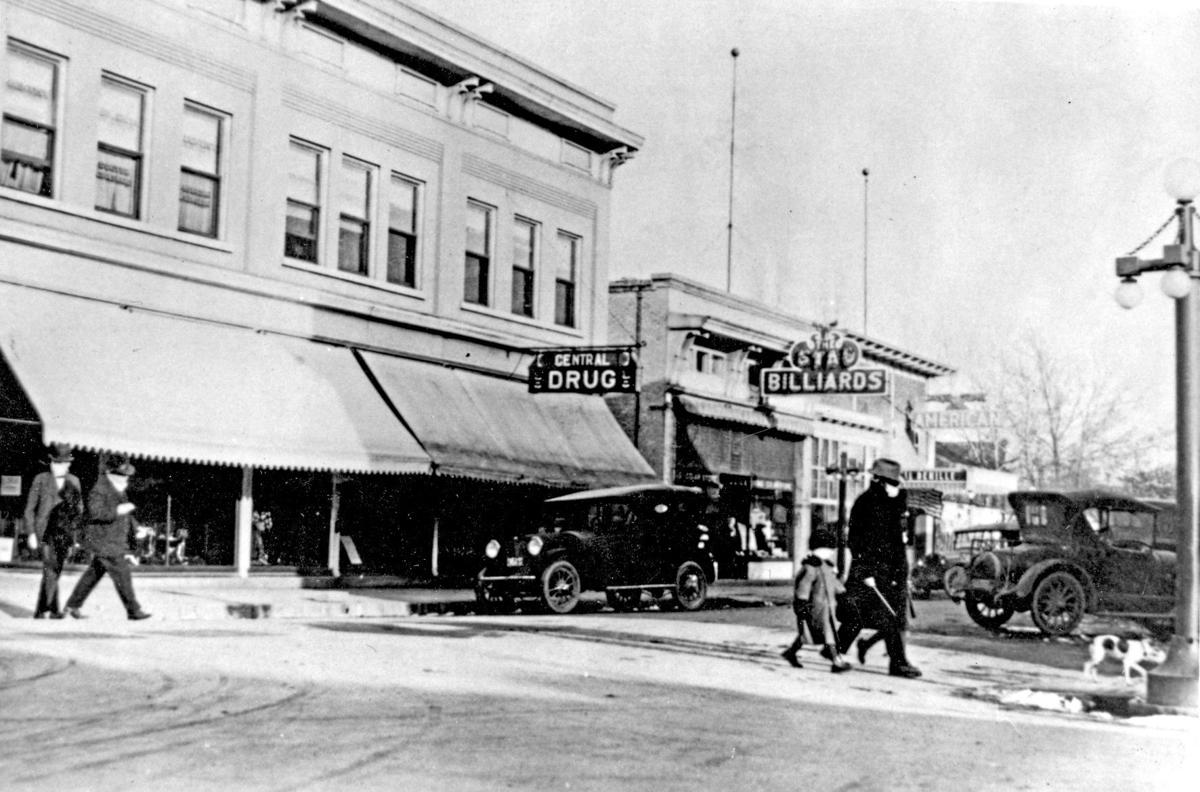 Three men and a child, all wearing masks to prevent the spread of the Spanish flu, are seen crossing the street at the intersection of Park and A streets in Idaho Falls. 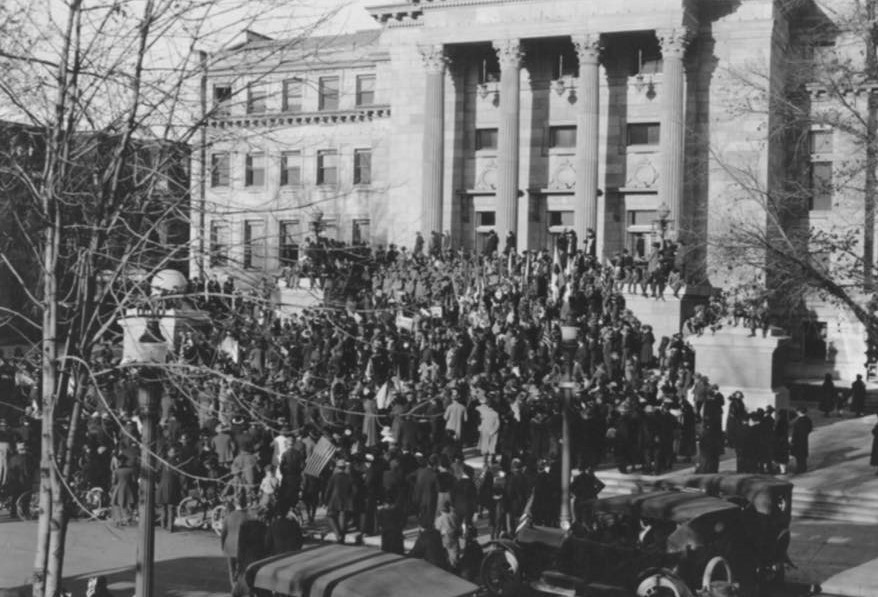 When Boise celebrated the end of the Great War on Nov. 11, 1918, it was a dangerous gathering in the midst of the Spanish flu epidemic that killed millions. 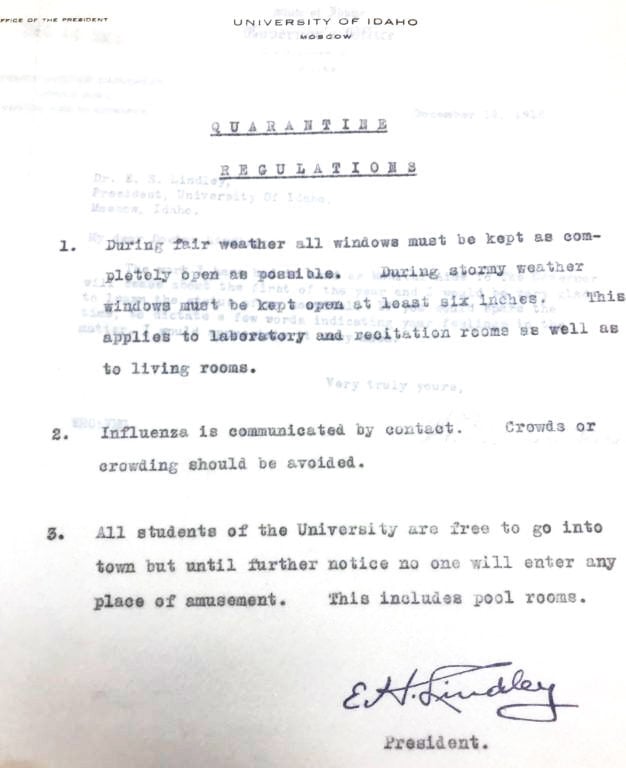 A document outlining quarantine regulations at the University of Idaho in Moscow during the Spanish flu. 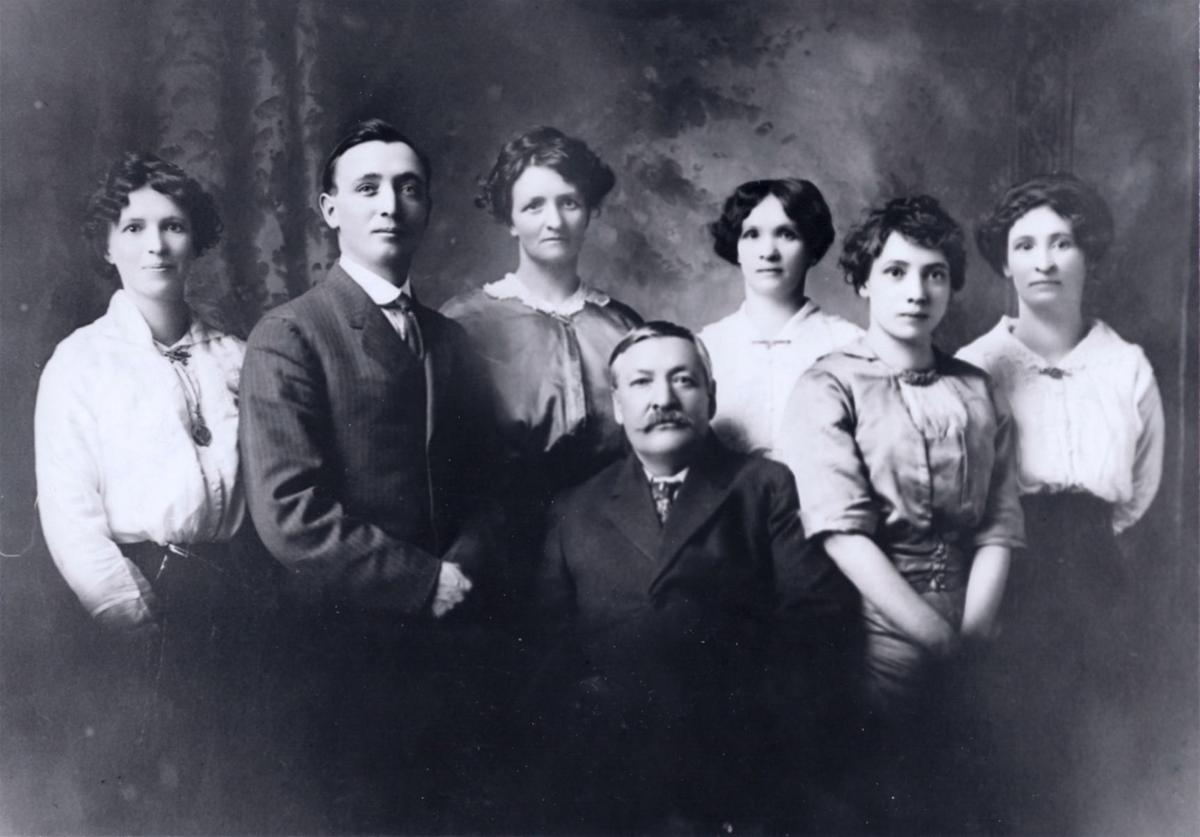 The family of Charles C. Myler faced tragedy when Charles’ eldest son lost his own son to the Spanish flu, the first Pocatello death, and Charles himself died of the same flu a month later. 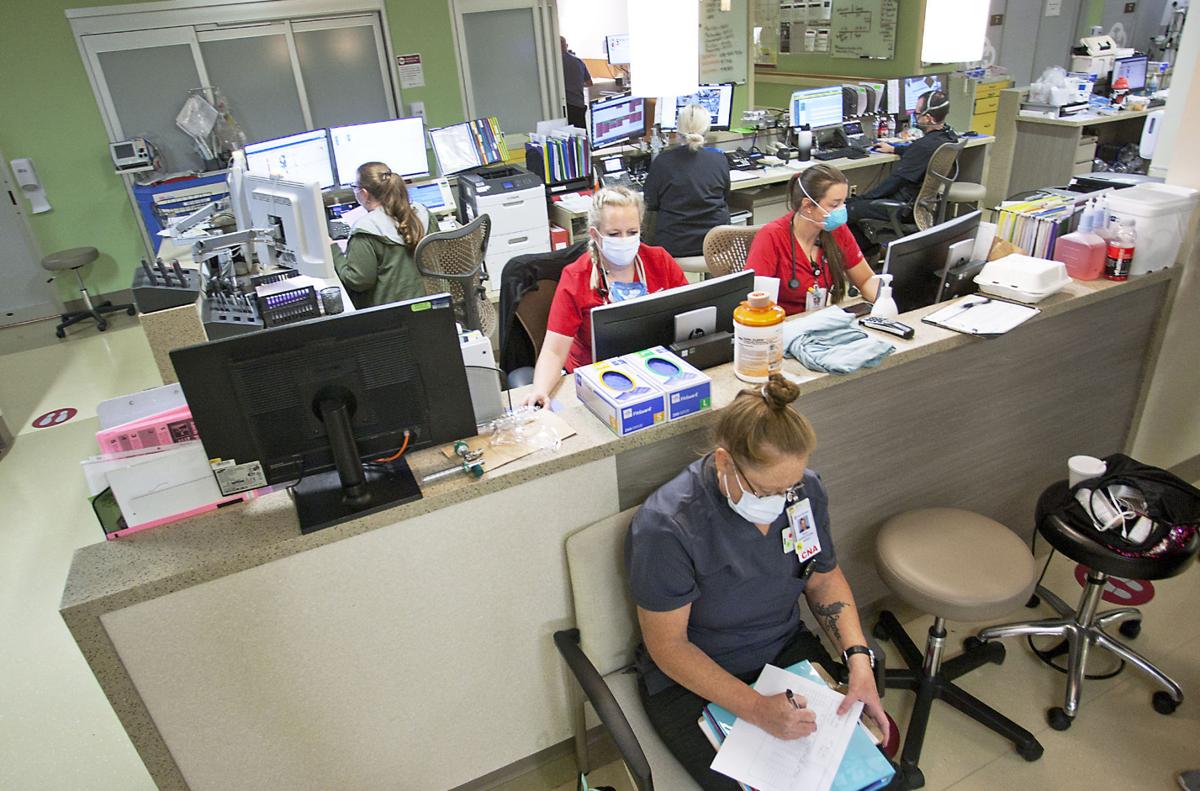 Caregivers gather in and around the nurses station in the emergency department at Saint Alphonsus Medical Center in Nampa on Sept. 16. 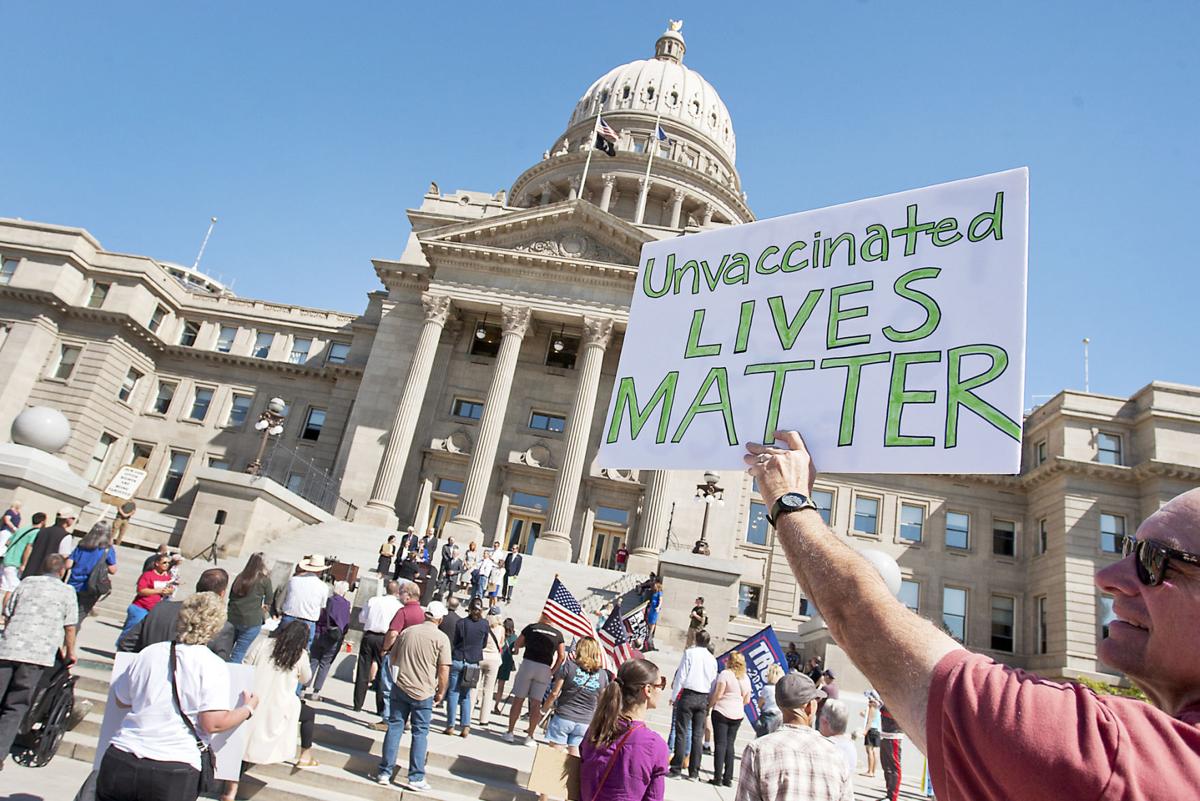 People show up in support of a group of Idaho legislators gathered on the steps of the Idaho State Capitol on Sept. 15. The group of state representatives were calling for fellow legislators to come to town in an effort to convene themselves into session on vaccine mandates.

Three men and a child, all wearing masks to prevent the spread of the Spanish flu, are seen crossing the street at the intersection of Park and A streets in Idaho Falls.

When Boise celebrated the end of the Great War on Nov. 11, 1918, it was a dangerous gathering in the midst of the Spanish flu epidemic that killed millions.

A document outlining quarantine regulations at the University of Idaho in Moscow during the Spanish flu.

CANYON COUNTY — Christmas and New Years were quiet affairs in Nampa in 1918, since the influenza ban prevented any public gatherings.

Nowadays, during the second pandemic in the last century, Idaho is anything but quiet. People have protested outside a hospital in North Idaho as patients die inside during a Crisis Standards of Care initiative, the first in state history. There were similar disagreements and conflicts during the previous pandemic, however, the state faces new challenges now, experts said.

“That there is some fear of the Spanish influenza becoming epidemic in Idaho is shown by the fact that the State Board of Health held a (meeting) in Boise Tuesday,” read the Nampa Leader-Herald on Oct. 11, 1918. “And after (considering) the matter decided to close all places of public meeting against schools.”

It is unclear where the Spanish flu came from, however, the first known case in the world was reported in Kansas on March 11, 1918. Because of wartime censorship, however, cases were not reported in the newspapers of any country at war. Spain, however, remained neutral throughout World War I, so its journalists were allowed to report on cases, leaving many to believe that was the Spanish flu’s origin.

The Spanish influenza was one of the deadliest pandemics in history, lasting for the most part from Spring 1918 to Summer 1919. The disease infected around 500 million people worldwide, which at the time was around a third of the planet’s population. Somewhere between 20 million and 50 million people died.

The United States recently passed the death toll from the 1918 pandemic. More than 700,000 people have died of COVID-19, around 30,000 more than the Spanish flu killed, though the country’s population is more than three times larger now. The coronavirus pandemic took hold in the U.S. in March 2020 and continues today.

All told, she said, her calculations show more than 2,300 deaths in Idaho from the Spanish influenza. COVID-19 has killed more than 2,800 Idahoans, according to the state’s COVID-19 dashboard, though more than four times as many people live in the state now as did in 1918 when the state had just over 400,000 residents.

“It kind of spread out in circles from the first places that it started, so it kind of formed out up north,” Floerchinger-Franks said of the 1918 outbreak in Idaho. “That little strip of counties that run across the center of the state … the mountainous ones, that’s the last place we saw it.”

Many of the same or similar public health measures seen now were in effect in 1918 as well, Floerchinger-Franks said, including limits on who and how many people could enter stores, which had to close at 6 p.m.

“They were strict about it then,” Floerchinger-Frans said. “Here, it doesn’t seem like there are any consequences. But back then if you were a businessman and people came in that weren’t supposed to, they would arrest you. They didn’t fool around.”

On March 25, 2020, Gov. Brad Little issued a statewide stay-home order and signed an extreme emergency declaration. The order required citizens to “self-isolate at home if you can, not just if you are sick.” He later extended it through April 30.

That stay-home order, which is among the least restrictive that any state put in place, became fodder for his opponents. Some, including Lt. Gov. Janice McGeachin, are running for office on the promise of no restrictions. McGeachin, who is challenging Little in the 2022 election, temporarily banned mask mandates in May while Little was out of state, a move he rescinded the next day.

In 1918, Idaho officials were not immune from criticism against the public health measures. People opposed the health board’s order from Oct. 8, 1918, to close all public meeting places because few cities out East took similar measures. Some Idahoans thought the orders were premature.

“(Those opposed) also feel that if there be real danger that schools as well as churches and other places should be closed,” the Nampa Leader-Herald reported on Oct. 11. “It looks now as though the proprietors of picture houses, church officers and others would unite for a modification of the order to the extent that those public places be not closed till a case of the influenza has appeared in any given community.”

The federal government had sent the head of the state board of health to Idaho, Floerching-Franks said, and several cities and counties fought him on his orders.

“It was acrimonious,” Floerching-Franks said. “Boise city, they really, really disliked this guy from the federal government … they were really against him and they took him to court.”

Boise also changed its city’s board of health membership, from eight or nine people down to three, all of whom did not want federal government mandates, Floerching-Franks said.

Similarly, leaders in Ada, Boise, Valley and Elmore counties recently appointed Dr. Ryan Cole to the Central District Health Board. Cole has spread misinformation about COVID-19 vaccines, which experts have said are safe and effective. The Idaho Legislature also passed SB 1060 this year, which gives county commissioners more power over public health districts. The law makes it so if the district board of health makes an order applying to everyone in a county or public health district, the county commissioners will make the final decision on the order.

In 1918, other cities and counties besides Boise were serious about the pandemic. In Payette County, for example, train stations weren’t allowed to sell tickets, Floerching-Franks said.

“If you came into Payette County and you weren’t from there, you had to be quarantined for 48 hours,” she said. “Down around (Salmon), they quarantined the city, and they put guards around the city to make sure no one came in. They would stand out there with their guns.”

In eastern Idaho, Idaho Falls city officials restricted the number of shoppers who could enter a business at any one time to equal the number of clerks on duty, according to Idaho Falls newspaper archives. The hope was that by limiting human interaction, it would lower the chances of spreading the virus.

Idahoans also had concerns beyond the Spanish flu pandemic as it was starting. The United States had recently joined World War I and Americans were focused on buying bonds, conserving materials and the soldiers sent abroad to fight.

And as the surge continued, more drastic measures were taken. On Oct. 22, 1918, the state health board closed all schools. The original order had left schools open but from Oct. 11 to Oct. 22, Idaho had gone from 30 to 1,200 cases.

“It having come to the attention of the state board of health that certain physicians in various parts of the state, from motives unknown at the present time to the board, unpatriotically refrain from reporting cases of epidemic influenza,” the order read. “It is deemed necessary to close all public and private schools.”

The Nampa Leader-Herald reported deaths on its front page, but expressed the outlook was not grim.

Even the paper’s staff fell ill at one point.

“The influenza has hit the Leader-Herald office to the extent of leaving one well person in the mechanical end,” staff wrote. “This has compelled the omission of news, correspondence and advertising.”

On Nov. 5, 1918, the Leader-Herald wrote of death taking a “heavy toll” as six in Nampa died of influenza. The day would be “long remembered” in sadness, the paper predicted.

The same day, the paper reported that an Idaho university’s Students Army Training Corps members were required to wear masks indoors, “under penalty of court martial.” The masks had to be washed in “good soapy water” daily.

Many of the preventative measures have not changed over the last 100 years. While some may think it’s because science hasn’t advanced, it’s actually because those measures worked then and do now, according to Boise State University Associate Professor Bob Reinhardt.

People 100 years ago also lived in a very different and more dangerous disease environment, Reinhardt said. In 1918, people had more direct experience with diseases, which started off relatively harmless and became more perilous.

Nowadays, the world is “blessedly free” of many diseases, Reinhardt said. Almost everyone 100 years ago knew of someone who had died from a disease.

“We have (advanced),” he said. “We developed a vaccine in record breaking time … They had no vaccine against the flu. They didn’t have many vaccines, actually, in 1918.”

The answer, striking though uncertain: “Probably.”

Around the same time, 102 years later, Idaho is facing another COVID surge with no end in sight. Well over a year into the pandemic, hospitals have been asked to conserve oxygen and face physical difficulties in pumping oxygen to patients. Some mothers with COVID are giving birth to stillborn fetuses, for no apparent reason other than the coronavirus disease.

Recently, the Idaho Department of Health and Welfare compiled a model projecting the state could have a worst-case scenario with a peak of 1,900 hospitalizations and 305 deaths in one week in late November.

“I do not have any idea how we’ll handle that if we get to those levels,” Pate said. “We may not have seen the worst of this.”