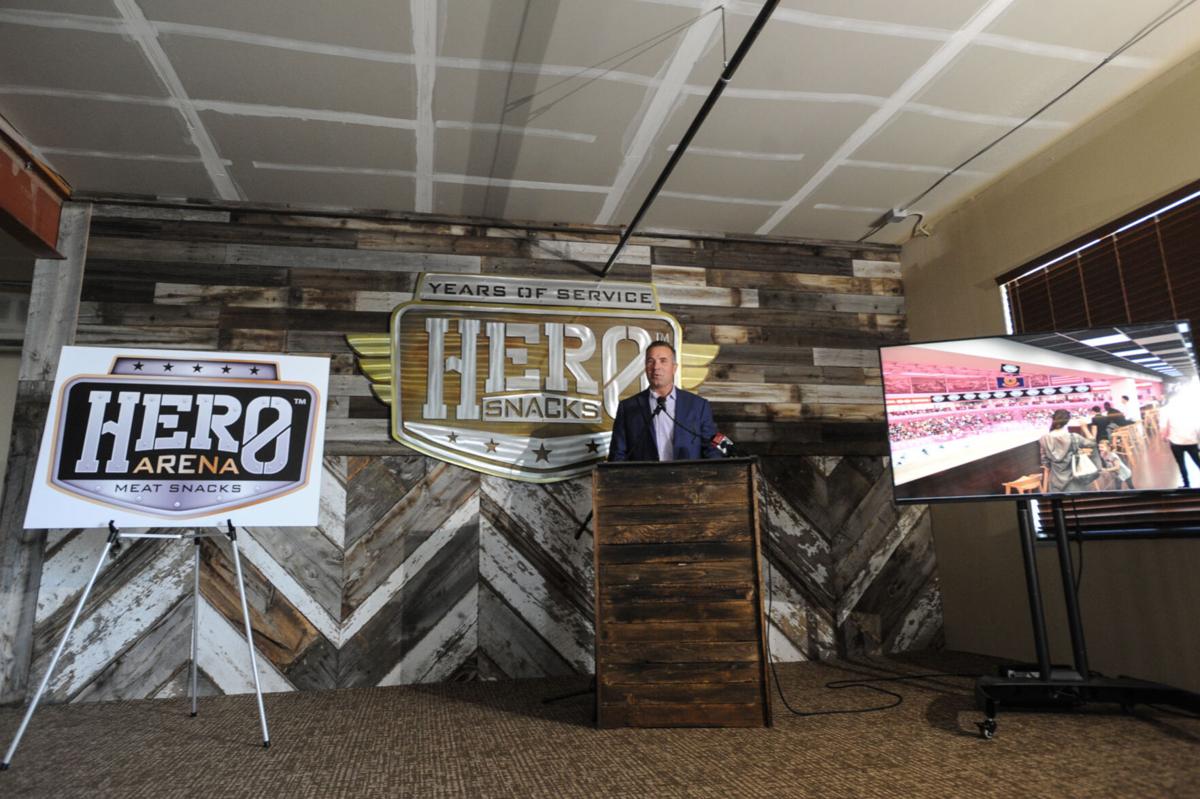 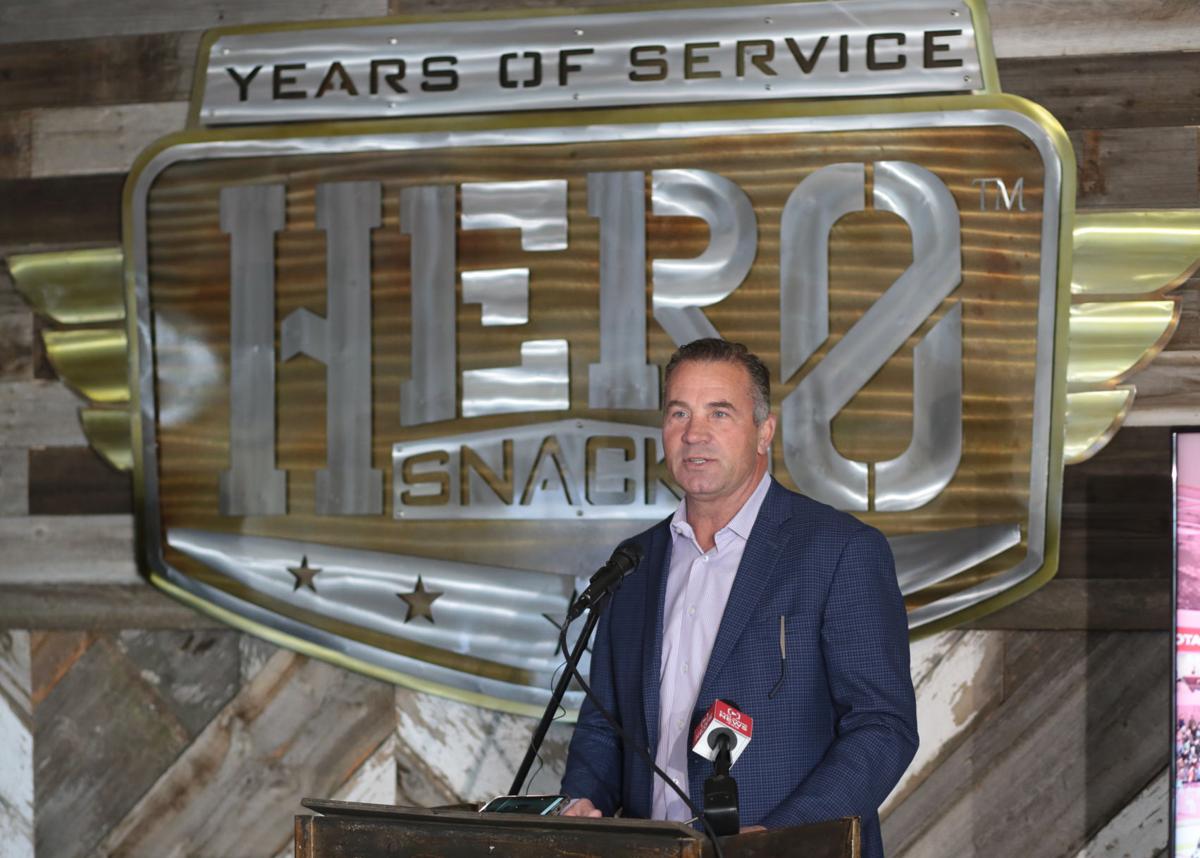 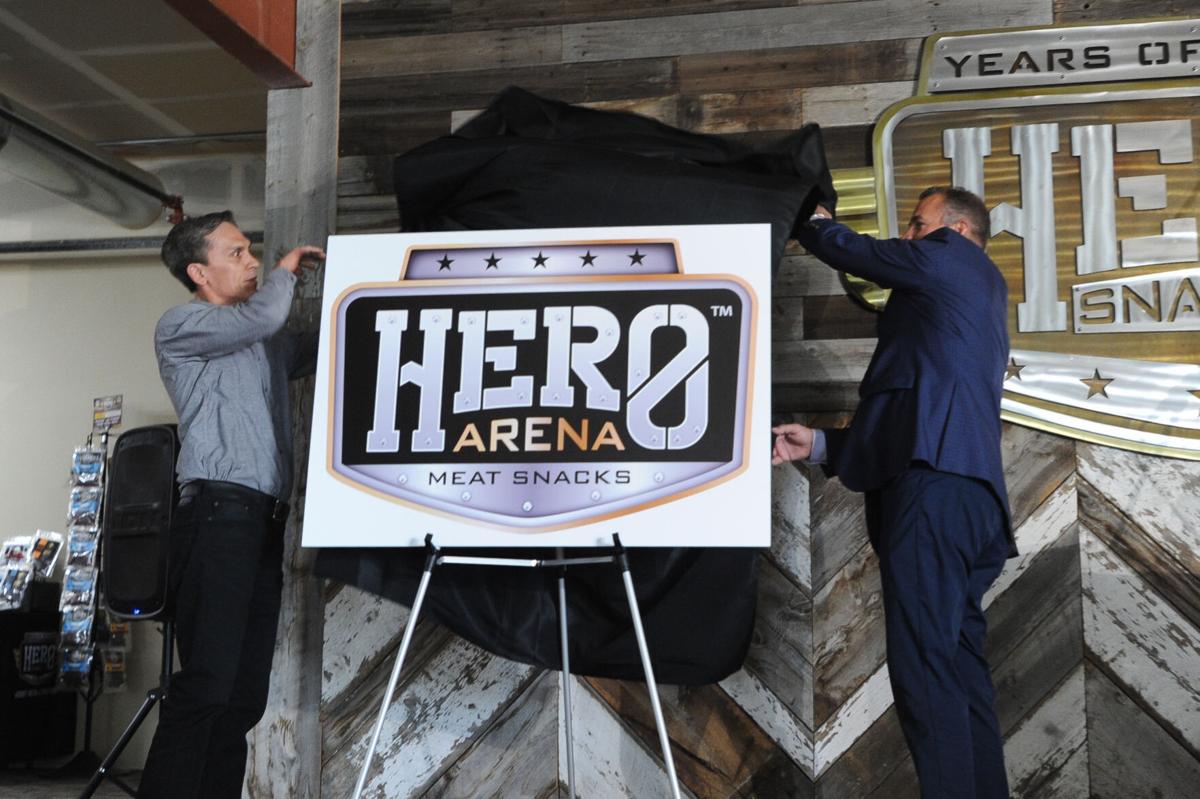 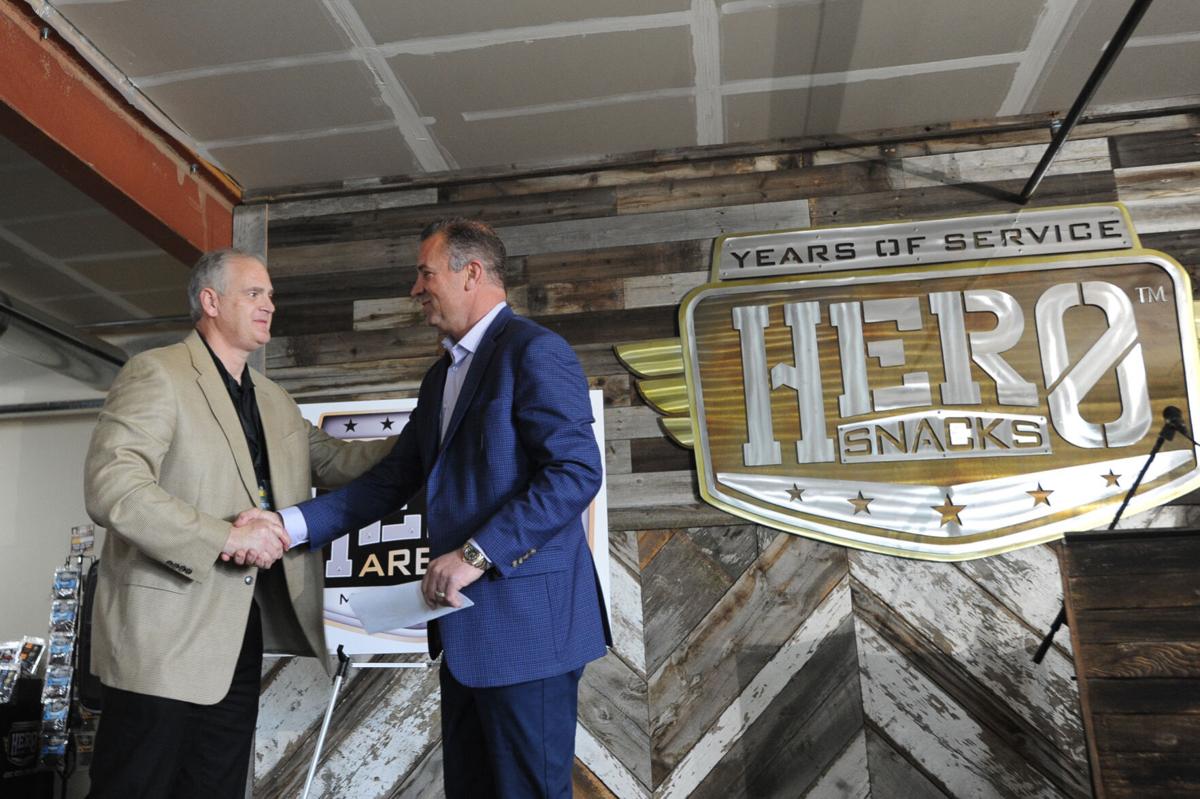 Auditorium District Executive Director Rob Spear and Ben Ball, president of Golden Valley Natural, shake hands after the announcement of the naming of the Hero Arena in the Mountain America Event Center at a press conference at Golden Valley Natural on Monday, May 3, 2021. 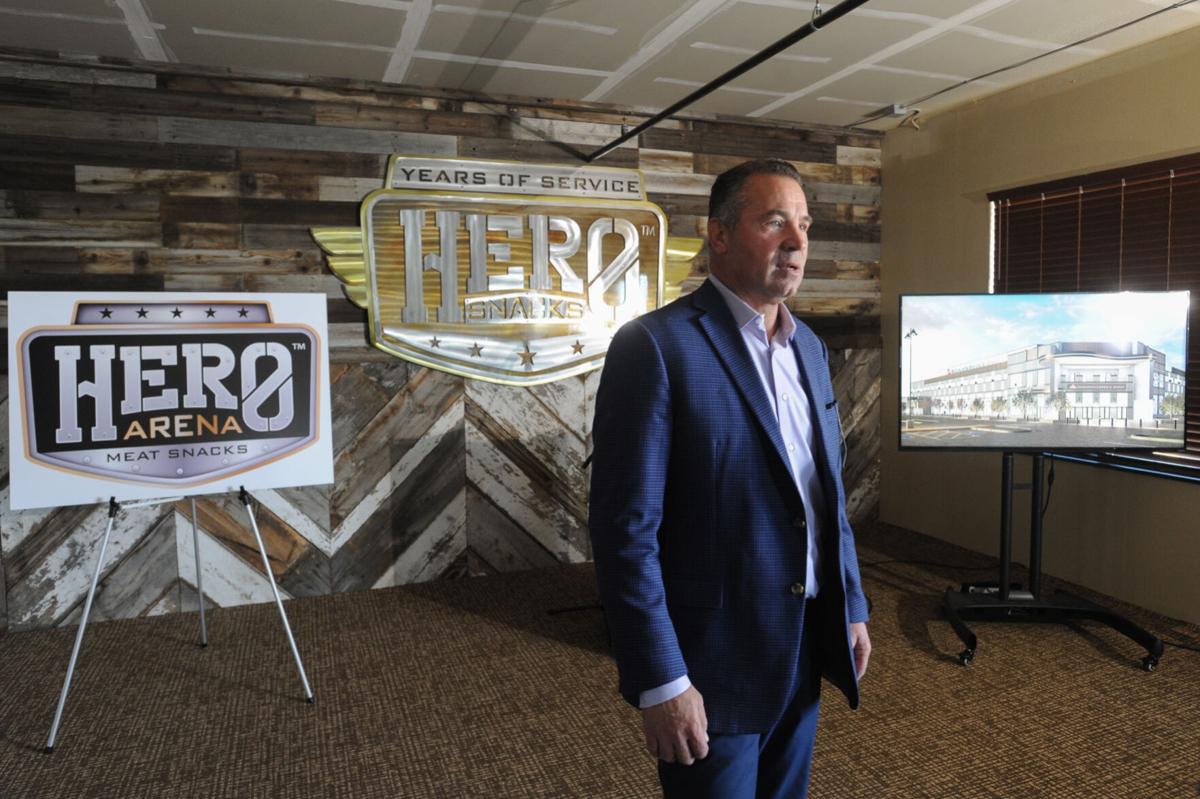 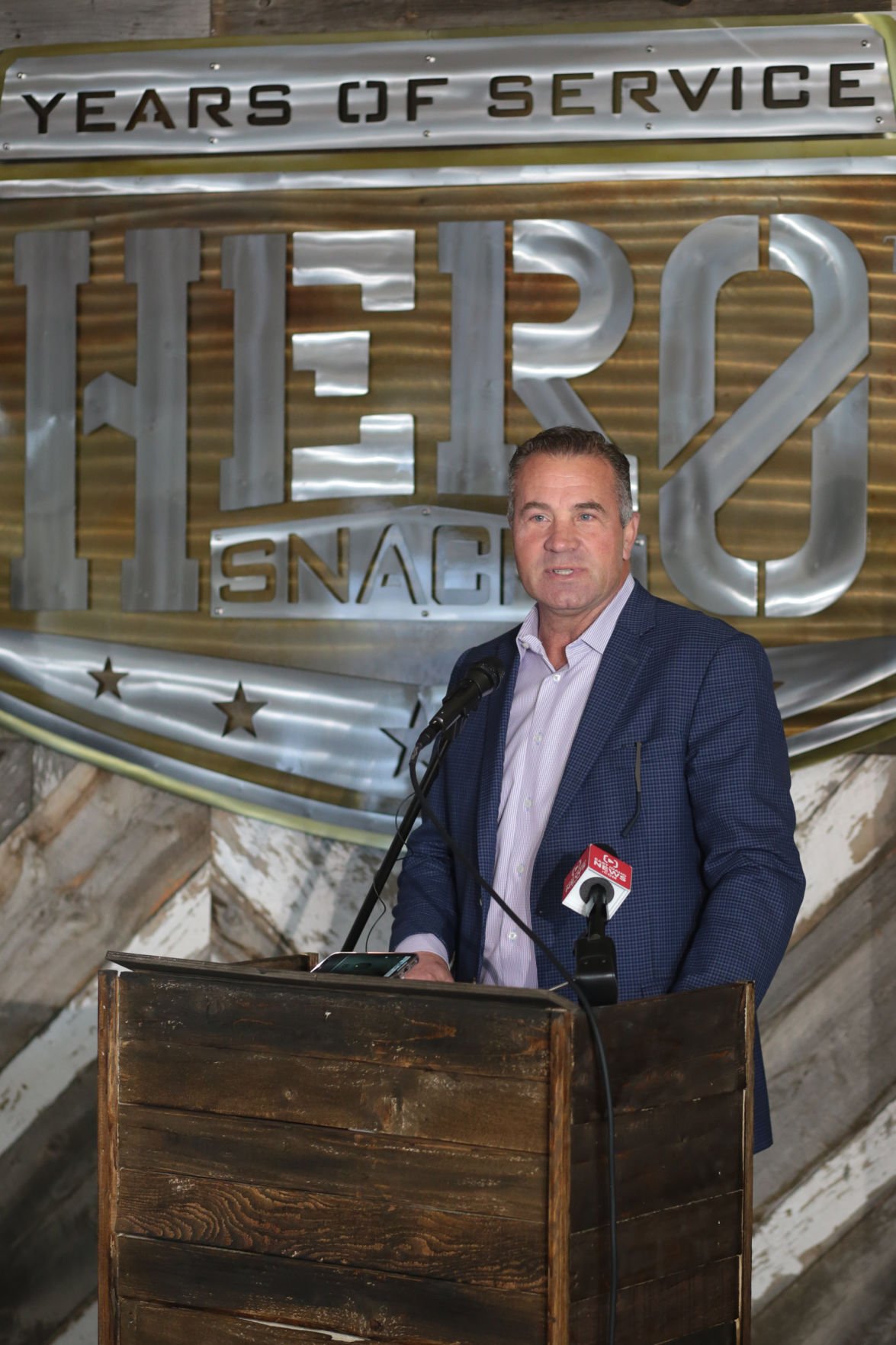 Auditorium District Executive Director Rob Spear and Ben Ball, president of Golden Valley Natural, shake hands after the announcement of the naming of the Hero Arena in the Mountain America Event Center at a press conference at Golden Valley Natural on Monday, May 3, 2021.

SHELLEY — Two local businesses, Golden Valley Natural and Bingham Healthcare, have made large donations to the Mountain America Event Center. The donations may be the final push the project needs to get off the ground.

The Golden Valley Natural donation was one of the largest the project has seen. The company announced it was gifting $2 million at a press conference held Monday morning.

“We are excited about the jobs this new event center will provide our community and the economic impact that it will have. Sports competitions, concerts, and other events will draw in patrons from around the region and state. We hope it will be a center that all east Idaho families flock to,” said Ben Ball, president of Golden Valley Natural.

In exchange, Golden Valley Natural, a jerky and meat product manufacturing company, has been given naming rights to the event center’s arena. The arena will now be known as the Hero Arena, which will be 27,000 square feet in size and capable of seating 5,500 people. A logo designed by the company with the words “Hero Arena Meat Snacks” will appear on the wall and in the center of the arena floor.

“We’ve been here as a family in this community a lot of years. The community has been supportive of us and what we do. It’s important that we give back,” Ball told the Post Register.

Ball named the arena after their brand, “HERO Jerky.” HERO Jerky was created to honor members of the military. A portion of its sales go to the Fisher House Foundation, a nonprofit that provides support to family of injured military members.

Bingham Healthcare announced its donation of $400,000 on Friday. In addition to the monetary sponsorship, “Bingham Healthcare Orthopedics will serve as the official team doctors of the new Idaho Falls hockey team, which will call the Mountain America Center home,” the hospital said in a press release.

“This new facility will be a beacon of entertainment and opportunity for the region for years to come,” said Jake Erickson, CEO of Bingham Healthcare, in the release.

Auditorium District Executive Director Rob Spear is now feeling much more confident about the event center’s ability to move forward. Spear told the Post Register in November that the project was approximately $2.5 million away from having the finances needed to begin construction. These new donations should place the event center near its financial goal. Spear said he can’t say much yet, but there will be big news to announce soon. A building permit has been purchased.

Terri Gazdik, the Auditorium District’s Board chairwoman, is hopeful the event center may open near the end of 2022.

“Today was a significant step forward for sure,” Spear said.

The Mountain American Center will be a 48,000-square-foot facility containing a 27,000-square-foot arena space. Seating will include party suites that will have the capacity to seat between 13 and 24 people in each one. An additional 11,500 square feet will go toward meeting space.

The auditorium district hopes to host events such as sporting events, rodeos, Disney on Ice, trade shows and conventions.

A decade in the making: Mountain America Center breaks ground

Terri Gazdik only had one word on her mind: finally.