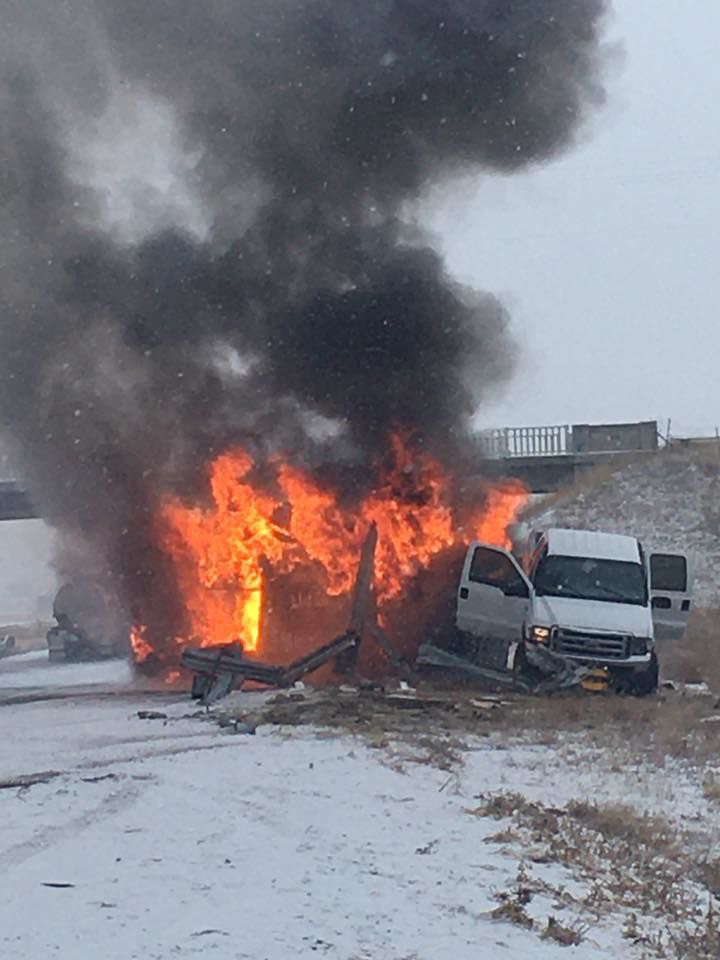 The Blackhawk BBQ Pit trailer is shown fully involved in flames on Interstate 15 on Wednesday. 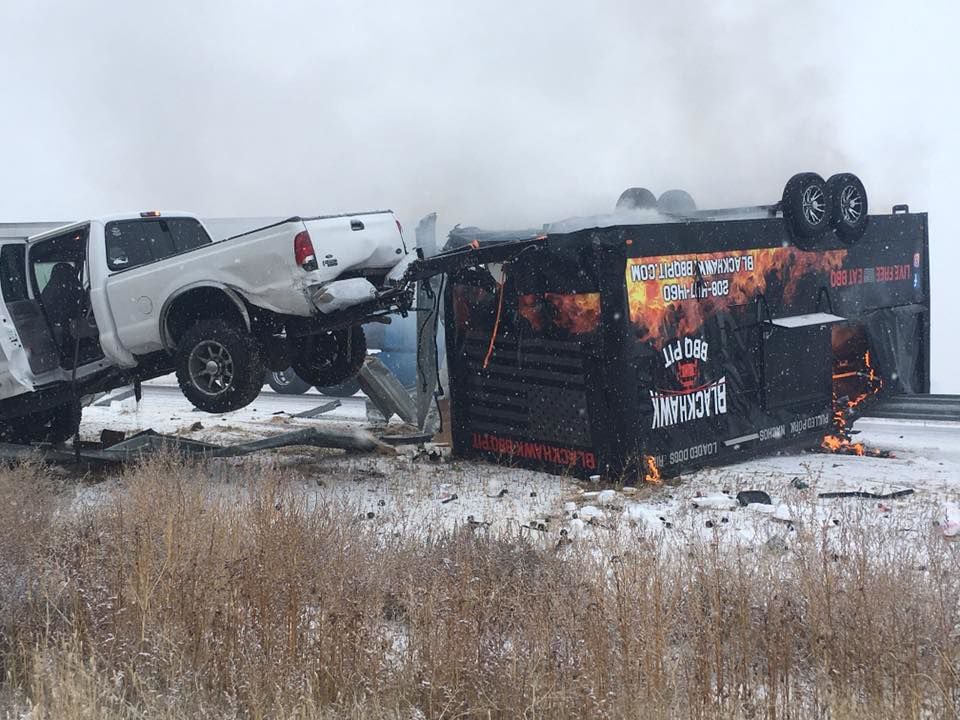 The Blackhawk BBQ Pit food trailer is shown sitting on its top while still hooked to the Ford F-250 pickup pulling it before becoming fully engulfed in flames. 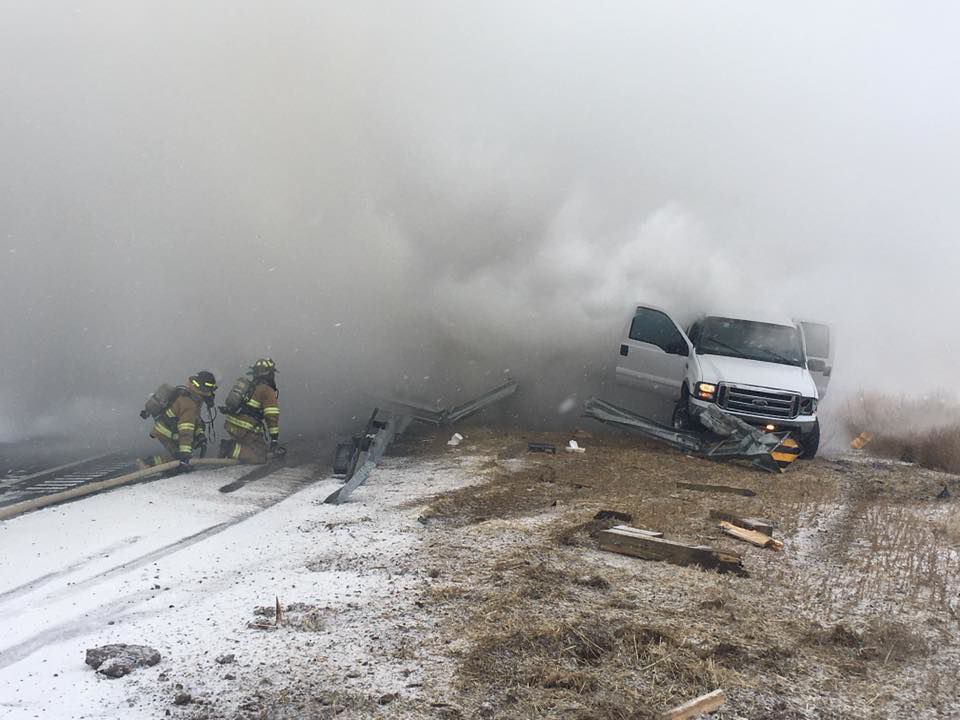 Firefighters work to extinguish the fire that totaled the Blackhawk BBQ Pit food trailer on southbound I-15 Wednesday. 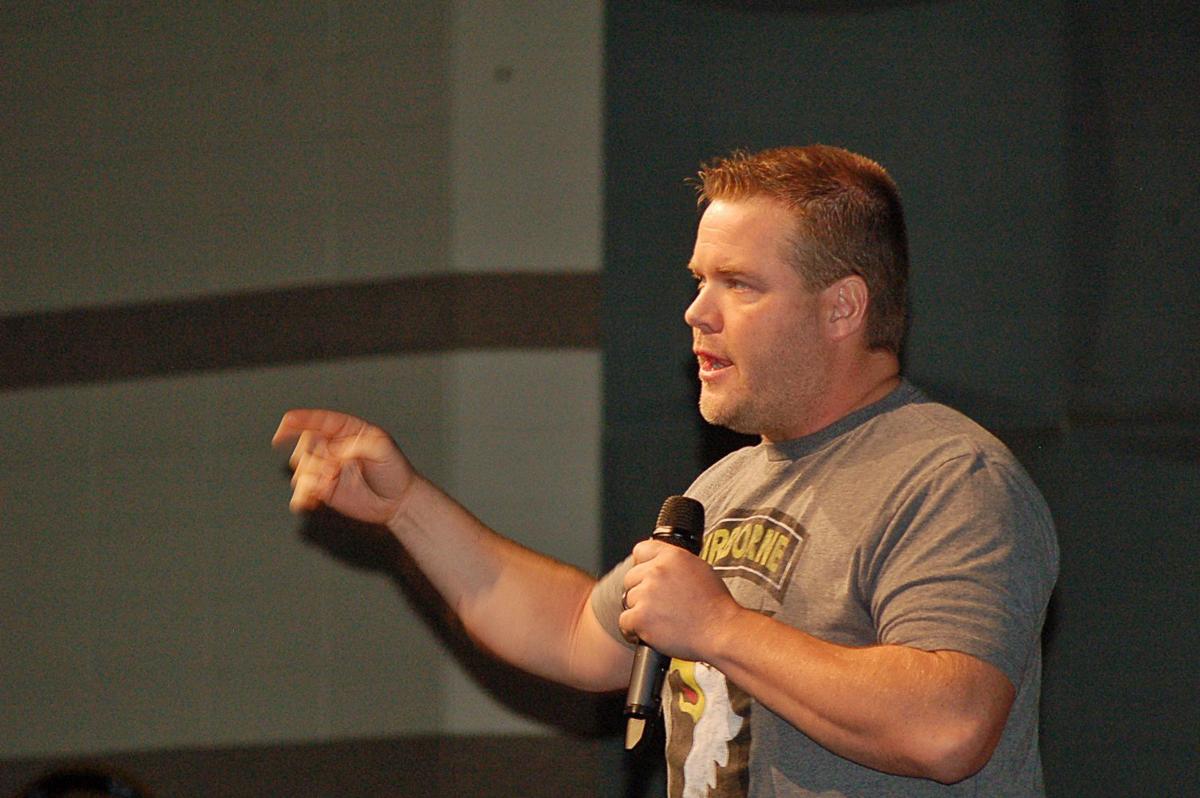 The Blackhawk BBQ Pit trailer is shown fully involved in flames on Interstate 15 on Wednesday.

The Blackhawk BBQ Pit food trailer is shown sitting on its top while still hooked to the Ford F-250 pickup pulling it before becoming fully engulfed in flames.

Firefighters work to extinguish the fire that totaled the Blackhawk BBQ Pit food trailer on southbound I-15 Wednesday.

BLACKFOOT — Nic Transtrum has faced life-threatening challenges before, and he’s not about to let an accident Wednesday that totaled his Blackhawk BBQ Pit equipment keep him or the business down.

Wednesday’s accident was one of multiple crashes on Interstate 15 between Pocatello and Blackfoot due to snowy and icy roads.

At 10:50 a.m., Idaho State Police investigated the crash involving Transtrum and two passengers southbound on I-15 at milepost 88, south of Blackfoot.

Transtrum, 45, of Blackfoot, was travelling southbound in a 2000 Ford F-250 pulling his 2014 food truck trailer when police said he hit an icy patch, fishtailed, left the right side of the roadway and struck the guard rail. The trailer flipped and caught fire. Landan Van Cleave, 19, of Blackfoot, and Teigen Erickson, 20, of Ammon were passengers in the vehicle.

Police said all occupants were wearing seat belts. Transtrum was transported by ground ambulance to Bingham Memorial Hospital in Blackfoot, where he was treated and released. The southbound lanes were blocked for approximately two hours.

His business, which was launched in July, uses the name Blackhawk because Transtrum was a Blackhawk helicopter pilot assigned to an air assault unit in Iraq, where he flew 79 combat missions. His unit was called Phoenix, and now Transtrum and family friends are determined to have the business rise from the ashes of Wednesday’s accident. His military career ended after he was injured on a mission.

Support for the business was pouring in quickly on Facebook after the accident, and Transtrum delivered an inspirational video message on its Facebook page as he was walking out of the hospital.

A GoFundMe account has been set up by Christina Hoshino Reid at gofundme.com/f/help-rebuild-blackhawk-bbq with a goal of $5,000 to help the families involved recover financially with costs insurance won’t cover.

Transtrum is determined to get the business back on its feet as soon as possible.

“Live free — Eat BBQ is our motto. We love the freedoms we have that allow us to enjoy life. BBQ is much more than good food but it’s something that brings family and friends together.

“I felt helpless as I watched our [awesome] BBQ trailer go up in flames today. It’s rather ironic I guess. We were headed to Pocatello to serve customers with a load of smoked meats when we hit an ice patch and our trailer fishtailed and we ended up into a guardrail.

“I’m super thankful for our local heroes who came to our rescue, including paramedics, firefighters, and Idaho State Police. They are good at what they do and today was no exception. We do all we can to help support these guys and recently added a local heroes spotlight wall to our website where citizens can share the stories of their favorite hero. Today was just another day at work for these guys I suppose, but they deserve recognition.

“I am touched by the outpouring of thoughts, prayers and well-wishes that we are receiving. Nothing compares to our community that pulls together to help each other out. I believe that is the essence of freedom … so we may all enjoy life, liberty and the pursuit of happiness.

“I learned from my missions in Iraq as a helicopter pilot, that some days we have big losses. But we will regroup, rebuild and get back in the fight. Today we took a big hit but we are warriors in life. And at Blackhawk BBQ Pit we are BBQ warriors! We will keep you posted as we rebuild.

“Thanks again for all the love and support. Today we rest and live to BBQ another day.

“Be safe out there this holiday season!”

The National Weather Service has issued a winter storm warning and winter weather advisory for eastern Idaho warning the public about that storm, which is expected to hit this morning through Friday morning. Another storm is forecast to hit eastern Idaho on Friday night through Saturday night followed by the final storm in the series passing through on Sunday and Monday.The storm forecast to hit this morning through Friday morning is expected to create hazardous driving conditions, especially in the higher elevations. The weather service is encouraging people driving in the region during the storm to make sure they have flashlights, food and water in their vehicles in case of an emergency.