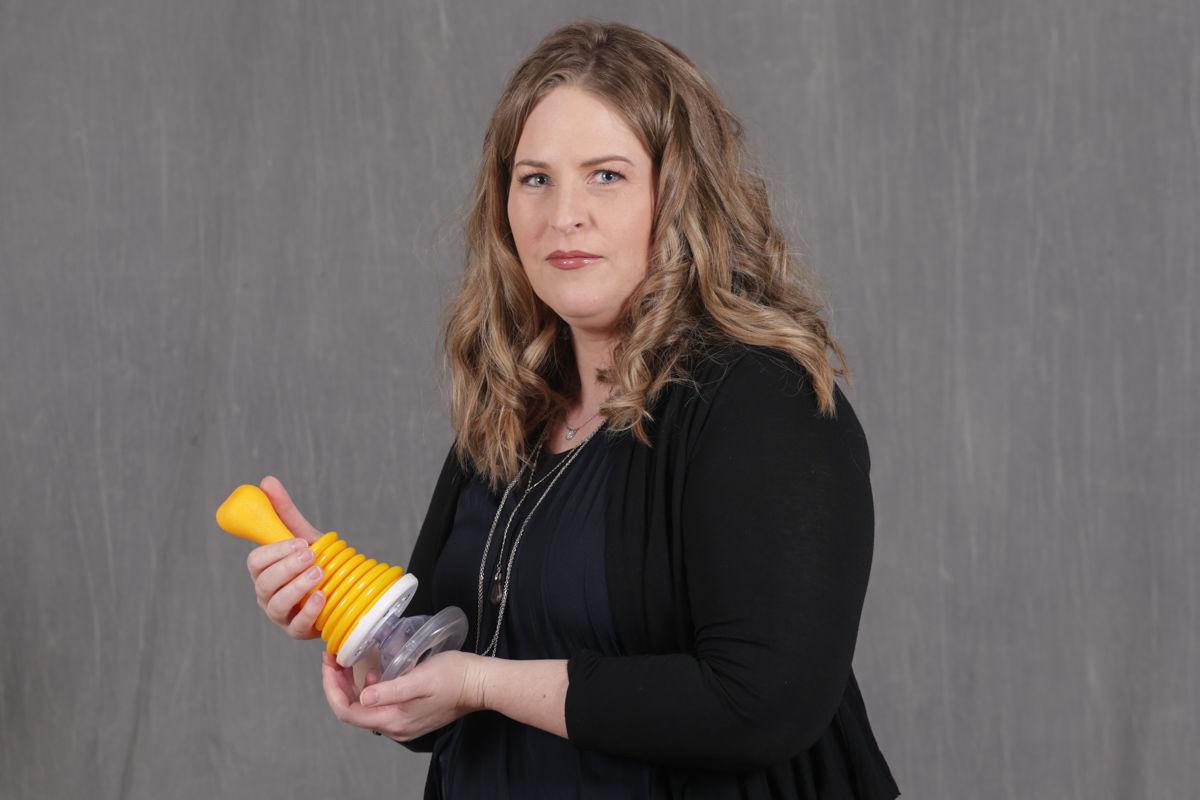 Angela Powell poses for a photo with a LifeVac device on Tuesday. Powell used the device to save her mother-in-law when she was choking during dinner in April 2017. The LifeVac website says: “LifeVac is a non-powered, non-invasive, suction rescue device developed for resuscitating a victim with an airway obstruction.” 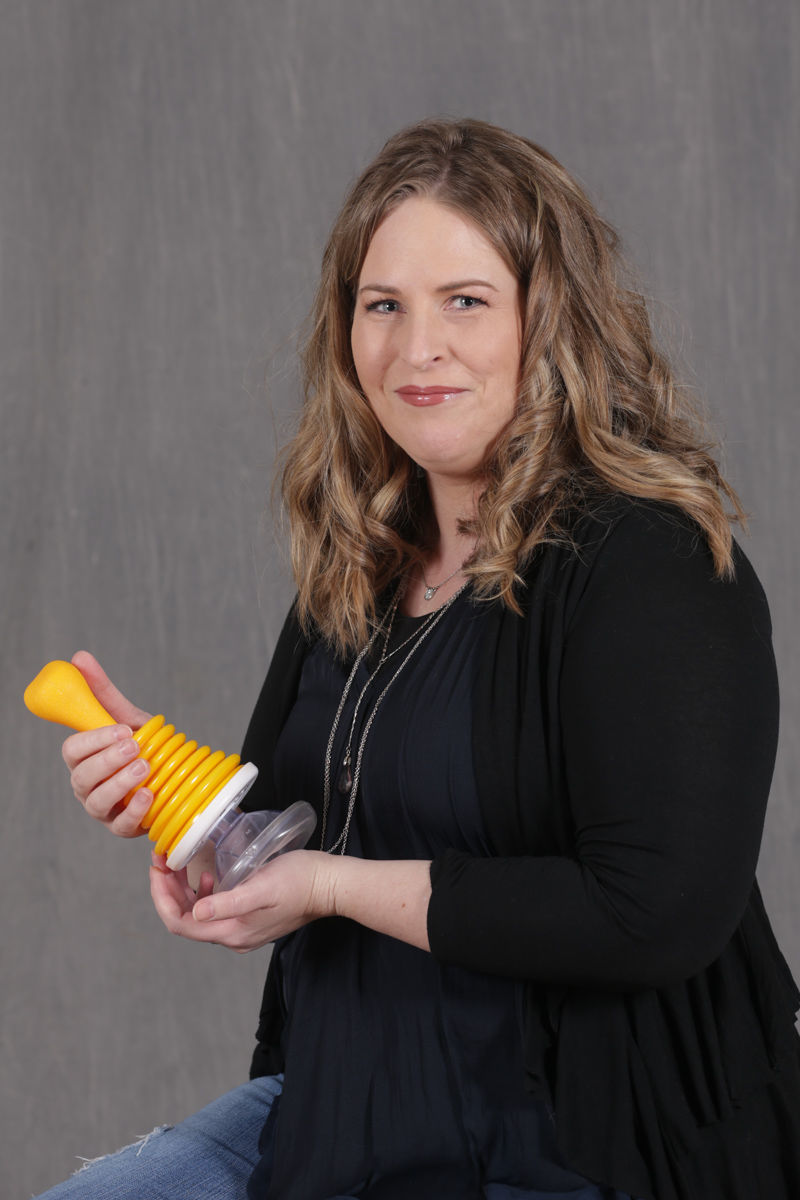 Angela Powell poses for a photo with a LifeVac device on Tuesday. 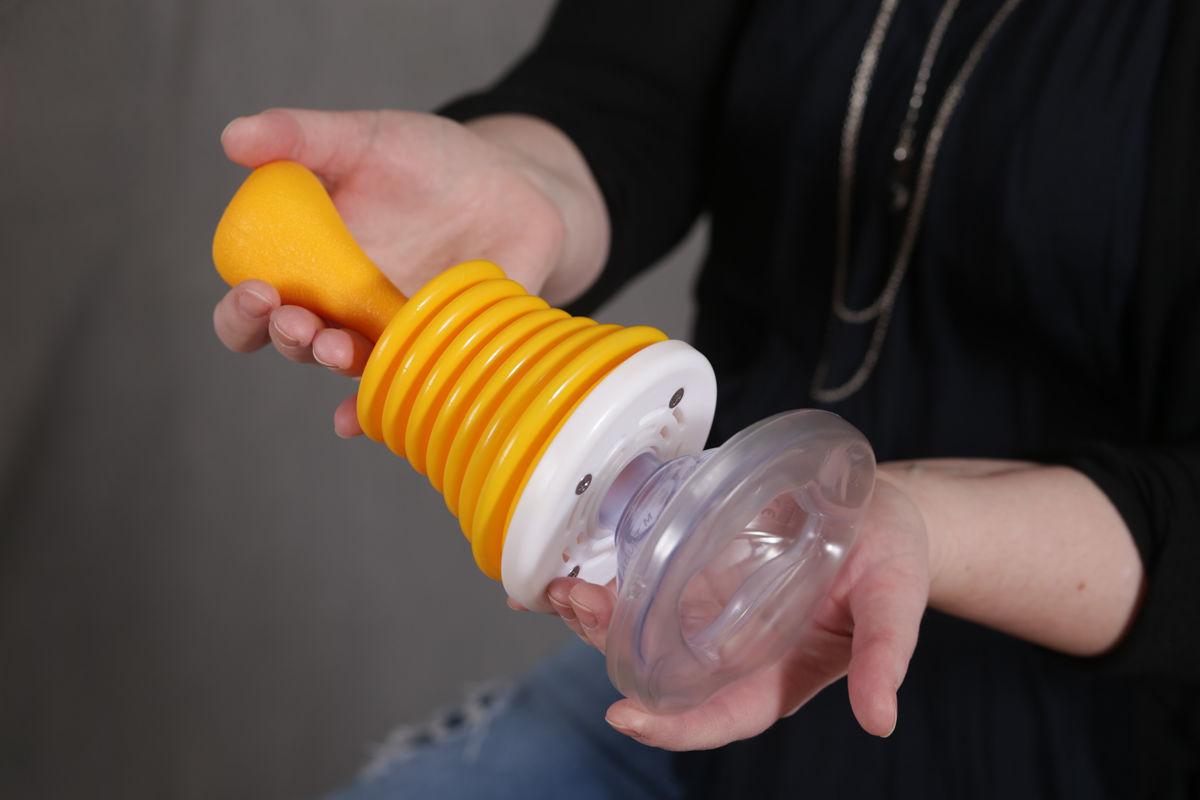 Angela Powell holds the LifeVac device she used to save her mother-in-law from choking.

Angela Powell poses for a photo with a LifeVac device on Tuesday. Powell used the device to save her mother-in-law when she was choking during dinner in April 2017. The LifeVac website says: “LifeVac is a non-powered, non-invasive, suction rescue device developed for resuscitating a victim with an airway obstruction.”

Angela Powell poses for a photo with a LifeVac device on Tuesday.

Angela Powell holds the LifeVac device she used to save her mother-in-law from choking.

When Angela Powell saw the ad for LifeVac on Facebook, she wasn’t sure if she would ever need it.

It was a $70 anti-choking device, a small plastic mask with a compressible bag attached. Her kids had survived choking incidents when they were younger, though, so the issue was on her mind. She ordered one and didn’t think about it for more than a year.

In April 2017, Powell’s in-laws came over to the house for a steak dinner. In the middle of the meal, her mother-in-law abruptly got up from the table and walked into the kitchen without saying anything. Powell’s husband Travis followed soon after and found her on the floor, choking on a piece of meat and struggling to breathe.

“He started doing the Heimlich on her and it wasn’t working. That was when he called on me to get the LifeVac,” Powell said.

The handheld plastic device uses air pressure to suction items out of a choking victim’s throat. The mask allows air to escape through the sides of the mask as it compresses but not when it is pulled back out, creating a light vacuum in the victim’s mouth that will hopefully force the item loose.

Powell’s mother-in-law may have survived without the use of LifeVac but it certainly worked in the moment. Angela positioned the device to her mother-in-law’s face and removed the offending piece of meat within seconds.

“I thought it would be more like a plunger where it’s push, pull, push, pull. This was just one push and it came out,” Powell said.

After seeing the device in action, Powell became a believer in the product. Her family now owns three of the devices — one in their house near the kitchen, one in their car and one that she sends with her three kids when they go babysitting. The mother-in-law also has one in her house, which she could use on herself in another choking situation.

She has also become an advocate for LifeVac. Powell appeared on the daytime medical show “The Doctors” to share her story and has convinced Rimrock Elementary School, where some of her children attend, to equip staffers with the device as well. Next on her list is expanding the device to Sandcreek Middle School for her older kids. A handful of other school districts and fire departments across the country have begun using the devices after they were donated to them by the company or concerned parents.

“The peace of mind given to parents and caregivers and with the saves the avoidance of that pain have been the greatest unanticipated gifts of our mission,” LifeVac inventor and company CEO Arthur Lih said in a statement to the Post Register.

Despite the anecdotal support of Powell and other users, physicians are skeptical about how well anti-choking devices actually work. While LifeVac and a similar device called the Dechoker “theoretically” could work, there’s not enough evidence to prove they do, former president of the American College of Emergency Physicians Jay Kaplan told the Wall Street Journal. Kaplan highlighted several potential pitfalls with the devices, including whether a panicking choking victim would let a rescuer put a mask on the mouth, the Wall Street Journal reported.

Choking is especially dangerous for children and the elderly. A report from the National Safety Council found that one in every 2,700 deaths is caused by choking on food and that choking is the third-highest cause of death for people over the age of 75. In Idaho, the Department of Health and Welfare reported that 44 people died from choking and other forms of accidental suffocation in 2016.

The Heimlich maneuver is widely recommended as the best course of action to save choking victims. It can be self-administered or done by a bystander with their bare hands and the maneuver works around three-quarters of the time. But the Heimlich is less effective if the airway is only partially blocked and some victims are not in a state where they can receive a Heimlich.

While the Heimlich’s effectiveness has been shown over decades, there is much less proof of exactly how well LifeVac works. There has never been a study on how well the device actually works on living people, though one done with a cadaver found that it worked 49 out of 50 times.

The company website claims that 20 people around the world have had their lives saved by LifeVac, though many of the cases are from outside the United States and have not all been confirmed by third parties.

Two of those life-saving claims were provided from Tina Monroe, a mother living in Meridian. The first instance came while she was driving down Interstate 84 near Boise this summer with her sons Phillip and Rhett, a 29-year-old who is in a wheelchair due to cerebral palsy and requires constant care, in the back of the car. As Tina rode down the left lane of the highway, Rhett began choking on one of the french fries he was eating.

“He had a panicked look on his face and was crying and there’s so little we could do,” Monroe said.

Pulling completely off the highway would require getting across all the lanes of busy traffic. Even if she made it off the road quickly, it would take time to unhook Phillip from the wheelchair in order to administer the Heimlich maneuver. Monroe also worried that the force of the efforts could also damage his weakened frame, potentially cracking his ribs even if he stopped choking.

However, Monroe did have one option: the LifeVac mask she had bought a few months earlier after a CPR class. She pulled onto the left shoulder as Phillip attached the device to his brother’s face and she reached into the back of the car. It took three pumps of the device before the food was dislodged and Rhett began breathing again.

“He would not be alive right now if it wasn’t for that device,” Monroe said.

Like Powell, Monroe became an advocate for the device after using it on her son. She has purchased 13 devices since the incident, keeping some around her house and giving others to friends and offices in the area. Gem State Developmental Center purchased five LifeVacs for their locations after hearing Monroe and one of their nurses endorse the product and the Meridian center used the device a few months ago to save Rhett from choking again.

“I feel like it was a good decision for us. It’s also really quick, so if LifeVac doesn’t work you have time to stop and try the Heimlich,” social worker and clinical director Lori Jo Poole said.

In a company news release, Lih said the device should be used as “a last resort in a choking emergency or when the Heimlich” is unsuccessful or cannot be used. Both Powell and Monroe agree that the device works better as an emergency backup for choking victims.

“In my mind, this is exactly the same level of preparation as having that (AED defibrillator) bag,” Powell said.