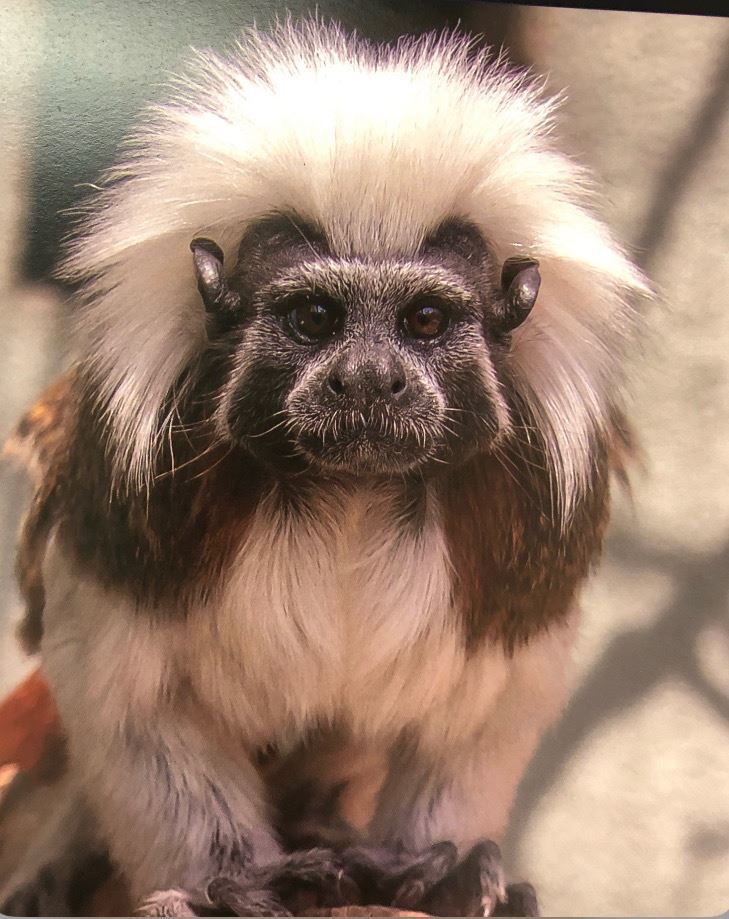 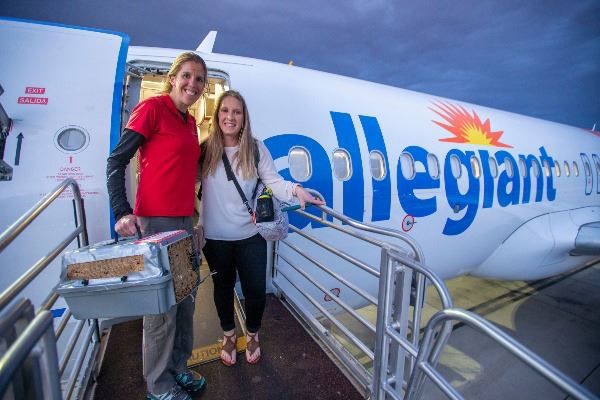 Ashley Cram, primate and large carnivore keeper at the Idaho Falls Zoo, readies to board an Allegiant Air flight to Idaho Falls with Tunda, an endangered cotton-top tamarin monkey.

Ashley Cram, primate and large carnivore keeper at the Idaho Falls Zoo, readies to board an Allegiant Air flight to Idaho Falls with Tunda, an endangered cotton-top tamarin monkey.

Early this month Chad, the male cotton-top tamarin at the Idaho Falls Zoo, lost his 20-year-old mate, Mani, due to her advanced age, an Idaho Falls Zoo news release said.

Because the critically endangered tamarins are social, zoo staff immediately notified the cotton-top tamarin Species Survival Plan through the Association of Zoos and Aquariums to ensure Chad’s mental health and well-being, the release said. After the cotton-top tamarin Species Survival Plan put out word of Chad needing a new mate, representatives from the Phoenix Zoo promptly responded.

Species Survival Plans are comprised of a scientific committee responsible for ensuring the genes of the captive populations, such as cotton-top tamarins, maintain diversity and good health for generations to come.

Thanks to the teamwork of representatives from Idaho Falls Zoo, Phoenix Zoo, Allegiant Air, Idaho Falls Airport and Phoenix-Mesa Gateway Airport a plan was put in motion to move Tunda from Phoenix to Idaho Falls, the release said.

As part of the Species Survival Plan program, animals often move from their natal zoo to other accredited institutions in a scientific matchmaking effort. By regulating breeding, scientists can help ensure tamarins, and many other species under human care, are being properly managed to prevent the extinction of the species. At 2 years old, Tunda is the perfect age to be matched with a male cotton-top tamarin, the release said.

“Tunda is a very mellow monkey who excelled at helping raise her two younger siblings,” said Mary Yoder, Phoenix Zoo’s collection manager of primates, in the release. “We are excited to know she will be an ambassador for her species and carry on her lineage through the SSP pairing with Chad in Idaho Falls.”

Under the plan, Chad and Tunda will be monitored for breeding activity and success, the release said. Their breeding success is important because cotton-top tamarins are one of the rarest primates in the world. Found only in a small, isolated area of forest in northwest Colombia, their numbers have decreased more than 80 percent in the last 20 years because of deforestation. It’s estimated less than 1,000 still live in the wild.

But, a large challenge remained. How to quickly and efficiently move a one-pound monkey over 870 miles in the middle of winter? Idaho Falls Airport staff members heard about Tunda’s plight and saw a way to help.

“I was very happy to see airport staff jump on board and work with our partners at Allegiant Air and with the Phoenix-Mesa Gateway Airport to assist the zoos,” said Airport Director Rick Cloutier.

“As soon as we heard about this special mission, our team came together to see how we could help,” said Hilarie Grey, managing director of corporate communications for Allegiant, in the release.

Late last week, Tunda and Yoder arrived at the Mesa Gateway Airport to begin the process of moving through Airport Security and meeting up with Tunda’s travel partner Ashley Cram, primate and large carnivore keeper at the Idaho Falls Zoo.

“Checking-in a monkey at the ticket counter was a ‘first’ for me!” Yoder said in the release. Tunda was given special treatment from the very moment she arrived at the Allegiant terminal at the Mesa-Gateway Airport. “Staff rolled out the red carpet for Tunda. She even had her own boarding pass!”

As they boarded the plane, Tunda and Cram were greeted warmly by the Allegiant flight crew who announced the plane would be carrying a rather “special guest” to Idaho Falls.

“The Allegiant crew was so kind and accommodating,” Cram said in the release. “And Tunda was the perfect little passenger. She was very calm and didn’t make a sound the whole flight.”