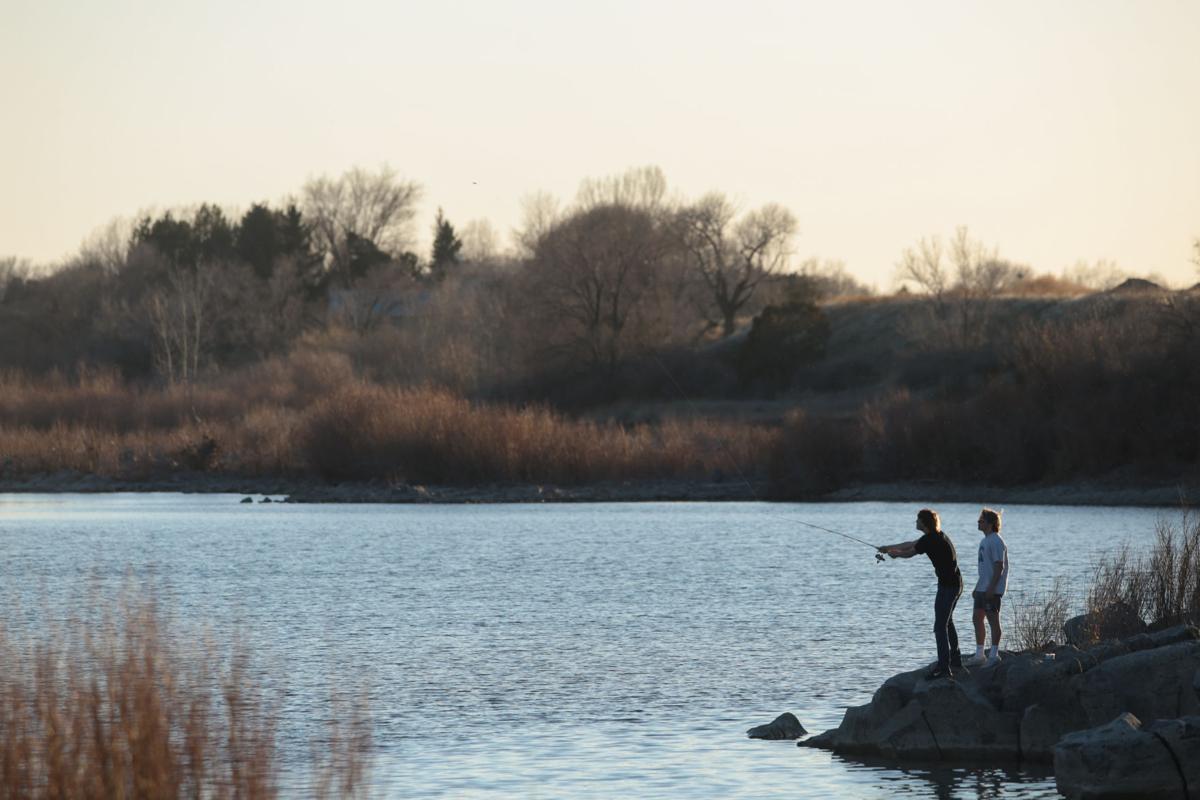 Quinton Smith and Jared Carlquist fish along the Snake River on Thursday, April 1, 2021. 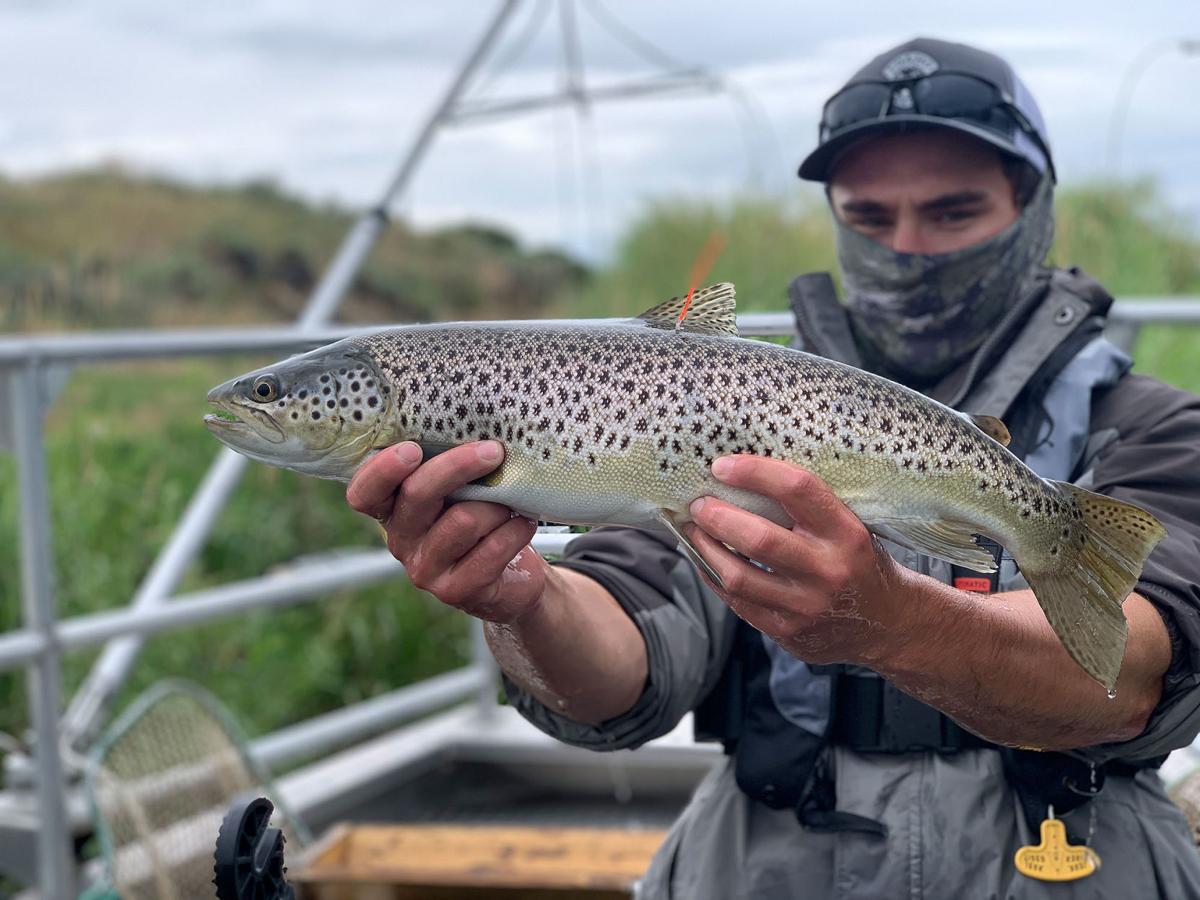 Fish and Game fisheries technician Joseph Dittmer holds a tagged trout before releasing it to the Snake River near Blackfoot during monitoring operations. 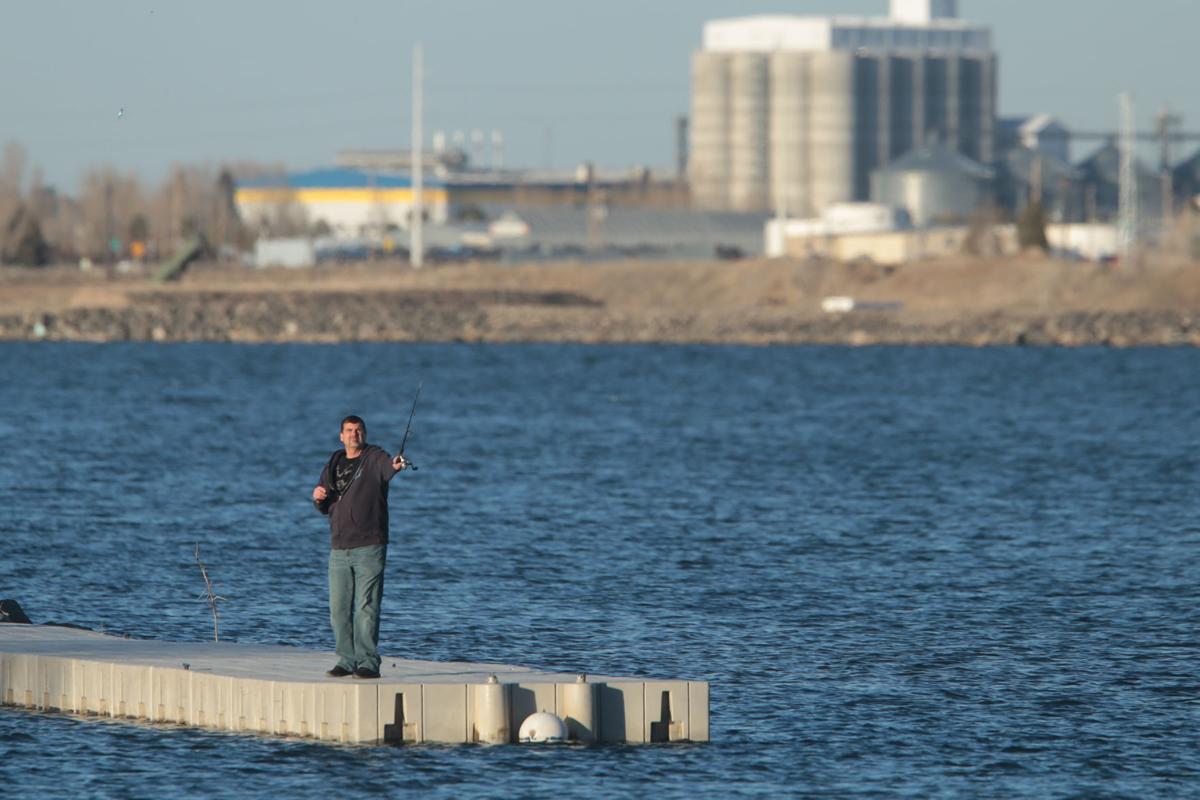 A fisherman casts his line along the Snake River on Thursday, April 1, 2021. 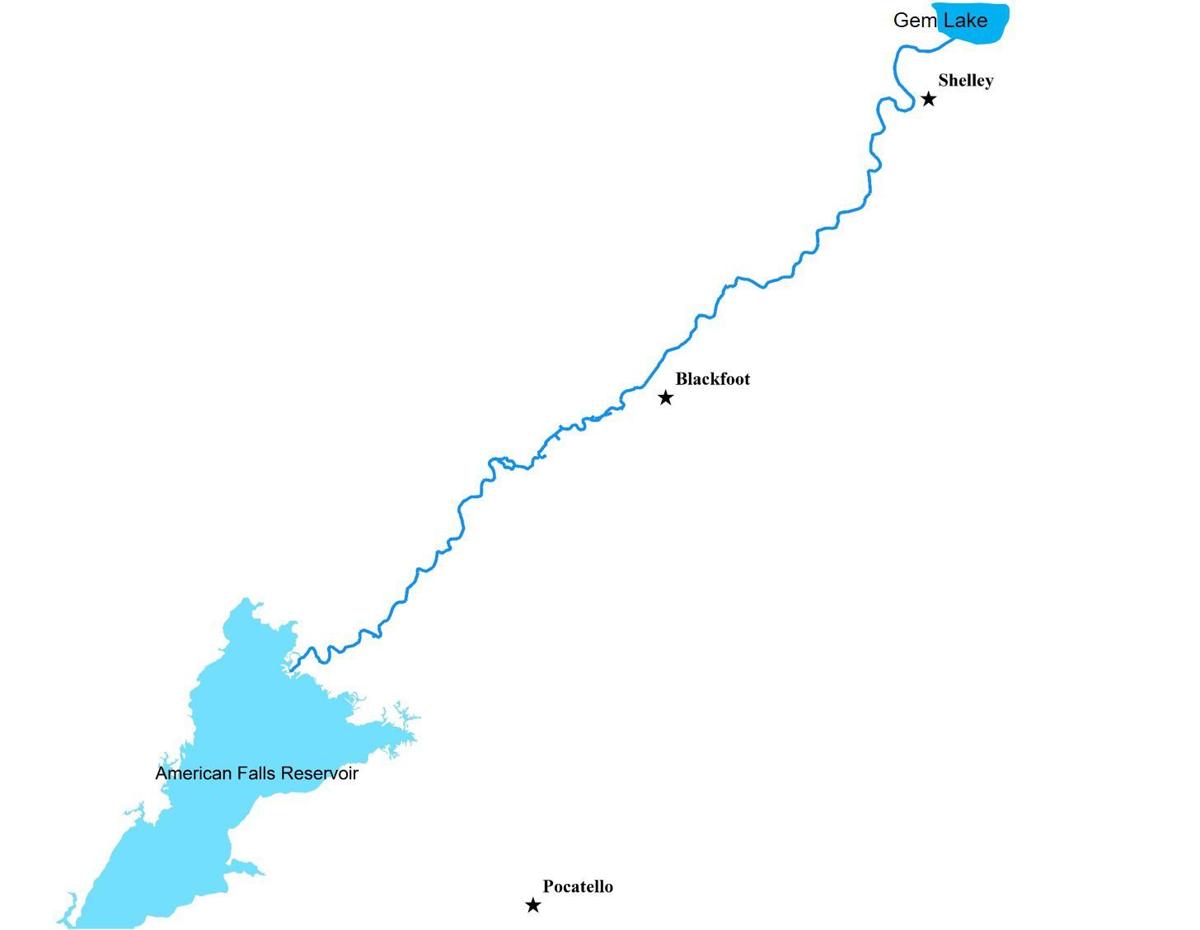 The area of the Snake River monitored by Fish and Game. 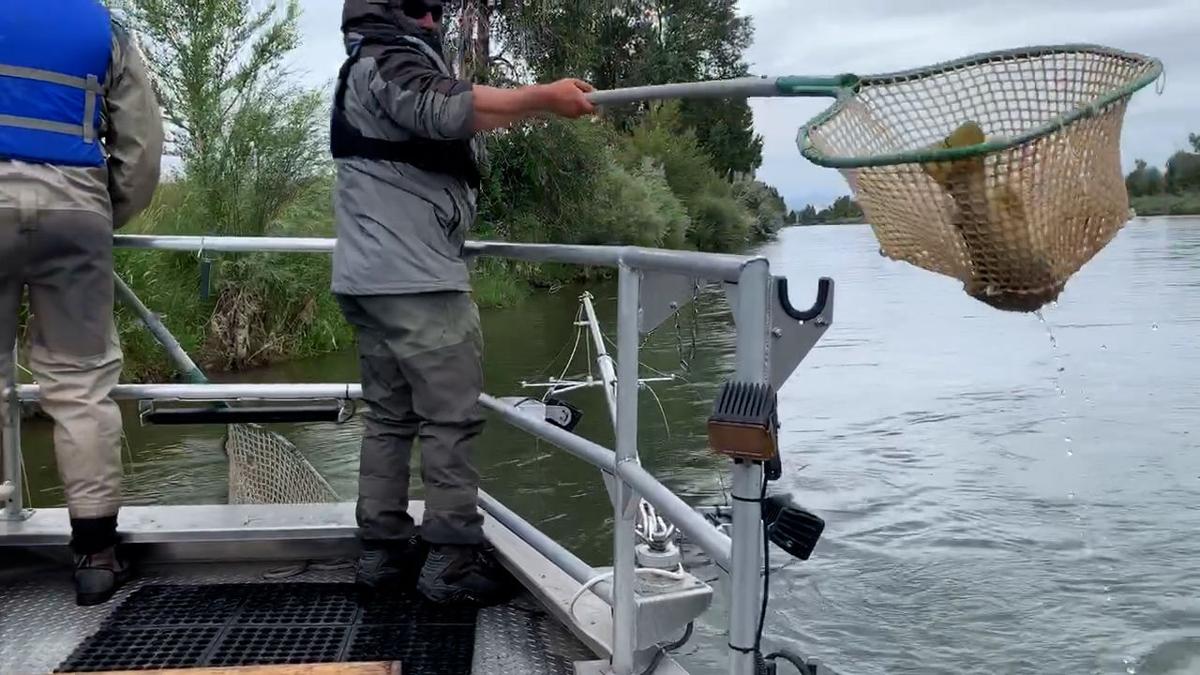 Quinton Smith and Jared Carlquist fish along the Snake River on Thursday, April 1, 2021.

Fish and Game fisheries technician Joseph Dittmer holds a tagged trout before releasing it to the Snake River near Blackfoot during monitoring operations.

A fisherman casts his line along the Snake River on Thursday, April 1, 2021.

The area of the Snake River monitored by Fish and Game.

The 63-mile stretch of the Snake River from below Gem Lake south to the American Falls Reservoir is a big question mark for Idaho Fish and Game.

When sportsmen approached Fish and Game alarmed because of a recent increase in angler numbers, some suggested it was time to tighten up the regulations before that stretch was over-fished. Fish and Game realized it needed data to make informed decisions.

The river starting just south of Idaho Falls passes farmland, homes, bridges, an interstate, canal diversions, a reservation, a golf course and side ponds and sloughs. It’s not as scenic as the Henrys Fork or South Fork, but savvy anglers know that a few trophy-sized fish swim here.

Anglers sounded the alarm in 2018 and Fish and Game took action by surveying anglers and planning a multiyear trout monitoring effort.

“We needed to get a better handle on what was going on there,” Hillyard said. “Starting in 2018 we did an angler opinion survey. We wanted to get an idea of what the concerns were and if the current regs of a six-fish limit was too much and if they were interested in going to a two-fish limit.”

About 80% of the anglers wanted to keep the limit unchanged, but Fish and Game also wanted to see if added angler pressure was affecting the stretch of water. They did two main things: Count fish and release tagged fish back into the river for anglers to catch.

“We felt it important to do this assessment at this time,” says Carson Watkins, regional fisheries manager for the Southeast Region. “This stretch of the Snake River has become increasingly popular with anglers in recent years, and yet few surveys had been conducted here up to this point.”

In 2019 and 2020, Hillyard and his crew drove a jet boat along the river and electroshocked fish about every 3 miles sampling 24 sites. The weak electric current temporary stuns fish in front of the boat where they are scooped up, measured, weighed, had a tiny bit of fin rays clipped to determine age and implanted with a small tag near the dorsal fin. The tag looks like a large bright orange toothpick printed with an ID number and a phone number to call. The number connects anglers to the “Tag You’re It” hotline.

“The data that’s come in so far from just the 2019 tags is that there’s about a 10% harvest on those fish,” Hillyard said. “That’s pretty low. We’re finding that some of the concerns of too many fish being harvested, as of right now the data suggests that there’s not a lot of harvest occurring.”

Hillyard said with 632 tagged fish now in the river, they expect to get a clearer picture during 2021 of what the harvest rate looks like.

Besides the focus on the number fish being kept by anglers, Fish and Game has learned a few other things about the personality of the fishery.

“The majority of the fish are brown trout, then rainbows, then cutthroat,” Hillyard said. “(The browns) just found a niche there, good habitat to spawn in and environment as far as water temperature and food availability.”

Longtime fisherman Clair Hill fishes this stretch of the river in his jet boat and found similar results to Fish and Game’s electrofishing.

“Cutthroat are very rare, browns are common with most (at) 10-17 inches and fair numbers at 18-22 inches and a few larger,” Hill said. “(There are) good numbers of planted rainbows … and native rainbows in fair numbers in the 15-inch-plus size, some up to 24 inches with a few exceeding that size. We catch very few juvenile rainbows. ... Also, (I’ve caught) a bonus sturgeon right below Gem Dam.”

Hillyard said fish numbers are not as plentiful as the more famous South Fork which boasts nearly 5,000 fish per mile. But this stretch of river is also not as crowded as the South Fork, due in part to access.

“Between the Blackfoot Canal diversion and the bridge at Firth it is mostly only accessible by boat,” Hill said. “Access to the river by bank anglers is pretty limited through much of the area because of mostly private lands.”

Both Hill and Hillyard said floating this section of river can be challenging.

“It can be. The trickiest parts are at Woodville,” Hill said. “There is a lava rock wall across the river with about a 4-foot drop and several lava outcrops and boulders below, and there’s the canal diversion for Fort Hall and Blackfoot. At Firth, there is a canal diversion that you can’t get past without taking out and relaunching below. You do have to learn the river to stay out of trouble. There are quite a few islands, boulder fields, and gravel bars that can be problems in lower flows.”

With fewer options for bank and wader anglers, fishing can be concentrated in certain areas.

“I have witnessed many more people fishing that stretch,” she said. “We used to catch fish through there all the time, but hardly anything anymore. ... The closer we can get to the reservoir, the better the catching is.”

Fish and Game plants 40,000 rainbow trout in five different sites along the Gem Lake to American Falls stretch each year. But during electrofishing surveys, they turned up more wild trout than hatchery fish.

“(Compared to) other systems, I’d say the size of the fish and how many there are is impressive,” Hillyard said.

The survey turned up a few surprises.

“We had 27- to 28-inch rainbows and a couple of browns that were that size,” Hillyard said. “There were a couple of mountain whitefish that I’ve never seen that big before. There are bass in there. I wouldn’t say it’s something that you could go target. We sampled one smaller sturgeon.”

Hillyard said once the complete survey results are in by the end of this year, Fish and Game plans to put the stretch of river on a regular three-to-five-year survey program to keep tabs on any changes.

“There’s a lot of changing in the angler pressure right now,” Hillyard said. “This is going to become one of our routine monitoring reaches. … Some of the more popular places like the South Fork and Henrys Fork are getting so much pressure now that people are trying to find places to go. They’ve found this place and the word’s getting out.”