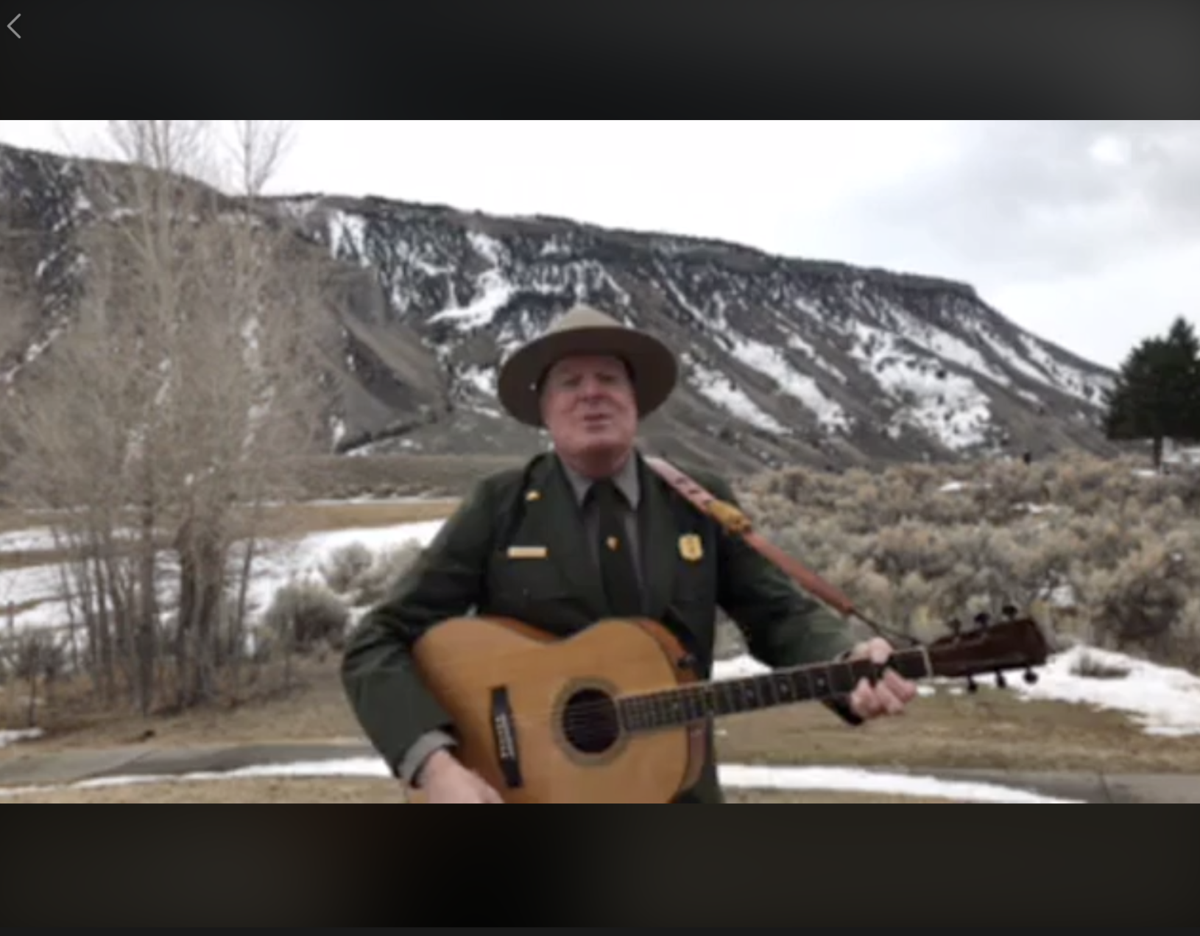 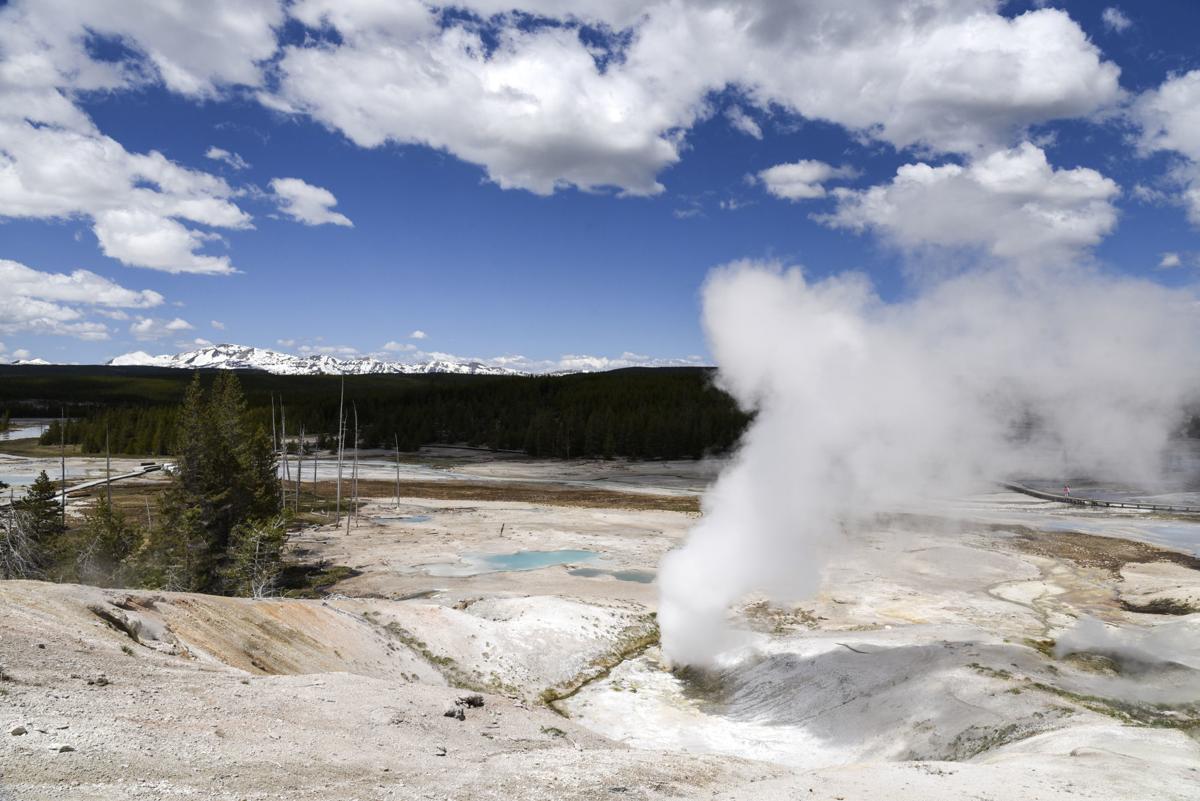 The Ledge Geyser erupts in the Norris Geyser Basin on Tuesday, May 15, 2018, in Yellowstone National Park.

The Ledge Geyser erupts in the Norris Geyser Basin on Tuesday, May 15, 2018, in Yellowstone National Park.

In the middle of the 17th minute of the Facebook Live video, Mark Miller reached for his guitar.

The park ranger, fully clad in green and gray, had been laying out the history of Yellowstone National Park, which he was standing in. He had talked about the Native American tribes that called the park home, the Lewis and Clark expedition and John Colter, the first European to explore what would become the world’s first national park.

Miller had talked about how some didn’t believe Colter’s stories of the future Yellowstone and how the mountain man was ridiculed. And Miller had asked the audience — stuck at home all over the world — to contemplate why people explore new places.

Now it was time for a song.

“Once there was a mountain man with strange stories to tell ...,” Miller sang, beginning a tune he wrote called the “Mountain Man Tribute Song.”

It’s meant to honor the likes of Colter and Jim Bridger and the tribes who called the area home first, crediting them with recognizing the value of Yellowstone.

Two-and-a-half joyful minutes later, he put the guitar down and picked up his history lecture somewhere in the 1860s.

The video, posted to Yellowstone’s Facebook page in early April, was the second in a series the park’s education rangers have been producing while the park is closed to visitors. Twice a week, rangers have used the videos to explain complex science and history to people, giving them a window into the park.

“It’s a way to share the wonders of Yellowstone in this time we’re all in,” Miller said.

The series grew out of the ashes of canceled educational programs. Bob Fuhrmann, supervisor of Yellowstone’s youth programs, said 30 school groups were scheduled for programs in the park this spring and would have encountered rangers like Miller. But with the closure, the programs were all canceled.

So Fuhrmann and the staff who were going to work on those programs had to adapt. They shifted their focus to enhancing the park’s “distance learning” offerings, including live virtual visits with classes on different online platforms and recording some of their programs.

Facebook Live became one of the tools they were using for that. Fuhrmann said it gets their work in front of more eyes — not just teachers and students.

“It’s a great way to engage with a larger audience in an easy way,” Fuhrmann said.

The first Facebook Live video featured two rangers standing in the snow outside the Albright Visitor Center, talking about the ways animals adapt to winter. Since then, rangers have given presentations on birds, geysers, bison, the microbes inside the park’s thermal features and more.

A lot of people tune in. The video of Miller talking and singing through the park’s history has been viewed more than 120,000 times, and the comments come from all over the world.

“Watching from Mississippi,” one commenter wrote.

“Thank you for bringing Yellowstone to Germany!” wrote another.

“Your Mom and Dad watched you from Minnesota, Ranger Mark!”

Miller has been a seasonal ranger in Yellowstone since 2017. He lived a couple different lives before that. The native Minnesotan first worked in the wood products industry for about a dozen years, then in ministry and Christian music for about a dozen years. He worked on staff at a few large churches and produced records and wrote songs under the label Vineyard Music.

He and his wife hit “empty nesthood” in their 40s and decided to move west. He picked up seasonal ranger jobs at a few different parks before landing in Yellowstone three years ago. He’s been here ever since.

He’s been stationed at the Grand Canyon of the Yellowstone the past few summers. He’d been hired as a seasonal education ranger for the spring educational programs, which is how he finds himself in front of the camera for some of the Facebook Live videos.

His songwriting talent has been handy. He had written part of the “Mountain Man Tribute Song” to sing at evening programs at the canyon and developed it further this spring. He has another called “Hey Bear” — more than a few Facebook commenters requested that song during his live video.

“It’s part of my creativity, and like all of us education rangers, we’re in a period where we’re needing to get more and more creative in providing educational opportunities for people all around the planet,” Miller said.

The sight of a park ranger holding a guitar surely convinces more people to stop scrolling. At the end of the video, after he’d traced Yellowstone’s history to its designation as a park in 1872, Miller was asked what his favorite song is.

He picked the guitar back up and launched into one just about everybody would know.