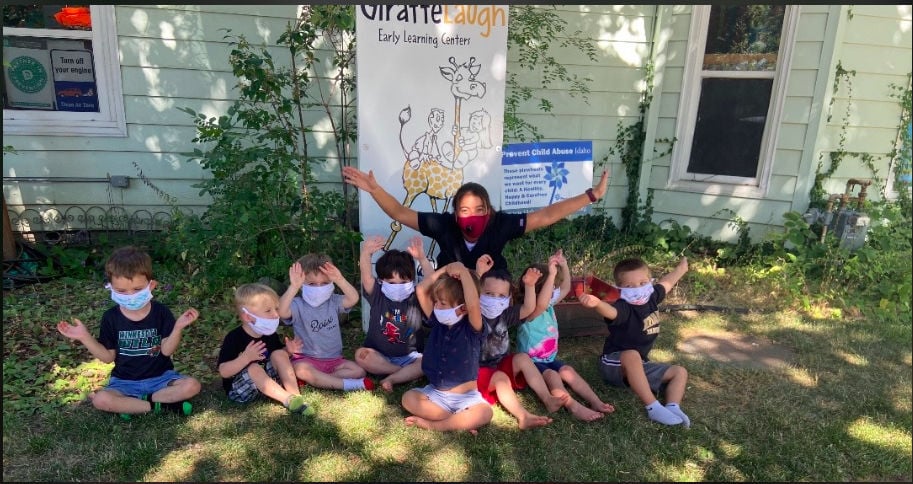 The Giraffe Laugh child care center in Boise’s North End opened back up in mid-June, after closing for 10 weeks due to Covid-19. 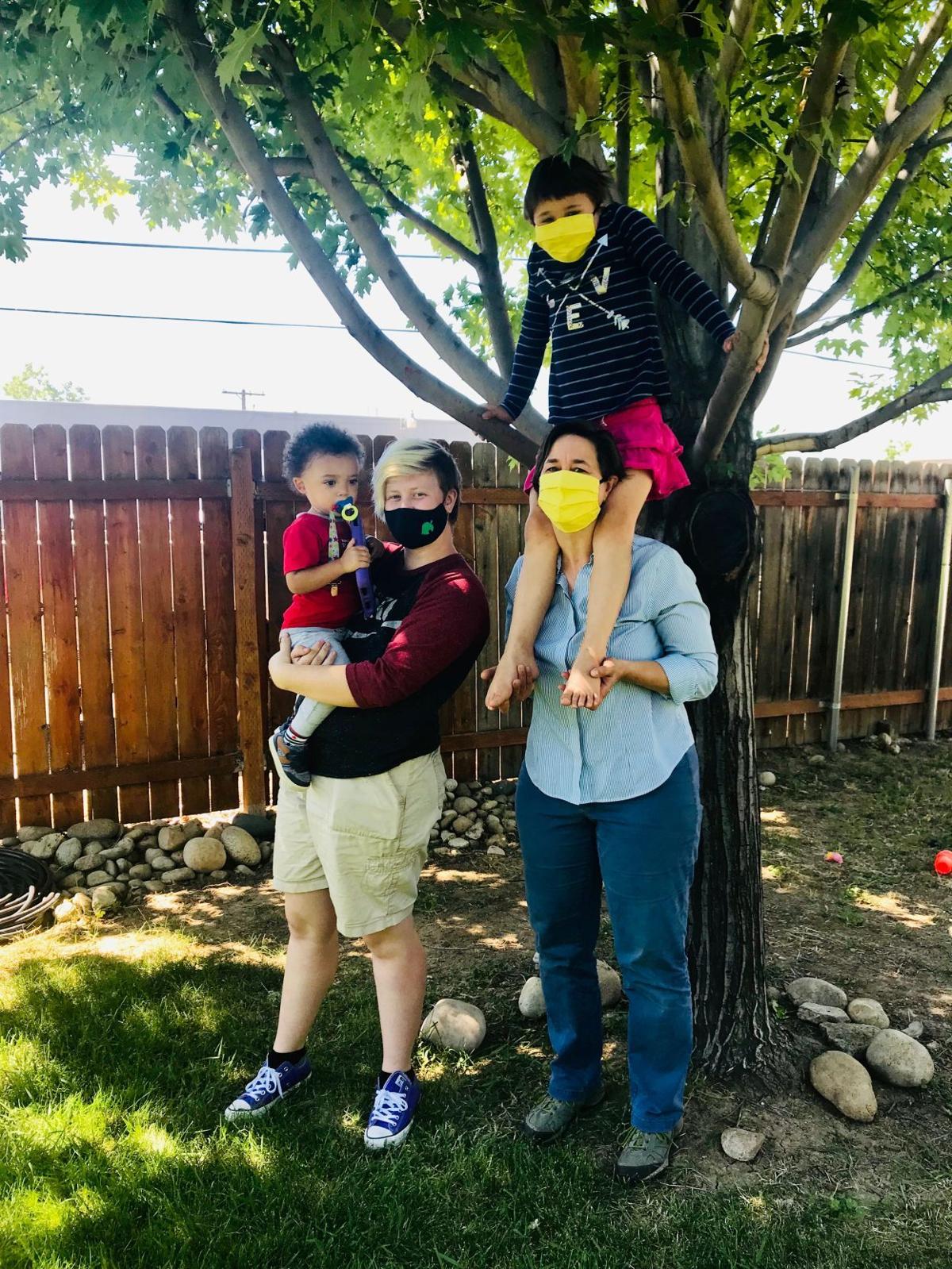 Ceci Thunes (right) and her children, Ahniya, 7, and Theo, 2, at home in July with caregiver, Finnegan Stoner. “We absolutely couldn’t do it without him,” Thunes said.

The Giraffe Laugh child care center in Boise’s North End opened back up in mid-June, after closing for 10 weeks due to Covid-19.

Ceci Thunes (right) and her children, Ahniya, 7, and Theo, 2, at home in July with caregiver, Finnegan Stoner. “We absolutely couldn’t do it without him,” Thunes said.

BOISE — For Ceci Thunes, the boundaries between work and home have disappeared.

A state advocacy manager for a nonprofit organization, Thunes, 50, works remotely every day from a small corner desk in her living room while her children, Ahniya, 7, and Theo, 2, sit surrounded by toys a few feet away.

Thunes, a single parent who adopted the two siblings in April 2019, shares the office and playroom space with her kids in their 900-square-foot home in Boise while social distancing due to COVID-19.

That provider, Finnegan Stoner, is a part of the household from 10 a.m. to 4 p.m., five days a week.

The pandemic has sparked a child care crisis in the U.S., as schools and child care centers struggle to reopen, according to a new report by the National Association for the Education of Young Children.

The July 13 report titled "Holding On Until Help Comes" reveals that only 18% of child care programs are confident they will survive a year without significant public financial support.

“The child care system is in crisis mode,” said Beth Oppenheimer, executive director at the Idaho Association for the Education of Young Children, a nonprofit child care advocacy organization in Boise.

“Even before COVID-19 hit, providers were operating on razor-thin margins,” Oppenheimer said in a telephone interview.

There are more than 23 million children under the age of 5 in the U.S., and the families of more than half of them rely on some form of day care outside of the home, according to Child Care Aware of America.

According to the National Association for the Education of Young Children report, approximately half of child care programs have been closed at some point during the pandemic.

The association surveyed more than 5,300 child care providers from all 50 states, as well as Washington, D.C., and Puerto Rico, between June 19 and June 30. Of those surveyed, 86% serve fewer children now than prior to the pandemic, with the average number of children decreasing from 105 to 48 for child care centers and 12 to seven for family child care homes.

Approximately two of five respondents — and 50% of minority-owned programs — are certain they will have to close permanently without additional financial support.

The U.S. Department of Labor reports that more than 325,000 child care workers nationwide have lost their jobs since February.

According to the Idaho Association for the Education of Young Children, 50% of Idaho families live in child care deserts — areas where little or no quality child care is available.

All four centers closed in mid-March when Boise schools closed in response to COVID-19, Fascilla said. “The decision to close was hard. The anxiety level of the teachers and parents was high.”

The system for caring for children in Idaho was already severely lacking, even before the pandemic, Oppenheimer said.

“Child care is essential to our economy, and Idaho has a long history of undervaluing quality care and a lack of public investment,” she said.

Idaho loses $479 million annually due to breakdowns in child care, according to a report released in February by the U.S. Chamber of Commerce Foundation. Absences and employee turnover cost employers about $414 million each year, and $65 million in tax revenue is lost annually due to child care issues.

Idaho remains one of only a handful of states that does not invest in preschool programs, leaving working parents to cover the high costs of care, Oppenheimer said.

The average price of center-based infant child care in Idaho is $8,636, more than the average annual tuition and fees at a public four-year college or university, according to a 2019 report from Child Care Aware.

Single mothers in the workforce are particularly affected by a lack of access to affordable and reliable child care, as they often don’t have support from a partner to assist with child care responsibilities.

Thunes said she feels fortunate that her job provides her some flexibility. She is hopeful that her children can safely get back to school and child care within six months, she said.

“It’s not perfect,” she said. “If I get five hours of work in each day, I feel like that’s a success.”

Child care challenges have become a barrier to work, especially for mothers, who often take on caregiving responsibilities when their family cannot find or afford child care, according to the Center for American Progress.

In a 2018 survey, mothers were 40% more likely than fathers to report that they had felt the negative impact of child care issues on their careers.

Megan Greco, 30, of Meridian works for an environmental nonprofit organization and her daughter’s child care at the YMCA shut down on March 15. Her daughter, Addison, 5, stays at home with Greco’s parents while she goes to work.

Greco, who is single and receives no child care support from Addison’s dad, works 25 hours a week so she can give her parents a break from child care, she said. “It’s tight, and it’s hard on my parents who both have health problems. But I couldn’t make it work without them.”

In mid-June, Giraffe Laugh opened their doors back up to families, said Fascilla. Revenue has decreased and costs are up due to additional cleaning supplies and equipment necessary during the pandemic.

“It’s stressful,” Fascilla said. “The CARES Act funding we received in June for supplies was gone by the time we reopened our doors.”

The CARES Act provided Idaho with $20.6 million in supplemental funding for child care, through the Child Care and Development Block Grant, to help address needs of working families and providers during the pandemic.

Child care has been deemed an essential service in Idaho, and the state plans to use funds for continuing subsidy payments for providers. About $7.2 million has been released to programs so far, according to officials at the Department of Health and Welfare who oversee the emergency child care grants.

Oppenheimer said she is concerned that the funds aren’t getting to providers fast enough.

“It’s day-by-day whether programs can continue to stay in business,” she said. “Many providers are saying, ‘I just can’t do it anymore.’”

Greco said her daughter should be starting kindergarten in August, but she hasn’t heard from the school district yet if they will reopen. “I don’t know if it will be safe sending my daughter to school,” she said. “I am really struggling with what to do next.”

Marney Ellis of Boise is a graduate student at Harvard University studying journalism and digital storytelling.

A coalition of nonprofits will host a call Tuesday to recommend solutions to elected officials and business leaders regarding the pandemic's detrimental impacts on the child care industry.

The "Idaho Child Care Crisis Call" will take place over Zoom from 12-1 p.m., hosted by the Idaho Association for the Education of Young Children, the Idaho Association of Commerce and Industry and other partners including United Way of the Treasure Valley and Saint Alphonsus Health System.

Register for the Zoom call at bit.ly/0804call.