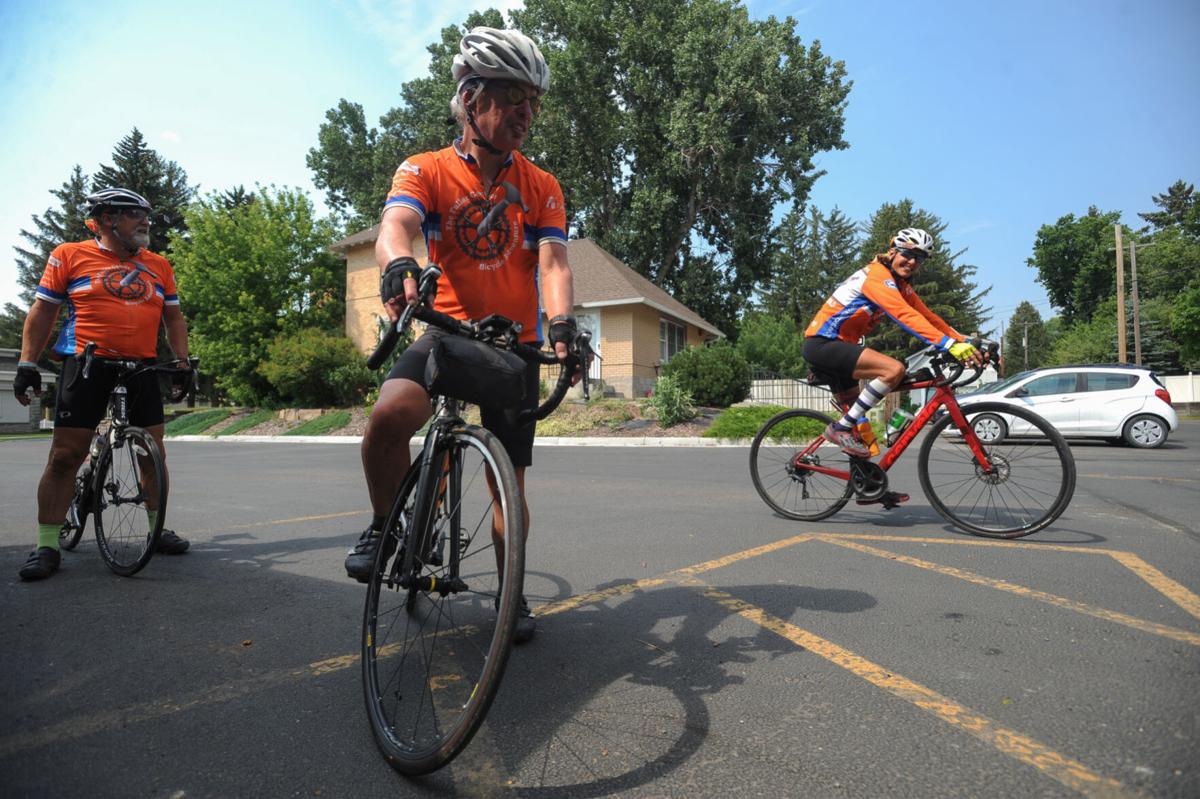 Cyclists with the Fuller Center Bike Adventure arrive at First Presbyterian Church in Idaho Falls on Wednesday, July 21, 2021. The cyclists started their trip in Amelia Island, Florida, and are riding to Florence, Oregon, to raise $600,000 to buy homes for low income families. 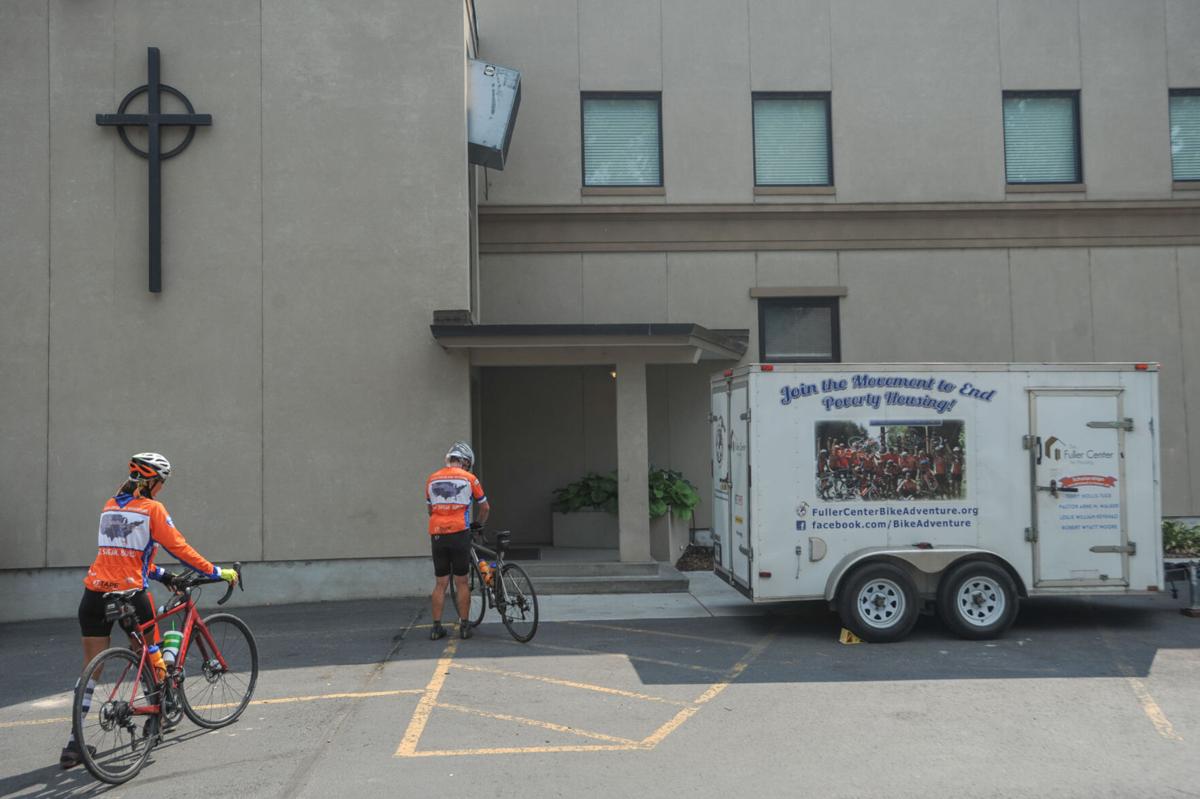 Cyclists with the Fuller Center Bike Adventure arrive at First Presbyterian Church on Wednesday, July 21, 2021. The cyclists started their trip in Amelia Island, Florida, and are riding to Florence, Oregon, to raise $600,000 to buy homes for low income families.

Cyclists with the Fuller Center Bike Adventure arrive at First Presbyterian Church in Idaho Falls on Wednesday, July 21, 2021. The cyclists started their trip in Amelia Island, Florida, and are riding to Florence, Oregon, to raise $600,000 to buy homes for low income families.

Cyclists with the Fuller Center Bike Adventure arrive at First Presbyterian Church on Wednesday, July 21, 2021. The cyclists started their trip in Amelia Island, Florida, and are riding to Florence, Oregon, to raise $600,000 to buy homes for low income families.

A tired Tony Drake of Flagstaff, Ariz., was snacking nonstop with his companions at a table in the First Presbyterian Church gymnasium Wednesday afternoon after riding a bicycle from Jackson, Wyo., over Teton Pass, Pine Creek Pass and into Idaho Falls that day.

Drake and 11 other riders started more than seven weeks ago in Ameila Island, Florida and will stop pedaling in Florence, Oregon, after about 3,750 miles. The ride is put together by the Fuller Center Bike Adventure to raise money and build or repair homes for families in need.

“On a ride like today, I would burn 5,000 to 6,000 calories,” Drake said, still wearing his bright orange cycling jersey and shorts. “When I started this ride, I weighed 177, and when I weighed myself a few days ago, I weighed 167, and I’ve eaten more than I've ever eaten in my life. I can’t keep up with the caloric requirement doing what we’re doing day after day.”

The Christian-focused Fuller Center bike group will pass through 15 states by the end of the ride and make six stops along the way to get off their bikes and help build or repair homes. Riders are also required to gather a certain level of funding toward the effort and support home-building projects. Recipients of interest-free loans pay back the money which is then reinvested in other home-building projects.

“The whole focus of the ride is to provide housing,” said cyclist Mike Schuck from Cape Canaveral, Fla. “Amongst these riders we have raised $200,000 which goes toward financing and building materials. The people we help have to be willing to do some of the work. … We worked on eight different buildings at six different stops along the way.”

The group’s coordinator, Neil Mullikin, calls it the “theology of the hammer.”

“When you meet the families that we’ve helped, it makes a significant impact on all of us,” Mullikin said. “We’ve met individuals who basically it’s changed their lives.”

Schuck, who is retired, said besides the fun of seeing the country on two wheels, he has also enjoyed the work.

“There was one woman in Warrensburg, Missouri, we helped out refurbishing her roof,” Schuck said. “She just couldn’t understand how people would come and help her out and not ask for anything in return. We stop and you think you’re blessing people, but we get so much more in return.”

Roger Mayes, a member of the First Presbyterian mission committee, helped organize the group’s one-night stay in Idaho Falls with a pot luck dinner, a shower at the nearby YMCA, and a place to sleep inside the church.

“The shower is the best part of the day,” said Randi Topps, a schoolteacher from Orlando, Fla.

Mayes said the church was also the stop-off for the ill-fated Bike and Build group that passed through in 2016. That group, associated with the Habitat for Humanity organization, had two of its members struck by a car on U.S. Highway 26 between Ririe and Idaho Falls. One member was killed and another was paralyzed from the waist down. The Bike and Build organization changed their route afterward, avoiding Idaho Falls.

Mayes, who is also a cyclist, gave the Fuller Center group a heads up about riding to Idaho Falls.

“I warned them to be careful going over Pine Creek Pass, the road is rough,” he said. “I told them to control their speed, look ahead and avoid potholes. I also suggested that they may want to stop at the ‘angel bike’ on (Highway) 26. To remember the tragedy we had with the Bike and Build group in 2016.”

The ages of the Fuller Center group riders range from mid-20s to about 67.

Schuck said riding across the country has been adventurous.

“We’ve hit some obstacles,” he said. “In Missouri, we had to ford the Flat River three times. It was flooding. In the first place it was about knee deep on me; the second one was about waist deep; and the last one was about ankle deep. With each crossing, it stunk a bit worse.”

Topps said the ride has only had a handful of rainy days. The group described a dramatic ride through the Badlands of South Dakota with storm clouds surrounding them dropping huge hailstones, but never crossing their paths.

Drake said crossing Teton Pass has been one of the highlights of the trip.

“Coming down and looking at the Tetons and coming down off the pass, you can’t describe that, it’s so beautiful,” Drake said. “You really learn to appreciate what God has created. It's a beautiful thing.”

From Idaho Falls, the group rides to Arco, then Carey, then Nampa and on to Bend, Oregon. A sag wagon leads the riders out and stops about every 20 miles to provide snacks and water.

Topps said, although she misses her husband, the ride has been a “bucket-list trip” for her.

“It's something I’ve always wanted to do,” she said. “It doesn’t matter how hard it is. The more challenging it is the more rewarding it is.”

For information on the Fuller Center Bike Adventure, go online to my.fullercenterbikeadventure.org.