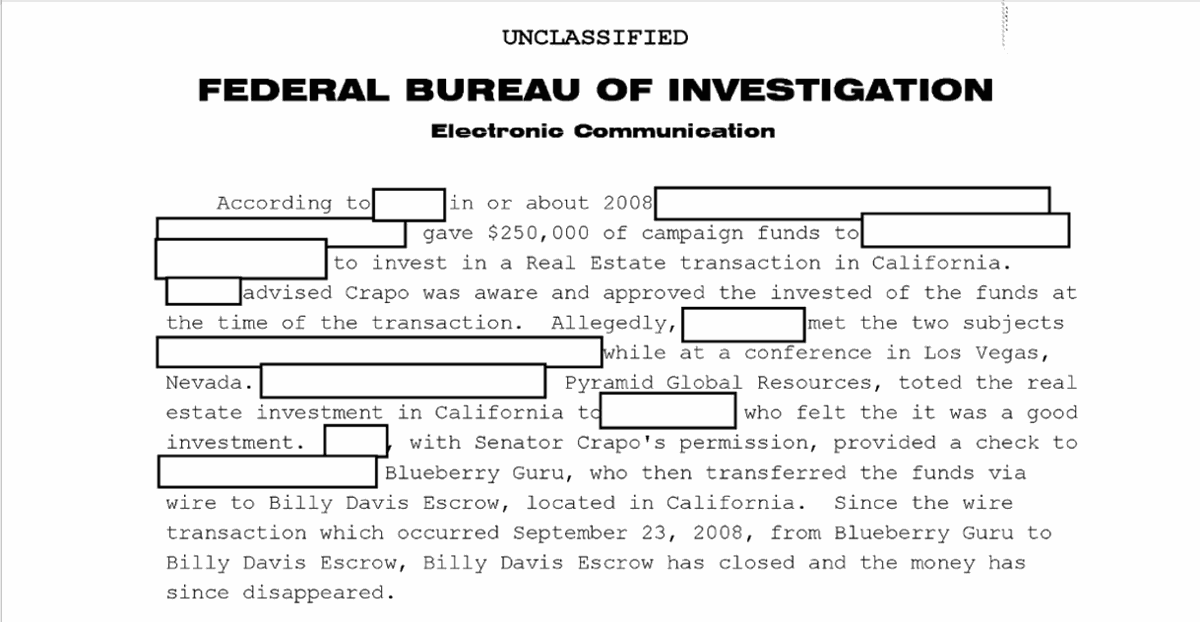 This excerpt is from an unclassified FBI electronic communication dated July 30, 2012, obtained by the Campaign for Accountability under the Freedom of Information Act. It describes a complaint received from representatives of Sen. Mike Crapo about the loss of $250,000 in campaign funds in an investment scam in 2008.

This excerpt is from an unclassified FBI electronic communication dated July 30, 2012, obtained by the Campaign for Accountability under the Freedom of Information Act. It describes a complaint received from representatives of Sen. Mike Crapo about the loss of $250,000 in campaign funds in an investment scam in 2008.

BOISE — Newly released FBI documents say that Sen. Mike Crapo’s campaign told the FBI that the senator “was aware of and approved” the investment of a quarter-million dollars of his campaign donors’ funds into a risky get-rich-quick scheme “at the time of the transaction” in 2008, in which the money disappeared.

“Is he lying, or was his staffer lying to the FBI?” asked Daniel Stevens, executive director of the Campaign for Accountability, which obtained the FBI documents under the federal Freedom of Information Act. “It is a crime to lie to the FBI.”

Asked for comment, Crapo on Monday provided this statement from Stephen Ryan, a Washington, D.C., attorney who represents both the senator and his campaign: “While Senator Crapo had discussed overall investment strategy with his then-campaign manager, he did not have knowledge of nor give permission for the loan in question. It was only months later as his then-campaign manager prepared to leave the campaign employ that the individual acknowledged to the Senator the nature of the loan and what had happened.”

The former campaign manager, Jake Ball, who now works in the private sector, said Monday he didn't remember if he'd talked with the FBI seven years ago. Asked if Crapo gave him permission for the investment, he said, "It was implicit because he trusted me to carry out the investment tools, but not specifically for that particular item, no."

The FBI documents say a campaign staffer, whose name was redacted, told the agency he sent the check for the deal “with Senator Crapo’s permission.”

Crapo’s loss wasn’t revealed publicly until 2013, when he filed amended campaign finance reports with the Federal Election Commission for 2008 and 2009. Documents showed Crapo’s then-campaign manager, Ball, invested the money into the scheme at a time when the campaign was between treasurers. In the new documents, the campaign staffer whose name is redacted says he heard about the investment opportunity at a conference, and it promised a $3 million return within two to three months.

Ball subsequently went to work as district director for then-1st District Congressman Raul Labrador in 2011; Crapo later said he advised Labrador of the matter then. When the news of the loss broke in 2013, Ball quit his job with Labrador.

Crapo, who now chairs the Senate Banking Committee, said in 2013, “I was not asked about nor approved this loan, and am certainly disappointed that the money was lost. This circumstance occurred during a period of transition between treasurers. I have ensured that the campaign has made the appropriate adjustments to prevent this, or anything similar, from happening in the future.”

No one ever was prosecuted for the scam, though the new FBI documents show it was part of a $5.2 million investment scam centered in California with multiple victims, and that it was the subject of a federal grand jury investigation. The Secret Service also was involved in the investigation, according to the documents; however, after the investigation, federal prosecutors declined to prosecute anyone.

The scheme is variously referred to in the documents as a real estate scam and a “currency exchange transaction.”

The Campaign for Accountability, a watchdog group based in Washington, D.C., has been sharply critical of Crapo both for this and for several other campaign finance matters, including his free use of a lobbyist’s Washington, D.C., condo for 81 campaign events, over which the group filed an FEC complaint in 2018. It was the same condo where then-EPA Administrator Scott Pruitt had lived in a cut-rate rent deal; the group was investigating Pruitt when it ran across Crapo’s involvement.

After the complaint, Crapo’s committees reimbursed the lobbyist for $100 per meeting and filed amended FEC reports.

The group also filed an ethics complaint against Crapo over paying his wife Susan just over $6,000 for work she did for Freedom Fund, Crapo’s leadership PAC (political action committee), in 2017 while not listing the PAC as an employer of hers. Crapo subsequently filed an amended disclosure form to include the employment.

“As the top senator who is in charge of overseeing banking policy in the United States, you would hope that Sen. Crapo would have the financial knowledge to make sound investments for his own campaign money,” Stevens said. “I find it highly concerning that he would approve his campaign to loan out $250,000 in a get-rich-quick scheme at the height of the financial crisis.”

According to the FBI documents, the campaign, “With Senator Crapo’s permission, provided a check to Blueberry Guru,” a now-defunct limited liability company, “who then transferred the funds via wire to Billy Davis Escrow, located in California.”

The documents show that the investment was to be handled by a now-defunct Nevada company called Pyramid Global Resources.

A July 25, 2012, FBI document states that a Crapo campaign staffer whose name was redacted met two people at a conference in Las Vegas, who touted a “real estate investment in California” to the staffer, who “felt that it was a good investment.”

On Sept. 20, 2012, at an interview at the FBI’s offices in Boise, a Crapo staffer whose name was redacted told the FBI that the money would be “placed in escrow for two to three months and then would be returned with interest,” and “admitted he did not really understand the investment well, but figured since the money was going to be placed in escrow it would be safe.”

The staffer “understood the investment to be some type of currency exchange in which the returns were very high,” and that a “$250,000 investment would return approximately $3 million in or about a two or three month period.”

The staffer also told the FBI that someone associated with former Idaho Sen. Larry Craig “had been a former investor,” and said “they appeared to have a track record for doing financial transactions and seemed to be a valid company.”

“Everything appeared to be going fine, and then one day the money was gone,” the staffer told the FBI.

The staffer said “at one point, a Secret Service agent had become involved in the investigation,” and that the staffer “recalls being told the money at some point was transferred out of the country and the Secret Service could no longer track the money.”

On Jan. 15, 2013, the FBI documents show the agency was informed by federal prosecutors that they’d declined to prosecute the case. “The matter was declined due to previous declination by the district of California and that California would have jurisdiction over the violations reported,” the documents state.

“Five years after the fact, the public finally finds out about this loan that went bad,” Stevens said. “There are so many questions about this bad financial deal that it prompted us to go back and look into it.”

The Campaign for Accountability filed FOIA requests with the FBI, “because Sen. Crapo had said he asked the FBI to look into it,” Stevens said. “Lo and behold, it turns out the FBI had in fact determined a couple of notable things that had not been public until now.”

The group is a 501(c)(3) nonprofit that has filed complaints against members of both political parties.

Stevens said he’s never seen a comparable investment of campaign funds into “something that smacks of snake-oil sales. … You just don’t see that in campaign finance issues.”

Especially troubling, he said, was the fact that it involved “someone who regulates the banking industry, regulates processes for preventing fraud.”