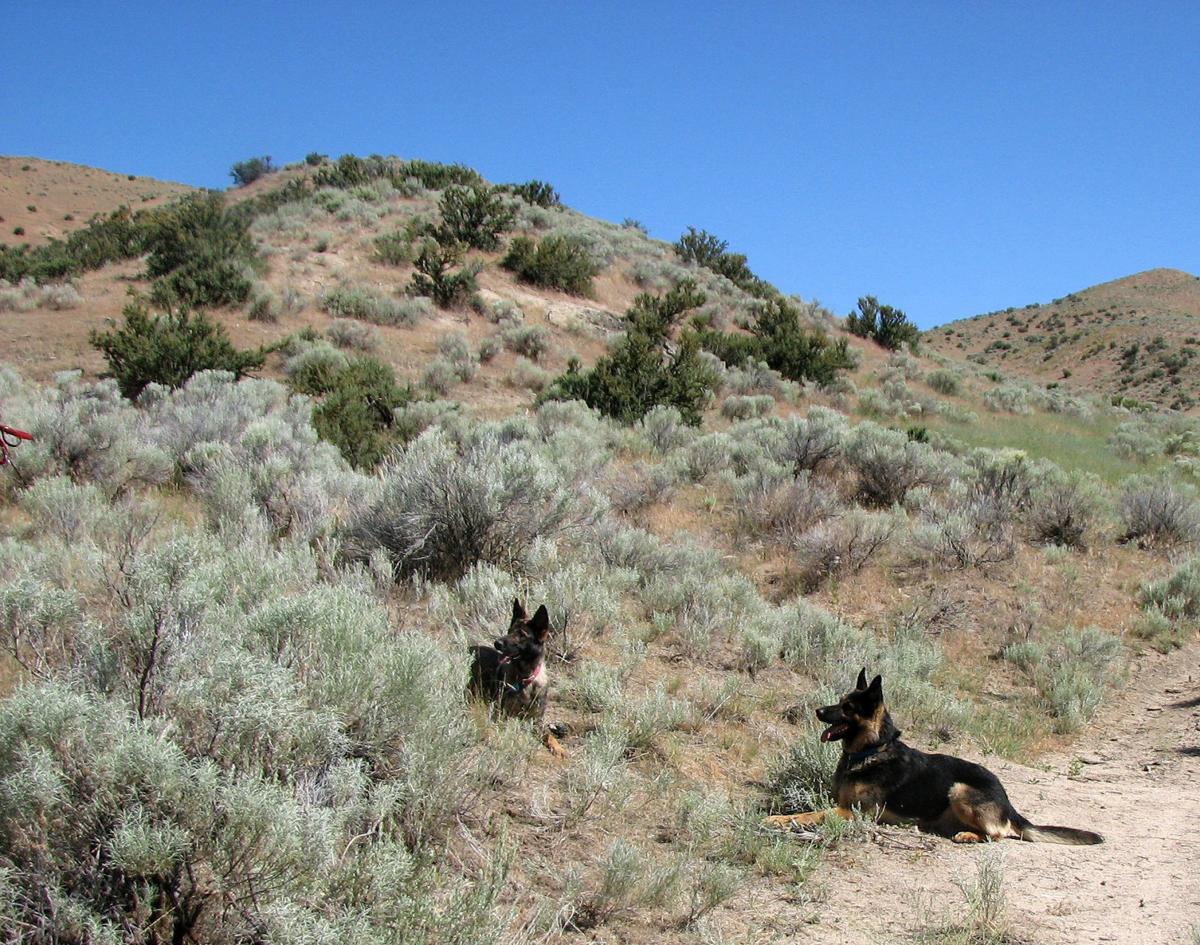 Cadaver dogs lay down after finding human remains along the Oregon Trail in Idaho. 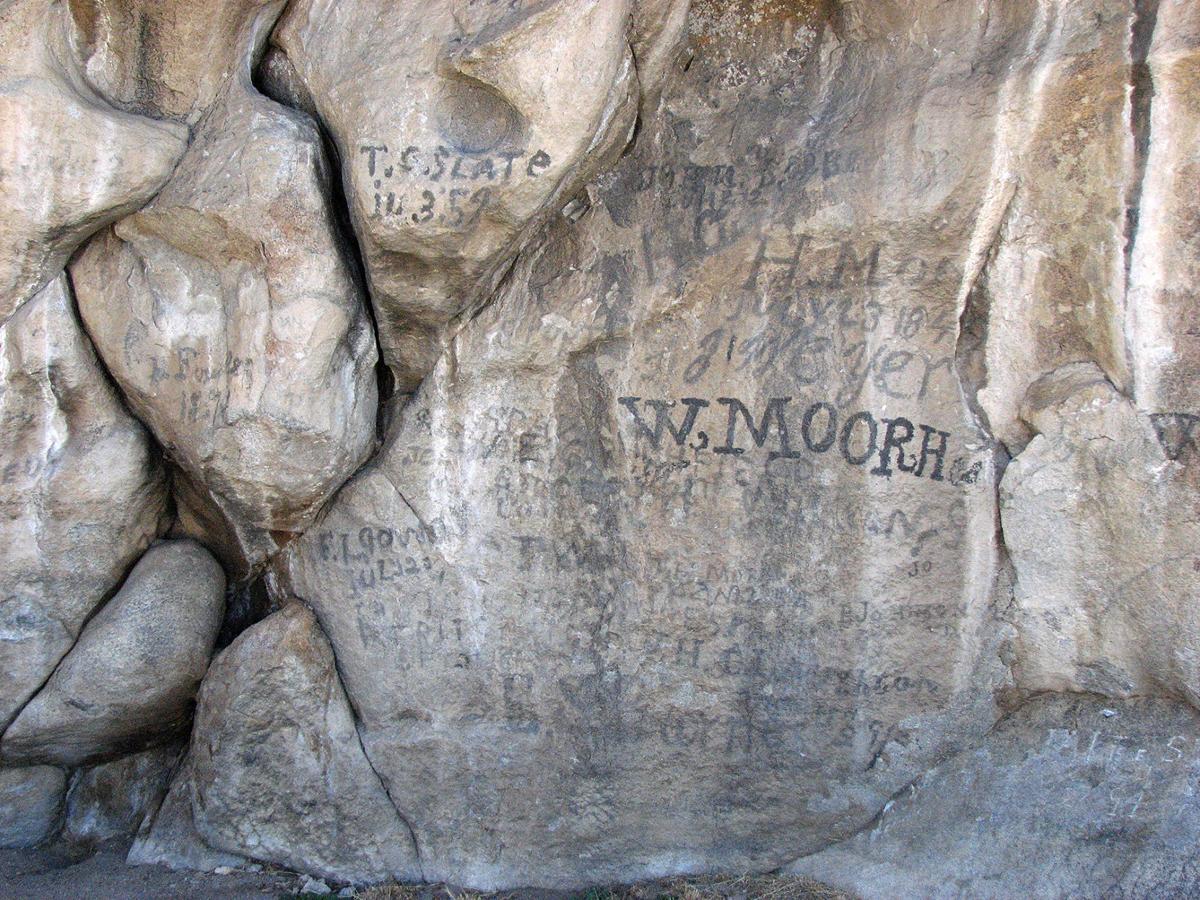 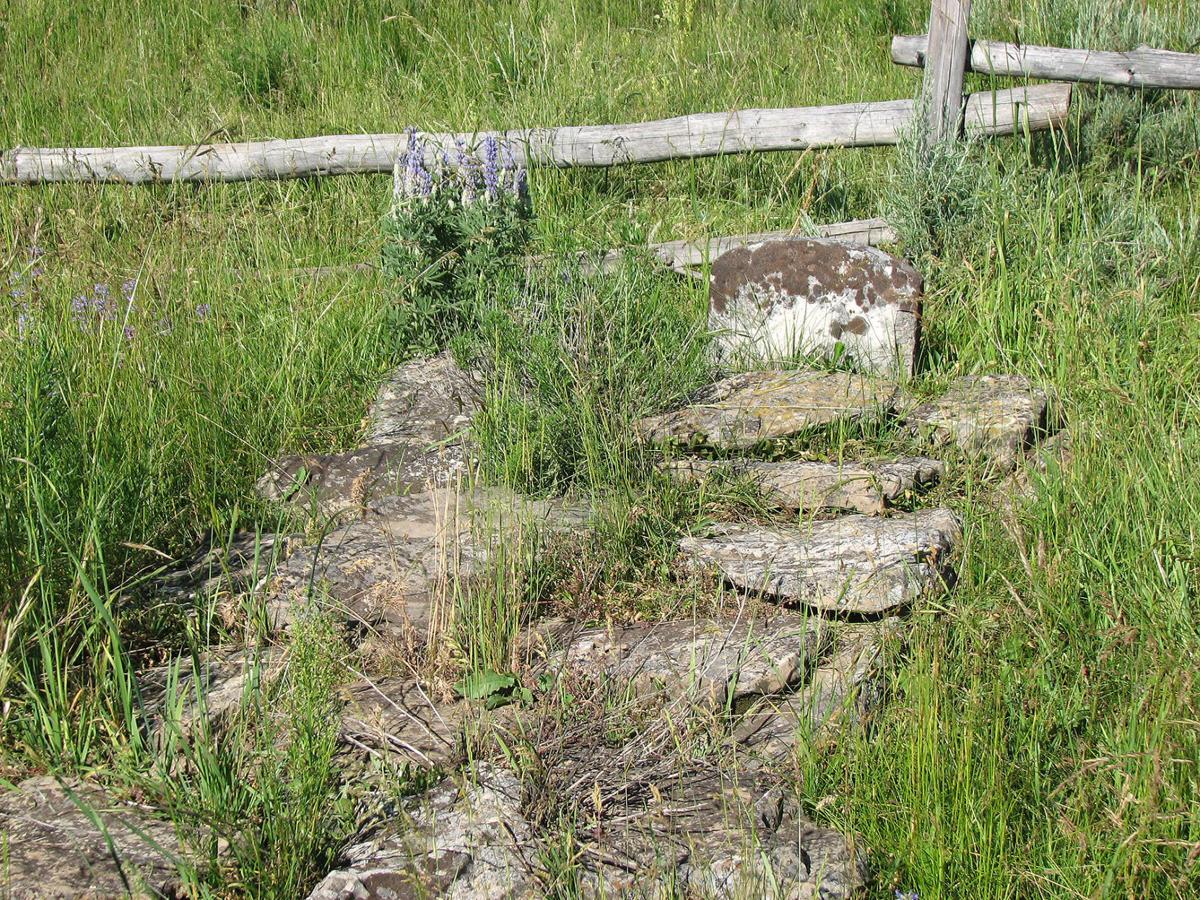 A gravesite along the Oregon Trail is marked with stones.

Cadaver dogs lay down after finding human remains along the Oregon Trail in Idaho.

A gravesite along the Oregon Trail is marked with stones.

It’s a hunt for dead bodies.

Cadaver dogs will be out combing and sniffing Idaho’s sagebrush land at the City of Rocks National Preserve for the scent of decomposing humans. They aren’t employed to solve a recent crime, but to add clues to part of Idaho’s tragic past when emigrants passed through the area in wagon trains and succumbed to a number of ever-present woes: bad water, hostile attacks, sickness, starvation or accidents.

Emigrants had two main destinations in mind when they passed through Idaho in the mid 1800s: the free land in Oregon territory or gold in California.

Self-professed diary reader and president of the Idaho chapter of the Oregon-California Trails Association, Jerry Eichhorst, said members of his group will join the assistant City of Rocks manager Tara McClure-Cannon in May to investigate suspected graves along the California Trail where it heads south into Nevada.

“We will be doing some cadaver dog work on some suspected graves that we found last year working with the park archaeologist,” Eichhorst said. “Then we’ll do a little metal detection checking some of the camping areas on the California Trail."

The two German shepherd dogs he’ll be working with are owned by Debra Hurlbert of Driggs, an expert in cadaver dogs training. Hurlbert was recently in Texas training other dogs and their owners at a cemetery plot.

“These dogs are amazing,” she said. “They can detect human remains from hundreds of years ago.”

McClure-Cannon said some potential graves have been identified near Camp Rock at the preserve. “(The association) was out in the field near Camp Rock last year and they found some rocks that were in the alignment that you would expect (with graves).”

Eichhorst said it’s fun watching the dogs and their owners go to work.

“They like working with us because there’s no pressure,” he said. “It's not like they’re looking to solve a crime. These bodies aren’t going anywhere and there are no families waiting for the results. The dogs can pick up the scent. They are trained on bones that date back to 1,300 AD. They can easily find the scent. We'll go out and show them an area where we think there is a suspected grave, and she’ll tell the dogs to go search, and they’ll run around, if they spot the grave they give their indication, sit down or lay down.”

Eichhorst has been investigating Idaho’s historic trails for more than two decades. Besides hiking around the routes, one favorite tool is reading diaries of the emigrants.

“I’m a diary researcher,” he said. “I have 2,400 accounts of people who crossed Idaho. I compile these diaries by location. I get some of the best stories by location. I’ve also been able to find the correct route of the North Alternate Trail based upon the diaries. The original identified route was actually incorrect.”

The North Alternate Trail departed from the main Oregon Trail near Hagerman and roughly paralleled the northern side of the Snake River before rejoining the main trail east of Mountain Home. It was the deadliest section of the trail in Idaho with dozens of bodies, some buried in mass graves, located along the route.

“The point where (emigrants) reached Clover Creek was about 60 miles to the west were references of 10 to 14 deaths and burials and graves at each of the camping sites,” Eichhorst said. “Idaho didn’t have those kind of deaths anywhere else. That was from bad water. They drank the water of Clover Creek. By July, August or September time frame, Clover Creek is a slow meandering stream with a lot of beaver dams on it. It would be really grungy with algae and E. coli and giardia and everything going in it. So the people would drink it, get sick, get diarrhea, dehydrate and die. I (found) what appears to be a mass grave area with about 45 graves in it. I have a diary reference at that point that talks about a massacre in that point in 1858."

Eichhorst has also worked with archaeologists from Utah State University who have checked the area with ground-penetrating radar and a magnatronmetre. Checking for human remains on the North Alternate Route proved eye-opening.

“We confirmed a mass grave that we’ve known about a half a mile away,” Eichhorst said. “We confirmed 7 bodies. In that mass grave, you can see the white orbs on the (ground penetrating radar). Next to it about 30 feet away there’s another mass grave with another 7 bodies that we really weren’t sure about before.”

A recent project by the National Park Service and commissioned by Congress to catalog and include other historic route segments into the park’s system has proved frustrating for members of the Oregon-California Trail Association, particularly in Idaho. Additional trails such as the North Alternate Route and Goodale’s Cutoff are not recognized because of their dates of use.

The park service’s findings were turned into Congress in January.

According to Eichhorst, the study’s findings were flawed from the beginning. Congress defined the Oregon Trail through 1848, even though 40% to 50% of the emigrants arrived in Oregon after that date.

“Congress said, no you can’t expand the dates from 1848 to 1860 because we initially set it up that the Oregon Trail was to 1848 and the California Trail was from 1849 to 1860," he said. “(The North Alternate Route and Goodale’s Cutoff), even though they met all the criteria, they were after that 1848 cutoff date that Congress has designated in the original act back 30 years ago. Absolutely it’s arbitrary.”

Eichhorst said he hopes to reach out to Idaho's Congressional representatives and see if the dates can’t be changed “because those are two of the most significant routes of the Oregon Trail across Idaho.”

The National Park Service has recommended adding a segment in Idaho to the Historic Trail system called the Lander Cut-off trail found in eastern Idaho. The route enters Idaho north of Thayne, Wyo., heads east to just south of Grays Lake National Wildlife Refuge, then south to the Soda Springs area where it connects with the main route.

"There were a lot of people who were disappointed when it was announced last week at the (Oregon-California Trails Association) board of directors meeting about all the things that weren’t passed,” Eichhorst said recently. “There were a lot fewer additions to the National Historic Trails than what was expected.”

BOISE — When Brian Marinelli joined the Idaho Mountain Search and Rescue Unit about two years ago, he never thought he’d become a handler for …