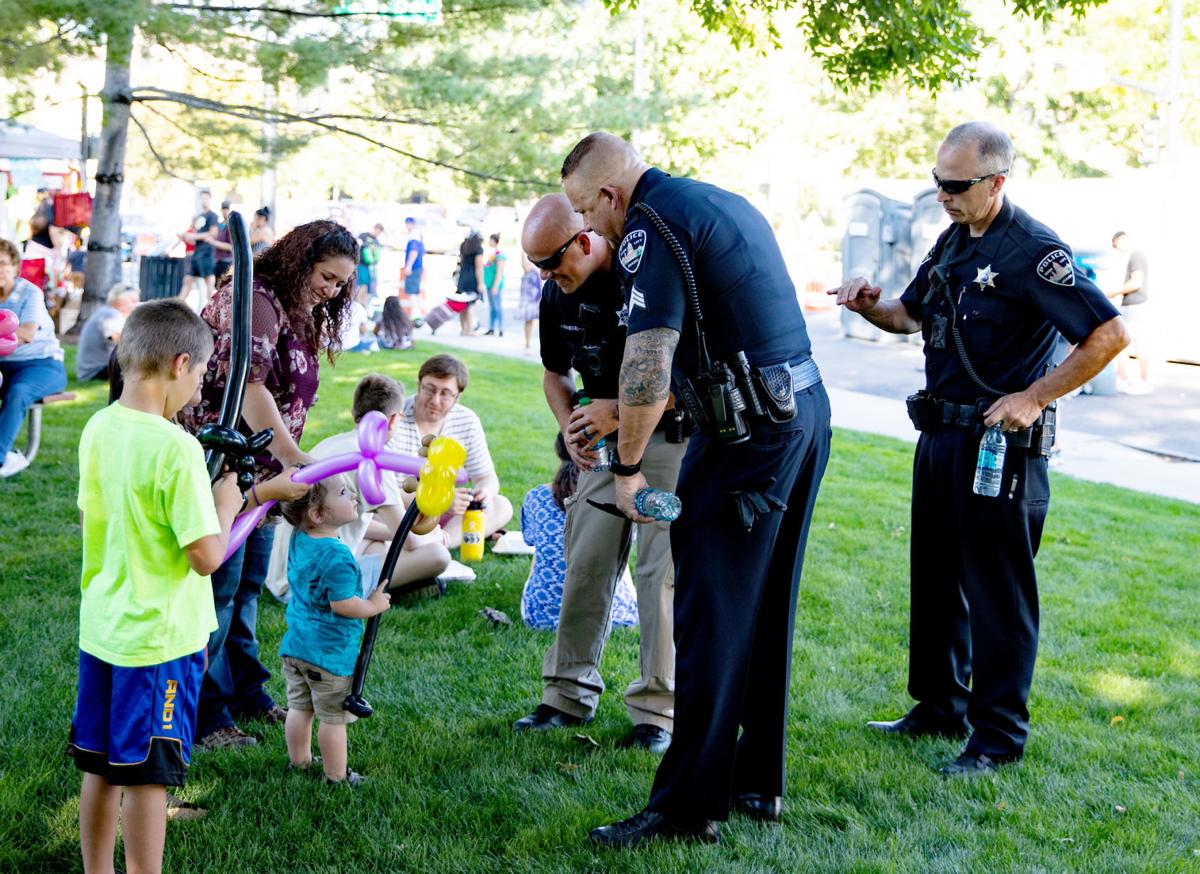 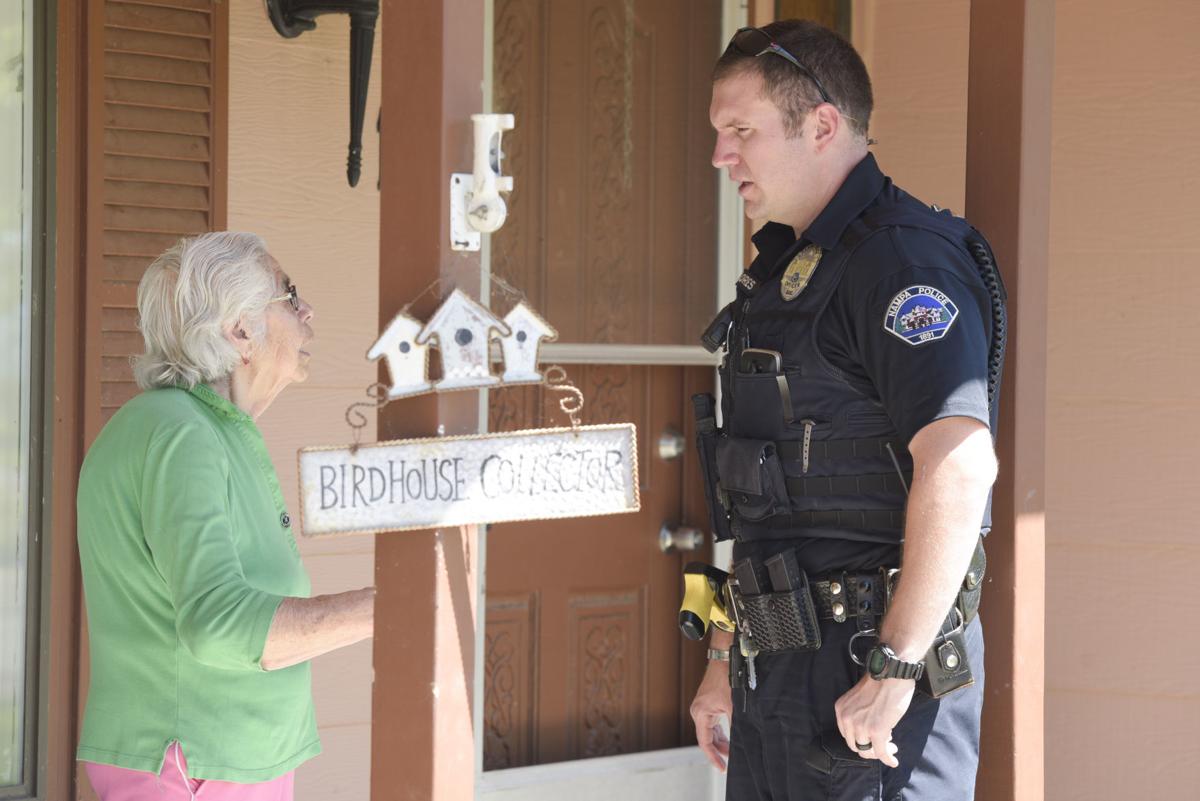 Nampa Police Officer Mike Flores is called in as an interpreter for a woman who only speaks Spanish for a domestic situation in Nampa on June 21, 2018.

Nampa Police Officer Mike Flores is called in as an interpreter for a woman who only speaks Spanish for a domestic situation in Nampa on June 21, 2018.

NAMPA — For Boise Police Officer Ed Moreno, the decision to become a police officer happened early on, inspired by a baseball coach who was also a sheriff’s deputy.

Moreno said his coach, Greg Ceballos, would sometimes invite his friends from the sheriff’s office to come to games or play catch with the players in his small agricultural hometown outside of Fresno, California.

“When you are 10 to 12 years old, someone like that makes a big impression on you,” Moreno said.

Now, Moreno serves as the Hispanic liaison for the Boise Police Department. Like Ceballos, he connects with kids through sports by playing in the annualvsoccer game with police and the Mexican Consulate, and participates in other outreach events.

“The future Hispanic officers are at the events we participate in,” he said. “I am hoping the kids see me along with the other officers and see themselves applying with the Boise Police Department in the future.”

Moreno’s outreach efforts won’t pay off for a few years — “recruiting is a long game,” he said.

In the meantime, another movement is gaining steam statewide to help build trust and understanding between police and Latino communities. The Idaho Commission on Hispanic Affairs, a nonpartisan state agency, has been traveling the state over the last few months to encourage law enforcement agencies to participate in a new law enforcement summit planned for Boise next summer.

“We hope no one sees this as a negative,” he said. “It is really us trying to bridge the two so that people feel comfortable and see the police as a friend.”

A “red flag” Saldaña has seen, he said, is a hesitancy among Latino residents to call police.

“We do not want our community to be scared to call law enforcement when they need help and don’t want them to see police as a threat,” he said. “...We have had one law enforcement agency tell us, ‘Well, we don’t get any calls from the Hispanic population, so everything is cool.’ That is a red flag — that probably means there are some situations that are not getting reported.”

No complaints of racial profiling have been filed with law enforcement agencies in Meridian, Caldwell, Canyon County or Ada County over the last year, according to public records requests. Nampa did not provide a response to the record request made Aug. 26 by end of day Friday.

Moreno said he has seen a divide between the judicial system and the Latino community. In his experience, he said, Latinos are often eager to provide information about a crime to officers, but don’t want to get heavily involved, such as characterizing themselves as crime victims or going through the court process.

Boise, Nampa and Caldwell police departments are among the agencies that have committed to attend next year’s summit, though details are still in the works. The Ada County Sheriff’s Office and Idaho State Police also plan to attend.

DIVERSITY IN THE POLICE FORCE

Numbers from local agencies and the Census Bureau show the under-representation of Latinos in law enforcement:

“The number of Spanish-speaking officers does not mirror the Hispanic population of our community,” Nampa Capt. Curt Shankel said in an email. “This is an area we are working to improve our outreach and recruiting.”

Idaho State Police offers a 30-cent-per-hour bump in pay for those who can speak Spanish; ISP spokesman Tim Marsano could not provide the number of officers who receive the bump.

For Caldwell, which recently lost two Latino officers to retirement, raising pay for all officers is a goal rather than creating an incentive for just bilingual officers.

“We’re always looking for people who fit the culture here and are going to serve the public,” said Caldwell Police Chief Frank Wyant. “I think it is super important to reflect your community.”

Recently retired Judge Sergio Gutierrez, who was Idaho’s first Latino judge, said he has seen an improvement in the hiring of Latino and bilingual officers in the Treasure Valley, though “there is continued work to be done.”

“That is where we have progressed,” Gutierrez said, noting local events. “But there is the continued work to be done. You have Latinos who are not very confident in dealing with government in general, and in particular, with law enforcement.”

He said the lack of confidence in law enforcement in immigrant communities may have something to do with how police are perceived in the countries the immigrants left.

Natalie Camacho Mendoza, city of Boise director of the Office of Police Oversight and owner of Camacho Mendoza Law Office, said community policing is a priority for the Boise Police Department, meaning police try to work with communities to decrease crime and restore confidence in officers.

The city of Boise’s Office of Police Oversight exists as a separate entity to review and investigate complaints of misconduct by Boise police. Mendoza said people can file complaints with her office or with the department.

“We exist to help be a bridge between the community, the city and law enforcement,” Mendoza said.

The implicit bias training aims to help officers realize the unavoidable subconscious human biases they have and the ways in which those biases might affect their actions as police officers. The training began in 2017.

“It will be a challenge for a while, but building bridges and being intentional will help,” Mendoza said. “But we have to have constant dialogue.”

A recent set of Facebook videos by state Rep. Chad Christensen (R-Ammon) in which he attempts to defend constituents’ gun rights have drawn at…