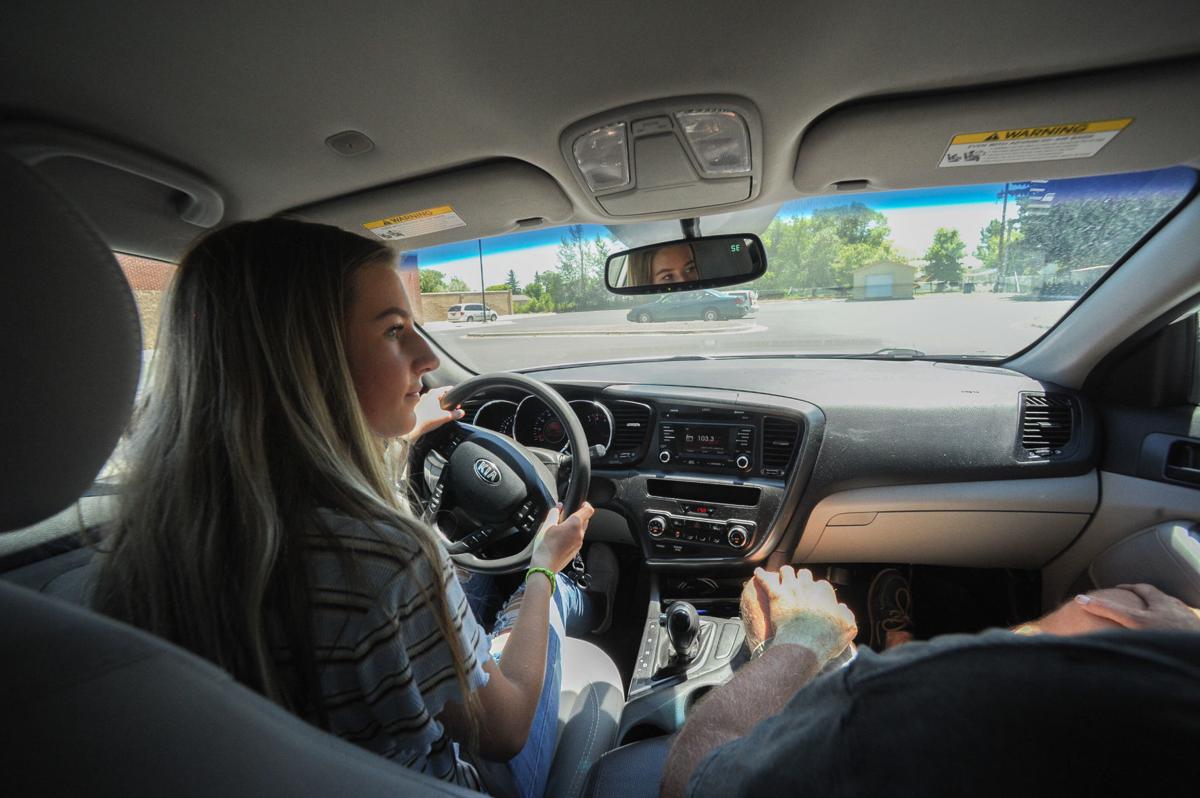 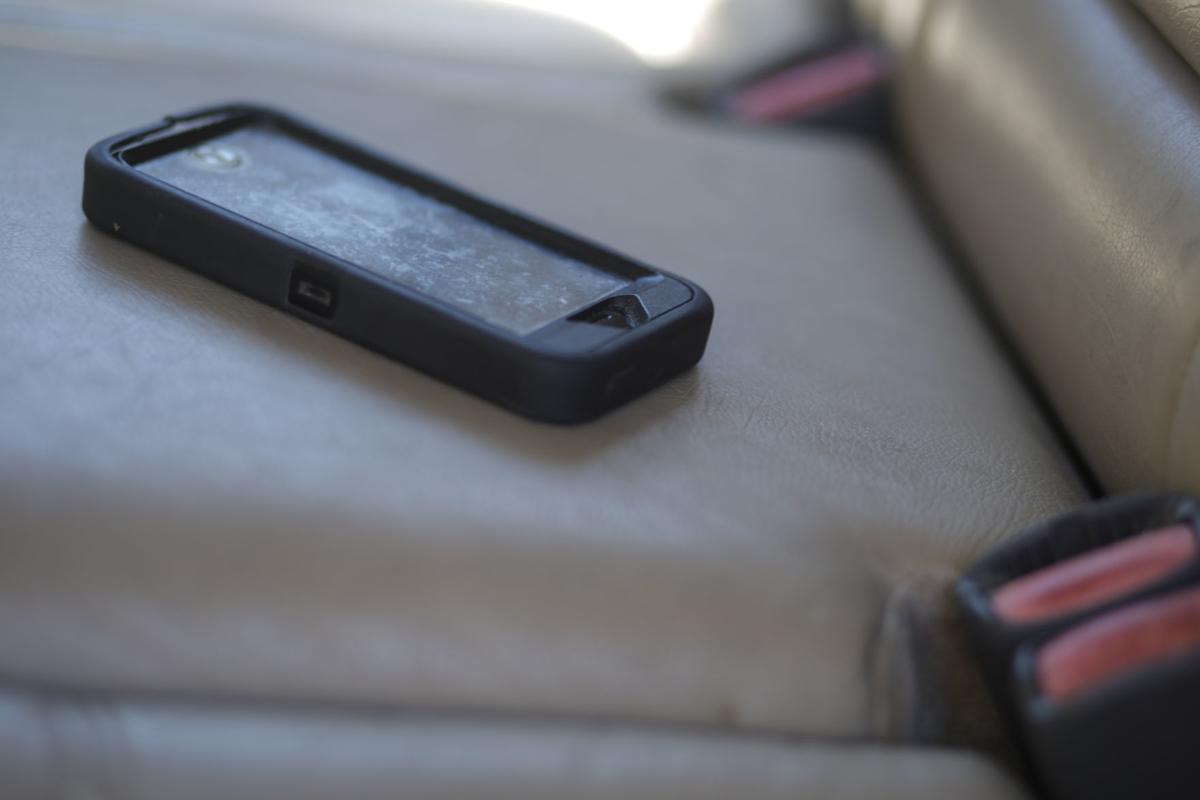 A cellphone is seen in the back seat of a car on Thursday, July 11, 2019. AAA and Geico suggest drivers put phones in the back seat to help avoid the urge to use them while driving. It takes five seconds to read a text; that time, going 55 mph is “like driving the length of an entire football field with your eyes closed,” according to the the National Highway and Traffic Safety Administration website.

A cellphone is seen in the back seat of a car on Thursday, July 11, 2019. AAA and Geico suggest drivers put phones in the back seat to help avoid the urge to use them while driving. It takes five seconds to read a text; that time, going 55 mph is “like driving the length of an entire football field with your eyes closed,” according to the the National Highway and Traffic Safety Administration website.

The afternoon before Andy Weller began working with the students in his driving class, he decided to run a quick experiment on distracted driving.

Weller set up a chair in his front yard on a Monday and spent an hour watching the cars driving down his street on their way to and from McCowin Park. He wanted to see how many drivers in the neighborhood had their cellphones out while behind the wheel.

Many drivers were still using their phones, which didn’t surprise Weller. However, he told the 17 driver’s education students gathered in the classroom at Hillview Elementary School, the biggest offenders weren’t teenagers or other students around their age. It was parents, often with young children in the car next to them, who he saw using their phones the most often.

“Parents are supposed to be setting the example for everyone else, and they’re not,” Weller said.

The lesson on distracted driving is how Weller leads off all the driver’s education classes he teaches at BW Driving school. Before the students ever get behind the wheel or open a driver’s manual, he wants them to understand the risks offered by their smartphones.

The two-week summer course is the first time many of the students will learn about the road laws in Idaho or spend significant time behind the wheel. The risks of driving with their phone out, however, are nothing new.

“I’m pretty sure that everyone my age knows that phones can be a danger,” Bethany Baker, a 15-year-old at Thunder Ridge High School, said.

Bethany and the other students agreed with Weller’s observations. When asked about who they saw on their phones while driving, six of the students said their friends text and drive. Fourteen said their parents did.

Christina Handy, a Hillcrest High School sophomore, said she would sometimes have to yell at her mother to get off the phone while waiting at a stoplight. For the most part, though, her friends and her older siblings seemed good at avoiding distractions.

“I only have two friends that are already driving, and they’ll hand their phone over to me so I can play music when we’re driving together,” Handy said.

New drivers normally face a higher risk of being in an accident or crash. In 2017, teenagers made up 6 percent of the drivers in Idaho but were involved in more than 13 percent of all crashes.

Distracted driving was the leading contributor to all crashes in the state that year, according to the Idaho Transportation Department, with a connection to one in every six crashes.

“It’s not a question of if somebody is going to run into the road in front of you. It’s a question of when and whether you’ll be ready for it,” Weller said.

Some students in the class had closer connections to the dangers of texting and driving. A friend of Jasmin Powell’s parents was struck and killed by a distracted teenage driver in Rexburg a few months ago. Hearing about the crash scared Jasmin, her twin brother and her mother Nancy away from using their phones.

“I can’t imagine the poor kid who gets in a crash and has to go through their life having killed someone,” Nancy Powell said.

To teach the students the rules of the road, Weller uses the most recent Idaho Driver’s Manual. The most recent edition of that book was published in September, but it’s already outdated on some points. Idaho Transportation Department enacts the new highway rules on July 1, with this year’s biggest change relating to the need to switch lanes to avoid emergency vehicles at the side of the road.

The book also excludes some of the stricter city polices when it comes to phone use. Texting or instant messaging behind the wheel has been illegal across the state since 2012 but other cellphone uses are allowed. Idaho Falls, Pocatello and Blaine County are among the cities and counties that have issued ordinances banning all phone use except for emergencies and some navigation tools.

Efforts to enact a statewide version of the ban have failed to pass in the Idaho House of Representatives in the last two years, as did a bill this year from Rep. Chad Christensen, R-Ammon, that would have overruled all local bans on cellphone use while driving.

The bans in Idaho Falls and Pocatello were enacted in the fall, meaning the classes learning at BW Driving School and other schools in the city are the first to begin driving with no phone use allowed.

Weller, an elementary school teacher at Hillview, founded the driving school along with Greg Black, who also teaches law enforcement driving at the Police Officers Standards Training center during the summer. Classes cost $300, with discounts for referrals and multiple siblings taking the class at once. The school also offers private driving sessions.

BW Driving’s schedule front-loads much of the information about the rules and risks of driving early in the week. The two-week course includes 30 hours of instruction in the classroom, six hours of driving and six hours of observation. Handy agreed that putting off the actual driving for a few days was probably the right move on the driving school’s part.

“You don’t want to have people getting on the road and driving like a maniac,” she said.

At the end of the course, students take a test on state driving laws and sign a pledge to never drive while drunk, high or distracted.

Thursday afternoon was the first time Jasmin, a 14-year-old at Skyline High School, had ever driven a car. As she made slow laps in the neighborhoods around Hillview Elementary, Weller gave her directions on where to go and how best to drive. Occasionally he tried to trick her into reading something off his phone but she and his other students rarely fell for it.

BOISE — A Bonneville County lawmaker has introduced a bill to override local ordinances that ban using a handheld cellphone while driving.