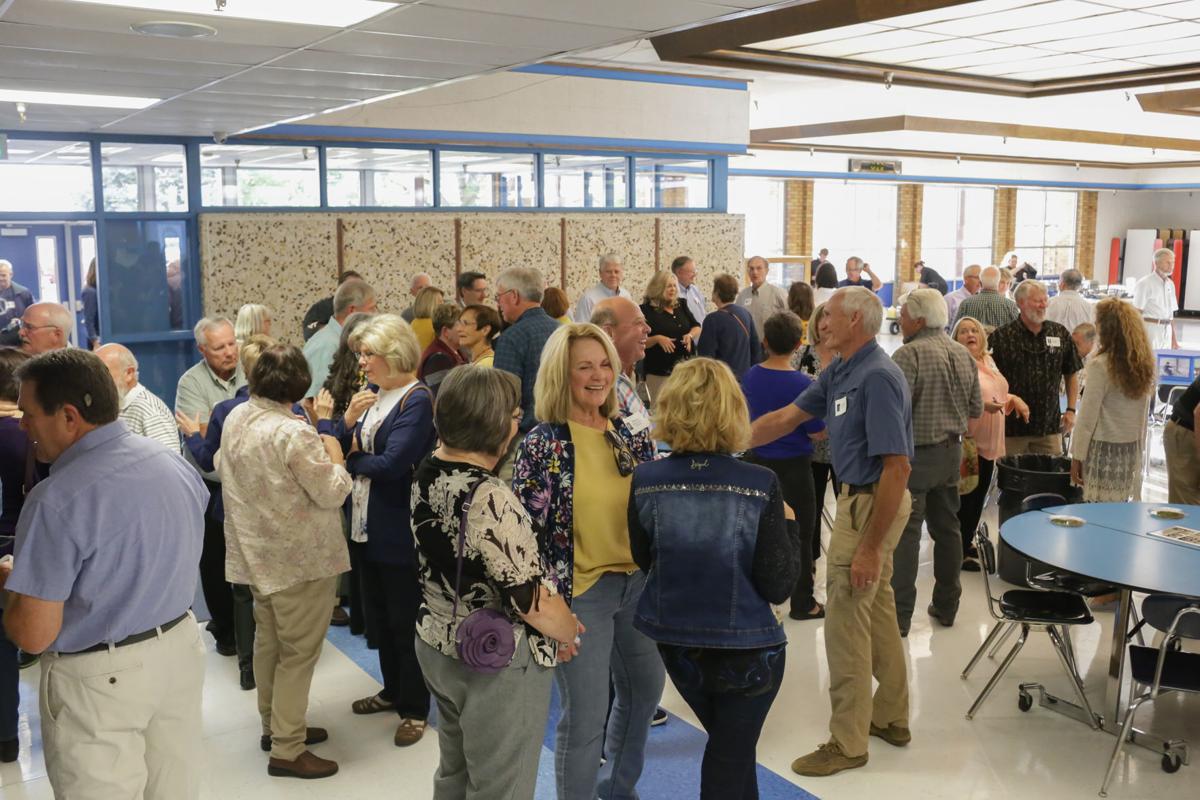 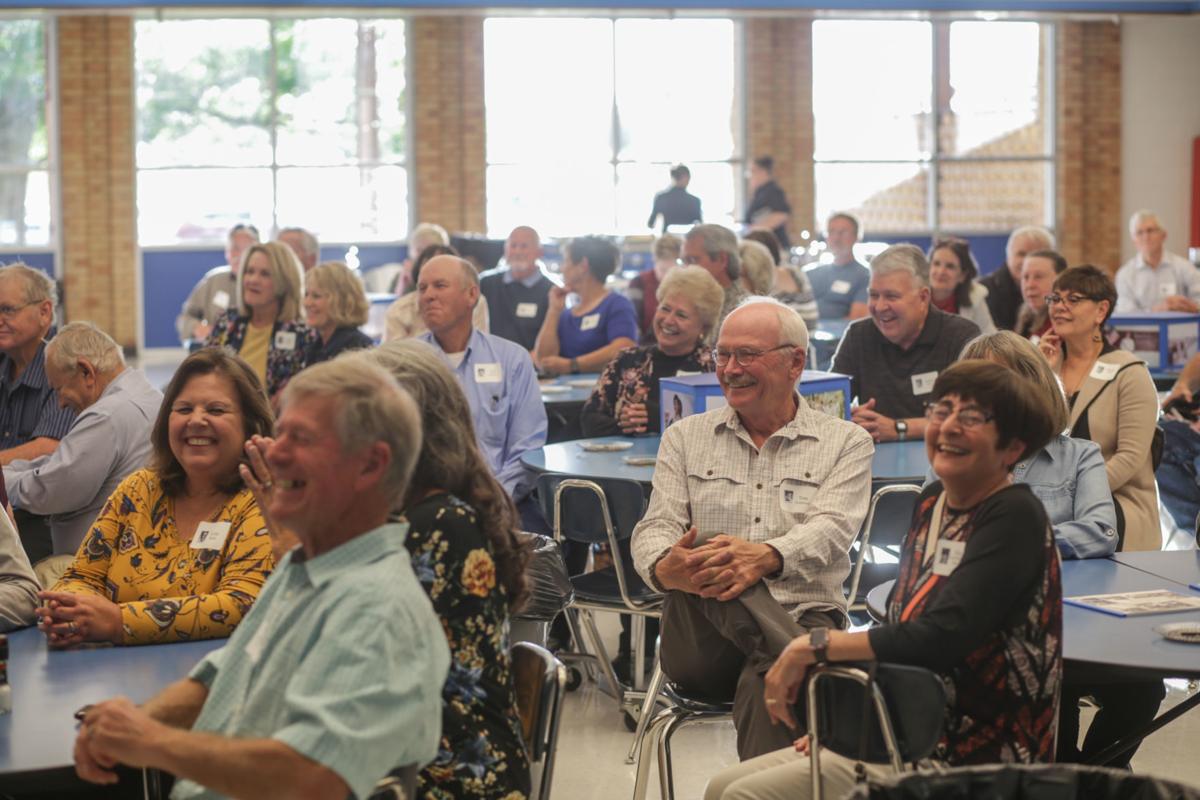 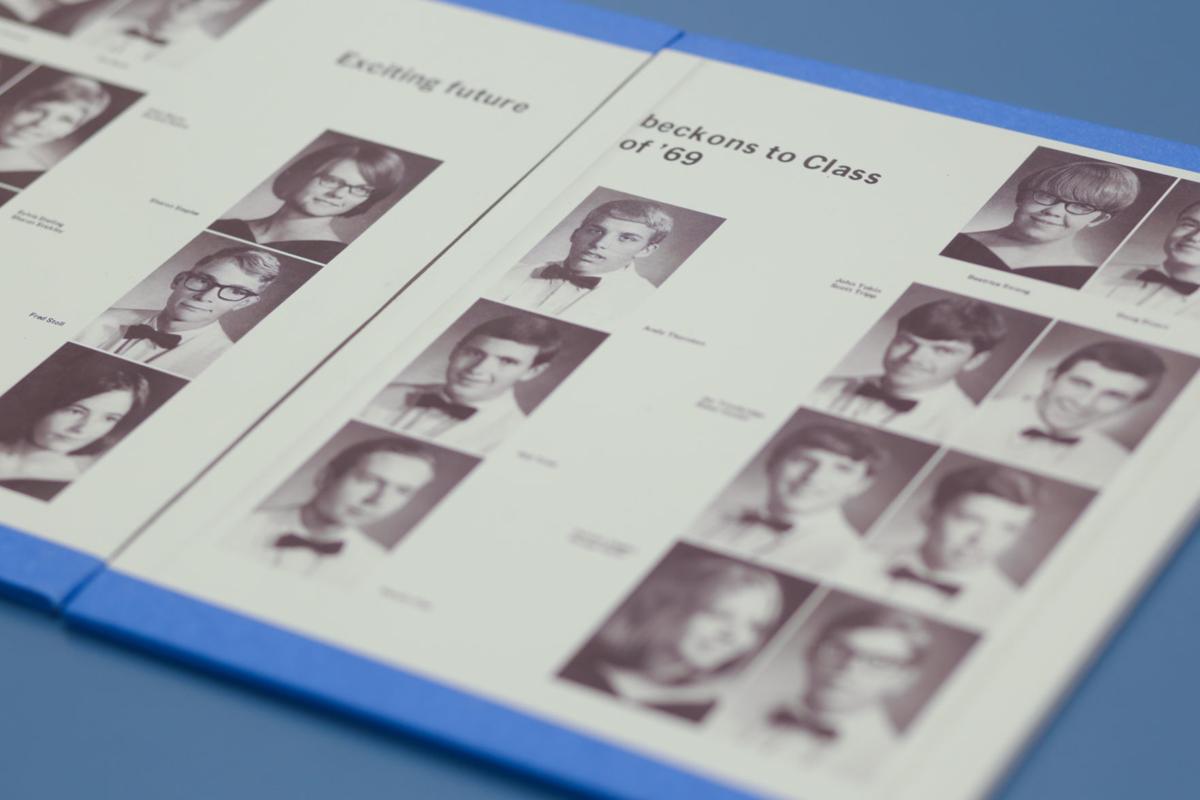 Students of Skyline High School’s first graduating class are seen in a reproduction of their yearbook at Skyline High on Thursday, Sept. 19, 2019. 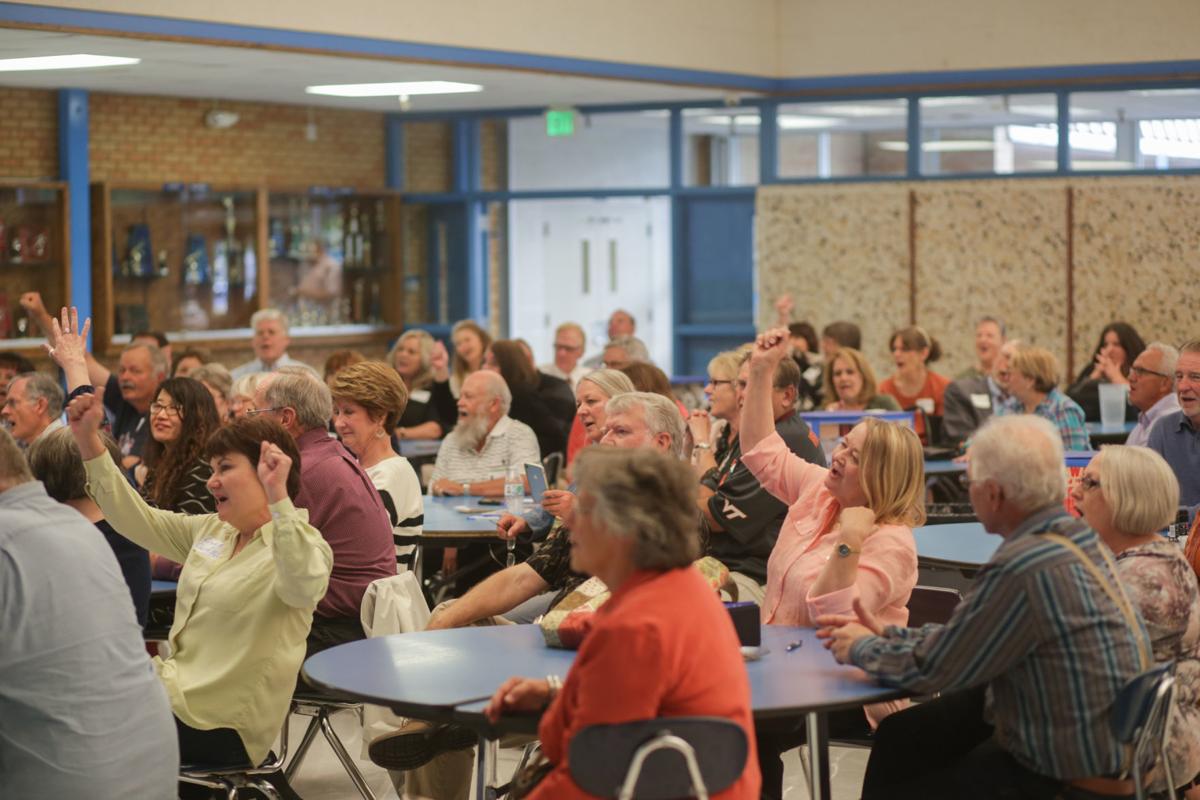 Students of Skyline High School’s first graduating class sing the school fight song during the celebration of their 50-year reunion at Skyline High on Thursday, Sept. 19, 2019. 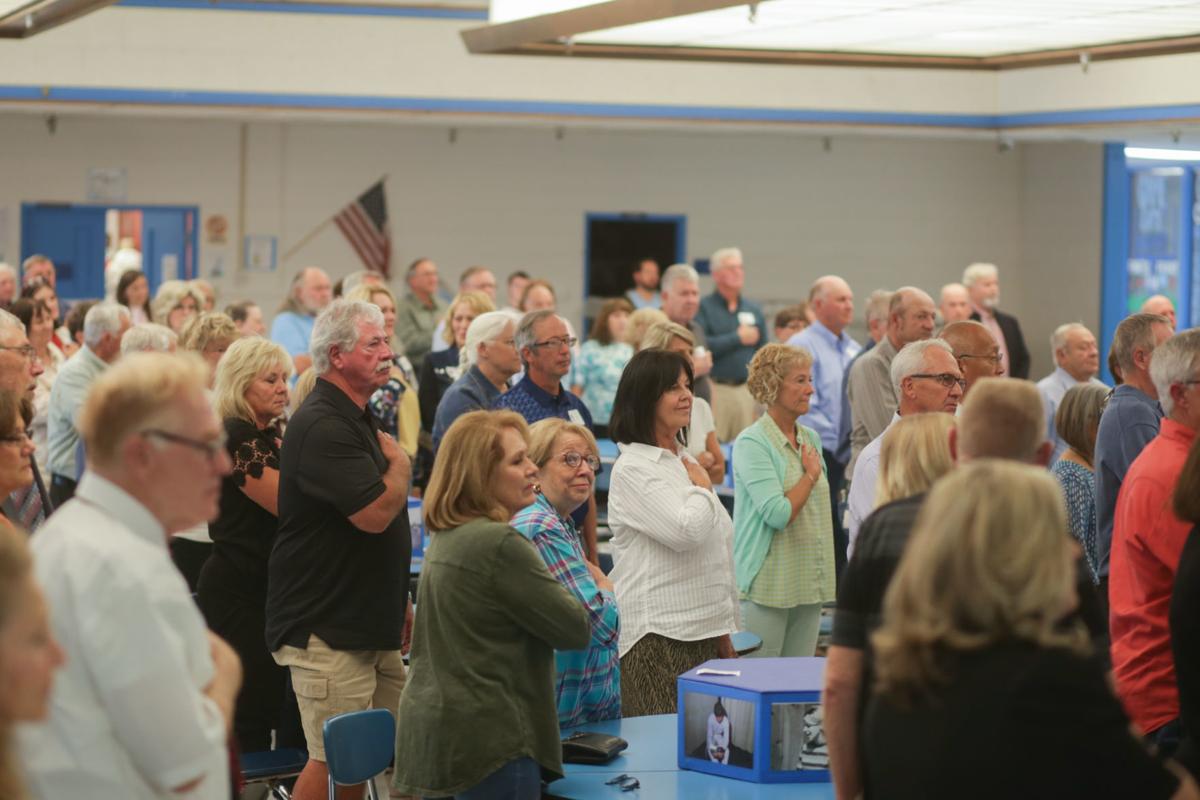 Students of Skyline High School’s say the pledge of allegiance during the celebration of their 50-year reunion at Skyline High on Thursday, Sept. 19, 2019. 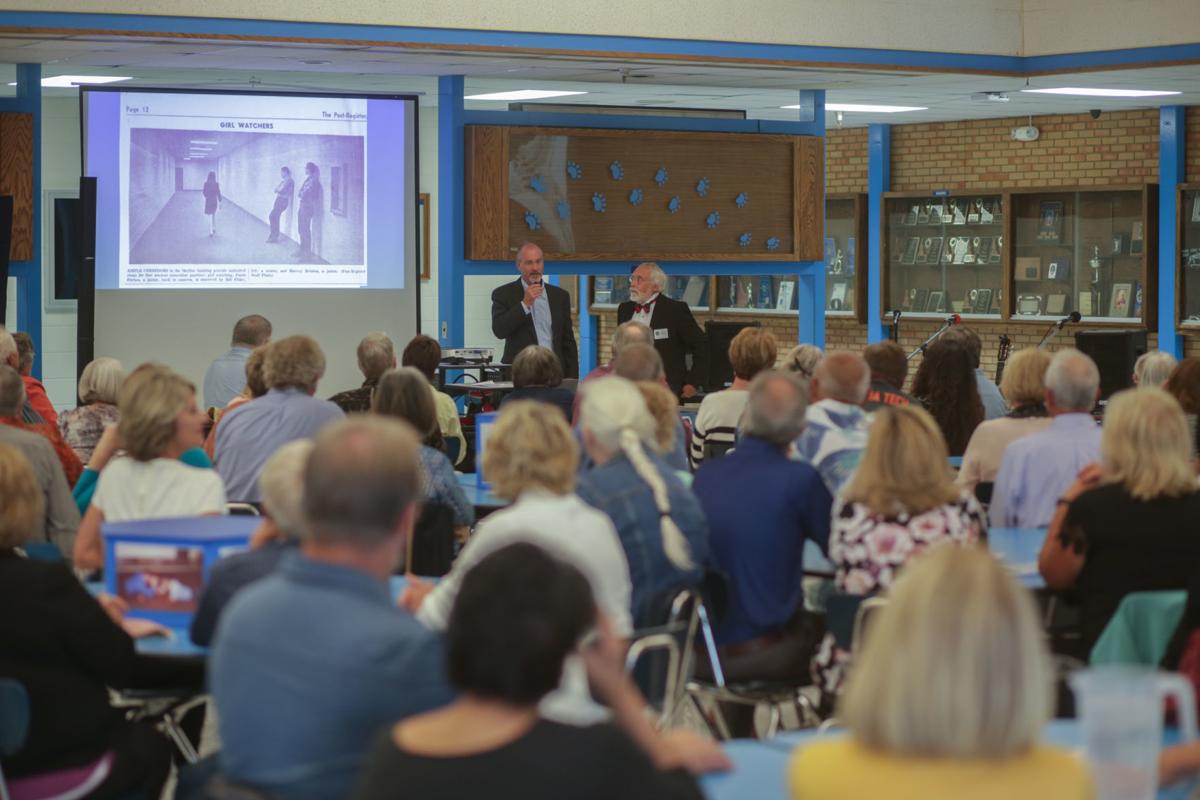 Students of Skyline High School’s first graduating class are seen in a reproduction of their yearbook at Skyline High on Thursday, Sept. 19, 2019.

Students of Skyline High School’s first graduating class sing the school fight song during the celebration of their 50-year reunion at Skyline High on Thursday, Sept. 19, 2019.

Students of Skyline High School’s say the pledge of allegiance during the celebration of their 50-year reunion at Skyline High on Thursday, Sept. 19, 2019.

The school has been renovated and last names have changed over the years, but the memories of Skyline High School’s first graduating class remain.

Hundreds of former students and their spouses gathered in the school’s cafeteria on Thursday night for their 50-year reunion. The class of 1969 was the first senior class to graduate from the Skyline campus and came together this week to reconnect with former classmates and celebrate the history of the school.

Janet Hill has been leading the committee to organize the reunion for more than a year. Even though many graduates had not talked to each other in decades, she found it was easy to get people on-board with attending the reunion once she found their phone numbers and made the call.

“We are all bonded together because we shared this experience here. It makes you happy to be part of an in-group like that,” Hill said.

All the tables had centerpieces made from sections of the class yearbook and candid photos that had never been printed before. To make it easier for students to identify each other, name tags were handed out with old yearbook pictures and the maiden names of students who had gotten married since high school.

Skyline’s graduating class had scattered across the country over the years, but many were willing to return to Idaho Falls. One of the members of the planning committee, Beverly Windham, has lived in South Carolina for the last 48 years but was eager to help organize the reunion remotely.

“It’s been really fun. I’ve made new connections with people that I did not really talk to in school,” Windham said.

Penn Gildersleeve and his wife came up from Colorado for the reunion. As the senior class president, he had agreed to return to the school for the first time in decades to speak at the reunion dinner and emcee the night’s events.

“When I’m walking through the halls, I can tell the bones of the school are the same, but it’s changed a lot,” Gildersleeve said.

Even when classes began at the current location, not everything in the school had been finalized. The parking lot in front of the school was unpaved and the front doors had been painted orange. There was a cafeteria with vending machines but no hot food.

The school operated under a modular system for its first few years. Classes were held less frequently to allow for more unstructured studying and most of the rooms were separated by panel walls that could be slid aside to create 100-person classrooms. The panel walls didn’t reach all the way to the floor or the ceiling, leaving gaps that students threw things through.

The night’s events opened with a performance from Skyline’s student choir. In addition to the comments from students in the class, there were speeches from athletic director Gregg Baczuk about the school’s win in the first ‘Emotion Bowl’ football game against Idaho Falls and Superintendent George Boland, himself a graduate of Skyline High School in 1974.

“The most important thing we’ve kept is not the bricks and mortar but the people who have made this school happen and continued the traditions you started,” Boland said.

Along the back wall of the cafeteria was a table filled with examples of past and current student art. The pieces were gathered as part of a tribute to Alice Foster, the school’s long-time art teacher. Pieces from her and her students were sold in auction to the reuniting class for more than $3,000, with all proceeds donated to the Skyline art department.

The class reunion continued into Friday night when the graduates gathered in the Downtown Events Center for a less formal version of the reunion and additional fundraising for the art department.