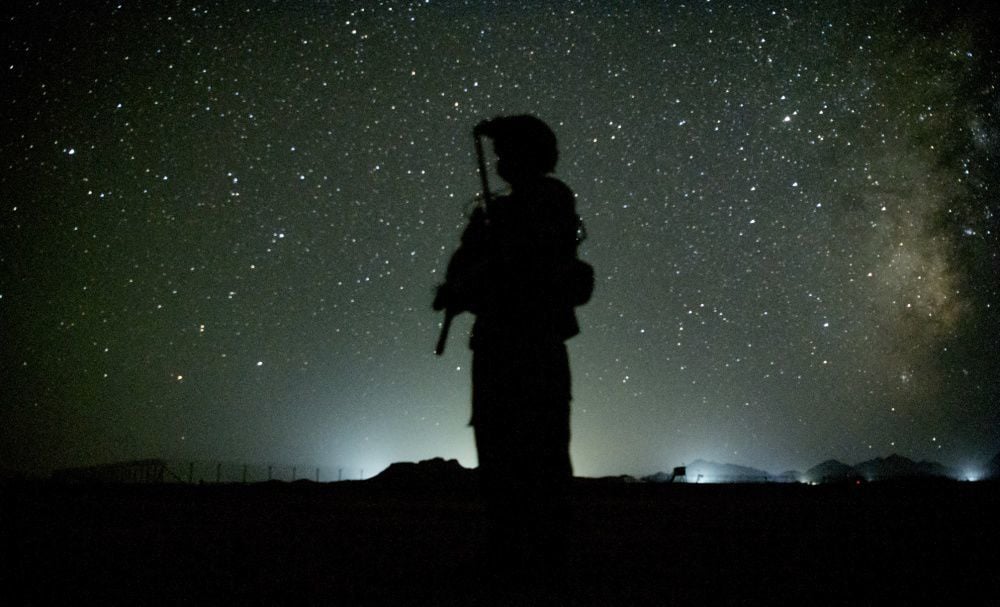 A Fly Away Security Team member guards a C-130J Super Hercules assigned to the 774th Expeditionary Airlift Squadron while cargo is downloaded and uploaded at an undisclosed location in Afghanistan on Aug 3. 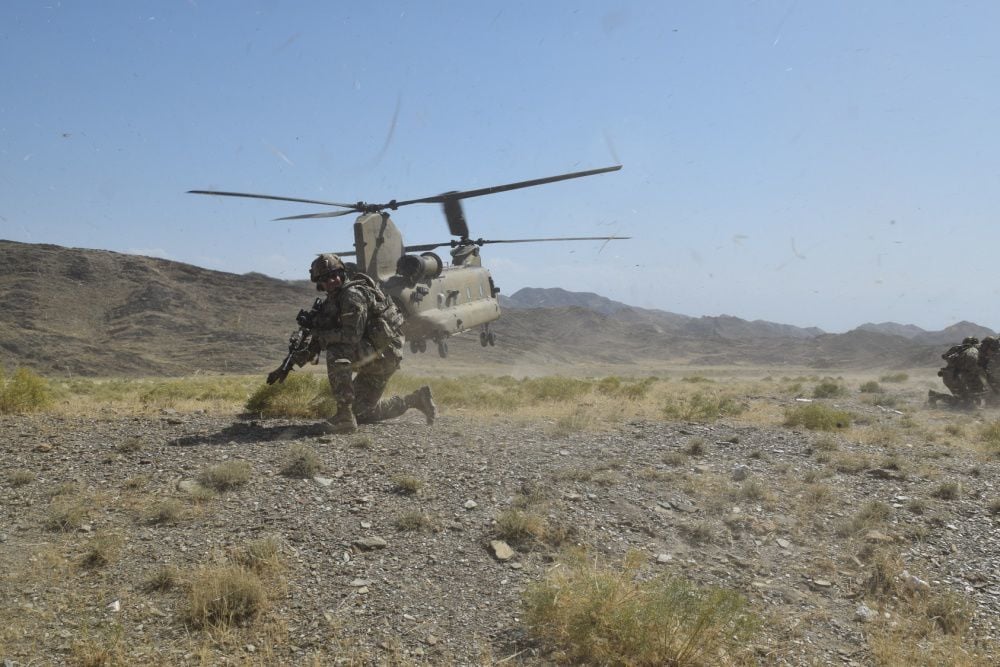 Advisers from the 2nd Security Force Assistance Brigade conducting advising during their 2019 deployment to Afghanistan. 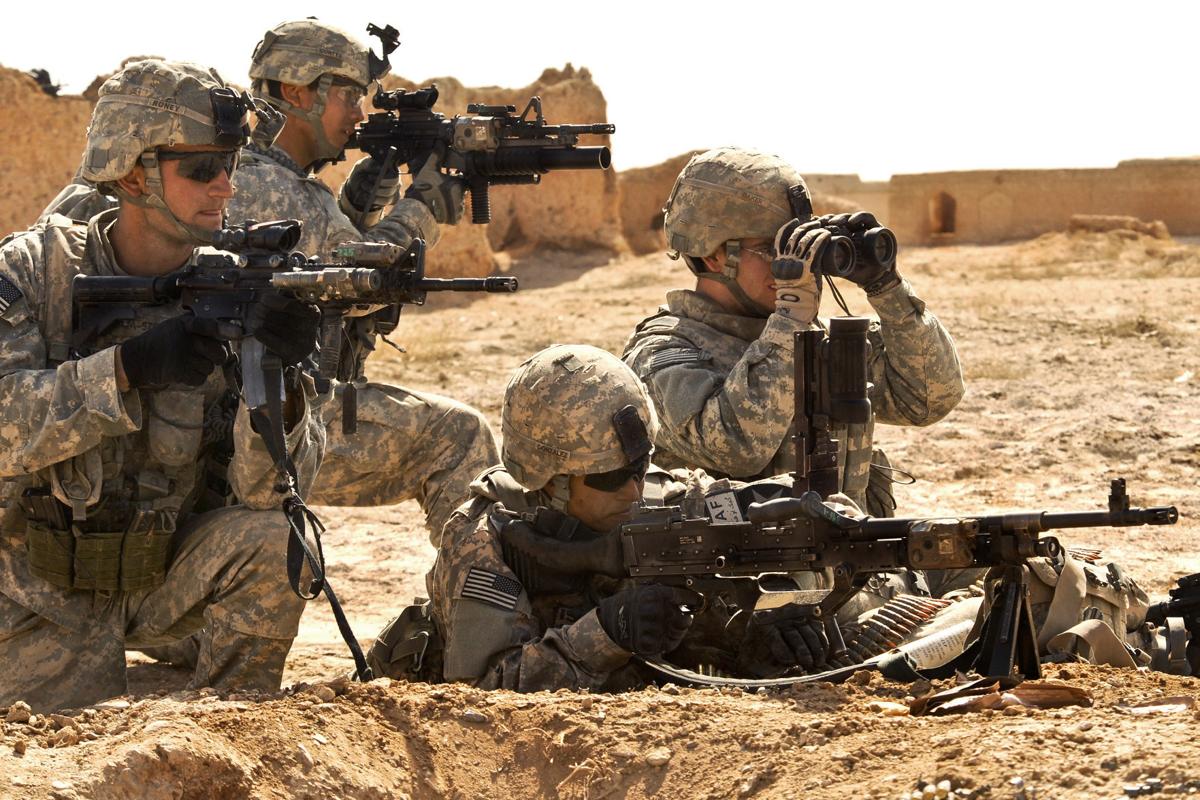 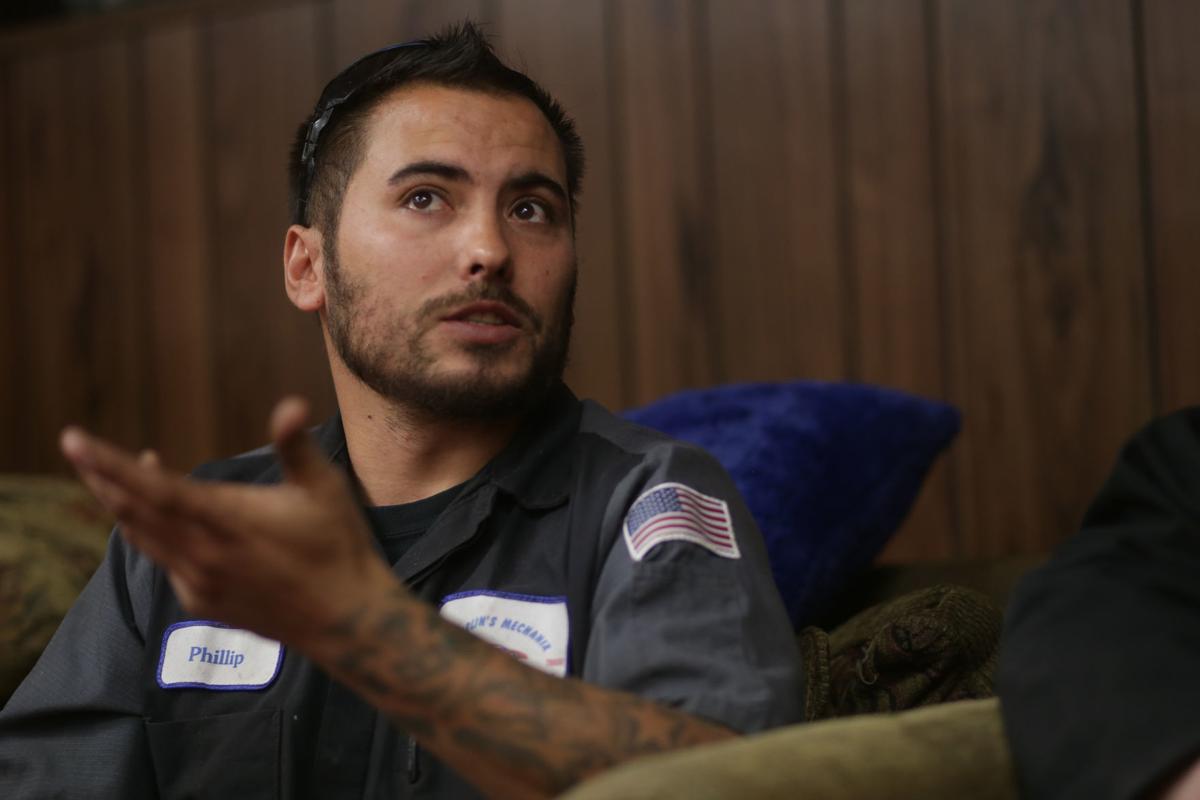 Phillip Smith speaks to a Post Register reporter about his experience serving in Afghanistan performing force protection with the Air Force during a Phoenix Quick Reaction Force meeting for veterans on Tuesday. 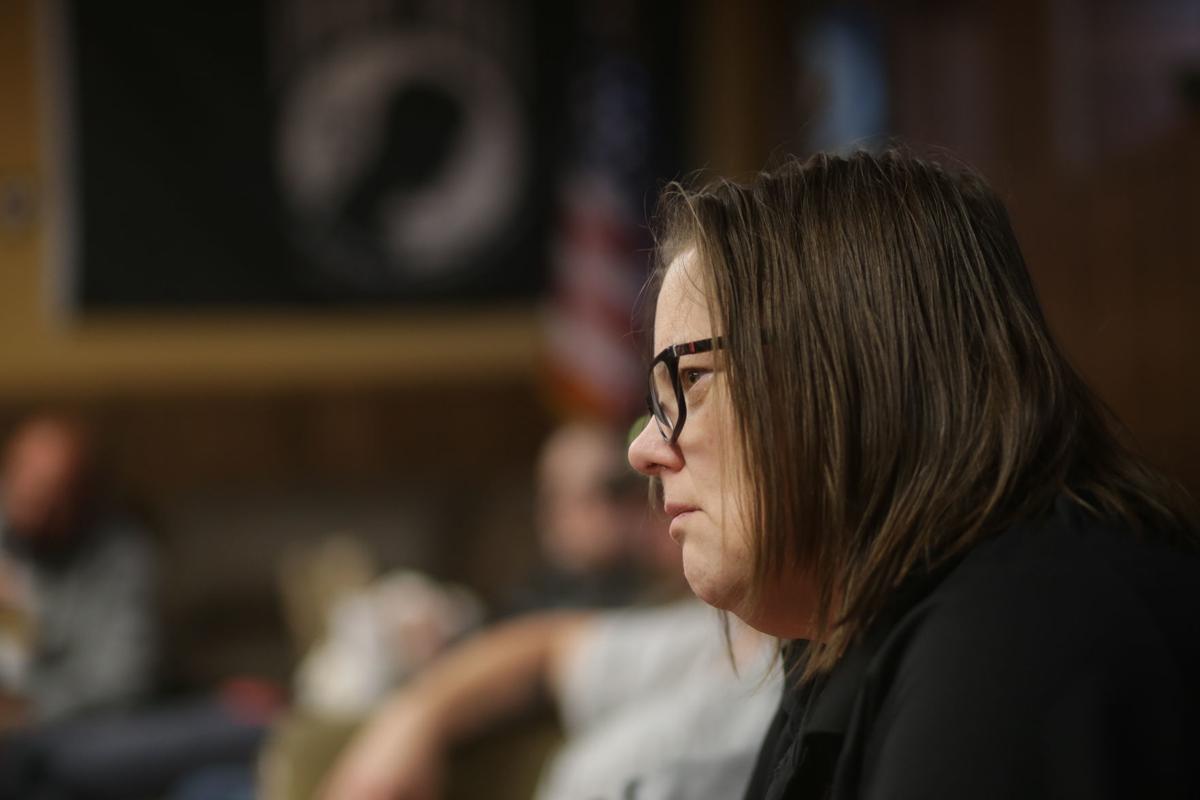 Elaine Garrison listens during a Phoenix Quick Reaction Force meeting for veterans on Tuesday, Oct. 1, 2019. Garrison served in Afghanistan, as well as other theaters, during her time with the Queen Alexandra's Royal Nursing Corp. "When things (like the Afghan war) go on too long people forget and care less," said Garrison. "I don't think terrorism will go away, but you have to stand up and try to help those being victimized." Monday marks the 18th anniversary of Operation Enduring Freedom. 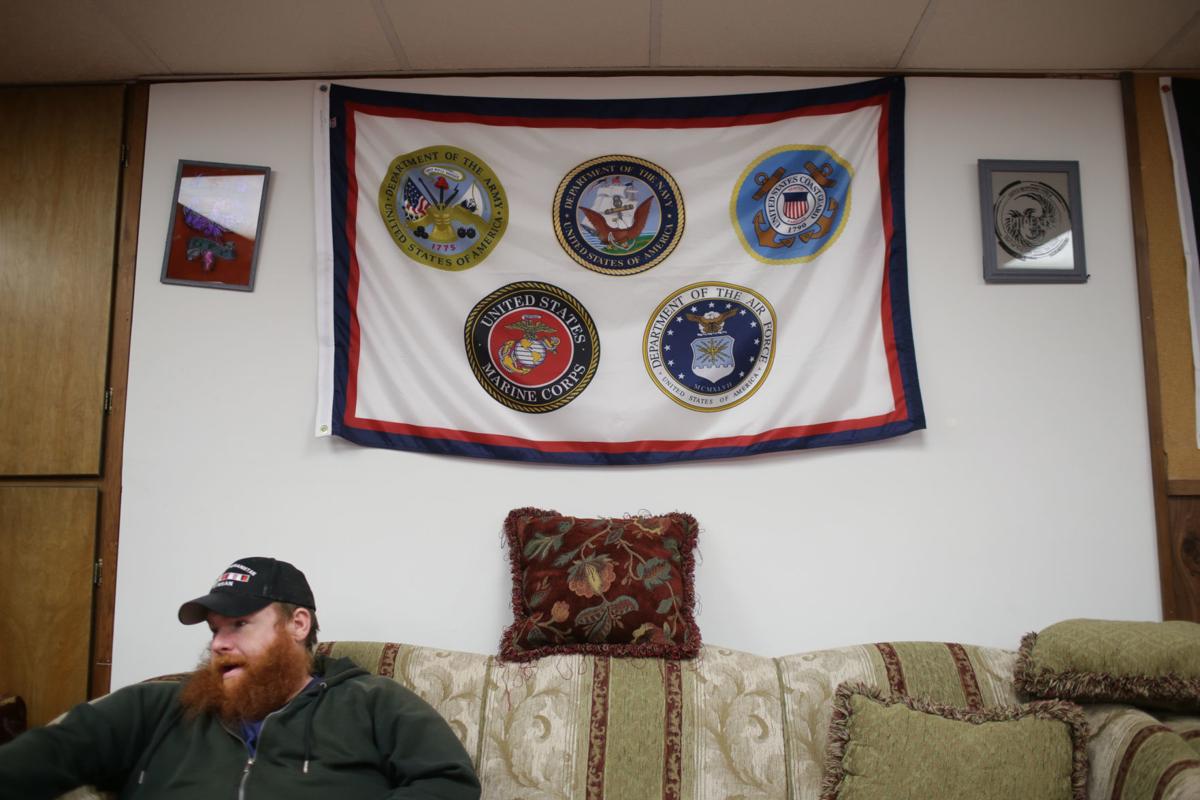 Casey Clark, an Iraq and Afghanistan veteran, speaks to a Post Register reporter about his time serving with the 101st Airborne during a Phoenix Quick Reaction Force meeting for veterans on Tuesday, Oct. 1, 2019. Clark served in Afghanistan from 2010-2011. Monday marks the 18th anniversary of Operation Enduring Freedom.

A Fly Away Security Team member guards a C-130J Super Hercules assigned to the 774th Expeditionary Airlift Squadron while cargo is downloaded and uploaded at an undisclosed location in Afghanistan on Aug 3.

Advisers from the 2nd Security Force Assistance Brigade conducting advising during their 2019 deployment to Afghanistan.

Monday marks the 18th anniversary of the U.S. military’s invasion of Afghanistan. The war’s early phase “Operation Enduring Freedom” kicked off what has been the longest war in United States history by nearly a decade.

The anniversary is significant not only for marking the beginning of the war on terror, but as a reminder that the United States Armed Forces now has enlistees who were born after the September 11, 2001, attacks.

The Post Register spoke to veterans of the Afghanistan War to learn their views of the war, its place in history and their experiences serving overseas. All of them said they felt the war had lost all purpose long ago. Many of them in separate interviews said the war that began with a clear mission to protect the country from another terrorist attack has been reduced to an aimless mission that costs lives and taxpayer dollars in a futile attempt to win the “hearts and minds” of people who no longer want them there.

The war’s 18th anniversary comes less than six weeks after former Ammon resident Dustin Ard was killed in the nation’s Zabul Province region. Ard would have turned 32 this month.

Phillip Smith, 30, was in junior high school on 9/11. News of the first plane hitting the World Trade Center broke while he was riding the bus to school.

When he got to school, the teachers didn’t bother with morning lessons. Instead, the class watched the news coverage and saw the second plane hit, then looked on as the towers collapsed.

“That’s the stuff you only see in movies,” Smith said. “It didn’t seem real.”

Smith enlisted in the United States Air Force in 2007. He was deployed to Bagram Air Base, the largest U.S. military base in Afghanistan, in 2012, where he acted as force protection for the base.

By then, the United States had killed Osama bin Laden, the leader of al-Qaida and the mastermind behind the 9/11 attacks. Killing bin Laden was one of the primary goals of the invasion, including destroying al-Qaida’s training camps and capturing or killing its leaders.

Smith was told the goal was to win the “hearts and minds” of the Afghani people and prepare the Afghan military to take over combat operations. In 2012, however, there was growing tension between the U.S. troops and their Afghan allies. The Taliban and other groups had been infiltrating the Afghan military and conducting insider attacks against Americans, NATO allies and Afghan troops.

The attacks created a wedge between the Americans and Afghanistan soldiers.

“I feel like we’re wasting resources trying to win their minds and hearts,” Smith said.

The goals of the U.S. presence in Afghanistan were not always so vague, and neither was the support following the al-Qaida attacks on the World Trade Center and the Pentagon, which killed 2,977 people. In a 2002 letter and a 2004 video, bin Laden said the attacks were motivated by American support for Israel and U.S. involvement with conflicts involving Muslims worldwide. The United States went to work tracking down the perpetrators of the deadliest terrorist attack in history.

The Taliban, a militant group that at the time effectively controlled Afghanistan, was not directly involved with the 9/11 attacks, but was closely allied with bin Laden and al-Qaida and provided them with shelter. When the Americans demanded bin Laden be turned over, the Taliban refused. The U.S. responded with the invasion of Afghanistan. A Gallup poll found 80 percent of Americans supported the invasion.

Over the next several years, almost all of al-Qaida’s leaders were captured or killed. Its training camps and organizational capabilities were dismantled. The Taliban was driven from power.

In 2011, U.S. Forces located and killed bin Laden in Pakistan. His successor, Ayman al-Zawahiri, remains at large, but does not have operational control of al-Qaida. Bruce Riedel, director of the Intelligence Project at the Brookings Institution and an expert on national security, recently called the group “a shell of their previous self.”

‘All the men who bled and died in that valley, it was a waste’

Dan McKnight, of Meridian, said bin Laden’s death should have ended of the war.

McKnight is lobbying Idaho politicians to bring an end to the war, writing columns on his website and in the Post Register asking Sen. Jim Risch, chairman of the Senate Foreign Relations Committee, to support a withdrawal.

McKnight was deployed to Afghanistan in 2006 as part of the Idaho National Guard in the Korengal Valley, located in the Kunar Province in eastern Afghanistan. The Korengal Outpost was established in 2006. The locals, however, were resentful of American presence and were even insular with Afghan soldiers.

In 2010 American forces abandoned the outpost.

“The near daily battles here were won, but almost always at the cost of wounded or dead,” The New York Times reported at the time. “There were never enough soldiers to crush the insurgency, and after four years, it became clear that there was not much worth winning in this sparsely populated valley.”

For McKnight, abandoning the outpost was a turning point in his belief in the war’s mission. Like most Americans he had supported the war, and like most veterans he was proud to serve his country. But 42 Americans had died in the Korengal Valley only for the military to conclude it had been a mistake to send them there in the first place.

“All the men who bled and died in that valley, it was a waste,” McKnight said.

James Kroenke, of Boise, served with McKnight in 2006 and again in 2012. While discussing the war, the word “waste” comes up frequently, whether it’s about military resources, taxpayer dollars, years or American lives.

Kroenke recalled seeing facilities that had been built when the Soviet Union occupied Afghanistan between 1979 and 1989. He asked an interpreter why the the locals had not made use of the facility and was told it was because the buildings were not made by Afghans.

For Kroenke, it drove home how little the people wanted American help rebuilding.

“I can’t say when the war should have ended, but I know we’re not doing any good,” Kroenke said.

Though every Afghanistan War veteran the Post Register talked with said they thought the war should end, most remained proud of their service. Smith said he often encourages young people to enlist.

Idaho Falls is home to several veteran support groups, including the Phoenix Quick Response Force. In a meeting Tuesday, attended by about 30 people, veterans discussed community events held to honor and acknowledge their service. Attendees such as Smith can find contacts who understand their experience and can provide support.

Casey Clark, of Idaho Falls, comes from a family with a history of military service. His brother was serving in the Air Force at the start of the War on Terror and his father was a veteran of the Vietnam War.

Clark enlisted in the Army in 2005 right out of high school. His first two tours of duty were in Iraq, and he served in Afghanistan in 2010.

“I’m proud of what I did,” Clark said. “I will not take anything back.”

He added, however, that it seems most Americans hardly realize American troops are still in the country.

“That’s why it’s been going on too long,” Garrison said.

Garrison served near Kabul arranging medical evacuations for wounded troops in 2003. She said she often blocks out the memories to avoid nightmares.

The United States ended combat operations in 2014, turning the fighting over to the Afghan military. Casualties declined, but the U.S. still has about 14,000 troops in the country. That’s up from the 8,400 U.S. troops that were in the country when President Donald Trump took office, according to the Military Times.

The United States had been negotiating peace terms with the Taliban, who continue to fight Afghan and American forces, but Trump called off the discussion last month after a bombing in Kabul killed 12 people, including a U.S. soldier.

Eighteen years in, there’s no end to the war in sight.

McKnight recalled attending an event to honor Ard. There he met a young man who had enlisted and McKnight asked if he remembered the beginning of the war.

The young man told him he was only a few years old when the planes hit the twin towers. He could not remember a time when the United States was not at war.

“This generation, they don’t know anything but war,” McKnight said. “They don’t have a concept of peace.”

The Phoenix Quick Response Team is one of several groups available for veterans in Idaho Falls. The group organizes local veterans to provide services and support for local veterans and to coordinate with the community for events and education about the military.

The mission statement on Phoenix QRF's website reads: "We are a multifaceted organization striving to provide a variety of services, by Veterans for Veterans, finding purpose and direction through the strength and camaraderie forged in the defense of our nation."

"We just want the veterans to know we're there," Versteeg said.

MERIDIAN — When Dan McKnight decided to host a Veterans Appreciation Night during a Rocky Mountain High School football game, he had a particu…