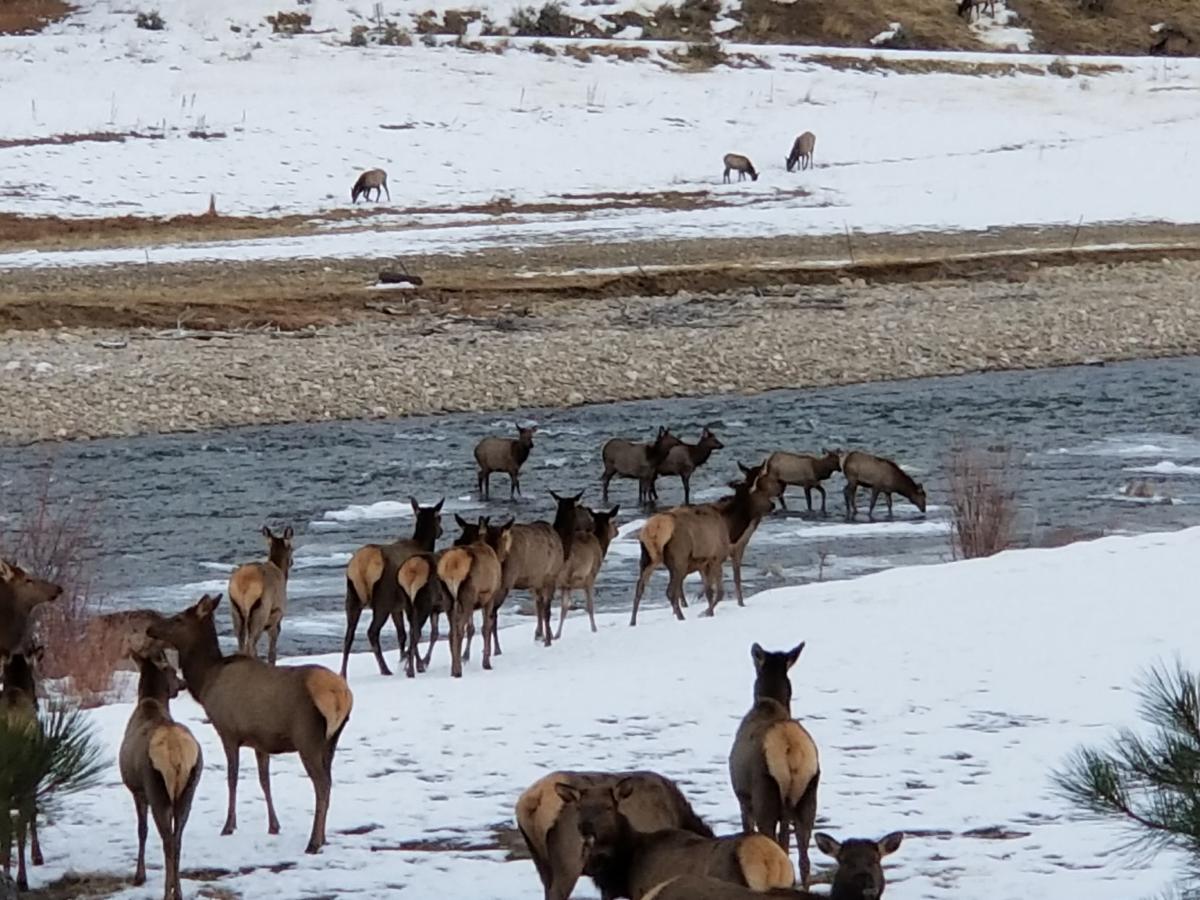 A herd of elk move across a river during winter. Tracking wild ungulates who migration sometimes more than 200 miles during the course of a year aids in their conservation. 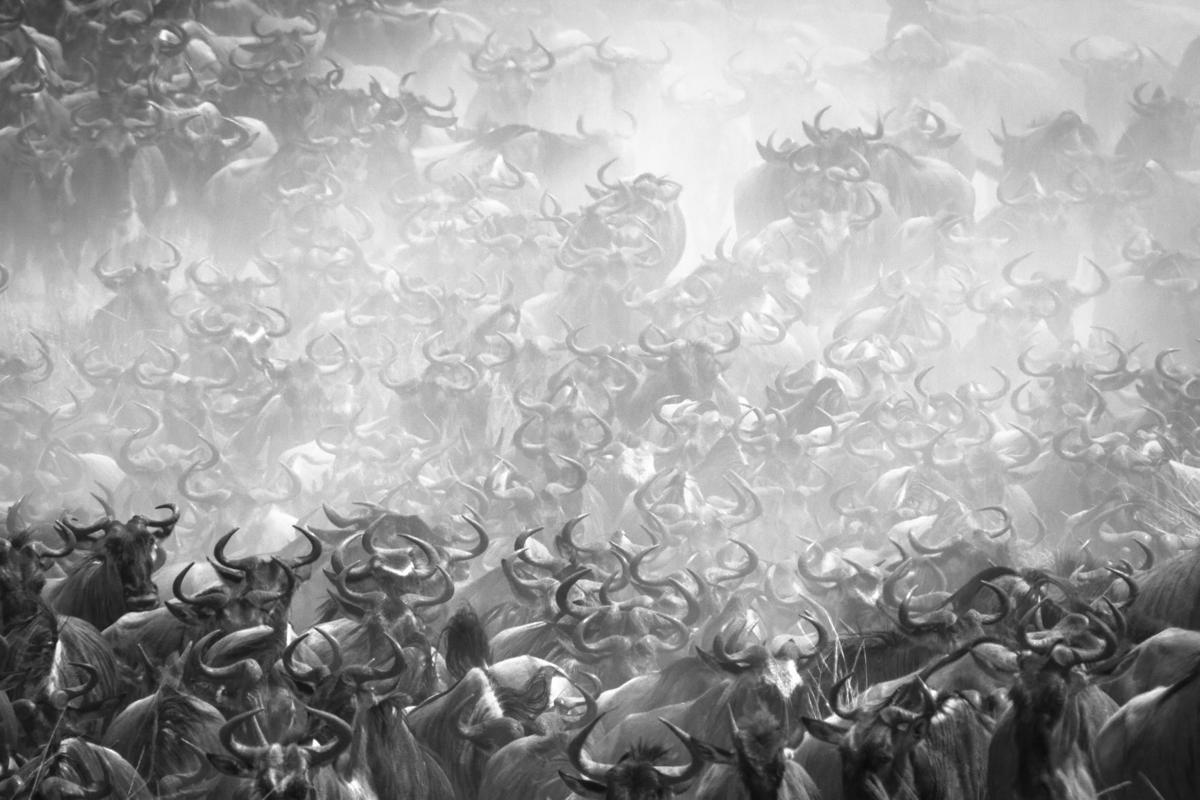 A vast wildebeest herd is on the move in Masai Mara, Kenya. Scientists from around the world have joined a new global project to map migrations to aid in their conservation.

A herd of elk move across a river during winter. Tracking wild ungulates who migration sometimes more than 200 miles during the course of a year aids in their conservation.

A vast wildebeest herd is on the move in Masai Mara, Kenya. Scientists from around the world have joined a new global project to map migrations to aid in their conservation.

It’s an idea that grew up in small-town Wyoming and now is going global.

The idea is to create a global atlas of hooved mammal migrations. Scientists are calling it The Global Initiative on Ungulate Migration.

Wyoming, like many Western states including Idaho, has abundant ungulate migrations. Scientists have been tracking and mapping migration patterns for years in the Cowboy and Gem states and creating detailed maps of the animals’ highways. With a sharing of ideas and methods with colleagues around the world, a new project arose to create a worldwide atlas that would help governments, communities, planners and conservationists work around these migration corridors and sustain them in the face of an ever-expanding humanity.

Announced in a recent issue of the journal Science, lead author Matthew Kauffman, a scientist working for the U.S. Geological Survey at the University of Wyoming, said the project is expected to begin posting maps online by the end of the year. A panel of 10 international scientists are overseeing the project.

“The Science commentary is basically a call for scientists to work together to pool our resources and brain power and share methods to map all these migrations in a concerted way,” Kauffman said in a phone interview. “It will create a global atlas that will house all those map files and make them publicly available to any types of policymakers or decision-makers that need to use those maps to guide development and (eliminate) threats or barriers.”

The global project grew out of a successful project in the Western states gathering detailed migration corridors into a central document. That document, called “Ungulate Migrations of the Western United States: Volume 1,” can be found online at pubs.er.usgs.gov/publication/sir20205101.

Mark Hurley, wildlife research manager for Idaho Fish and Game, was Idaho’s lead on the Western-wide mapping project. He expects the information to benefit animals and people over time. Especially where migration routes cross specific highways. He cited one such dangerous crossing at Rocky Point south of Montpelier on U.S. Highway 30. The Idaho Transportation Department reports about 100 mule deer killed along this stretch each year as thousands cross the road during migration.

“The data has helped us understand where the migration is and where the problems are,” Hurley said. “Mule deer have a high fidelity to migration routes to their summer range. They’ll use the same migration route and same patch of aspen trees for summer and raising their fawns and they’ll do that year after year. … If anything, we’re just providing some information and hopefully the decision-makers can use it.”

Kauffman said as the information is gathered and properly analyzed, it will prove invaluable to preserving herd migrations and helping human development coexist with critters.

“It’s emerging as a very efficient and powerful way to manage and conserve these corridors,” Kauffman said. “Once you have that map, then you can look at where the roads cross, whether there are problematic fences, and where there are big lands at risk for subdivisions, where there are oil and gas leasing. You can do this overlay and identify the threats and at the same time that also allows you to identify conservation solutions.”

Kauffman said some GPS data exists across the world and in many cases data still must be gathered to create detailed and accurate maps.

“We started engaging with some of our colleagues around the world who were studying Arctic caribou and the Serengeti wildebeest and Mongolian gazelle, African elephants and zebra and all these other species that migrate,” he said. “What we saw was that all of these migrations are threatened by the same types of things. They’re all threatened mostly by barriers, fences, road development and things we do on the landscape that make migrations more difficult. We realize that for the most part none of these iconic migrations had been mapped in sufficient detail to guide their conservation.”

Biologists have learned that ungulates’ ability to move between seasonal ranges is critical for many species.

“Those animals can’t make a very good living if they stay in one place year-round,” Kauffman said. “In the case of the Serengeti wildebeest, they are essentially following the rain and the nutritious green grass that comes from those rains. Across the world you see in these ungulate populations, those that are migratory tend to be the most abundant. The reason you have 1.3 million wildebeest in the Serengeti is because those animals are able to make a great living by doing that multi 100-kilometer migration.”

Kauffman said the biomass from the herds provides the prey base for the world’s largest carnivores and are key to the food webs.

Detailed mapping of migration corridors has already paid dividends. Kauffman said as migration maps were overlaid on top of planned oil and gas leases in southern Wyoming, officials decided to defer 22,000 acres of leases, when “they could look at those leases and say these leases here, here and here are too risky to the continued migration of these deer through this mapped corridor.”

He said some migrations have already been lost, probably forever. He pointed to the building of Interstate 80 through southern Wyoming disrupting mule deer, as one example.

To follow the progress of the global mapping project, go online to “Convention on the Conservation of Migratory Species of Wild Animals” at cms.int/gium.

The Western states migration map progress can be followed online at westernmigrations.net.

Popular 'Deer 139' film to be shown live online by university