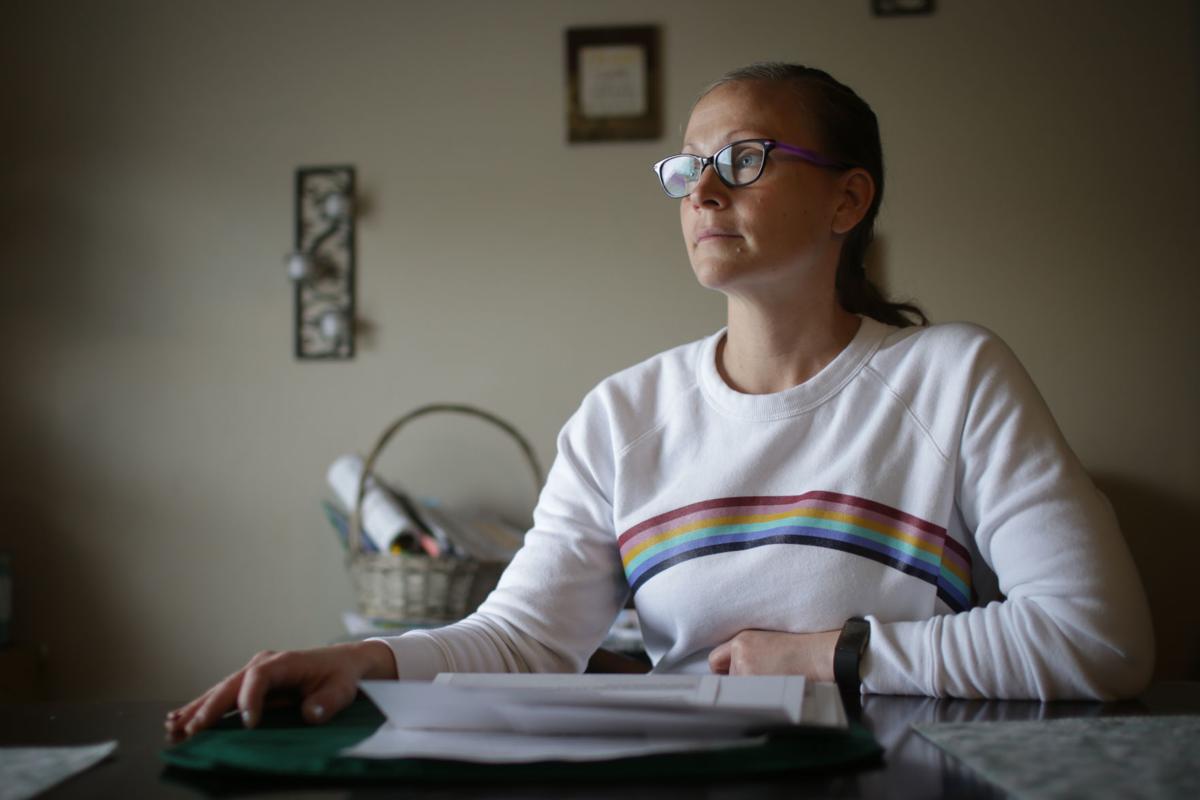 Brandy Yorgensen poses for a photo at her home on Friday, June 7, 2019. Yorgensen was sued by Medical Recovery Services in 2017 over a $439 medical debt. She paid the hospital bill immediately but refused to pay the attorney fees for MRS. After a two-year court case and thousands more in legal fees on both sides, Magistrate Judge Jason Walker ruled in her favor in May. 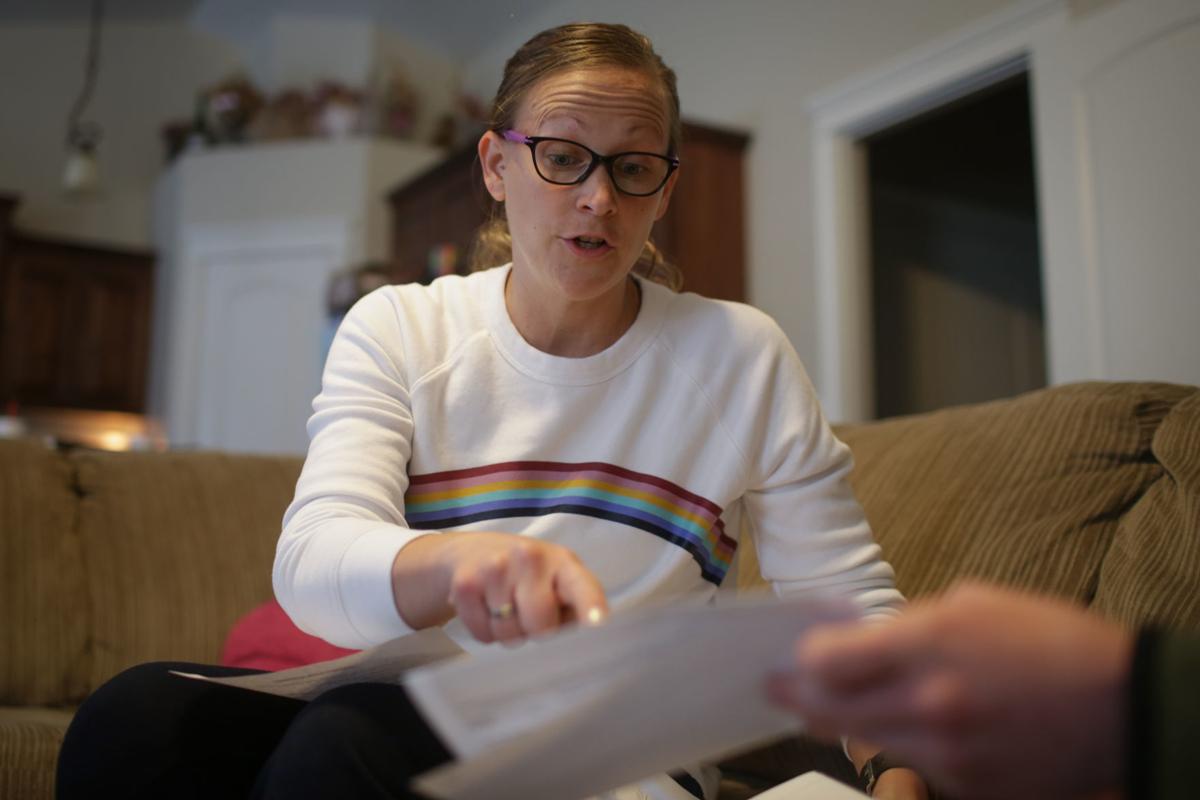 Brandy Yorgensen speaks with a Post Register reporter at her home on Friday, June 7, 2019. Yorgensen was sued by Medical Recovery Services in 2017 over a $439 medical debt. She paid the hospital bill immediately but refused to pay the attorney fees for MRS. After a two-year court case and thousands more in legal fees on both sides, Magistrate Judge Jason Walker ruled in her favor in May.

Brandy Yorgensen went to the hospital in November 2016 to treat an infection. More than two years later, her last medical bill from that hospital stay was resolved in a hearing at the Bonneville County Courthouse.

On one side of the courtroom on May 21 was Bryan Zollinger, the lead attorney for Medical Recovery Services. On the other side was David Johnson, the attorney representing Yorgensen. Medical Recovery Services had filed its final motion of reconsideration in Bonneville County Magistrate Court after being ordered to pay Yorgensen’s attorney fees, and Magistrate Judge Jason Walker was about to make his final ruling on the case.

“The amount of attorney’s fees spent on both sides is unreasonable compared to the amount of money being discussed,” Walker said as he issued his statement.

Like thousands of Idahoans, Yorgensen was the subject of a debt collection lawsuit from Medical Recovery Services to settle an outstanding debt. Most of those cases are settled quietly, often with wages being garnished and unpaid medical bills eventually being paid.

Yorgensen is one of the few to have successfully challenged Medical Recovery Services’ debt collection efforts in court. The case eventually cost both thousands of dollars in legal fees to settle what started as a $439 bill sent to the wrong address.

“It’s not just that I’m fighting my own case. There are a lot of people that have been taken advantage of in situations like this and don’t have these resources,” Yorgensen said.

The case began when Yorgensen was admitted to Eastern Idaho Regional Medical Center for an E. Coli infection. She and her insurance paid the bill they received from the hospital and Yorgensen moved on with her life.

“I assumed that the bill from the hospital was for all of their services. Apparently not,” she said.

What she didn’t know is that one of the doctors who treated her was a specialist who billed through Teton Hospitalist Services. Yorgensen’s health insurance paid its share of the bill, leaving her owing $439 from the two-day stay. Teton Hospitalist Services had the wrong mailing address for her, missing the “North” from her street name, and she claimed that she never received a bill in the mail.

Those debts were turned over to Medical Recovery Services in spring 2017, and Yorgensen was served with a debt collection lawsuit in October. She said she was shocked by the existence of the debt and by the additional fees that had been added by the lawsuit. Her $439 medical debt had more than $600 in other fees and court costs attached to it, including a $410 attorney fee.

Yorgensen called Teton Hospitalist the next day and paid the remaining medical debt directly to them. Once again, she thought this would be the end of the situation, as she no longer had a medical debt to collect on.

Medical Recovery Services felt differently. The company refused to cancel the account, saying the debt had been with the agency for more than a month and the company was still owed attorney fees for serving Yorgensen. Zollinger argued that Teton Hospitalist Services had waived its rights to collect when it turned the account over to a collection agency and that Yorgensen would not have paid at all if she hadn’t been served.

“We accept there is a $0 balance,” Zollinger said during the May court hearing. “We’re arguing that we should be the prevailing party at this time.”

Most cases of medical debt are settled in court hearings that the patient does not attend, resulting in garnished wages or more aggressive tactics. In its 2018 report, “A Pound of Flesh: The Criminalization of Private Debt,” the American Civil Liberties Union singled out Medical Recovery Services for its collection tactics.

“In Idaho, Medical Recovery Services, LLC, a collection company that specializes in collecting medical debts, is responsible for securing the arrests of more debtors statewide than any other collector, having obtained 345 arrest warrants from 2010 to 2016 that resulted in the jailing of 222 debtors, based on the ACLU’s review of court records,” the report said.

There is no law in Idaho that notices of medical debt must be received by the debtor before a private company can collect or file suit to collect.

Yorgensen had the money to pay the extra $600 to Medical Recovery Services. Instead, she hired attorney David Johnson to draft a response denying that she owed anything else and kicked off an 18-month case.

“It’s the principle of it. I didn’t receive the bill, and I don’t think that I should have to pay for some debt that wasn’t my fault,” Yorgensen said.

Brandy Yorgensen speaks with a Post Register reporter at her home on Friday, June 7, 2019. Yorgensen was sued by Medical Recovery Services in …

Her sister, Ashley Hurd, said that Yorgensen wouldn’t intentionally leave an unpaid debt. Hurd had worked for a law office in town and previously handled medical debt cases in Iowa. She said she knew from experience that Zollinger and Medical Recovery Services would not drop their case anytime soon.

“He is very methodical and can’t stand to be wrong. He doesn’t like being on the losing side of a case,” Hurd said.

Judge Walker took over the case soon after Yorgensen filed her answer. He ruled in June 2018 that she no longer had a medical debt, then ruled in December that Medical Recovery Services would pay for her attorney fees in the case.

At the time of the ruling in December, Johnson’s attorney fees had reached more than $9,500. By May, the fees to fight the reconsideration motion had increased the total to $12,151.

Zollinger said that over the past decade of representing Medical Recovery Services, he has only lost around five cases in court. He said the majority of cases involved patients who say they never received a bill in the mail for additional services.

Defending the actions taken in the case, he said Yorgensen should have expected a second bill because she signed a waiver for Teton Hospitalist Services when she was admitted.

Zollinger’s also suspicious of the claim that the address listing kept the bill from being delivered to Yorgensen. He said both EIRMC and Yorgensen’s insurance company also had her address listed without the “North” and had been able to contact her. The bill also could have been missed on her end because the Fair Debt Collection Practices Act prevents debt collectors from labeling the outside of their mail as an attempt to collect.

“If this case were to go further, I think the courts would have to look harder at this,” Zollinger said.

If the case were to go further in the court system, the next step would be appealing to the Seventh Judicial District Court. Zollinger has so far offered to pay $7,500 of the awarded attorney fees, saying he felt there was overbilling on Johnson’s part, and that Medical Recovery Services had no plan to appeal at the moment.

If the company did choose to keep pursuing the case, Yorgensen is ready to continue the fight as far up as it takes.

“I’m not giving up on this anytime soon,” she said.

So far a law firm hired by the CEO of Melaleuca has agreed to take on 102 people’s debt cases, most of them people who are being sued by Medic…