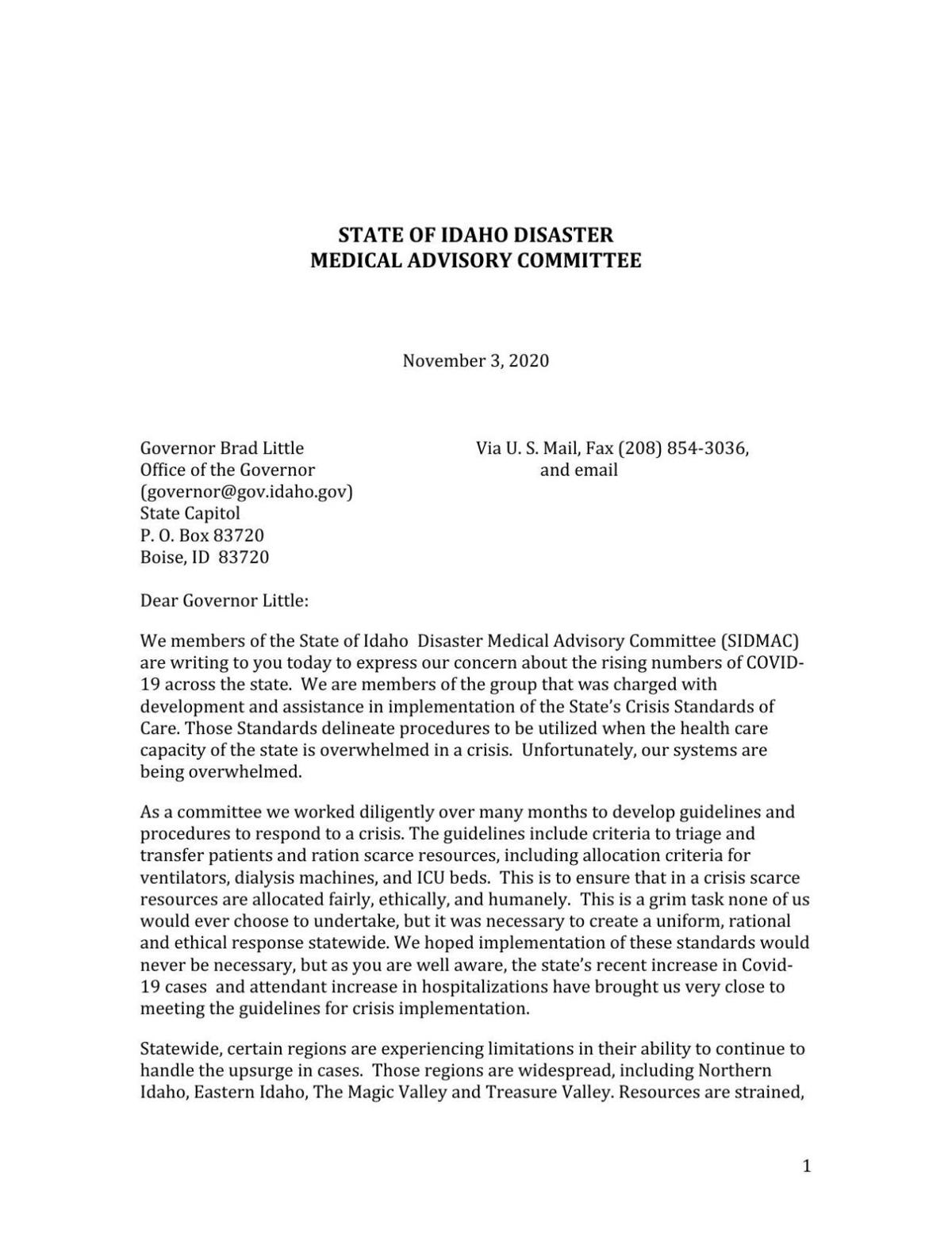 The health care administrators, who serve on a more than 30-member State Disaster Medical Advisory Committee that devised Idaho’s emergency hospital plan, wrote that hospitals are being pushed near the brink of thresholds to move to crisis standards of care. The crisis plan that the committee developed lists several considerations for how to prioritize care, including the severity of a patient’s injury and their likelihood of survival.

“The state’s recent increase in Covid-19 cases and attendant increase in hospitalizations have brought us very close to meting the guidelines for crisis implementation,” reads the letter, signed by the doctors from eastern Idaho, Treasure Valley, Magic Valley and North Idaho — all regions which “are experiencing limitations in their ability to continue to handle the upsurge in cases.”

Little has refused repeated calls from doctors and public officials to issue a statewide mask mandate. When he moved the state back into Stage 3 of his four-stage re-opening plan last week, he said he believed people would adhere more to mandates issued by local governments.

Eastern Idaho Public Health officials have been issuing mask mandates for months in its eight-county region, but officials say public compliance is not widespread.

Little’s spokeswoman, Marissa Morrison, replied to the Post Register on Wednesday, saying Little encourages Idahoans to wear masks and that he supports local leaders to issue mask mandates, which some officials have done since Little pushed for a local pandemic responses.

“Governor Little believes it is critical that we each choose to wear a mask to protect our neighbors and loved ones, and to keep our economy and schools open.

“Idahoans value local control and the local approach to addressing important issues. Idaho law gives the authority to our mayors, health district boards and counties to set rules for public health. The Governor will continue to support those local leaders who make tough decisions to protect our most at-risk citizens.

“Governor Little continues to have robust discussions with community leaders and the medical community to convey to Idahoans the effectiveness of wearing masks to stop the spread and win our battle against COVID-19.”

“We strongly implore you, we beg you, to take the courageous step of immediately instituting a statewide, enforceable masking mandate,” they wrote in the letter. “Without that action we fear the nightmare scenario we have had to design in our crisis plan will come to fruition.”

The state committee advises the governor on disaster planning. Little would have to make a declaration to move the state into crisis standards of care.

The letter says staff shortages are driving the capacity constraints: “Unlike expansion of beds and equipment, the number of trained personnel to care for the increased number of patients cannot be easily expanded.”

This article has been updated to include a response from the governor’s office.