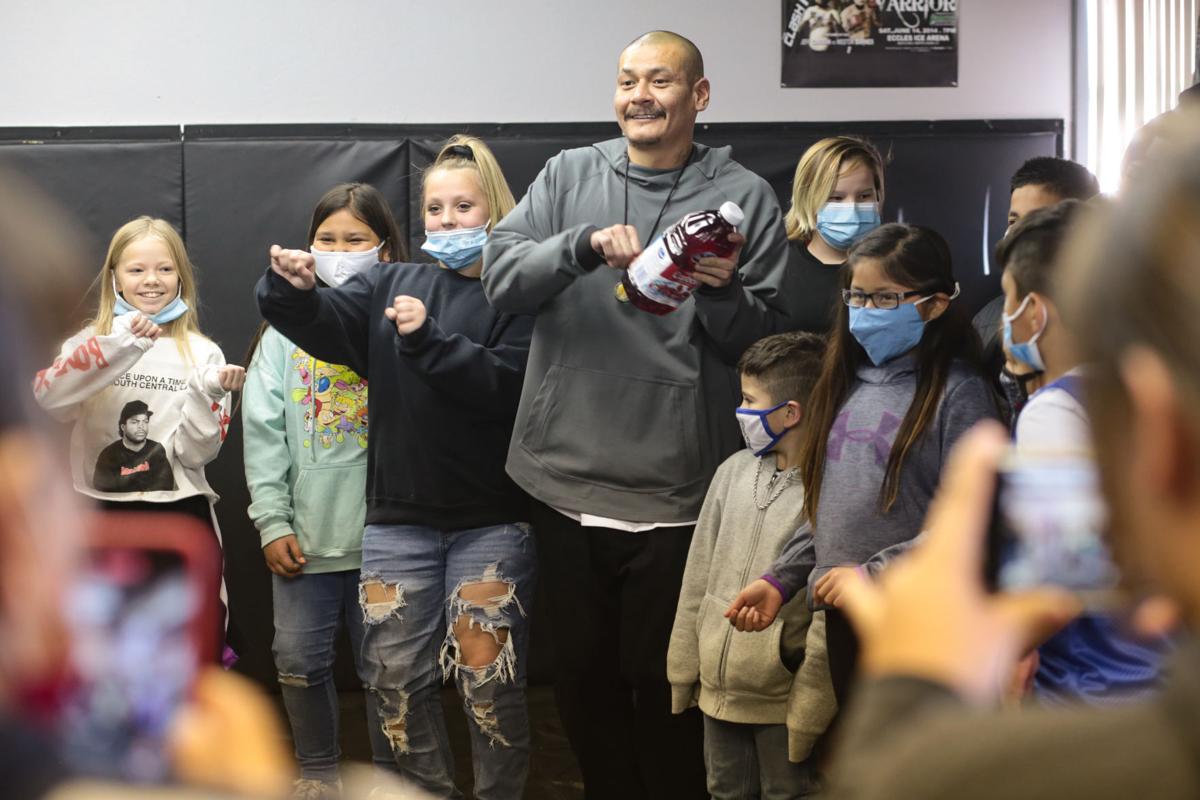 Nathan Apodaca performs in a TikTok video with kids during a meet-and-greet at Lionheart Mixed Martial Arts Studio on Saturday, Nov. 14, 2020. 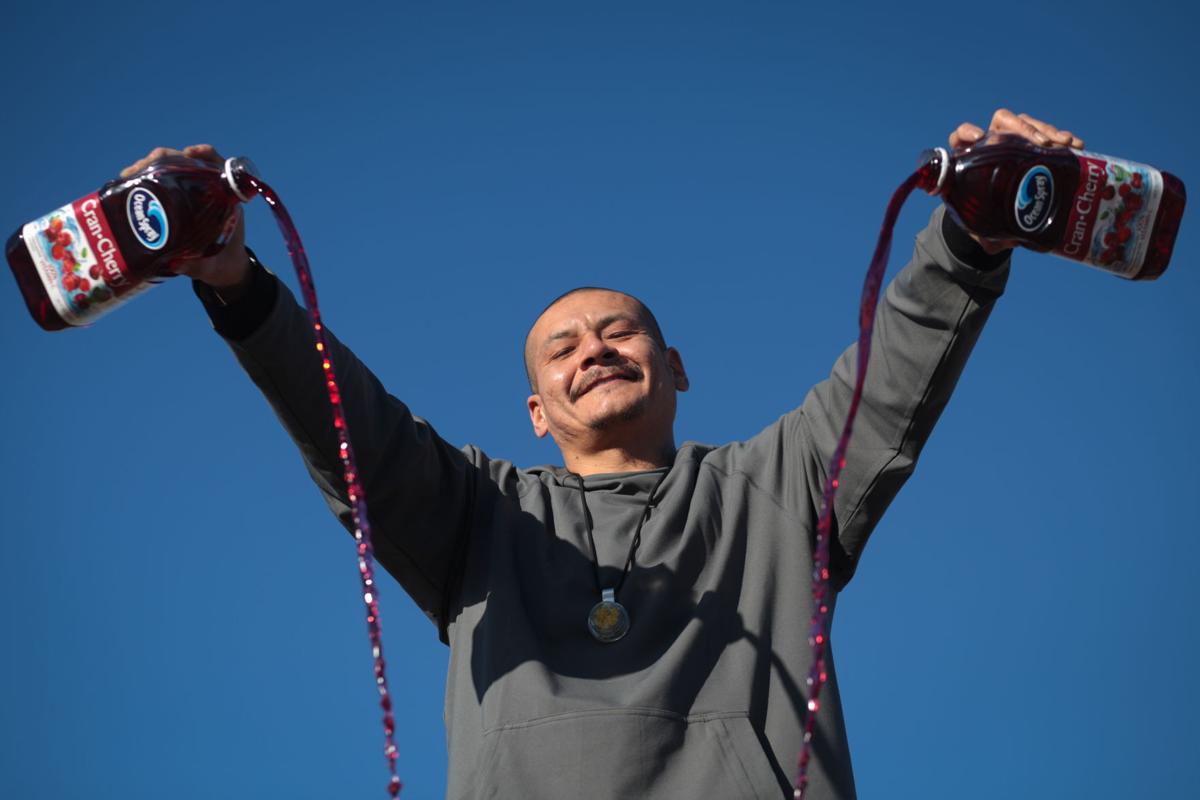 Nathan Apodaca poses for a photo during a meet-and-greet at Lionheart Mixed Martial Arts Studio on Saturday, Nov. 14, 2020. 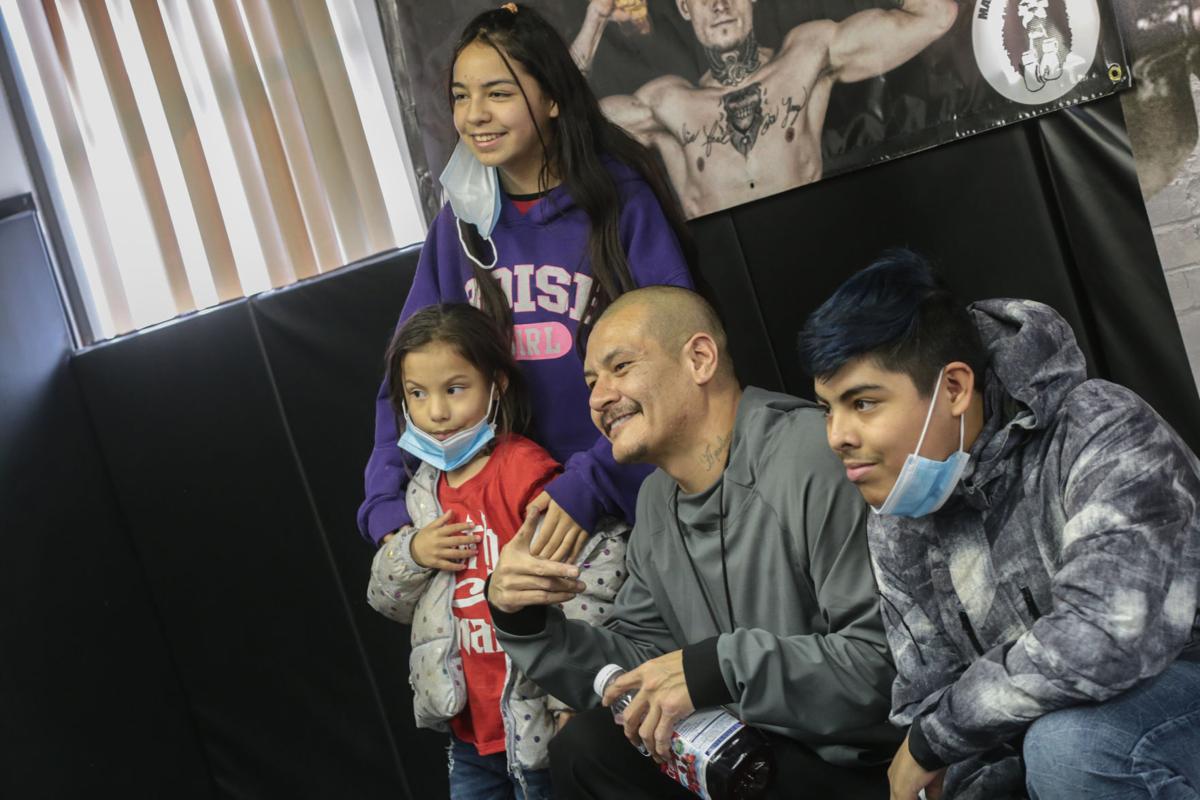 Nathan Apodaca poses for a photo with fans during a meet-and-greet at Lionheart Mixed Martial Arts Studio on Saturday, Nov. 14, 2020.

Nathan Apodaca performs in a TikTok video with kids during a meet-and-greet at Lionheart Mixed Martial Arts Studio on Saturday, Nov. 14, 2020.

Nathan Apodaca poses for a photo during a meet-and-greet at Lionheart Mixed Martial Arts Studio on Saturday, Nov. 14, 2020.

Nathan Apodaca poses for a photo with fans during a meet-and-greet at Lionheart Mixed Martial Arts Studio on Saturday, Nov. 14, 2020.

The gym owner is Weston Barnes, a childhood friend of Apodaca’s. Barnes opened the business in September, a difficult feat during a pandemic. After struggling to keep the doors open, he asked Apodaca if he would be willing to do a two-hour meet-and-greet.

“I’m surprised people came here, because (Idaho Falls) is so small. You can get a picture with me anywhere (in Idaho Falls). But it’s for a good cause. If I was anywhere else, I’d have a line out the door,” Apodaca said.

The Idaho Falls native became famous after a Sept. 25 video of him sipping cranberry juice and lip-syncing to Fleetwood Mac’s “Dreams” went viral.

It wasn’t just the video that caught people’s attention. It was the story behind it that truly charmed the world. Before his rise to fame, Apodaca was living in an RV trailer with no running water. The reason he was skateboarding that day was because his car had broken down on his way to work at the Circle Valley Produce potato factory.

The video has since been watched more than 100 million times across all platforms and skyrocketed the 1977 song “Dreams” to No. 1 on iTunes. Tribute videos have been viewed more than half a billion times, according to NPR.

As a result of this recent fame, dozens of children, teens and adults all waited in line for their chance with a photo of the local TikTok star on Saturday. It was $20 for a group of four to enter. All proceeds went to Lionheart Mixed Martial Arts.

“This morning I woke up and was like, ‘I have to go see him. It’s Doggface,’” said Derek Riley, a 20-year-old Brigham Young University-Idaho student who drove to the event from Rexburg.

During a recent trip to California, Apodaca was stopped on the street taking selfies with fans for hours. But that was Los Angeles, this is Idaho Falls. It took a visit to the Grand Teton Mall to make him realize that he was just as famous here.

“Before all this, before the viral video, I’d go in the mall, have time to walk around or whatever. After the viral video, I didn’t even go three or four steps before people are taking pictures of me. So I was like, ‘OK maybe this is bigger than I thought.’ Two steps in and someone recognizes me. It’s just insane,” Apodaca said.

Even his friends and family have been treating him differently since Apodaca filmed a commercial with rapper Snoop Dogg.

“They think I’m a millionaire now. They look up on Google how much you get paid for commercials and stuff. But it’s nowhere near what it is on Google. It’s just funny because they’re like, ‘You got this much or this much.’ And I’m like, ‘You guys are tripping,’” Apodaca said.

Yet there can be no denying that Apodaca’s star is continuing to rise. While in Los Angeles and Las Vegas, he was invited to spend time with celebrities like G-Eazy, Burner and Jessie Reyes. He found them all to be nice, normal people.

“Everybody puts someone on a pedestal. But they’re all just normal, human people. G-Eazy, Berner, all of them. All of them were just like hanging out with a normal friend,” Apodaca said.

He will soon be the first person who is not a professional skateboarder to be signed with the skateboard company Sector 9. Zumiez too is looking to put Doggface merchandise in its stores. A Doggface phone app game might soon be on the way.

It’s important to Apodaca to find something local to invest his money in as well.

After returning from his trip, where he was put up in expensive hotels and treated as a guest of honor at exclusive restaurants, Apodaca returned to his RV trailer parked in his brother’s front yard.

But not for much longer: he has finally been approved for a house. To Apodaca, it’s the most exciting thing to come out of all of this. He’ll have running water and bedrooms for his children. It is a $320,000 Idaho Falls home with five bedrooms, according to TMZ.

“The biggest thing is just the house. That’s the most surreal thing for me. I’m just happy about that,” Apodaca said.