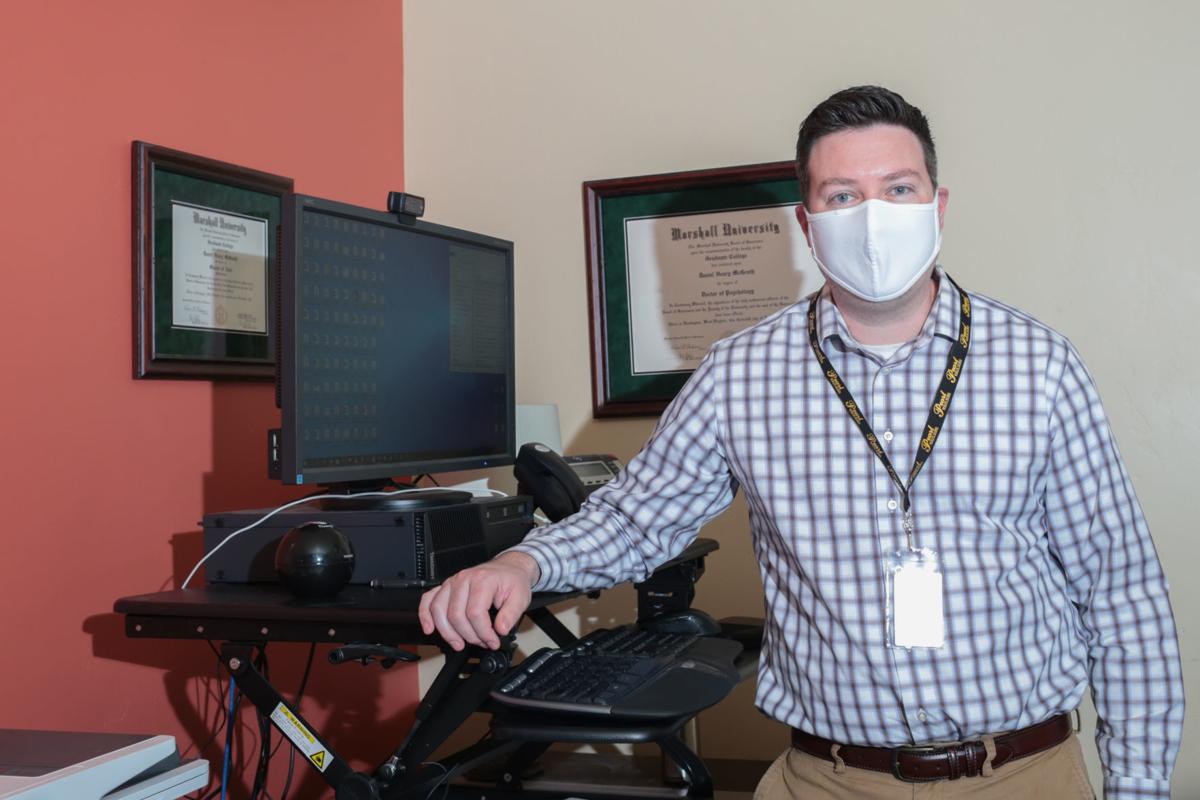 Psychologist Daniel McGrath poses for a photo at one of the computers he uses for telehealth at Pearl Health Clinic on Wednesday, May 6, 2020. 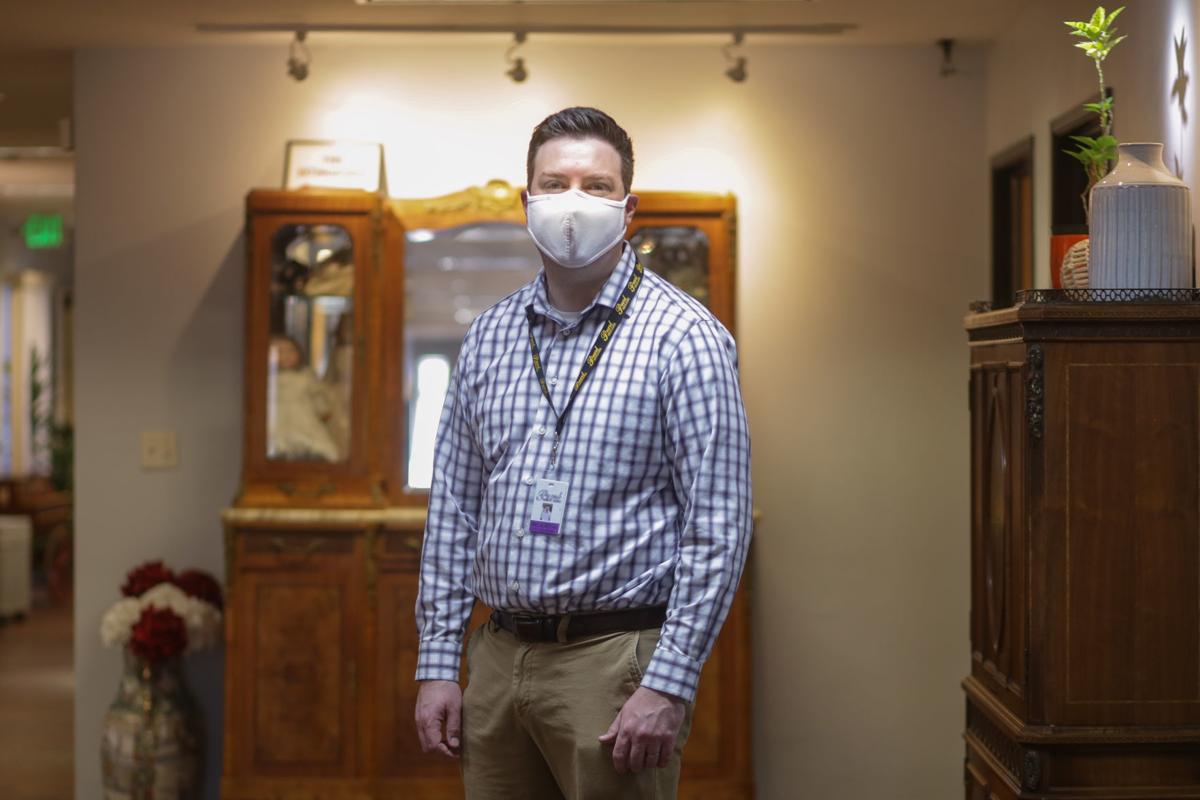 Psychologist Daniel McGrath poses for a photo at Pearl Health Clinic on Wednesday, May 6, 2020.

Psychologist Daniel McGrath poses for a photo at one of the computers he uses for telehealth at Pearl Health Clinic on Wednesday, May 6, 2020.

Psychologist Daniel McGrath poses for a photo at Pearl Health Clinic on Wednesday, May 6, 2020.

COVID-19 has turned daily routines upside down. Coping with that new reality of stay-home orders, social distancing and overall stress can lead to new mental health concerns or exacerbate issues that people already have.

Gov. Brad Little’s statewide stay-home order March 25 changed the day to day practices for mental health professionals and clients across the state. Many clinics and mental health offices have shifted their focus to provide video telehealth treatment for clients. Experts are also reaching out to clients to provide advice and resources to as many people as they can.

“We spent a good deal of time in general educating people,” said Dr. Cristina Sanchez, medical director for Pearl Health Clinic. “How do you pick space when you live in an apartment? If you’re going to go outside, how do you take care of yourself, how do you stay safe?”

Executive Director Shawn LaPray said that spring has regularly been a peak time for mental health issues, which can range from minor stressors to suicide attempts. The number of messages sent to the Substance Abuse and Mental Health Service Administration hotline was more than 10 times higher than normal last month.

“Mood and thought disorders can become more severe when the seasons change, and a global pandemic disrupts the stability of every system we rely on for support,” LaPray said.

Neither the Idaho Falls Police Department or the Bonneville County Sheriff’s Office have reported major changes in the number of mental health-related calls they have received over the last two months. The number of psychiatric calls to police dispatch in Idaho Falls did jump from 32 in April 2019 to 78 last month, which IFPD spokeswoman Jessica Clements said was partly due to the department changing how it categorizes those calls.

Anecdotally, however, both she and Bonneville County Sgt. Bryan Lovell have seen more people citing COVID-19 when they call in to dispatch or speak to police officers on the scene.

“It’s definitely a common stressor in the community, whether or not it results in more calls to the police,” Clements said.

Robert Stahn, founder of Well Spring Counseling and a licensed clinical professional counselor and master addictions counselor, said his office began moving to virtual sessions with clients in late March. By the first week of April, Stahn said close to 100 percent of his office’s sessions moved to virtual.

He said the learning curve for using the necessary technology for virtual sessions has been “relatively low” for clients and clinicians.

“The falloff in business, however, has been a quarter and a third or so, I guess,” Stahn said. “Some clients have opted to wait until we can meet in person again.”

Pearl Health Clinic began using telehealth in 2017, serving clients locally as well as those as far away as Salmon. Sanchez said virtual sessions moved to Zoom when COVID-19 arrived in eastern Idaho due to Pearl Health Clinic’s previous server used for virtual sessions becoming saturated. For the duration of Little’s stay-home order, Sanchez said she was offering her sessions from home via telehealth. Following the expiration of the stay-home order on April 30, she started doing half her sessions from the office and half via telehealth.

Due to previous experience with telehealth, Sanchez said the transition to exclusively using telehealth sessions was seamless for her.

“Being able to offer telehealth in a time like this has been incredibly useful and beneficial,” Sanchez said. “We have a really good staff in terms of front desk making sure patients were logging in. I would say it was received very positively. Care was uninterrupted.”

The Behavioral Health Center has offered some telehealth services for years. In 2015 it began doing remote assessments for patients at rural emergency rooms and hospitals to see if patients needed to be transferred to Idaho Falls and began offering tele-psychiatry appointments to patients a couple years later.

The virus has led the center to expand that option to group therapy sessions. About half of the patients who attend those group sessions now call in from home, with their video shared on a screen with the people still attending in person.

LaPray had specialized in telehealth services before he took over the Behavioral Health Center, but he said he was still apprehensive about trying to do group therapy sessions remotely. Having the patients set up a support system for each other is trickier when they aren’t in the same room.

“Doing that as a hybrid model with the telehealth component has been a pretty good transition. It keeps them physically healthy while they still improve their mental health,” LaPray said.

Dr. Dan McGrath, director of Psychology at Pearl Health Clinic, said telehealth sessions went from 1 percent to 10 percent of Pearl Health’s total sessions in March to 40 percent at the end of April. McGrath added that he and several other employees provided both in person and virtual sessions during the stay-home order. He continued to go to the office for the duration of the order and it was from there he offered both types of sessions, following protocol for infection control as he did so. Pearl Health Clinic purchased air filters between February and March, installed wall-mounted hand sanitizer dispensers in early March and employees have their temperature checked upon arriving to work and are required to wear face masks.

As more employees return to the office following the expiration of Little’s stay-home order, social distancing is enforced between clients and employees. Furthermore, to minimize contact, McGrath said the clinic’s Wi-Fi is accessible from the parking lot, which allows clients to complete telehealth sessions within their vehicle from their own mobile device or one provided by the clinic. Pearl Health employees will be back on site 50 percent of the time beginning this week while still providing clients the option to telehealth.

“It’s a balancing act of making people still feel welcome but at the same time, not risk infection,” McGrath said.

Ways to cope during COVID-19

Sheila Murdock, who leads the Community Suicide Prevention organization based in Idaho Falls, said that reaching out to someone about how you’re feeling is a key first step for those who aren’t already getting help in some way.

“Shutting it all up inside is a lot higher risk. Talking about it helps to release stress and pressure, it shows that someone cares and it actually saves lives,” Murdock said.

Community Suicide Prevention has seen a jump in the number of groups signing up for online training in suicide prevention over the last two months. The QPR (Question, Persuade and Refer) method used by the group has been taught to police officers, church groups, college classes and family members worried about someone they’re living with.

Sanchez said 90 percent of her job involves working with children and adolescents, and a common topic regarding self isolation has been managing extended periods of time at home. She said that following a routine during self isolation is important, especially connecting with people virtually. An activity she has suggested to her teenage clients is to virtually connect with someone while playing a video game. She also recommends finding something humorous.

“Anxiety and despair starts to set in when you haven’t spoken to people in a few days, if you’re watching the news. Scheduling calling or Facetiming or virtually connecting with other people is imperative,” Sanchez said.

Stahn said while this moment in history is unlike any that he has experienced before in his professional and personal life, people are noticing positive things that have come from it such as more time with family. Intertwined with those positives is gratitude.

“They can be big things like a roof over our head. It can be small things like socks,” Stahn said. “Gratitude makes a huge difference in our happiness level.”

McGrath and Sanchez are also proponents of exercise. Sanchez recommends a book, “Spark: The Revolutionary New Science of Exercise and the Brain,” by John J. Ratey, which explains the effect exercise has on the brain and stress and anxiety.

“We’re lucky in eastern Idaho that we’ve got tons of open spaces to get out and still maintain social distancing,” McGrath said.

Dr. Dan McGrath, director of Psychology at Pearl Health Clinic, said for anyone already meeting with a mental health professional, don't be afraid to ask what options are available if finances are uncertain due to COVID-19. Pearl Health Clinic has a sliding fee based on family size and income level, and McGrath added that free consultation outside of normal hours will be made available for essential workers.  Dr. Cristina Sanchez, medical director for Pearl Health Clinic, also recommended the Behavioral Health Crisis Center and Eastern Idaho Regional Medical Center's Adolescent and Acute Care Program.