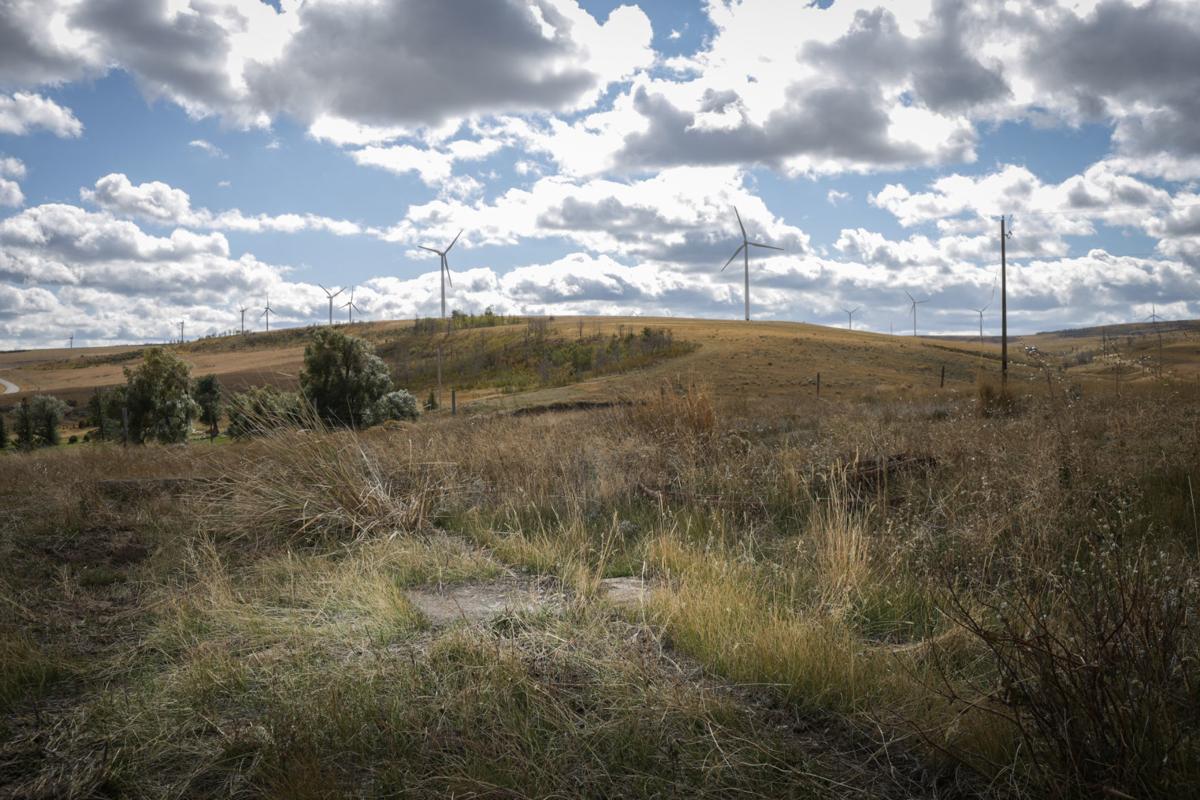 The foundation of a church and school are seen in what was once the town of Ozone near Bone. In the early 1900s Ozone was a bustling community with about 1,800 people, several stores, and schools. As the end of World War 1 came with falling grain prices and a drought in the 1920s farmers moved on abandoning the town. 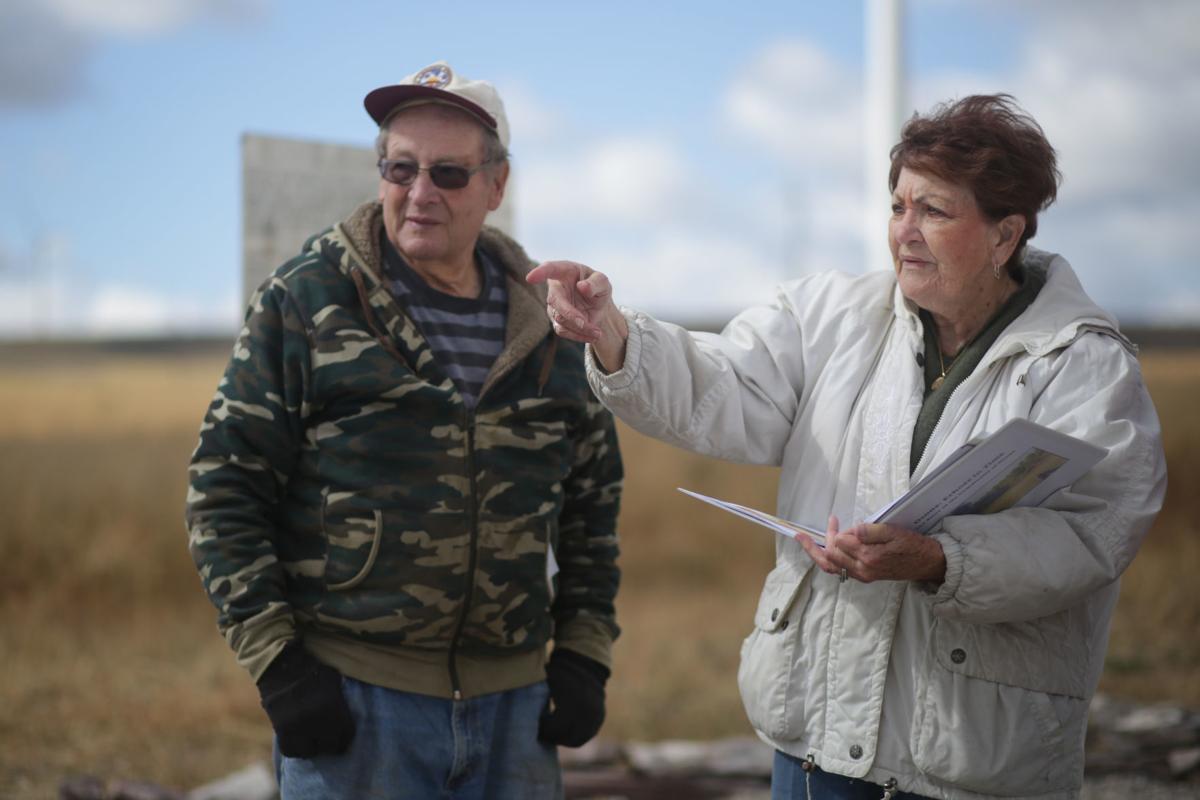 Doyle Judy, left, and Karen Fay Judy, right speak recently to a Post Register reporter about the history of the former town of Ozone near Bone. 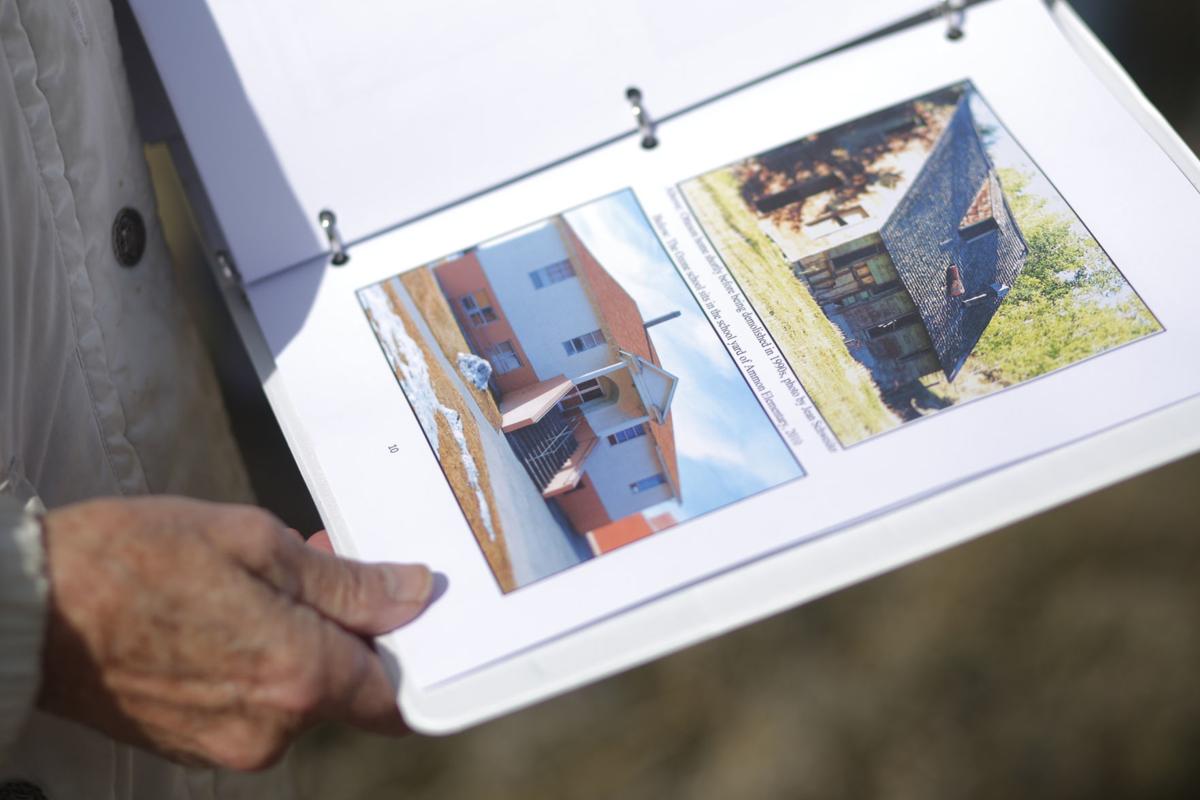 Karen Fay Judy shows a photo, bottom, of the Ammon Elementary School which used to be located in former community of Ozone near Bone on Wednesday, Oct. 2, 2019. 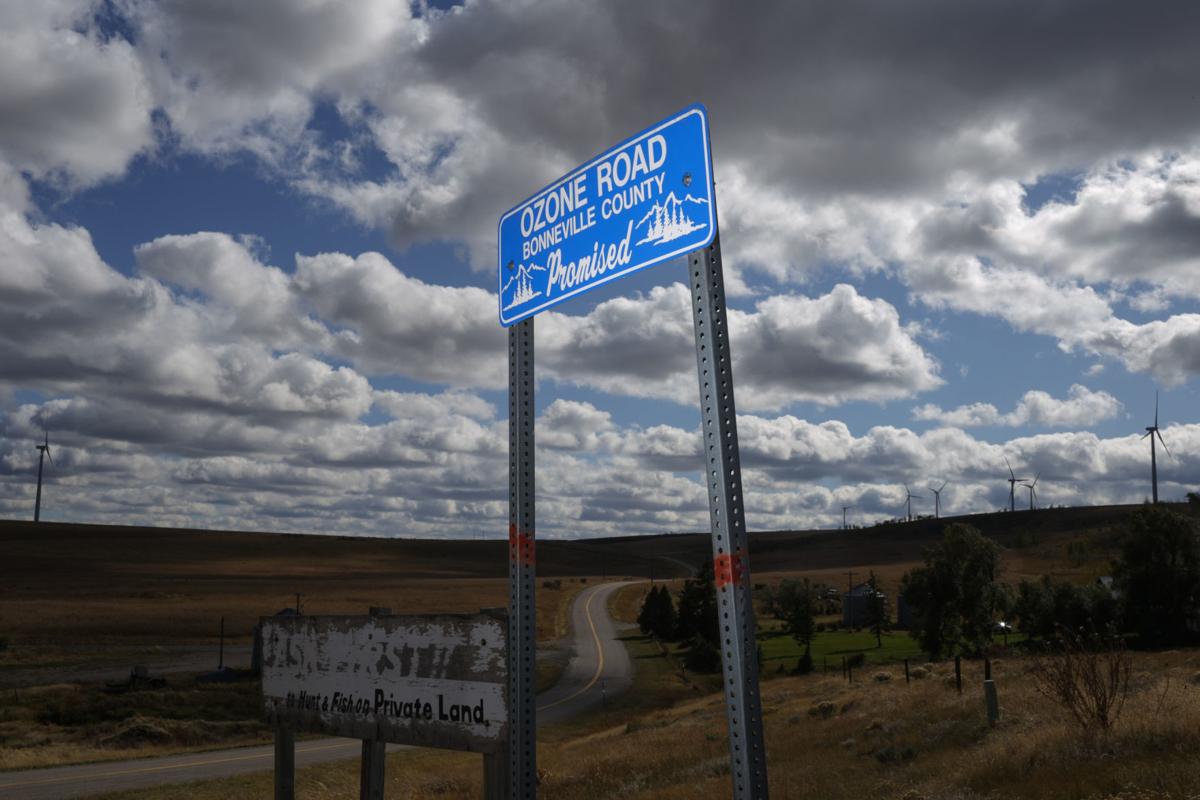 The foundation of a church and school are seen in what was once the town of Ozone near Bone. In the early 1900s Ozone was a bustling community with about 1,800 people, several stores, and schools. As the end of World War 1 came with falling grain prices and a drought in the 1920s farmers moved on abandoning the town.

OZONE — From the roadway, there’s little that separates the area near the intersection of Sunnyside and Bone roads from the surrounding grassland. Wind turbines dominate the landscape in all directions.

Still, there are traces of what used to be here. There’s a sign labeling a road along the gravel path into the foothills. There’s the cement foundation for a building. And, as of earlier this summer, there’s a metal sign that tells the story of the city that used to be — Ozone.

Karen and Doyle Judy manage the farm down the hill to the east. They are the final residents of the community, which once had 1,200 residents nestled in the foothills of the Teton mountains east of Idaho Falls.

“This is our life, our history and our livelihood right here,” Karen Judy said.

The entire area, for which Ozone served as the hub, had been home to several thousand residents in the early 1920s. A March 1914 article from the Post Register addressed the agricultural growth in the area and carried the subheadline “Millions of Dollars of Value Being Added to the State — The Ozone District.”

“One of the most substantial and prosperous dry farm communities is that of Ozone, located fifteen miles east of Idaho Falls, beyond the first ridge of the foothills,” the article read.

“Within the Ozone district there are from twenty-five to thirty thousand acres of land which has been reclaimed from what was thought a few short years ago, land fit only for sheep grazing.”

The cities have been gone for decades but it hasn’t been until recently that any public efforts have been made to create a history of the area’s forgotten towns. Last year the Judy family restored the cemetery to the south of their farm, rebuilding the fence and adding a marker engraved with the names of four residents buried there.

Over the summer they erected a sheet metal sign near the intersection of the roads, engraved with a few paragraphs about Ozone’s history. The sign will be formally dedicated at a Monday ceremony by the Ammon Sage Camp of the Daughters of the Utah Pioneers.

“I think it’s important for people to know what people were facing to have this land. Farmers struggled hard to keep their land together and keep it in their family for as long as possible,” said Jean Schwieder, a regular contributor to Intermountain Farm and Ranch who has lived in the nearby mostly empty city of Dehlin for nearly 60 years and knows the Judy family well.

The first permanent white homesteaders came to Ozone in the early 1900s, arriving via a road connecting southeast Idaho with Butte, Mont. Nephi Otteson was the first to homestead in the area in 1908 and named the city Ozone, after the fresh smell and feeling of the air.

“As Ozone and the vicinity is progressing so rapidly and you can hear the hammers of prosperity and the busy rustle from early morning till late at night, and it keeps us busy noting things. A rural telephone line is being promoted owned and controlled by the farmers as the committee appointed to take the matter up with the Bell company reported favorably with assurance of a toll line from Idaho Falls to Ozone with the people behind the proposition we feel at this writing that we will soon be in communication with the outside world,” a Dec. 9, 1914, article read.

As World War I broke out, the U.S. government asked farmers in eastern Idaho and across the country to dramatically increase their grain production. More families moved into Ozone, Dehlin, Bone and the other cities in the area. Before long Ozone had grown to include multiple schools and stores, a post office, a hotel and a baseball field shared between the cities.

A June 29, 1916, Post Register article detailed a “well-attended” baseball game between Ozone and Iona, which Ozone won 5-1. “The Iona boys put up a hard fight for the honors of the day, but the Ozone boys outplayed the visitors from the valley.”

But the city’s peak was short-lived. An extended drought hammered the valley from 1917 to 1920, leading to crop failures and leaving many farmers unable to make payments on seeds and equipment. The drought, combined with the end of the war and the Great Depression, drove the majority of the families out to areas of Idaho and Montana that were easier to live in.

By the time Doyle Judy was growing up in the area, there were only a dozen families left in the valley. He and his brother rode the bus into Ammon for school, at least when the roads were navigable in the winter. In the summer they explored the valley and caught fish in the nearby creeks and streams.

“We used to be able to catch fish down at the stream with our kids. Now, not so much,” Doyle said.

While the Judys still have a farm and take care of the land, most of the area has been turned over to other purposes. The Department of Agriculture pays the family to grow wild grass on the majority of their 10,000-acre land through the Conservation Reserve Program. Turbines from the Wolverine Creek wind project dominate the rest of the landscape.

The Judys were still able to attend an Ozone school, in a way. After the city had emptied out in the 1930s, the school was torn down and rebuilt as part of Ammon Elementary School. The building is still on the Ammon Elementary school grounds and currently serves as the school’s cafeteria.

Scattered pieces of white ceramic cover the spot where the school’s entrance used to be. The shards look like the remains of a toilet that had been used for target practice. The Judys aren’t surprised; about the only people that come out to Ozone these days are there to vandalize or to explore the remaining cabins.

“We were afraid they would get hurt because those barns and buildings were so old. They took out the stove and the telephone and whatever was left,” Judy said.

The last cabins from the original city were largely destroyed in 2017 when the Henry’s Creek Fire roared through the valley. Doyle was warned that the fire was incoming shortly before the blaze came through and quickly dug a trench around his home to save it from the fire.

“It came right up to those trees behind the home,” Doyle said, pointing at the charred clump of aspens. “We had a stack of firewood in our yard but it didn’t get to that.”

The Daughters of the Utah Pioneers is a group that holds events and builds monuments to help educate the community about early homesteaders from The Church of Jesus Christ of Latter-day Saints and the local group usually focuses more on classes.

Local branch leader Dixean Grimes said this will be the first historical dedication the 30 members in the Ammon Sage camp have done.

“We want kids to understand how easy they have it now and where they came from to get it that easy,” Grimes said.

Check out photos from the former town of Ozone, east of Idaho Falls. Ozone was founded in 1908 by Lenore and Nephi Otteson where they ran the …