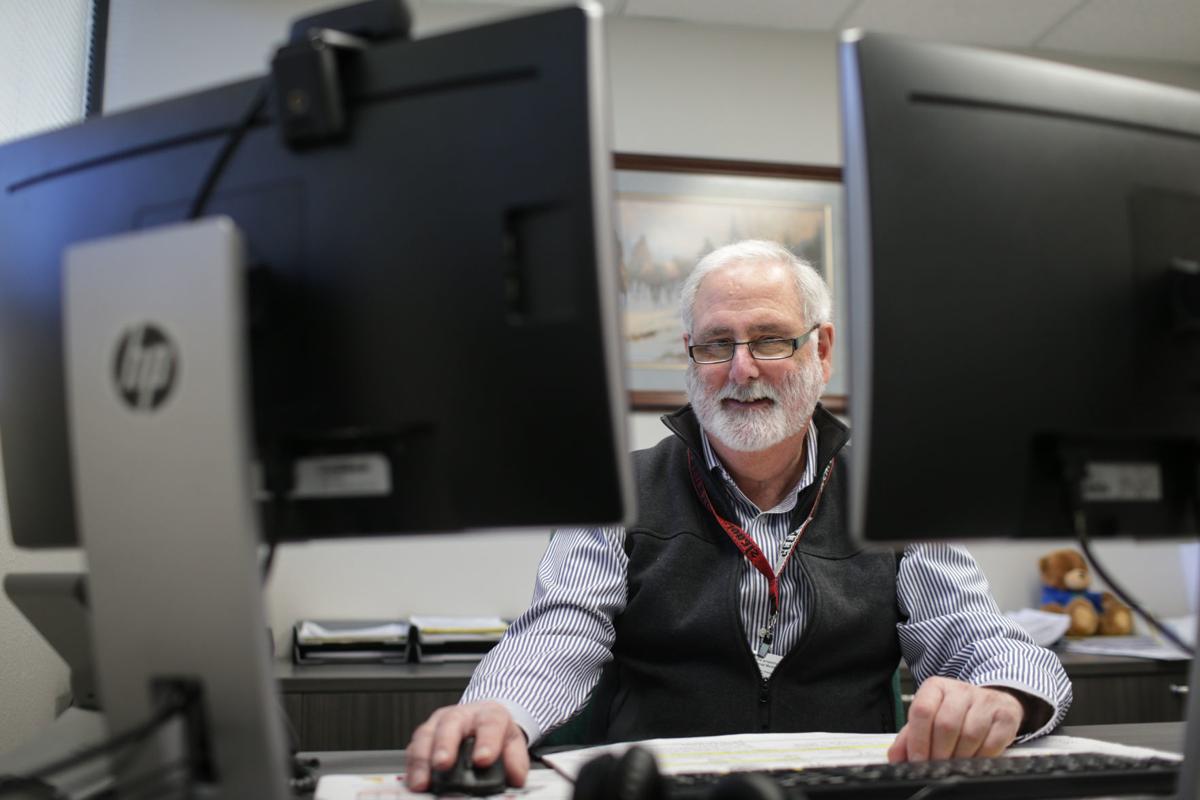 Dr. Doug Whatmore, a board member of Project ECHO, poses for a photo at East Idaho Regional Medical Center on Wednesday, March 20, 2019. 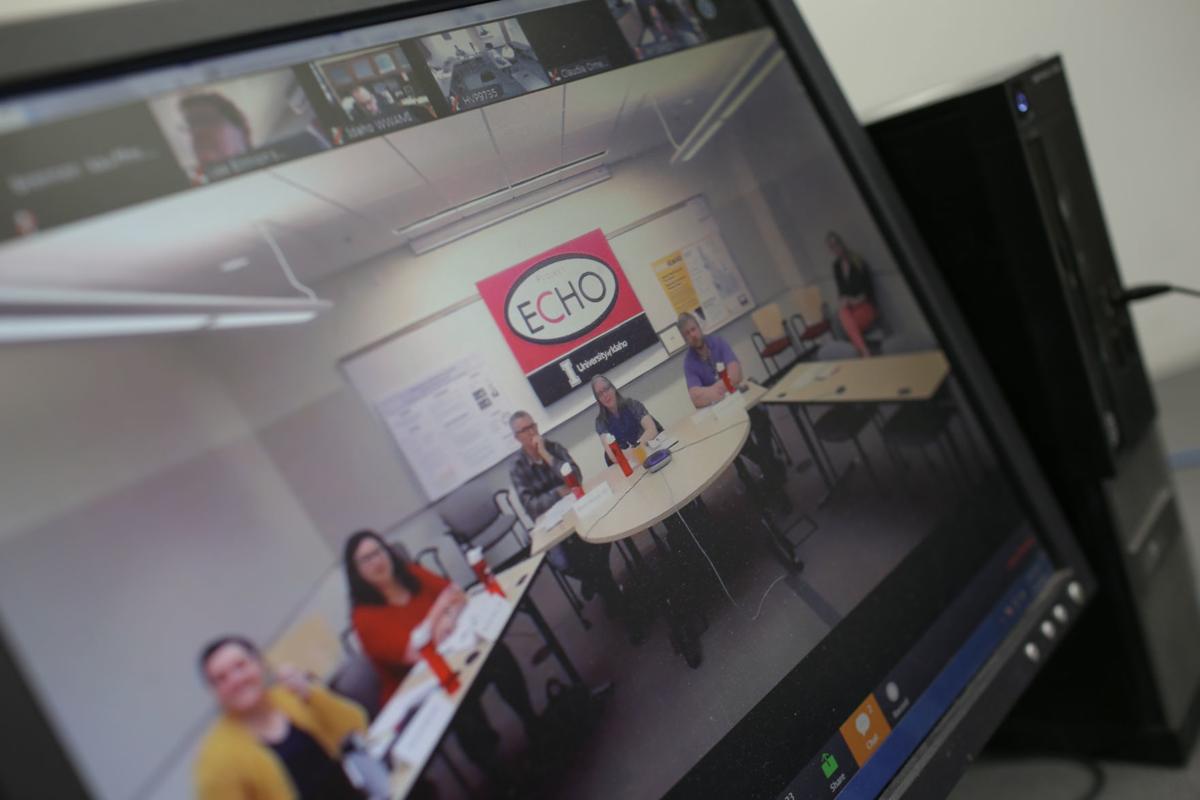 Members of Project ECHO confer during a group video chat on Thursday, March 14, 2019. 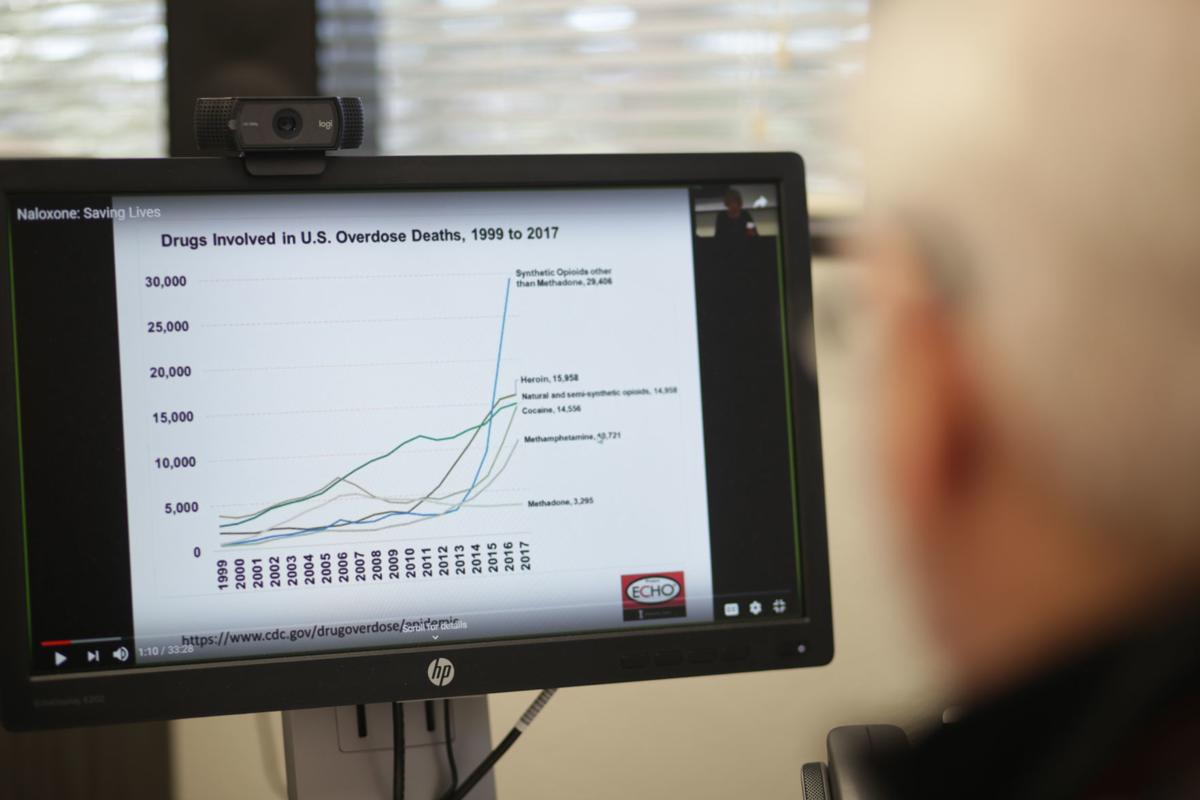 Dr. Doug Whatmore, a board member of Project ECHO, looks over a slide of drug related overdoses at East Idaho Regional Medical Center on Wednesday, March 20, 2019.

Twice a month, the doctors click the link and tune into the conversation.

They call in from tablets at home and from computers in their hospital offices, representing Moscow, Couer d’Alene, Shoshone, Hailey. At Eastern Idaho Regional Medical Center, the call is displayed on a TV screen in a staff room and residency nurses eat lunch while they listen in. The largest group gathers in a conference room in Boise, a dozen experts from local hospitals, the Department of Health and Welfare and recovery networks.

Lachelle Smith manages the meetings through Project ECHO, the only version of the international digital medical program currently operating in the state, through the University of Idaho’s Boise office to address opioid addiction and treatment. For an hour on every other Thursday, experts swap advice for treating recovering addicts in all corners of the state and rural doctors receive free online training.

“The whole idea is to de-monopolize knowledge. Patients who need care live wherever they live, and we have some critical shortages in the state,” Smith said.

Short for Extension for Community Healthcare Outcomes, Project ECHO was first launched by the University of New Mexico in 2003 to help rural clinics treat hepatitis C. Since then the program model has spread around the world — there are more than 170 hubs in hospitals and colleges in 46 U.S. states and another 100 around the globe.

The first half of every presentation is a brief lecture on a topic related to opioid treatment. Sessions have addressed the different medications that can help fight the addiction, the role of mental health treatment and the specific challenges faced in rural areas.

For the last two weeks, Recovery for Life social worker Amy Jeppesen has presented an over-arching view on the state of opioid addiction in Idaho and across the country. Idaho’s problem with opioids is not exceptionally high compared to other states. According to the National Institute of Health, the state’s rate of overdose deaths is among the lowest in the country, currently at 7.4 deaths for every 100,000 people.

But within the state, there are pockets where overdoses are a major concern, especially in eastern Idaho. Public health districts 6 and 7, which cover eastern and southeastern Idaho, had the highest overdose death rates in the state from 2013 to 2017, according to the Idaho Department of Health and Welfare. A data analysis from NORC at the University of Chicago found that Bannock and Bonneville counties had the two highest rates of overdose deaths in the state. Bonneville County’s death rate of 39.8 for every 100,000 residents was especially high, more than twice the national average and five times greater than the state average.

Bonneville was among the 11 Idaho counties who filed suit against the pharmaceutical industry in August over their role in the opioid epidemic. EIRMC clinician and ECHO board member Dr. Douglas Whatmore said some of the blame for the situation belongs with doctors who had been heavily prescribing painkillers to their patients.

“These pills were freely given out by some doctors without thinking about what else could relieve the pain,” Whatmore said.

Some evidence says the problem in Idaho is only growing worse. The 114 people killed by overdoses in 2016 is low compared to other states but is the highest number on record for Idaho. The state Office of Drug Policy reported that drug arrests and amphetamine prescriptions have doubled over the last decade and nearly 70,000 residents misused painkillers at some point in 2016.

A major trend Jeppesen focused on was the rise in drug use among 18- to 25-year-olds. That age group has begun using prescription painkillers at twice the rate of older patients and also has reported increased use of several other drugs including marijuana and LSD.

She speculated that the rising rate among young users was related to another issue — prescription drugs being delivered through the mail to addicts. A report from the United States Postal Service Office of Inspector General found that nearly all black-market drug sites used the Postal Service to either import fentanyl from China and other countries or make deliveries between states. Postal inspectors seized more than 20 tons of drugs in 2017 but experts in Pocatello said the system was still a major problem in their area.

“This is a generation that has grown up in the digital era. It’s much easier for them to access drugs by ordering them online instead of meeting a dealer,” Jeppesen said.

The ECHO opioid program is the only current version in Idaho but not the only attempt to address a problem in this way. A pilot program for a second ECHO program in Idaho was held last year through the Tribal Health and Human Services office for the Shoshone-Bannock in Fort Hall, this one focused on endocrinology and diabetes among Native American tribes.

Tribal diabetes manager Sunny Stone said she first heard about ECHO years earlier when she took part in a similar diabetes class through the original hub at the University of New Mexico. She later launched her own pilot version with the regional Indian Health Board in Portland, Ore., to focus specifically on the issue among the Northwest reservations. The pilot included about a dozen online meetings over six months and received largely positive feedback from the participants that regularly attended.

“It’s everyone working together to bring all types of information and opinions to the table,” Stone said.

Shoshone-Bannock health officials also are involved in the current ECHO program. Some of the doctors in the Community Health Clinic are receiving free Medication-Assisted Training through the program, allowing them to prescribe suboxone and a range of other prescriptions that can help patients handle their addiction. Suboxone is the brand-name version of naloxone and is the most widely used drug by police to save overdose victims and by doctors to treat opioid-dependent patients.

The same training program has also become a major feature for nurses at EIRMC. Whatmore serves in the hospital’s graduate medical program and sees the online sessions as a way for residency students to add valuable knowledge on handling opioid prescriptions and side-effects.

“Not only do they get a discussion on this but they get to see a sample of how to handle some of these cases,” Whatmore said.

The second half of every meeting is taken up with a group discussion about an actual patient case, presented by one of the doctors. The patient’s name and some specific details about them are legally left anonymous, but their doctors can still receive provide plenty of details to other medical experts to help the handle a particularly tricky case.

This week’s case was presented by Joseph Ragan at Portneuf Medical Center in Pocatello. He described a man in his 30s he had recently began treating for opioid addiction and anxiety after he moved to Idaho from a state with a worse addiction problem. While the patient was showing improvements on all fronts so far, Ragan was concerned about potential side effects of continuing to prescribe him anti-anxiety medication, such as benzodiazepine, that can have a bad reaction with anti-opioid drugs.

“My goal with him is to get him completely off of both benzos and opiates” he said.

After being briefed on the patient, the doctors gave their opinions on the situation to Ragan. The majority who spoke up congratulated Ragan on the process he and the patient have made and suggested ways to reduce the risk of the two kinds of medication interacting.

Whatmore said the program had proven helpful so far at helping the current group of doctors and patients but cautioned about how effective ECHO’s help could be without other state improvements. He suggested that without addressing the shortages in the nursing and psychiatric staffs across the state, there was only so much treatment that could be offered.

“We’re coming to a point where across the board, things are in critical need of change. Doctor’s prescribing habits, how we get people off the drugs, everything,” he said.