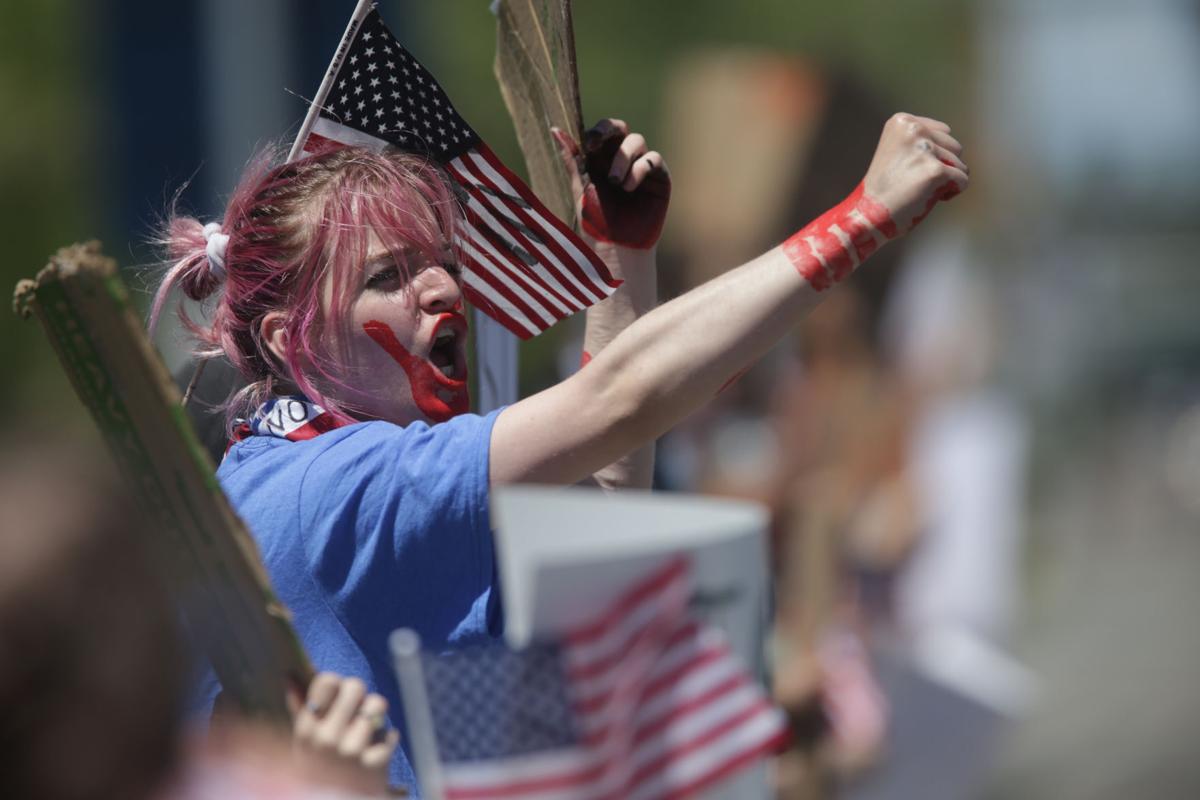 Lindsey Dellasilva chants during a protest over the death of George Floyd on Tuesday in Idaho Falls. 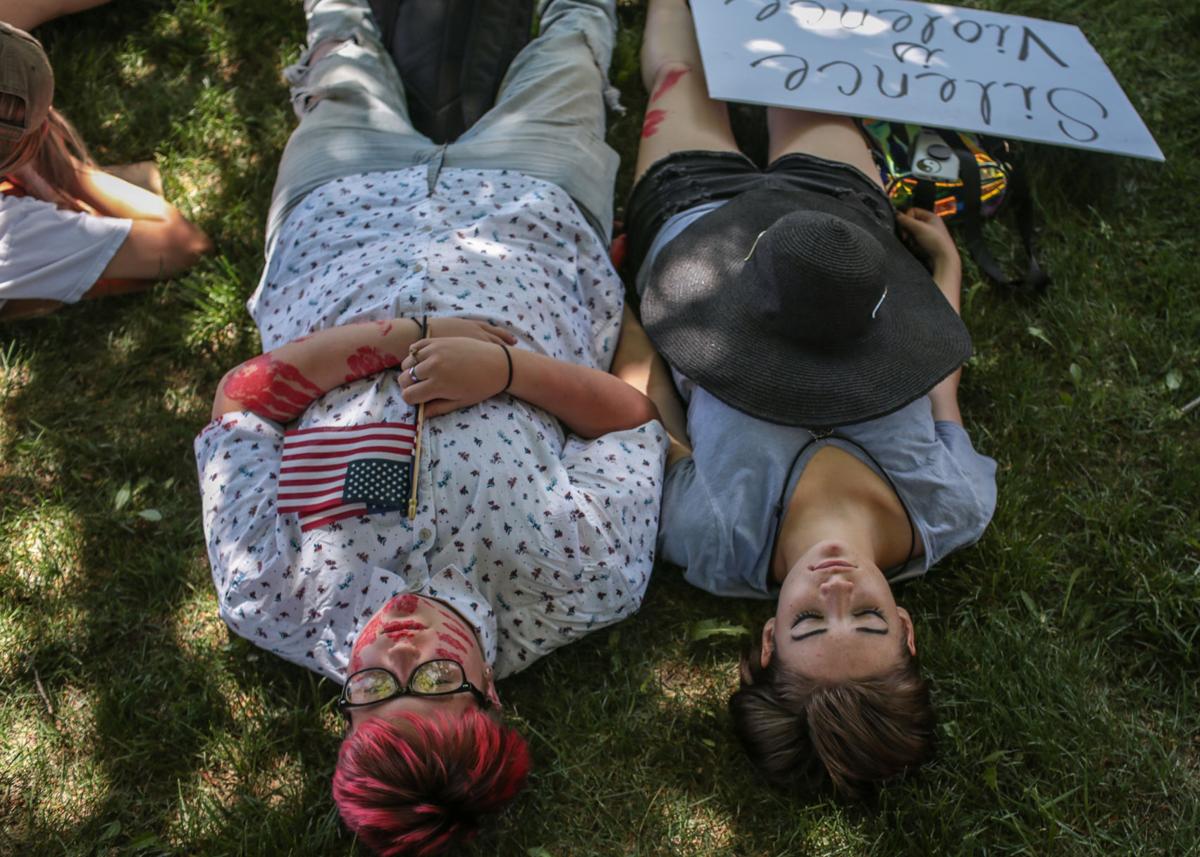 Protestors lay down in silence to remember George Floyd during a protest at the Law Enforcement Building on Tuesday, June 2, 2020. 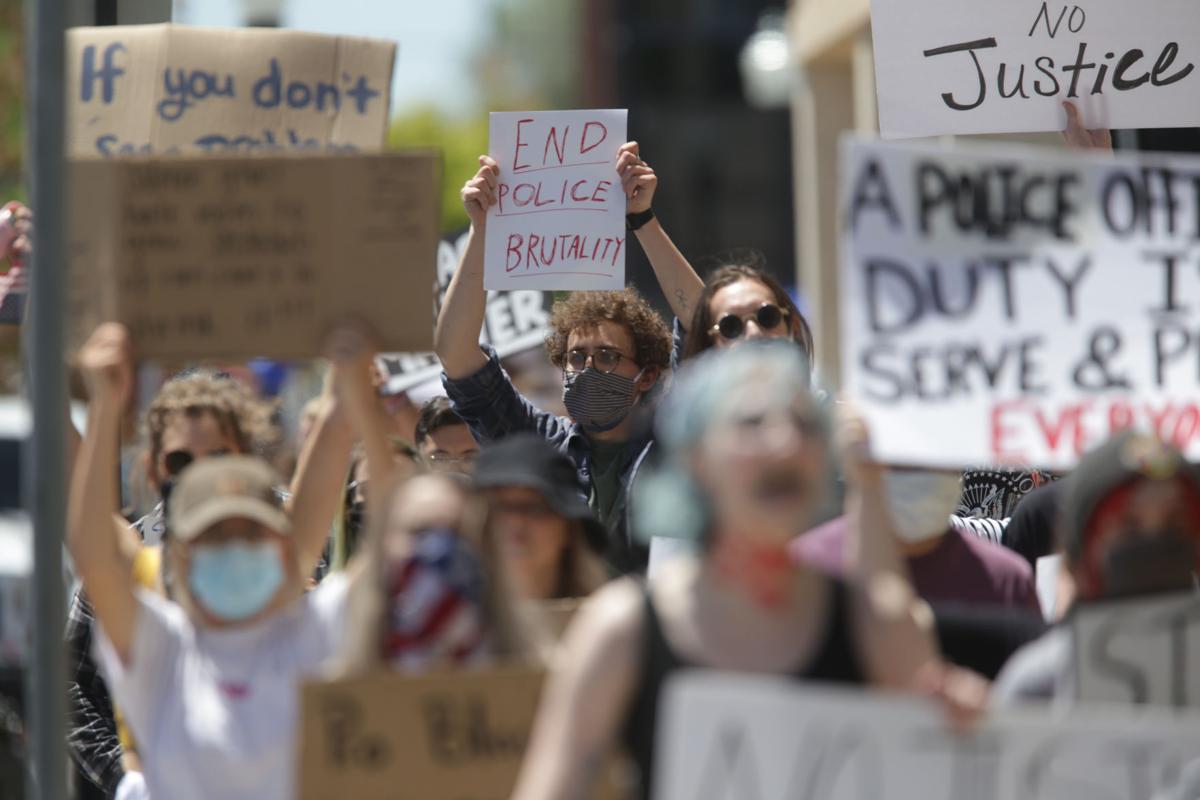 Protesters make their way to the Law Enforcement Building during a protest for the death of George Floyd on Tuesday, June 2, 2020.

Lindsey Dellasilva chants during a protest over the death of George Floyd on Tuesday in Idaho Falls.

Protestors lay down in silence to remember George Floyd during a protest at the Law Enforcement Building on Tuesday, June 2, 2020.

Protesters make their way to the Law Enforcement Building during a protest for the death of George Floyd on Tuesday, June 2, 2020.

Protesters at the bridge on Broadway Street received mostly positive responses as they joined the national outcry against the death of George Floyd.

A small group of between 50 and 60 people held signs up Tuesday for passing drivers to see. Several said: “Black Lives Matter,” “I can’t breathe,” and “White silence is violence.”

The protest, the fourth gathering in Idaho Falls in the last week in response to Floyd’s death, was peaceful, though tempers occasionally flared when those present argued with passersby and hecklers.

Protests and riots have broken out across the country after former Minneapolis Police Department officer Derek Chauvin was recorded kneeling on the neck of a man in police custody, George Floyd, who was black, for more than 8 minutes straight while three nearby officers failed to intervene. Floyd was pronounced dead from his injuries after being taken to a hospital.

Chauvin has been arrested and charged with third-degree murder and second-degree manslaughter, and all four officers have been fired. The actions of the officers raised concerns about the treatment of black people by law enforcement, and whether police are held accountable for improper use of force.

Cloe Peterman-Bronson, a 16-year-old Idaho Falls local, reached out to people in the community to arrange Tuesday’s protest, as well as a smaller protest that occurred Sunday afternoon.

“Cops around the world are saying that it isn’t right, and I agree,” Peterman-Bronson said.

Peterman-Bronson told the Post Register she was upset after seeing the video, noting Floyd’s statements that he couldn’t breathe.

While most of the responses by passersby were supportive, some were hostile. Peterman-Bronson and other protesters exchanged curse words after one driver yelled at the group, using a hostile racial slur against black people.

Michael Hays, a black man who joined the protest Sunday to show solidarity, said Sunday was the first time he had faced racist verbal abuse.

“That was the first time I’ve seen a racist person face-to-face,” Hays said.

A Chicago native who moved to Idaho Falls a year ago, Hays said racism had not been a major concern in his life. He joined the protest after seeing the video of Floyd’s death.

During Tuesday’s protest, after about two hours at the bridge, protesters marched to the Bonneville County Courthouse. Employees in the law enforcement building stepped out to watch the protest but did not interact with the protesters.

“We want to live with you guys,” said Johnson, who is black. Johnson said he was proud to see so many young people present for the protest.

The Idaho Falls Police Department announced Tuesday that it is hosting a discussion on the River Walk on Wednesday, across from the Bonneville County Courthouse. Community members will be able to attend between 4 p.m. and 7 p.m. and speak to members of the community.

“We are all aware of the conversations dominating our nation right now, and those same conversations are happening here too,” Idaho Falls Police Department Public Information Officer Jessica Clements said. “IFPD wants to participate in that dialogue in a meaningful way.”

Protests for George Floyd continued on Tuesday with protestors chanting at the West Broadway bridge before heading to the Law Enforcement building.