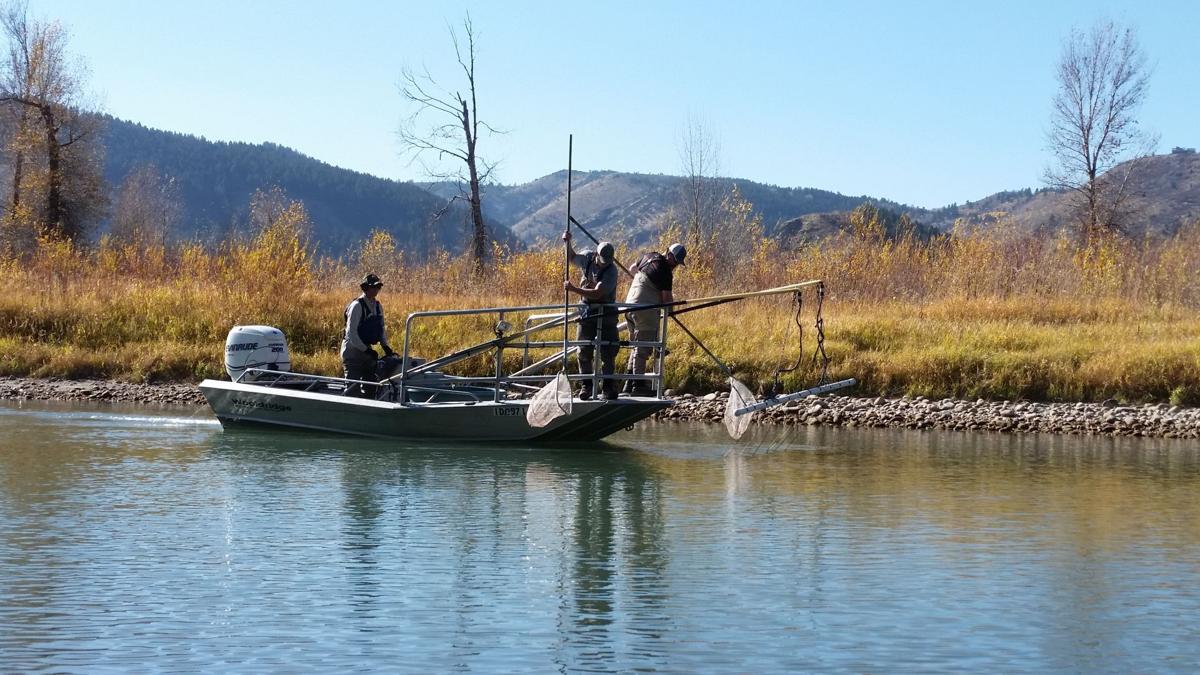 An Idaho Fish and Game crew conducts electrofishing on the South Fork. 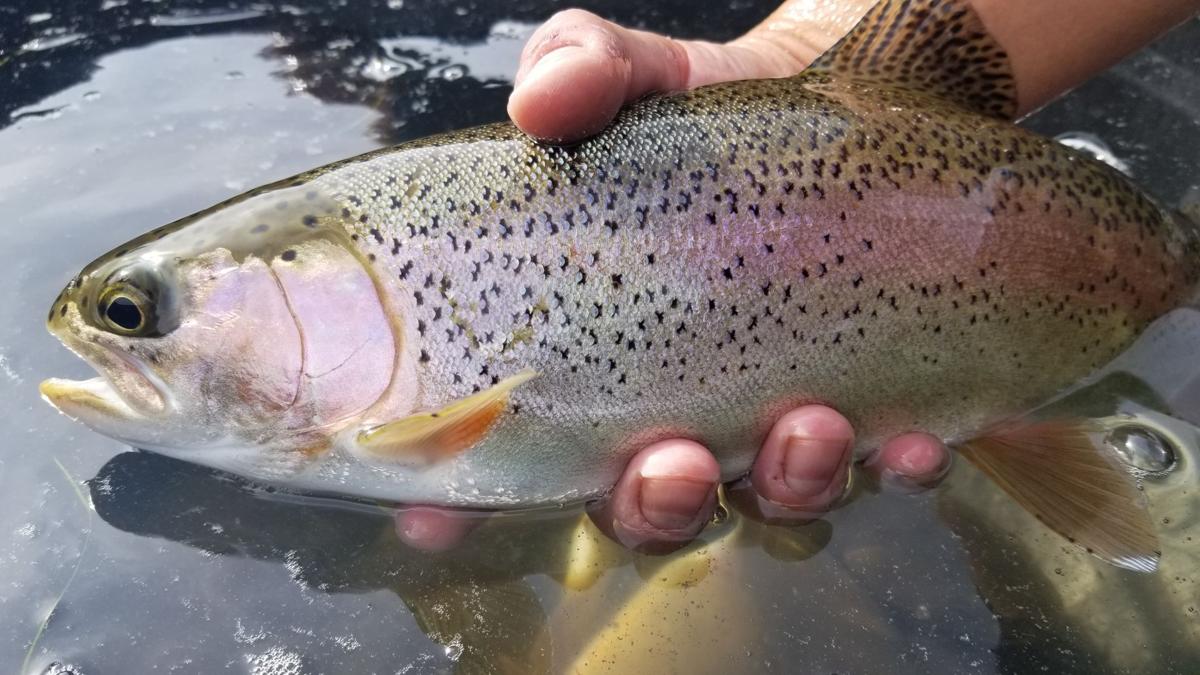 A rainbow trout is captured during electrofishing operations on the South Fork.

An Idaho Fish and Game crew conducts electrofishing on the South Fork.

A rainbow trout is captured during electrofishing operations on the South Fork.

With rainbow trout at record numbers on the South Fork of the Snake River, Idaho Fish and Game plans an aggressive electrofishing operation this spring to remove 30% or about 12,000 rainbow trout.

The intent of the operation is to protect native Yellowstone cutthroat trout in one of the species’ last strongholds in the West. Rainbow trout abundance in the river has exploded in recent years despite Fish and Game programs to curtail the population.

Outfitters who guide the South Fork have mixed feelings about the program.

“Because of the record high abundances of rainbow trout, we have a really tall order – 30% of that high abundance is a lot of fish,” said Patrick Kennedy, Fish and Game fisheries biologist. “If we remove 30% each year, our effort will decrease each year. This is the big year.”

Fish and Game’s management goal is to eventually limit rainbow trout to 10% of the trout population in the South Fork. Crews plan to start running as many as three boats to shock and remove rainbows starting in a few weeks. The temporarily stunned fish will be transported and stocked in regional ponds and the lower reaches of the Henrys Fork.

A fall fish survey on the South Fork pegged trout density at an impressive 6,302 fish per mile in the upper river below Palisades Dam. About 43% of the fish were rainbows. Because rainbows and cutthroat trout spawning times can overlap, the worry is that cutthroats will become hybridized and lose their genetic integrity. The other trout found in the South Fork survey were brown trout, making up more than 1,200 of the total fish per mile. Because brown trout are fall spawners, they don’t pose a hazard of hybridizing with cutthroats.

By removing about 12,000 rainbows, the total trout density is expected to drop to about 4,700 fish per mile, “the 10-year average is about 4,800 fish per mile. I don’t think we’ll notice that fishing changes significantly in the overall catch,” Kennedy said.

Surveys conducted by Fish and Game find that a majority of anglers want to manage the South Fork as a cutthroat fishery.

“We’re getting down to the final tools in the toolbox that Fish and Game has to manage this problem of less cutthroats to more rainbows,” said Justin Hayes, general manager of The Lodge at Palisades Creek. “We support them in their mission. We want this to be a cutthroat trout fishery as well. Our guests that come from out of the state frankly need to be educated on the importance of having a native species intact. We have to educate them about the bigger picture of where those species fit into our ecosystem and why it’s important to have them here.”

Hayes said Fish and Game’s electrofishing operation will be disruptive to his guiding business, but the agency is helping out by sharing schedules and locations “so we can work around and not offer trips where they’ll be working, which is mostly on the upper section.” He expects that after this year of heavy electrofishing, future years will be minimal.

“I understand what they’re up to, and I accept that this is what should happen,” Hayes said. “I don’t think anyone’s happy about taking trout out of the river. I’m going to support them, but I’m not happy about it.”

Kennedy said other measures to curtail rainbow trout in the South Fork have not panned out. Fish and Game has an angler incentive program offering rewards of $50 to $1,000 on several hundred tagged rainbows and rainbow hybrids. There is no limit on harvesting rainbows of any size on the South Fork. That program has not made significant inroads into the rainbow population. Part of the reason is that the catch-and-release mantra has taken hold with many anglers.

Fishing guides also tend to go with the wishes of their clients.

“It’s been tricky. We have failed as outfitters in curbing this,” Hayes said. “Those guides are listening to their guests. It’s an awkward experience in trying to get those guests to come back and if killing a trout is going to mean those people won’t come back, (guides) don’t kill that trout.”

Fish and Game has also installed weirs on the four main spawning streams feeding the South Fork in past years — Burns Creek, Pine Creek, Rainey Creek and Palisades Creek — to allow cutthroat to pass upstream and remove rainbows from the system. Now most of the rainbows are spawning in the main stem of the river.

“They don’t do really well in natural systems, but do well below dams,” Kennedy said of rainbows. “That is the biggest factor as to why rainbow trout are continuing in high abundances below the dam.”

Fish and Game plans to stock the electrofished rainbows in Louis Pond in Swan Valley, Trail Creek Pond, Jim Moore Pond and the Henrys Fork. About 100 trout planted in Henrys Fork will receive orange tags to track how far the fish travel. The worry is that rainbows relocated to the Henrys Fork might make their way back into the South Fork.

Hayes said many anglers don’t care what kind of trout is in the river, but he likes the idea of having a native cutthroat-dominated river.

“The top of the mountain in many of our opinions is being able to cast a dry fly, drift it naturally along a grassy bank and to watch that cutthroat come up in our beautiful, crystal clear waters and eat that fly right in front of you,” Hayes said. “It is the ultimate reward to fly fishing. ... Dry fly fishing is the goal we all try to achieve in our career of fly fishing. There is arguably no better place than the South Fork of the Snake River to catch a fish on a dry fly in the summer.”