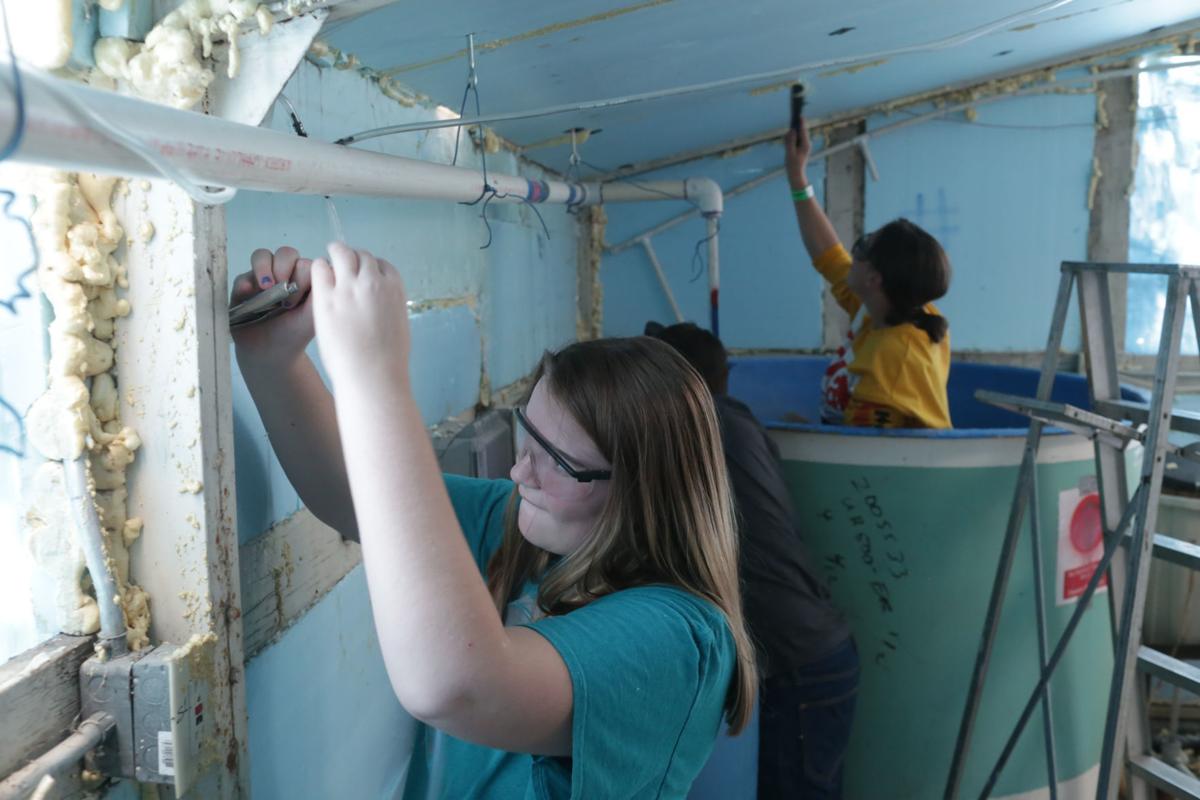 Kendal Mitchell and Laken Zartuche remove insulation to turn the former aquatics room into a greenhouse at Mackay High School. 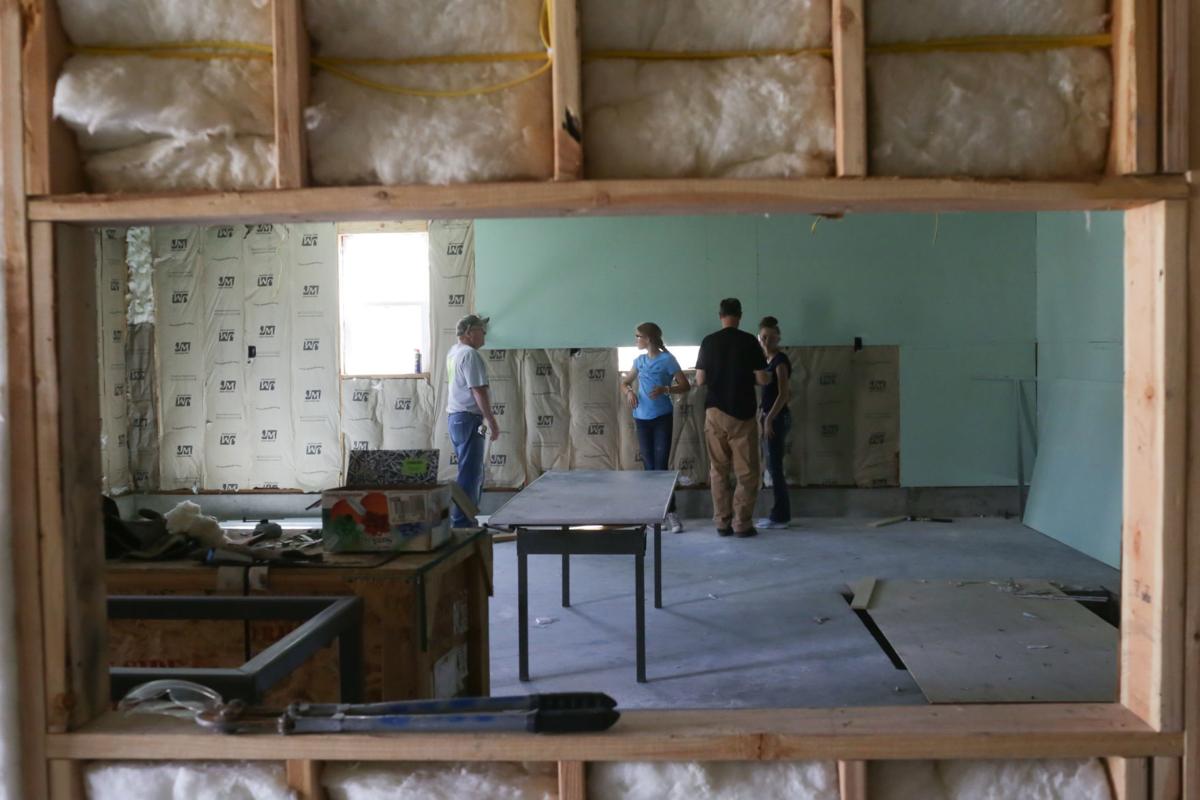 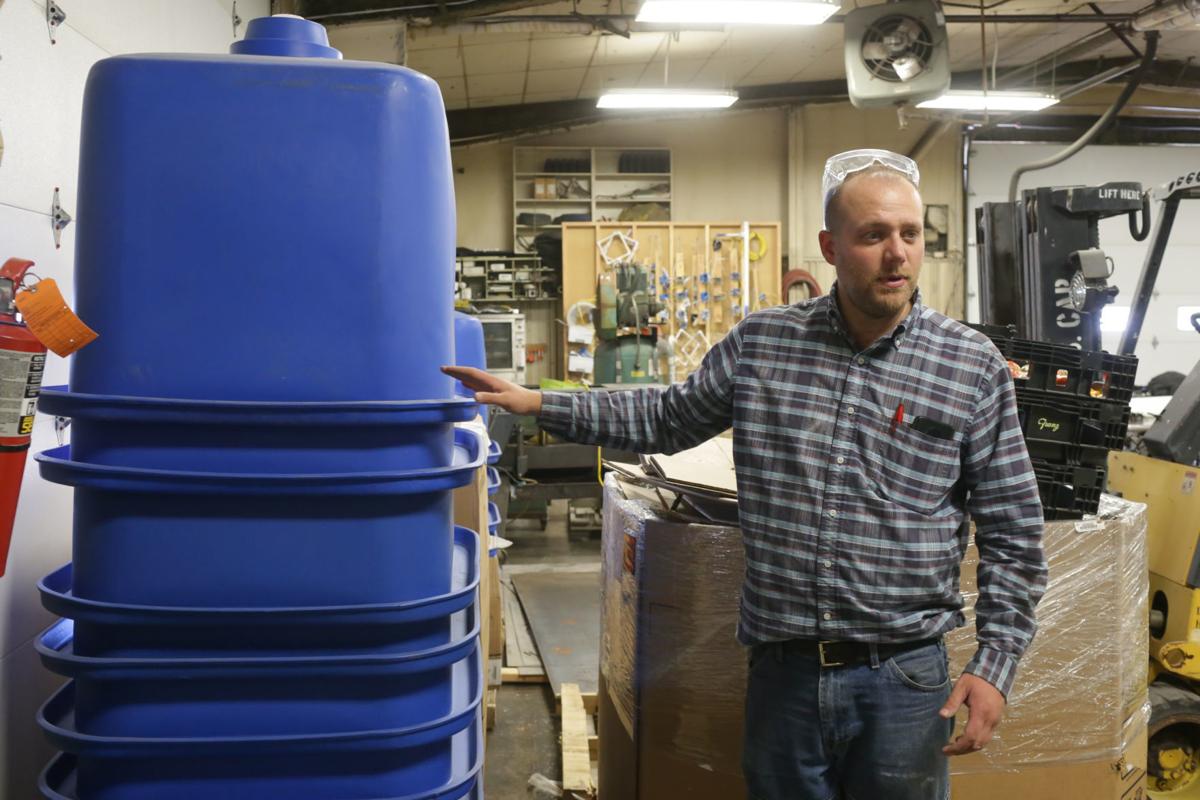 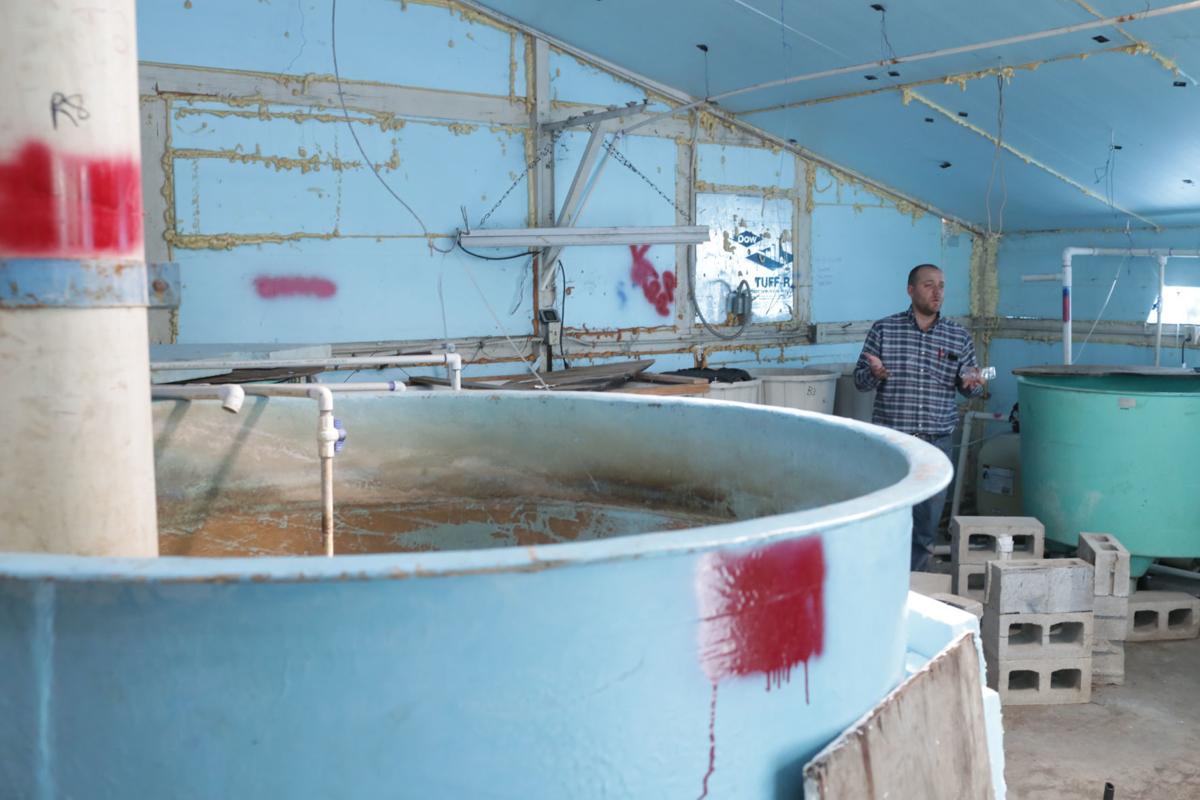 Trent Van Leuven is leading changes in some classes at Mackay High School. 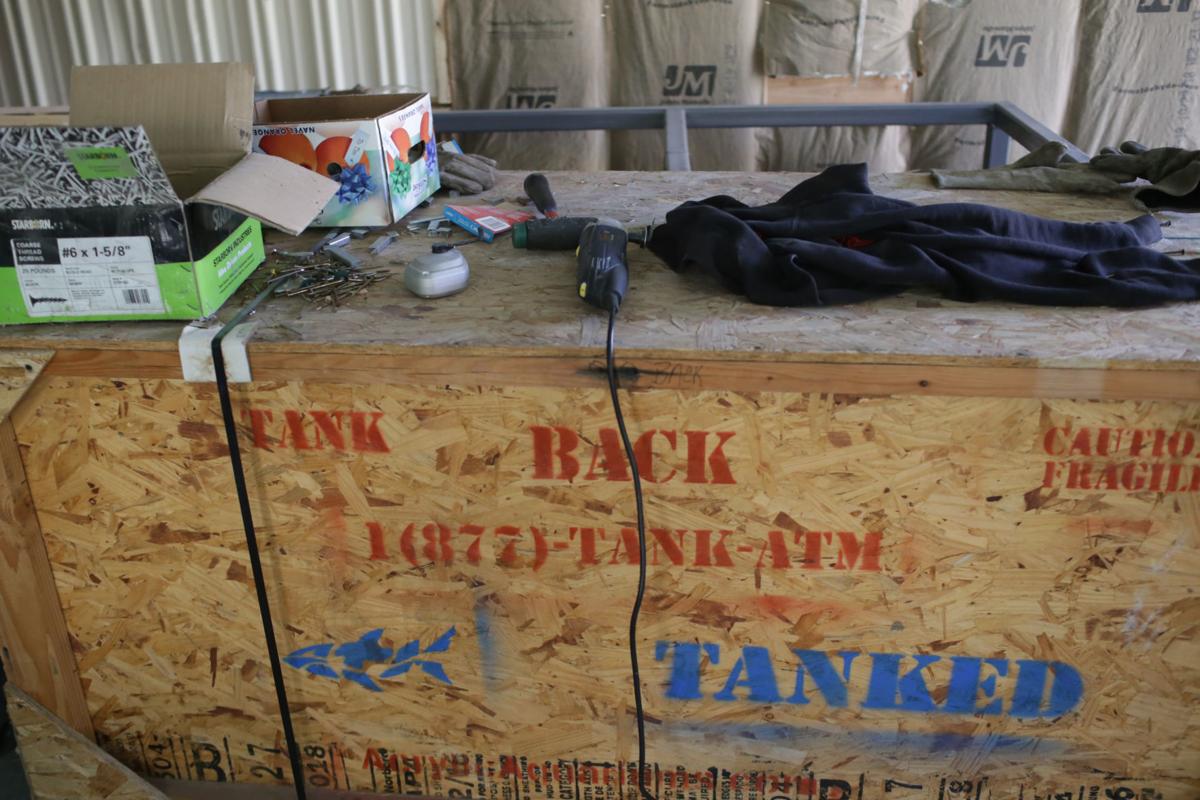 An 800 gallon fish tank is seen in the future aquatics building at Mackay High School on Tuesday, Sept. 3, 2019. 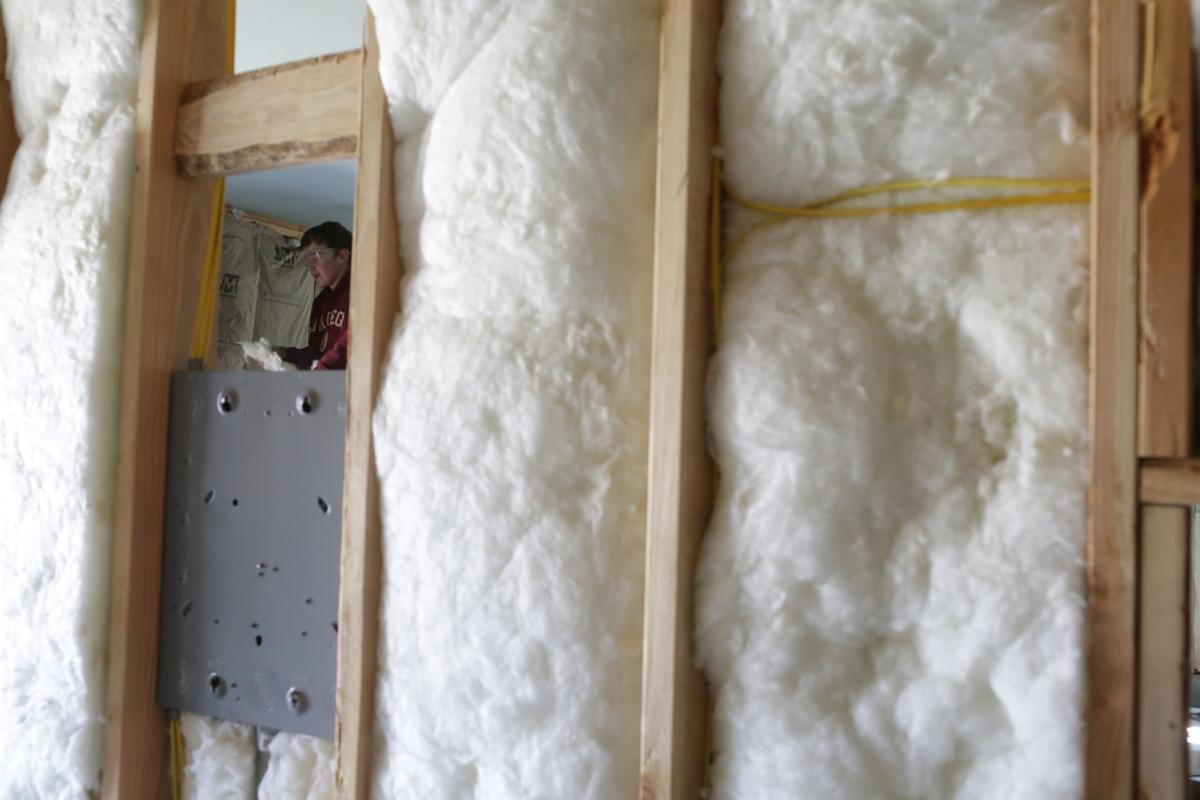 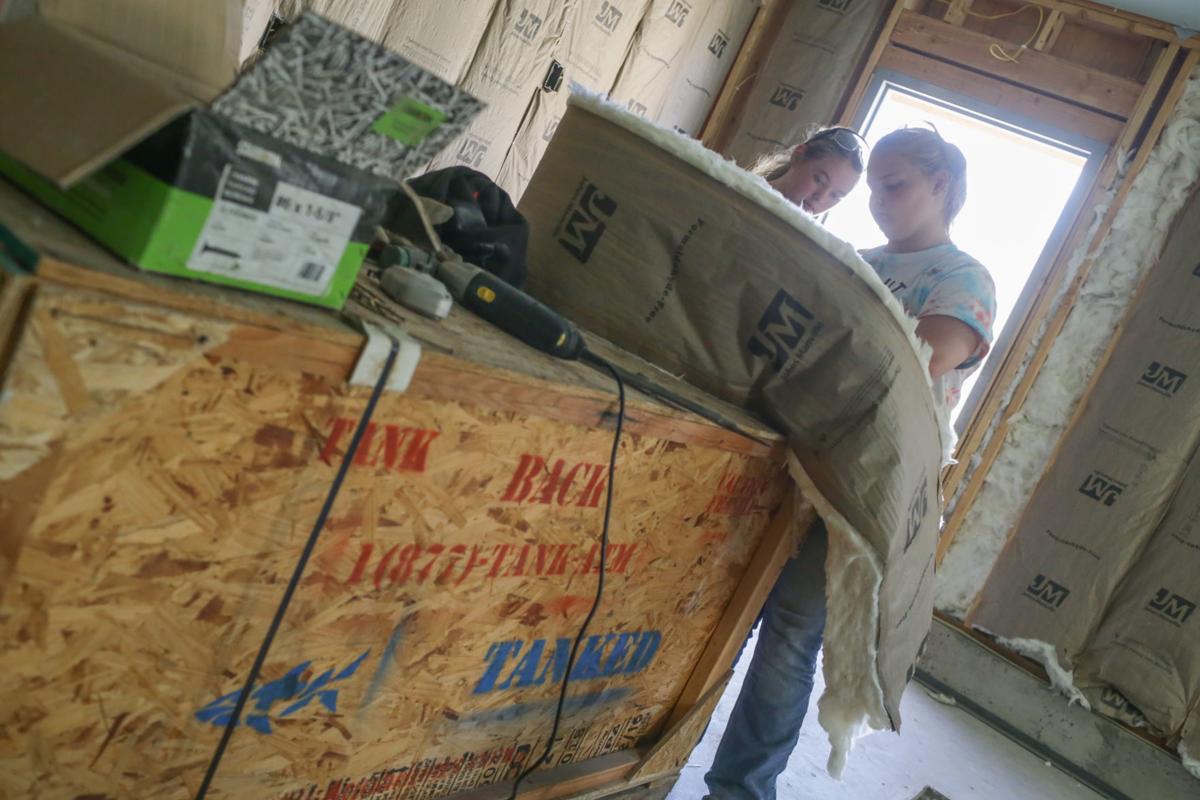 Kendal Mitchell and Laken Zartuche remove insulation to turn the former aquatics room into a greenhouse at Mackay High School.

Trent Van Leuven is leading changes in some classes at Mackay High School.

An 800 gallon fish tank is seen in the future aquatics building at Mackay High School on Tuesday, Sept. 3, 2019.

They want to become the first certified disease-free hatchery at a high school so they can supply up to 20,000 fish fingerlings a year for state waters. To do it, they are rebuilding the school’s old greenhouse/hatchery building into a bigger facility. Students and volunteers are pitching in pounding nails and running power tools.

The new facility is bolstered by past successes with its aquaculture program.

“We don’t want to get too ahead of ourselves until we get our disease-free status, but we’ll become an extension of Idaho Fish and Game hatcheries,” said Mackay High School aquaculture teacher Trent Van Leuven. “They’ll put in an order and there will be high school students producing for these particular waters.”

The school program has already had successes that state fisheries biologists have noted. With the help of grants from local businesses, Idaho Department of Fish and Game and the Idaho National Laboratory, the rebuilt facility will have larger tanks, improved plumbing and improved systems for cleaning and aerating the tanks.

In the past, the hatchery has raised tilapia, catfish, crayfish, sturgeon, kokanee, rainbow trout, golden trout and brook trout.

One of its most notable successes has been raising and stocking California golden trout in the nearby Lower Cedar Creek — the first time golden trout have been successfully planted in an Idaho stream. The project was the brainchild of former student Kali Gamett. With the help of her father, a Forest Service fisheries biologist, she obtained 300 tiny goldens in the fall of 2014. The next spring, she hauled the fingerlings in large plastic baggies stuffed in a backpack into the mountains and released them into the spring-fed creek. For the next two years, she and her father would make the 2-mile hike up to check on the stream.

“We didn’t see any fish so we thought that they didn’t make it,” Gamett said.

But, while working at the Mackay State Fish Hatchery, a co-worker told her that he noticed fish in the once fishless Lower Cedar Creek.

“My dad and I, and my brother, went up there and we started fishing for them,” Gamett said. “I threw the line in and caught one. I was so excited. We got the fish out, and they were healthy, and they were big. That was in 2017.”

The word is out to catch and release the fish to promote a healthy fishery.

“Some of those fish have been caught so many times they’ve gotten used to it and now they’re posing for the pictures,” Van Leuvan said.

The stream has since seen two more stockings of golden trout fingerlings by the school’s aquaculture program with the help of Gamett. She said friends from school fished the stream two weeks ago and caught 13-inch goldens.

“Being able to raise the golden trout has been one of the coolest things I’ve ever done,” she said.

Van Leuven said he hopes teaching fish biology to interested students will offer some an opportunity to stay in the community. He points to employment opportunities with the Forest Service, the nearby Fish and Game fish hatchery and the Clear Springs Foods fish brood facility.

“You think about careers if somebody wants to come home to Mackay,” he said. “We know there’s a mass exodus of people who leave rural remote areas for the cities. If they want to come home they have an opportunity with fish biology.”

Fish biologists from the nearby Mackay State Fish Hatchery have helped mentor the program over the past several years.

“This aquaculture program allows these students to gain knowledge and experience that will be valuable to them for the rest of their life,” said Pat Moore, manager of the Mackay hatchery. “I am personally aware of a number of students that have gone on to pursue higher education and careers in fisheries and feel that this program helped foster their interest.”

Mackay has about 500 people. Job opportunities can be rare.

“If I train a couple of fish biologists every couple of years who will stay here, that’s a win,” Van Leuven said.

He said, while several students participate in the greenhouse and aquaculture facility, only about five or six are seriously involved in the hatchery.

“We’re a small school,” he said. “We had a graduating class of 11. It’s so small, I was talking to the twins that we graduated and said, ‘Hey, what’s the challenge of graduating in such a small school?’ One of them said, ‘Probably the dating. Me and my brother counted up how many girls we kissed and we had nine in common.’ ”

The new building is expected to be completed in October and the hatchery in operation later in the school year. Despite the few numbers, several students were pitching in to help build the facility under the tutelage of local volunteers.

“Most have no clue how to measure a board,” said Gordon Vaden, a retired lumber yard owner showing two girls how to cut a hole in plasterboard with a power tool. “It’s a good skill to have, and I hope it sticks with them through their life. Some of the girls have learned how to pound nails better than the boys.”

To obtain disease-free status, the hatchery will have strict protocols for cleanliness.

“With this new lab, it will be less maintenance so we’ll be able to do more stuff rather than just constantly cleaning fish tanks,” Van Leuvan said. “(For disease-free status) you send 50 dead fish to Fish and Game and they cut them up and check them for disease. Essentially we just wash our feet when we enter the facility and keep our hands out of the tanks.”

Students and volunteers point to Van Leuvan as the driving force behind the program’s success.

“Mr. Van Leuven gets all these great ideas about things, but he actually does them,” said Gamett, who is now a Brigham Young University-Idaho student. “He does what he says he’s going to do. I didn’t realize how good of a deal it was.”

To see an online video on the release of California golden trout in Lower Cedar Creek, go to tinyurl.com/pr-fish-release.