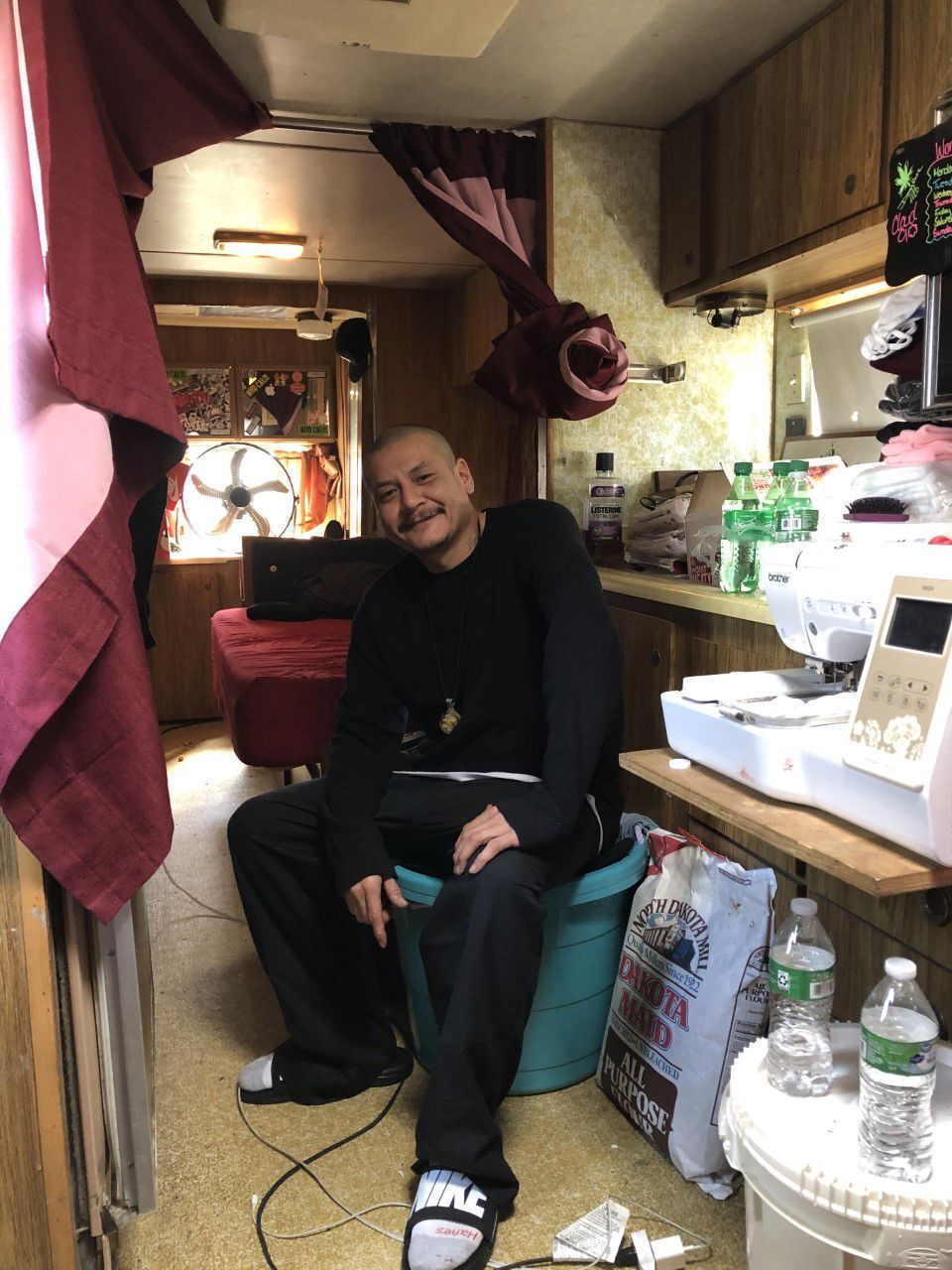 Nathan Apodaca, also known as Doggface, poses for a photo in his trailer home in Idaho Falls on Sunday, Oct. 4, 2020. 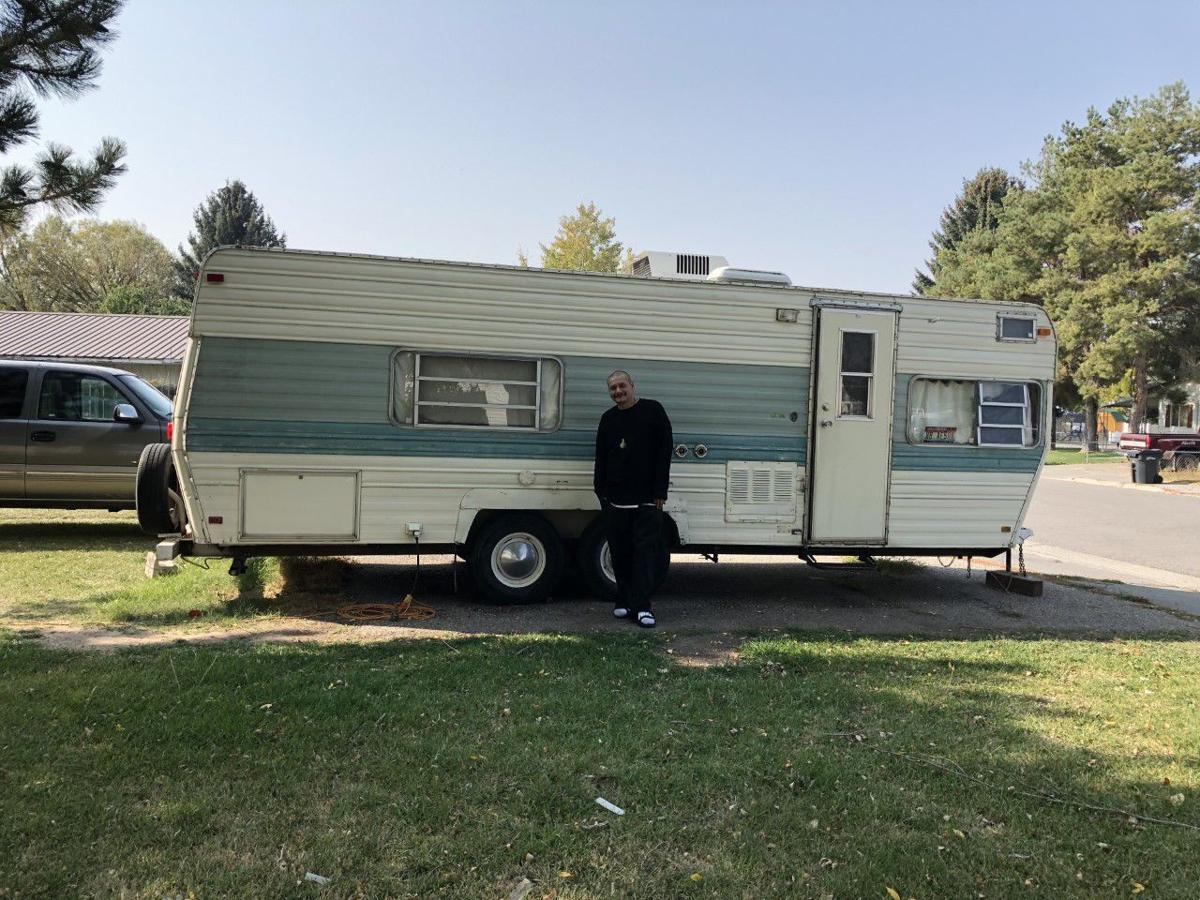 Nathan Apodaca, also known as Doggface, poses for a photo in front of his trailer home in Idaho Falls on Sunday, Oct. 4, 2020.

Nathan Apodaca, 37, sat in his RV trailer in Idaho Falls on Sunday morning. A dog with a dyed-pink moptop hopped around his feet. A sewing machine sat by his bed.

“I called my manager the other day …,” he paused and shook his head. “It just feels crazy saying that.”

It’s been one week since the video of Apodaca skateboarding while sipping cranberry juice and lip-syncing to Fleetwood Mac’s “Dreams” went viral. It has been watched more than 50 million times across all platforms. He has 1.8 million followers on TikTok; one million on Instagram.

On Sunday, Fleetwood Mac co-founder Mick Fleetwood joined TikTok just to post a video of himself recreating Apodaca’s video. That same afternoon, the internet news show “All Gas No Brakes” came to Idaho Falls to interview him.

Rapper Travis Scott asked Apodaca to make a promotional video for his new album. Ocean Spray has hinted it is looking into a collaboration. His inbox is flooded with celebrities letting Apodaca know how much they loved his vibes.

He now has a manager based out of Los Angeles who previously represented reality star Honey Boo Boo aka Alana Thompson. Apodaca turned down agent Gina Rodriguez repeatedly before she finally convinced him to sign on with her.

“We have worked with many viral stars in the past, but never anyone who has radiated the world like Nathan has,” Rodriguez of Gitoni Productions told the Post Register through email. “Influencers go viral all the time but it is rare to see someone get so much attention for so long. We don’t think Nathan is going away any time soon.”

Suddenly, everyone in town seemed to recognize him. While standing in line at Walmart recently, the person in front of him turned around to tell Apodaca he had watched his video.

“Even I know who you are,” the elderly woman in line behind him piped up.

“I can’t go nowhere. It’s movie star-ish I guess, but I’m not trying to be that guy. It ain’t me,” Apodaca said.

According to Rolling Stone, in the days following Apodaca’s post, sales for “Dreams” were up 184%. Spotify streams of the song were up 127% and Apple reported a 221% increase. Shazam said it had seen a 1,137% spike. “Dreams” reached No. 18 on Spotify in the United States.

The song was part of Fleetwood Mac’s best selling 1977 album “Rumours,” which topped the charts six years before Apodaca was born. When Apodaca’s mother tried to buy a “Rumours” CD in honor of her son’s new fame, the store had just sold out.

Parodies of Apodaca’s video are swamping the internet.

Apodaca has received more than $20,000 in donations from viewers. He gave $5,000 to his mother and bought his dad a truck. Only his sister has turned his generosity down.

“I was like I know you need a washer, a dryer, a stove, we can go get it right now. … She’s like ‘I’m stable enough, you do you, as soon as you get your house and you’re stable then you can go ahead and give me something,’” Apodaca said.

That’s his biggest dream right now: to get a house for his family. Until recently, that seemed impossible. Now, a local real estate agent has reached out and offered to help Apodaca make a down payment on a home, Apodaca said.

Yet for all his newfound fame, Apodaca could not seem more down to earth. He scoffs at the idea of being starstuck by celebrities, saying they’re all just human like the rest of us. Starting Monday, he is taking a break from his potato factory job with his boss’s blessing. But he fully expects to return in six months when all this blows over.

“It’s just weird and crazy to me because I feel normal still. But I feel a little more comfortable now because I just don’t have to wake up and just worry. Everything seems like it’s coming in line now. It’s a blessing, no doubt,” he said.

But wind the clocks back 10 days and Apodaca’s life was much different.

Apodaca lives in a trailer in his brother’s front yard. It has no running water. Every time he needs to shower or brush his teeth or go to the bathroom, he has to walk across the yard to use his brother’s facilities. He had his phone turned off earlier this year because he couldn’t pay his phone bill. He drives a Durango with more than 300,000 miles on it. It occasionally turns off without warning while he’s driving.

When things get tough, Apodaca turns to music. Music is something that has always bonded his family together. His parents are Fleetwood Mac “fanatics.” And dancing has always been a way for Apodaca to make everyone smile.

“My dad back in the day we’d watch MTV and he’d be like ‘Can you do that? Look at Michael Jackson. Can you do that?’ And I’d be like ‘Heck yeah.’ And I’d do it. I’d mimic him. It wasn’t like I’d go take classes. I was just mimicking,” Apodaca said.

Today, dancing is something he and his two daughters do together. His youngest, Makyla, started teaching him the latest trending dances on TikTok. Eventually, she convinced him to start his own TikTok account in November 2017. Around April 2020, that goofy dance “420Doggface208” account started to take off. He had around 130,000 followers.

The most common way for people to make money through social media is to sell merchandise to followers. Apodaca couldn’t afford to hire anyone to make merchandise. So he used his tax return money on a sewing machine.

“I didn’t even know how to use this machine. I got a four-hour tutorial from my lady’s niece. Her name’s Selena. I got the biggest headache. I came home and was like I don’t even want to look at that machine,” Apodaca said. “Now I can work that machine like no other.”

Soon, he was cranking out shirts and beanies he embroidered himself with the word “Doggface.”

Inbox me I kno times IZ hard so if you can’t don’t but if you gots it THEN GRAB ONE DEN ! Haha 😂 (all done by me choose your color beanie,style lettering,color stitch 🖖🏼🤪) #420souljahz #ec #downfoo #chillfoo #king #merch #comedy #ineedsmoney

And that’s all TikTok was for Apodaca. A way to bond with his daughters, show off his moves and make a few bucks selling custom beanies.

Then on the morning of Sept. 25, Apodaca was driving to his job at Circle Valley Produce, a potato processing plant. He had worked there 13 years before taking a job with firefighting crews for the last seven years. When the pandemic hit, he decided to stay local by going back to work at Circle Valley. His dad has worked there more than 30 years.

As he drove, with one mile to go, his car broke down in front of Shaka’s gas station. He had less than 15 minutes before his shift started. He didn’t have time to find someone to give him a jumpstart.

As he skateboarded down U.S. Highway 20, he pulled out his phone and made the now-famous video in one take. He arrived at Circle Valley with minutes to spare. Just enough time to upload the video.

“I want to get it done before that, because if they see me on my phone while I’m at work I’ll get sent home. So I’m trying to get everything done. There’s other people in line (to punch in), then it’s my turn. So I’m looking at the clock and see I only have two minutes. So I watch it one more time and I’m just coasting. I’m going slow. And I’m like, man, I’m usually like going fast and making it look risky and whatnot. So I look at it, look at it, and I’m like maybe I should just delete it. I seriously almost turned around and almost didn’t do it,” Apodaca said.

But Apodaca hit “post.” He could always delete it later, he reasoned.

By his first shift break, he already had 100,000 views. He couldn’t believe it. By second break, he had 2 million.

Nothing has been the same since.

To many over the age of the 30, the ways of TikTok seem utterly unintelligible. Ostensibly, it’s simply a video-making and sharing app. In tru…