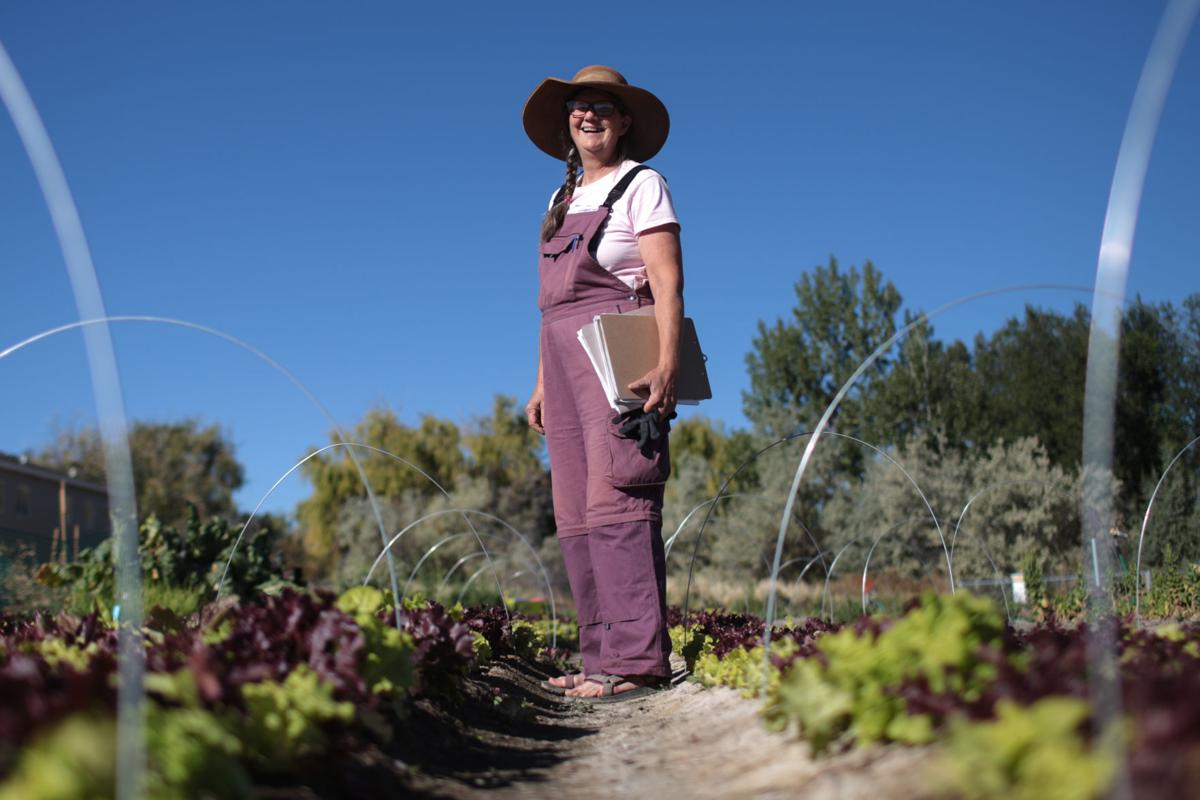 Claudia Pine poses for a photo at Happyville Farm on Wednesday, Sept. 30, 2020. 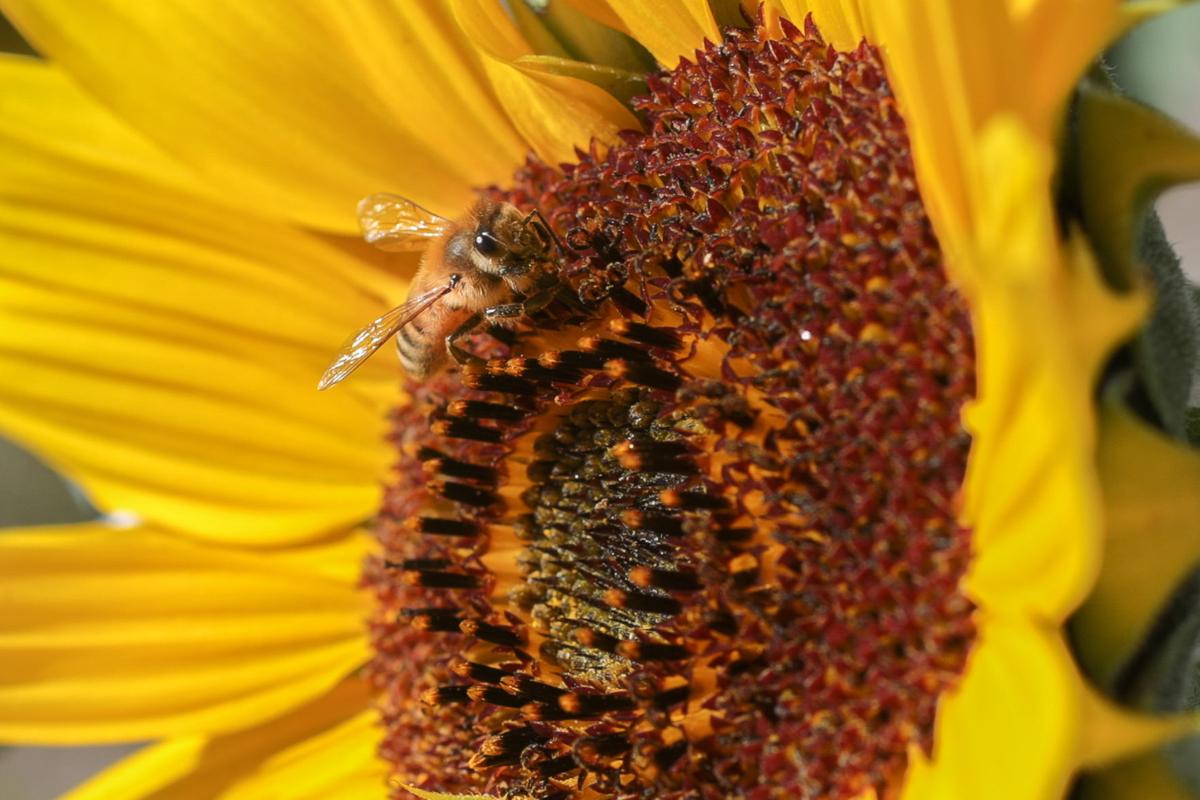 Above: A bumble bee pollinates a sunflower at Happyville Farm on Wednesday, Sept. 30, 2020.

Top: Claudia Pine poses for a photo at Happyville Farm on Wednesday, Sept. 30, 2020. 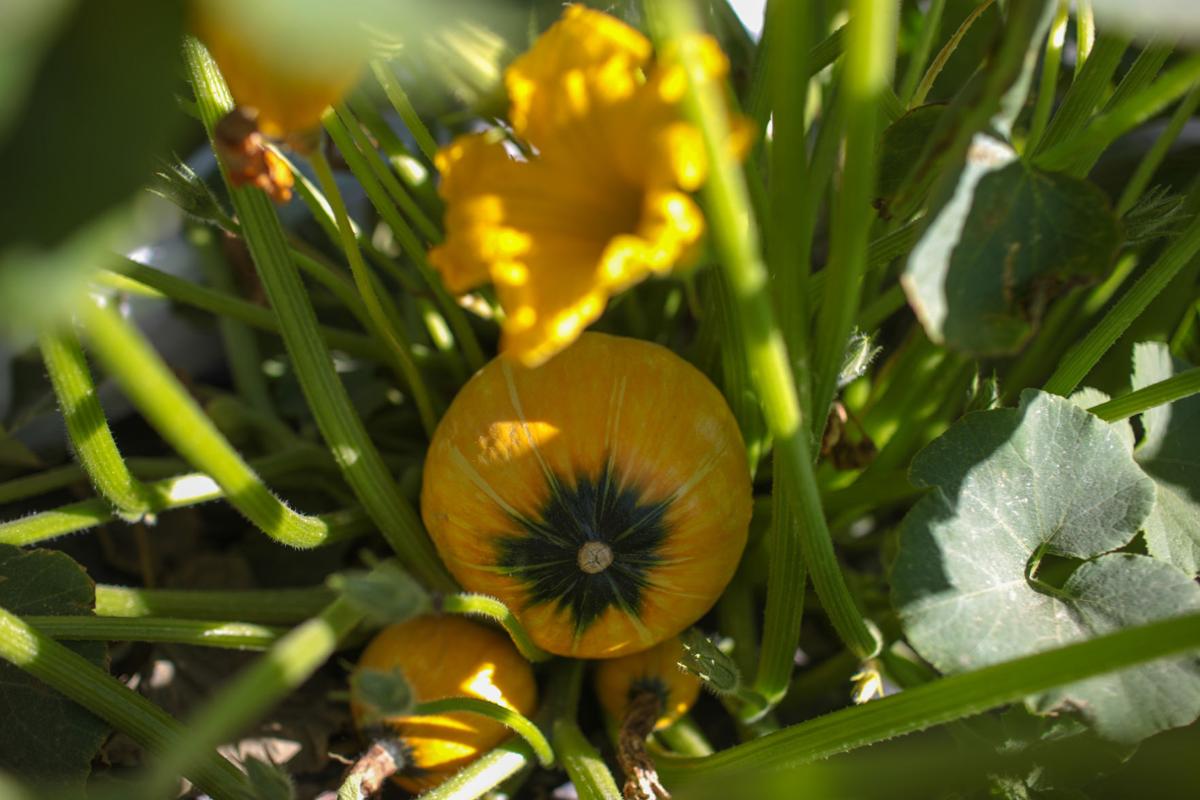 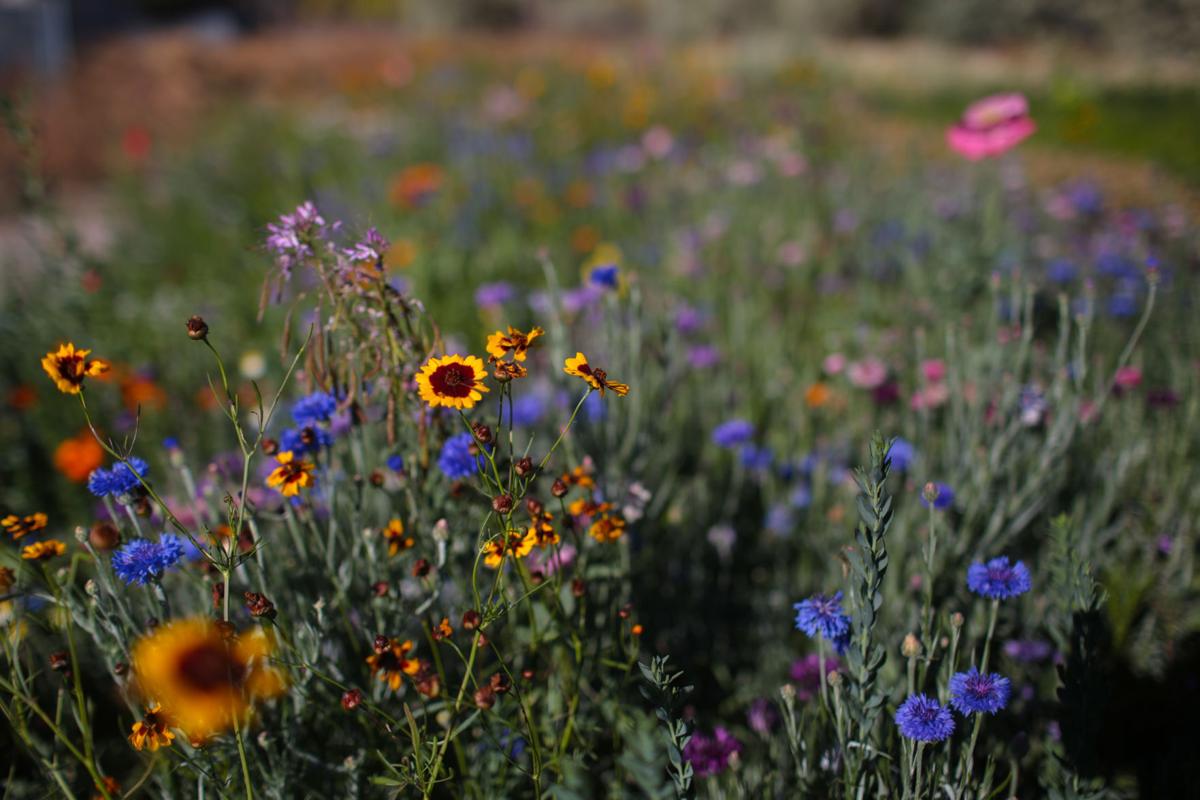 Wild flowers are seen at Happyville Farm on Wednesday, Sept. 30, 2020. 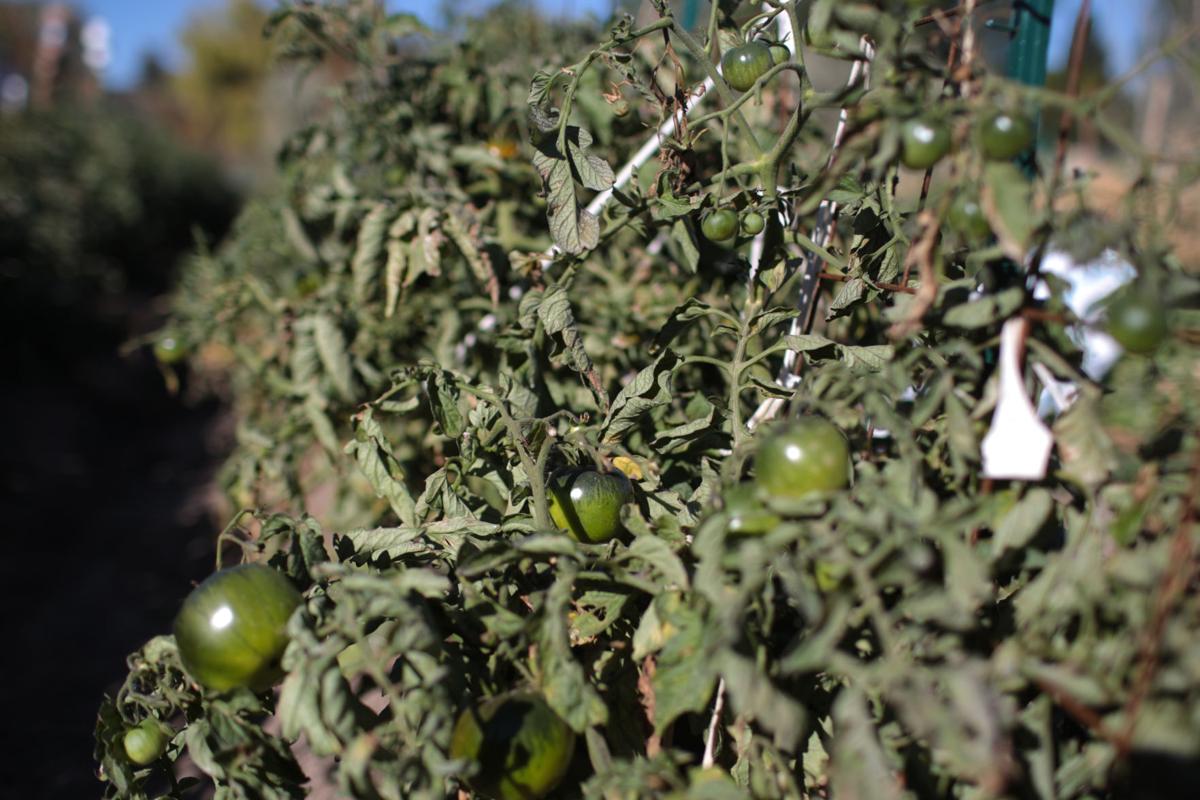 Claudia Pine poses for a photo at Happyville Farm on Wednesday, Sept. 30, 2020.

Claudia Pine spent Wednesday morning at Happyville Farm digging up carrots, picking tomatoes and washing cucumbers. By the time she was done, Pine had 58 pounds of fresh vegetables that were separated into one-pound bunches. Each family who visited the Community Food Basket – Idaho Falls that day was given one.

“Fresh, farm-raised produce is good for you. We are trying to provide people with the most nutritional food we can. People can then incorporate this fresh produce into their packaged food to help them go farther and make those meals healthier,” Ariel Jackson, executive director of the the Community Food Basket – Idaho Falls.

Happyville Farm is a large garden just over one acre in size tucked into a neighborhood west of downtown at 600 S. Saturn Avenue. The farm is an offshoot of the Community Food Basket that Food Basket volunteer Pine dreamed up six years ago. This autumn she is reaping her first harvest.

While volunteering in 2014, Pine noticed there was little to no fresh produce going home with families who came to the Food Basket.

“If you want the people who come to the Food Basket to have tasty, nutritious food, there are three routes: You buy them at the grocery store, which no one can afford including the Food Basket because they are high value. You wait for people to drive by and give you stuff that’s going bad, which is not my idea of donating to people to show you care. Or you start growing it yourself,” Pine said.

So Pine began growing it herself. She started by bringing in 10 pounds of vegetables from her own garden each week and recruited other local gardeners to do the same. By 2016, they had an official group: The Community Food Basket Gardens of Idaho Falls.

As word spread about the project, P.J. Holm from the city’s Parks and Recreation Department offered to lease her the plot of land on south Saturn Avenue. After setbacks that included unexpected construction and lack of water access, Pine and her team of volunteers were able to plant their first seeds this spring.

“I’ve realized that these sorts of projects on the outside look like they’re easy but they are not. It takes a lot of planning. We are ever-consumed,” said Sam Ellsworth, a recent college graduate who has taken to volunteering at the farm most mornings.

Pine has spent her life fascinated by things in dirt. She spent decades as an archaeologist. While an adjunct instructor and Ph.D. candidate studying environmental science at the University of Idaho, she started the campus’ sustainability center and organic farm.

She also has a degree in anthropology. One of the things she most wants to cultivate at her urban farm is a sense of community. Children will be able to learn how to grow food at Happyville Farm.

“Increasingly, even in eastern Idaho in a city like this, kids don’t grow up on farms. They have absolutely no idea where their food comes from,” Pine said.

Older people will be welcome as well. There are many seniors living in the neighborhood and an assisted living center just around the corner. Many have found their way to the garden this summer to chat with the volunteer gardeners and check on how much the peas have grown since their last visit.

“For a lot of older people, especially those with disabilities, we just want them to be able to come here and have a comfortable bench or a sturdy chair for them to sit on and be able to see other people and talk and be part of things, just be part of things. Because a lot of the national response (to the coronavirus pandemic) has just been, ‘Oh well you’re expendable,’” Pine said.

In an effort to make itself accessible to the community, Happyville Farm recently became the first grower of fruits and vegetables in Idaho Falls to be certified organic by the U.S. Department of Agriculture.

“The safest way to put a farm in an organic setting is to go organic. Don’t use things that are going to make people worried. A mom like Amelia next door can come in here with her toddler Demi and they can walk around and Demi can play in the dirt and pull off leaves and eat them and there’s no harmful risk,” Pine said.

Pine continues to work on big plans for the future of Happyville Farm. Over the next few years, she would like to find a couple additional acres, begin the kids’ program, put up a farm stand, add more beehives and build a seed library where people can come get free pots and seeds to grow their own plants.

When it comes to the garden itself, Pine wants to plant an orchard with pear and peach trees. They are the fruit most requested by Food Basket visitors because they are soft enough for elderly people to eat them with ease. She wants grapes and berry bushes along one fence. Lilac bushes will be planted along another and 150 feet of flowers to attract bees.

“It’s grown into something bigger than we ever imagined,” Jackson said.

However, there is one section of the farm Pine intends to keep uncultivated. Dubbed the “Quarter Acre Woods” in honor of Winnie the Pooh, it will be an area of wilderness for neighborhood children to enjoy.

“After all, what’s childhood without some random, wild corner to play in?” Pine asked.

Happyville Farm has temporarily suspended visitors until South Saturn Avenue road construction is completed. It hopes to reopen at the end of October.

Those looking to visit, volunteer or donate to the farm can email HappyvilleFarmIdahoFalls@gmail.com.