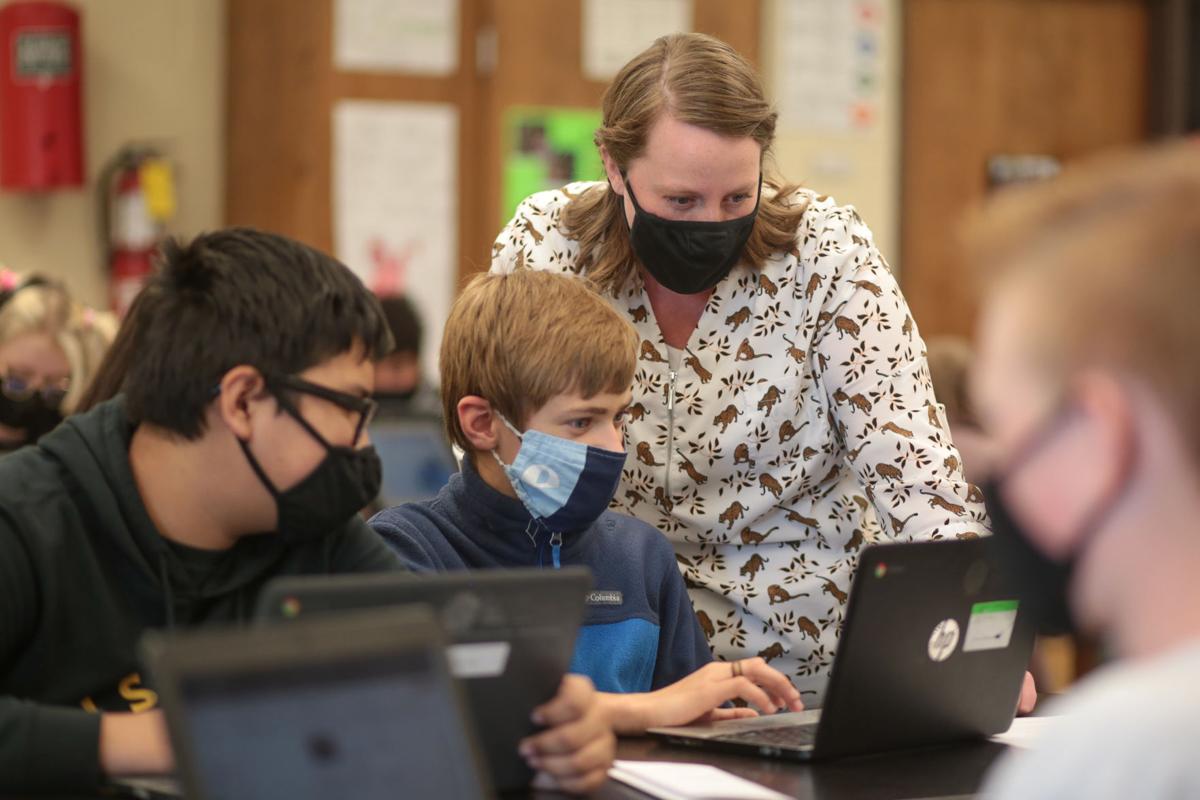 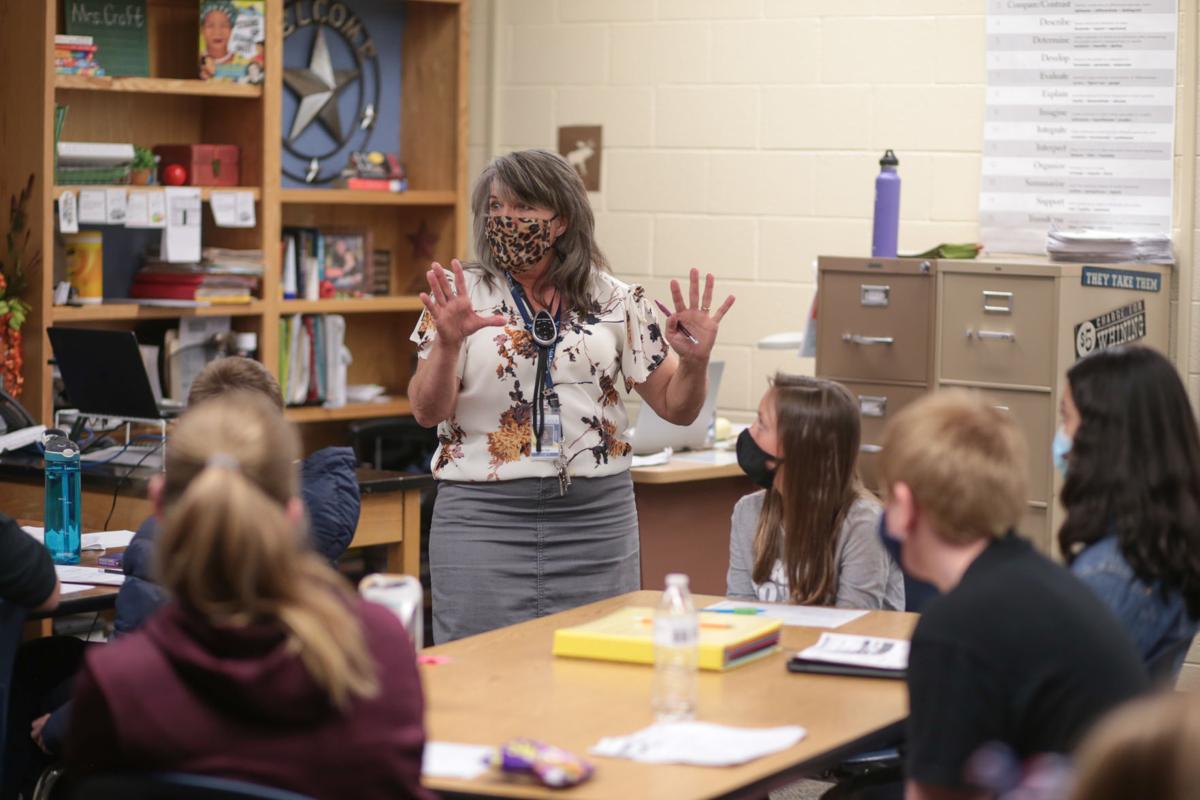 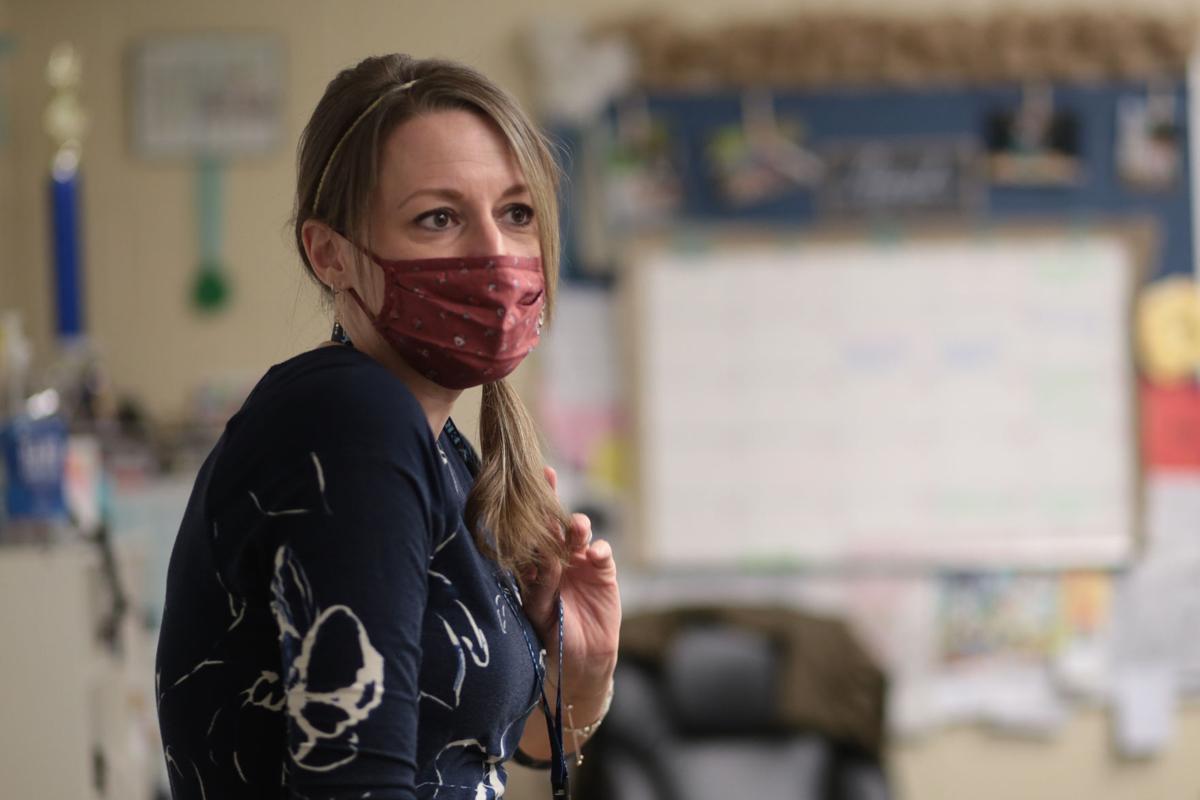 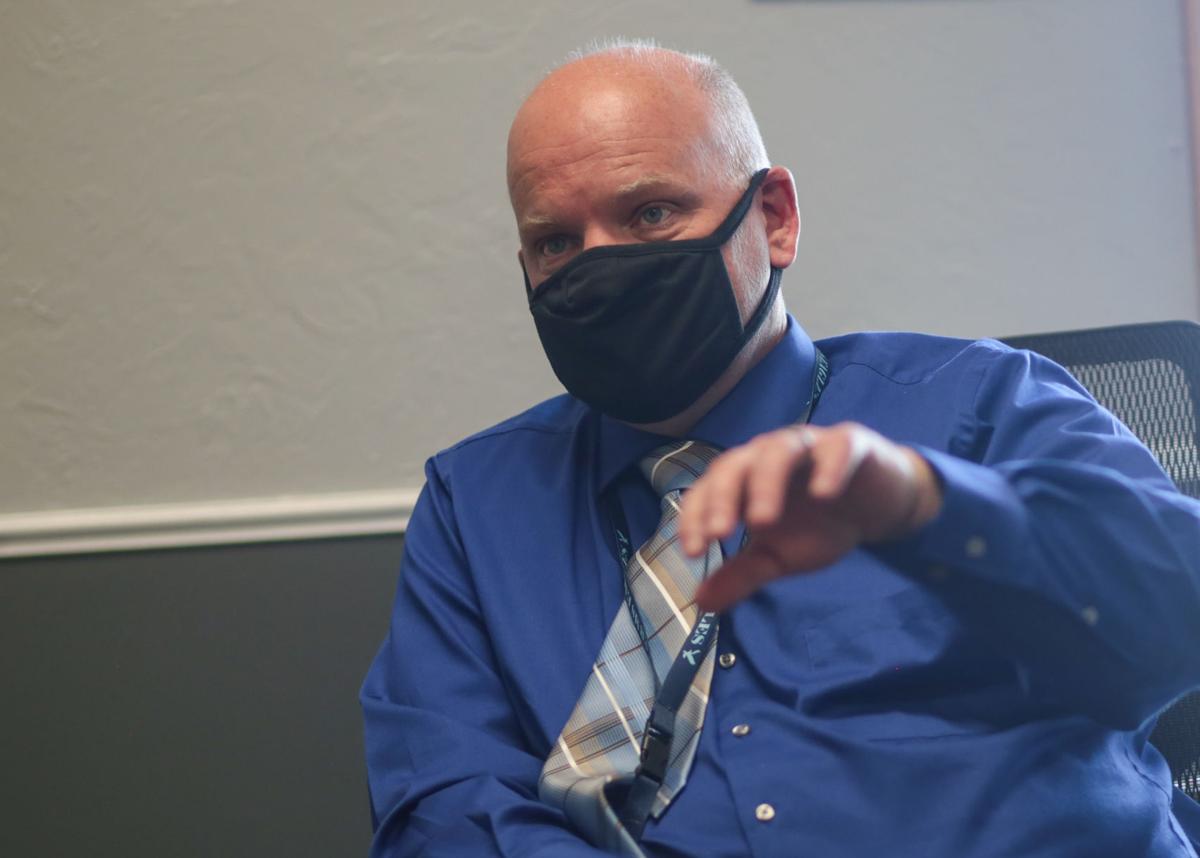 Principal Chris Powell speaks with a Post Register reporter about the effects of vaccinations amongst teachers at Eagle Rock Middle School on Thursday, April 29, 2021. 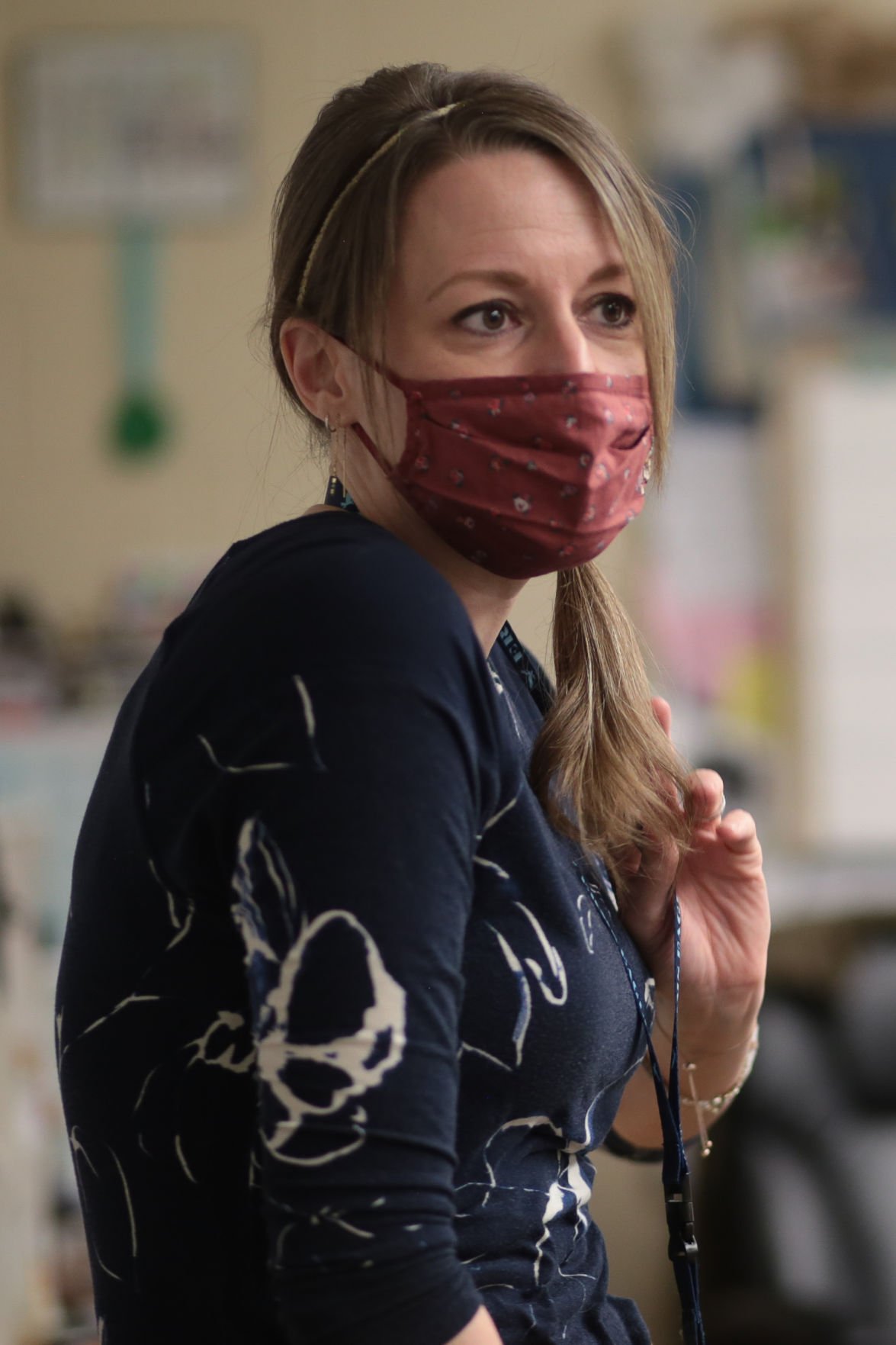 Principal Chris Powell speaks with a Post Register reporter about the effects of vaccinations amongst teachers at Eagle Rock Middle School on Thursday, April 29, 2021.

Eagle Rock Middle School didn’t make it to the first day of the school year before seeing its first COVID-19 case.

Principal Chris Powell contracted the virus in late August, right before he would have begun working with teachers. Instead he spent a short time in a hospital bed, and it took most of the fall for him to return to his normal lung capacity.

Powell said that he had been taking the virus seriously as a concern before then, but that his case was probably a “wake-up call” for his friends and other parents.

“I’m fairly young, I’m healthy, and it still put me in the hospital. I think for a lot of people I was the first person they knew who had gotten COVID,” Powell said.

His absences marked the start of a challenging year at the middle school. Eagle Rock had 16 staff members test positive for the virus as of mid-April — the most of any school in Idaho Falls School District 91, according to records shared with the Post Register. Around half of those absences came during one cluster of cases at the end of November.

The risk for teachers, and the resulting impact on students, was one of the reasons that school district employees became eligible in an early stage of Idaho’s vaccine rollout. Both Idaho Falls and Bonneville Joint School District 93 held mass vaccination clinics in January at school gyms to get hundreds of teachers vaccinated quickly.

Federal guidance on vaccinations says fully vaccinated people exposed to the coronavirus do not need to isolate unless they develop symptoms or test positive. Two weeks after the final jab, people are considered fully vaccinated — which is believed to greatly reduce the odds of contracting COVID-19 and, even more so, from being hospitalized or dying due to the infectious disease.

Local hospitals and schools say that with more than half of their staff members vaccinated, quarantines and COVID-19 cases are largely becoming a thing of the past for their employees.

Powell doesn’t know for sure how many teachers chose to get vaccinated during the district clinic, or in the months following. But the school has now gone three months since having an employee contract the virus. He told the Post Register that he felt confident that having a majority of his staff vaccinated was a key reason for that change.

“There’s just less fear. We are starting to see more energy and excitement from the kids,” Powell said.

The same pattern plays out throughout all the schools in District 91. There were 38 district employees who contracted COVID-19 in October, according to case records provided to the Post Register, and just 31 employees who caught it during the first three months of this year combined.

Across town, Bonneville Joint School District 93 also is seeing the benefits of the vaccines. Thunder Ridge High School Principal Douglas McLaren estimated that the school has around 80% of its staff vaccinated against COVID-19. The high school had three staff members test positive for the virus in April, but no cases between December and March.

McLaren said spring is often a challenging time to keep a fully staffed school during a normal year. Teachers get the flu, coaches travel with students for spring sports, and employees start taking personal days as the end of the year approaches.

“Had COVID been on top of that, I can’t imagine how we would have had enough staff with combining classes or something like that,” McLaren said.

Bonneville schools reported 249 cases of the virus among its staff during the first half of the school year and 60 cases during the second half. When Bonneville County saw its number of COVID-19 cases begin spiking again in March, school employees saw a smaller increase in cases than students did.

Seventh-grade teacher Amanda Allen agreed on the attitude changes that have happened at Eagle Rock since the vaccine rollout. She saw more teachers spending time in the cafeteria and fewer students who were missing school because of exposure to someone who had tested positive. Allen was one of the teachers who received the vaccine earlier this year, though she said it wasn’t a quick decision.

“I looked at a lot of stories and studies. I had some worries about what the messenger RNA in some of the vaccines might do. But I’m a teacher, not an expert, and I deferred to (the scientists’) trust,” Allen said.

State health officials have said they don’t have data that shows how many health care workers have been vaccinated. But anecdotally, the vaccine seems to be successful in keeping staff shortages at bay — nearly five months after health care workers were first made eligible.

“In my conversations with health care providers, they have seen less people out due to being ill or exposed to COVID,” Idaho Department of Health & Welfare Director Dave Jeppesen said during a news conference on April 27.

The lull in staff infections now starkly contrasts with late last year, when hospital staffing concerns and a wave of COVID-19 patients sparked worry about a possible hospital crisis that the state eventually dodged.

Last year, Eastern Idaho Regional Medical was often having up to 10 workers test positive each week, said Dr. Tim Ballard, EIRMC’s chief medical officer. Since the hospital wrapped up its vaccine clinics and cases mostly declined across the region, Ballard said only 20 staff tested positive from February to late April.

At least 65 to 70% of EIRMC staff had reportedly been vaccinated by late April, Ballard said. The true number could be higher because not all workers were vaccinated at EIRMC and not everyone reported their vaccination status to the hospital, Ballard said.

Although officials and hospital leaders have said that health care workers who contract coronavirus had become infected outside of their workplaces, the effects of employee sickness spill over into hospitals.

“I think we did a really good job of helping to educate employees on good ways to protect themselves, not only at work, but when they were away from work,” said Casey Jackman, chief operating officer at Idaho Falls Community Hospital. But people still interact with each other, he said.

“At times, that exposure happens without you even knowing about it,” Jackman said.

Jackman said he’s not aware of any employees having to quarantine due to a positive COVID-19 test since the vaccine became widely available.

“As you can imagine, we’ve had unprecedented throughput in our facility,” Ballard said. Missing a few employees in critical areas, like COVID-19 wards and intensive care units, he said, “can dramatically impact our ability to take care of patients.”