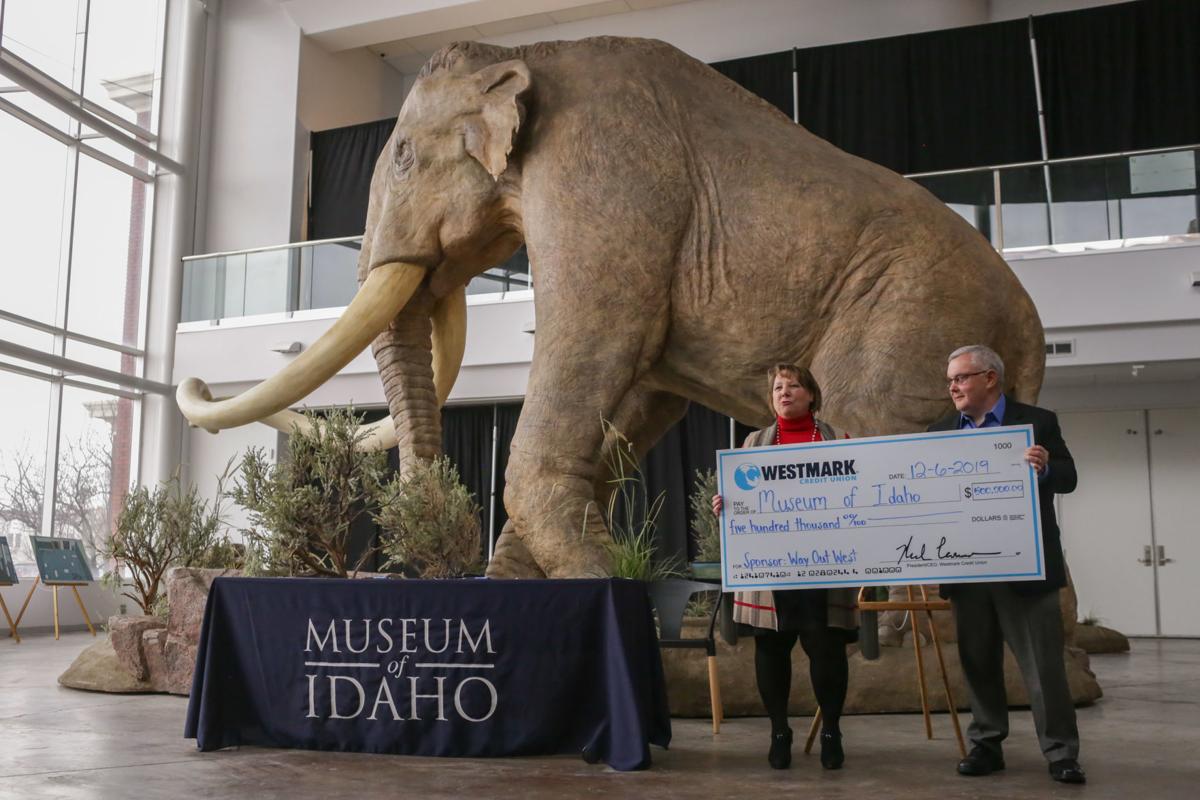 Museum of Idaho Executive Director Karen Baker speaks to the press after receiving a $500,000 donation from Westmark Credit Union President and CEO Rich Leonardson at the Museum of Idaho on Friday in Idaho Falls. 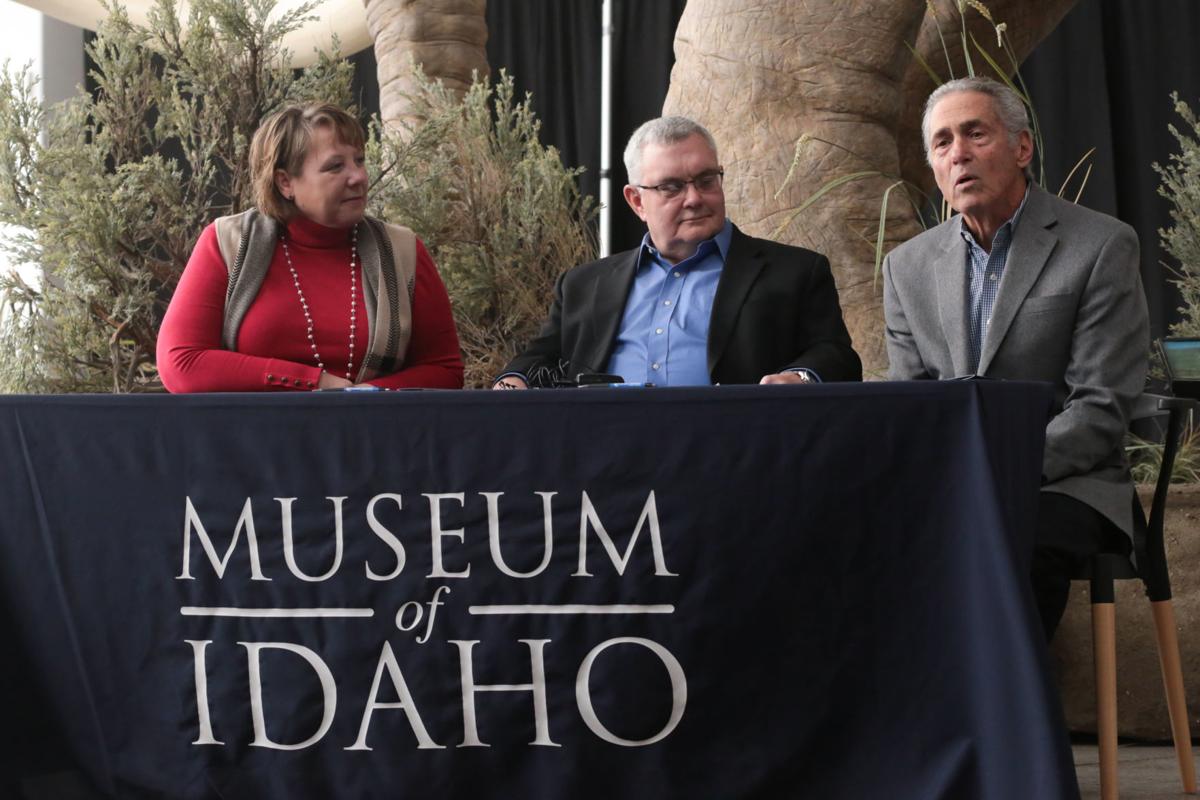 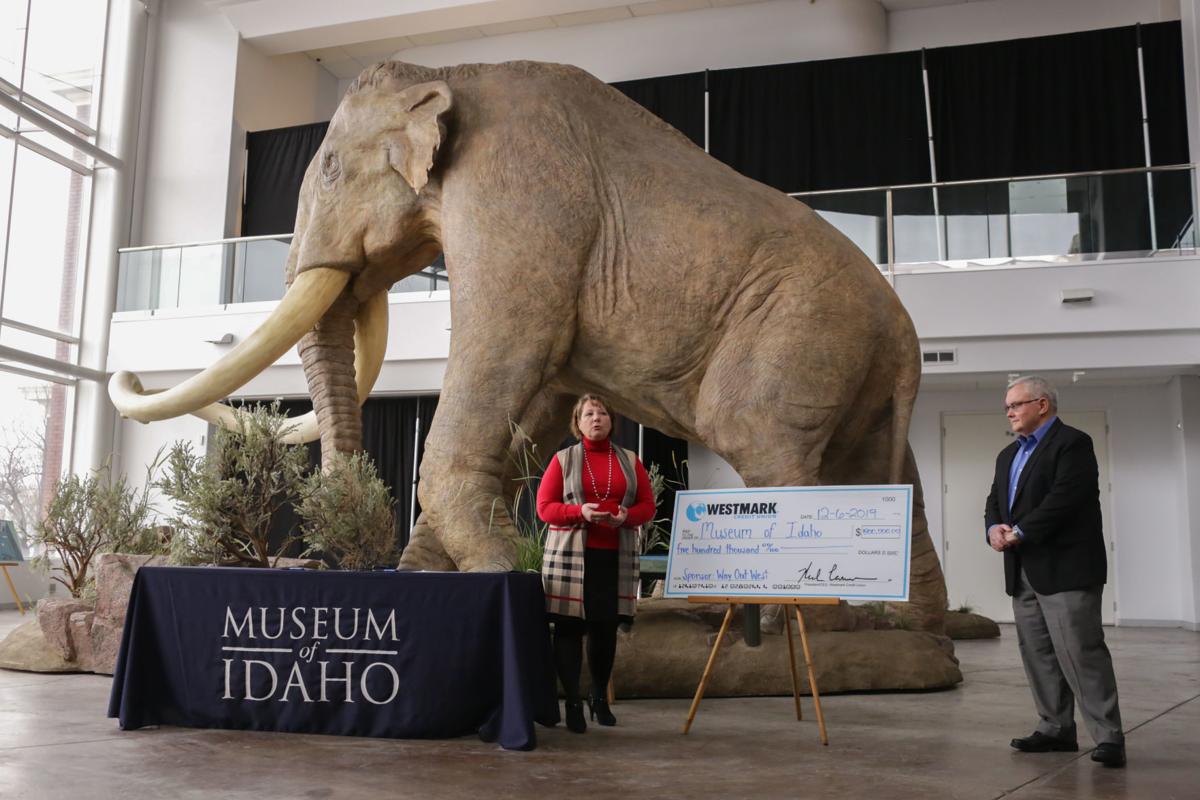 Museum of Idaho Executive Director Karen Baker speaks to the press after receiving a $500,000 donation from Westmark Credit Union’s President and CEO Rich Leonardson at the Museum of Idaho on Friday in Idaho Falls.

Museum of Idaho Executive Director Karen Baker speaks to the press after receiving a $500,000 donation from Westmark Credit Union President and CEO Rich Leonardson at the Museum of Idaho on Friday in Idaho Falls.

Museum of Idaho Executive Director Karen Baker speaks to the press after receiving a $500,000 donation from Westmark Credit Union’s President and CEO Rich Leonardson at the Museum of Idaho on Friday in Idaho Falls.

Westmark Credit Union has given the Museum of Idaho $500,000 to help pay for an exhibit that, when it opens in about a year, will tell the story of thousands of years of eastern Idaho history.

The Way Out West exhibit, which is expected to open in late 2020, will take up much of two floors of the museum, which has been undergoing a major expansion that will help to accommodate this new permanent exhibit. It will start with the prehistory of the region and the now-extinct animals such as mammoths, camels and giant bison that used to live here and continue into telling the stories of the East Snake Plain Aquifer and other unique aspects of the region's environment and geology, the Shoshone-Bannock people, the Europeans who settled this area, the founding of Idaho Falls and the industries that sustained the region and much more.

"We've got a region that has some fantastic social, cultural and environmental history that has sometimes gone unappreciated even within our own state," said museum spokesman Jeff Carr.

Westmark President and CEO Rich Leonardson came to the museum Friday morning and handed a ceremonial big check to museum Executive Director Karen Baker after a brief press conference in front of Bia-Dekape, the museum's 14-foot-tall replica mammoth. (The name means "Big Meal" in the Shoshoni language.) Leonardson noted his credit union's deep ties to the region — it was founded by Idaho National Laboratory employees in the 1950s and today 50,000 of its 65,000 members live in eastern Idaho. The credit union has been giving money to the museum for the past 15 years.

"Giving back is important to us, and we are truly honored to be presenting long-term sponsor to Way out West," Leonardson said.

The exhibit will focus on the entire area that is part of the East Snake Plain Aquifer. Baker said the exhibit would seek to tell the story of the area's ruggedness, how difficult it was to settle and the migrations that have shaped the region, and would not shy away from difficult aspects of the region's history. For example, there will be exhibits on the Japanese internment camp during World War II that was located in Jerome County and on some of the conflicts between different immigrant groups who came here and how they shaped the region today, said Chloe Doucette, the museum's director of education.

Baker said half of the museum's visitors come from outside the region, many of them tourists passing through on their way to Yellowstone or other regional destinations.

"Our mission as a museum is to bring the world to Idaho and Idaho to the world. ... We want to be that special launching point that people can learn more about Idaho," Baker said.

The exhibit will take up several rooms on two floors of the newly renovated museum, and Carr said it will try to appeal to people with different learning styles — for example, some people learn more easily by reading, while out want to look at screens or want a more interactive experience. Doucette said the exhibit would seek to tell the stories of people from all different backgrounds as well as about the region's environment and how it has shaped human life here. Doucette agreed with Carr that the story of the region's history hasn't always been well told, and she said helping to put "Way Out West" together has been a learning experience for her as well.

"I grew up in Idaho Falls and I did not know much about the history here or in the region, even though I'm a person who's interested in history," she said.

One of the highlights of the first floor will be some of the thousands of prehistoric remains that were dug from the Wasden site, a series of caves in the desert west of Idaho Falls. The museum acquired them from Idaho State University last year. There will also be displays on prehistoric animals such as mammoths and sloths, and on the region's geology and the important role the aquifer has played in its history. There will be another room telling the stories of some of the early industries that helped sustain the first European settlers here, and telling the stories of people such as Rebecca Mitchell, a temperance activist who established Idaho Falls' first school and also raised money to build the first Baptist Church here.

The exhibit will include some displays on Idaho National Laboratory and on figures such as Joe Marshall, the so-called "Idaho Potato King" who played a key role in establishing the state's potato industry. The Eagle Rock USA exhibit, an existing and already popular exhibit telling the story of Idaho Falls' early history, will be incorporated into "Way Out West" without major changes.

The museum also is working closely with the Shoshone-Bannock Tribes on an exhibit on their history that will focus on the period from contact with the first European explorers in the early 19th century to the 1920s. Carr said they wanted to make sure the exhibit consisted of the tribes telling their story, not someone else telling it for them. The exhibit will include interactive displays on the Shoshoni and Bannock languages, which are endangered.

"It is a wonderful opportunity for us to co-curate the gallery," said museum Curator Carrie Anderson Athay.

Museum of Idaho evolves into new exhibit hall and renovations

The public will get their first look at the renovated Museum of Idaho this weekend, as a display on dinosaurs and natural selection debuts in …