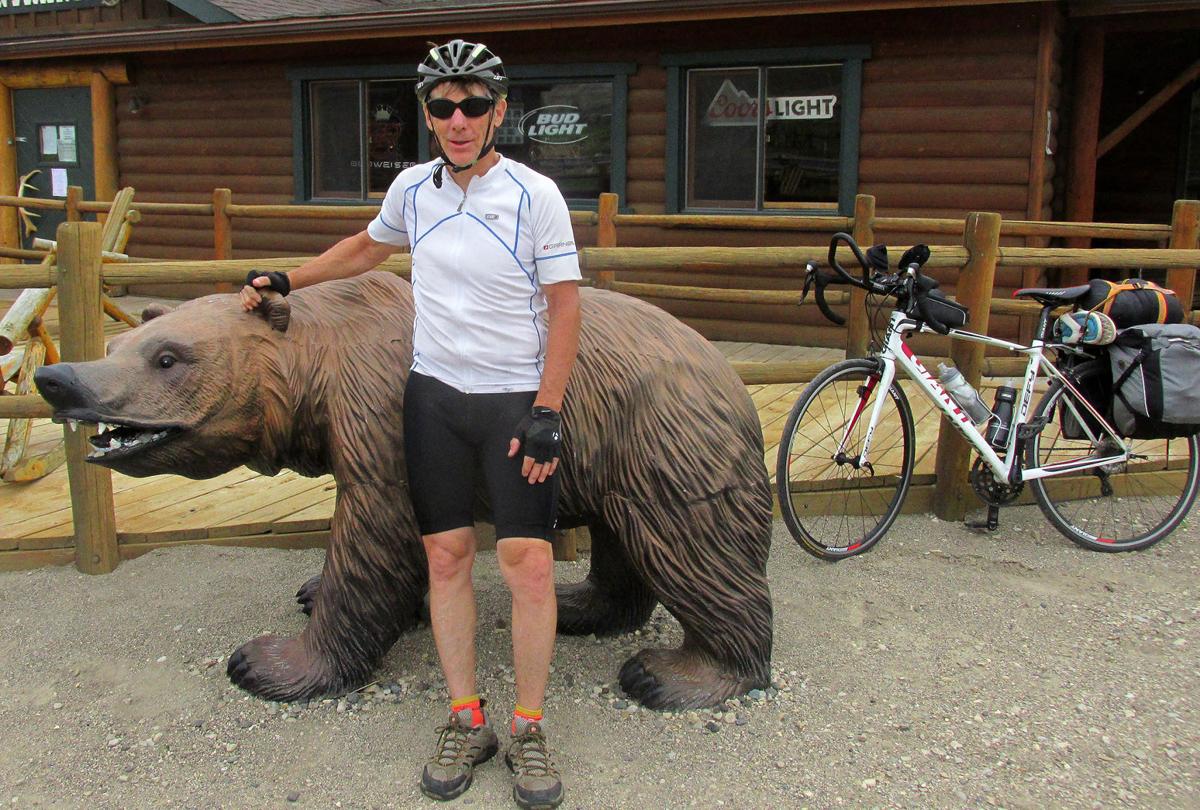 Jerry Painter poses next to one of the locals near Wapiti, Wyo., on day two of a week-long bike tour in western Wyoming. 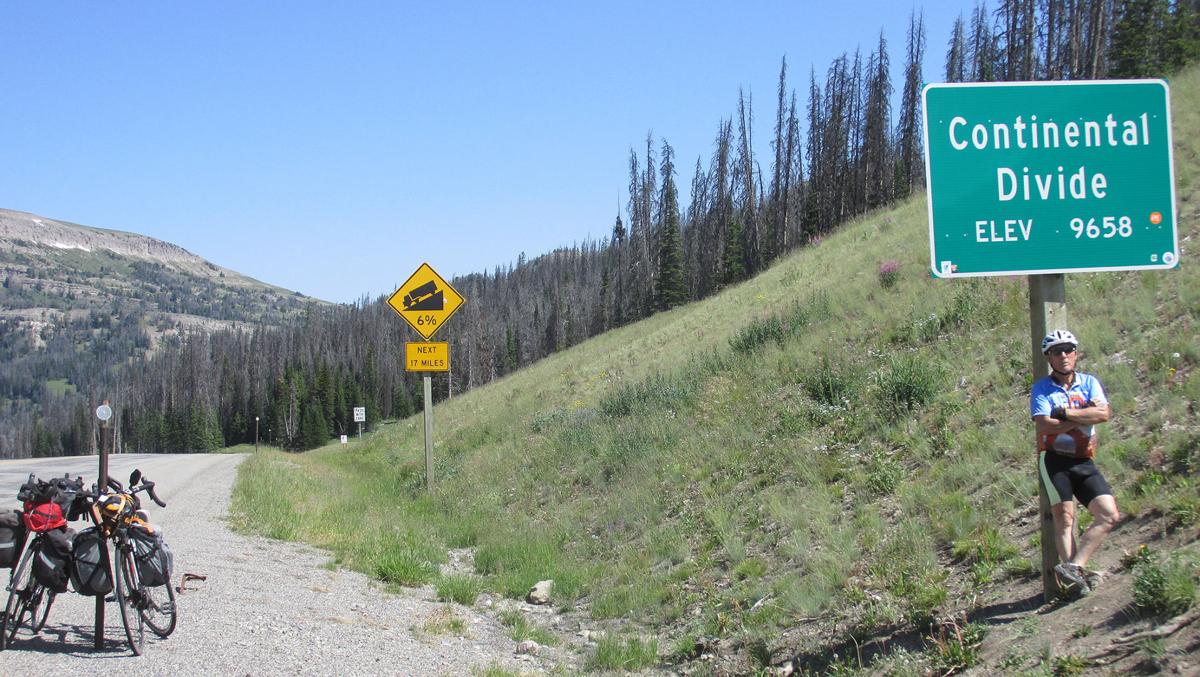 Tim Painter poses next to the Continental Divide sign near Togwotee Pass on the sixth day of a tour bike ride through western Wyoming. The cyclists were most excited about the sign in the background promising easy riding. 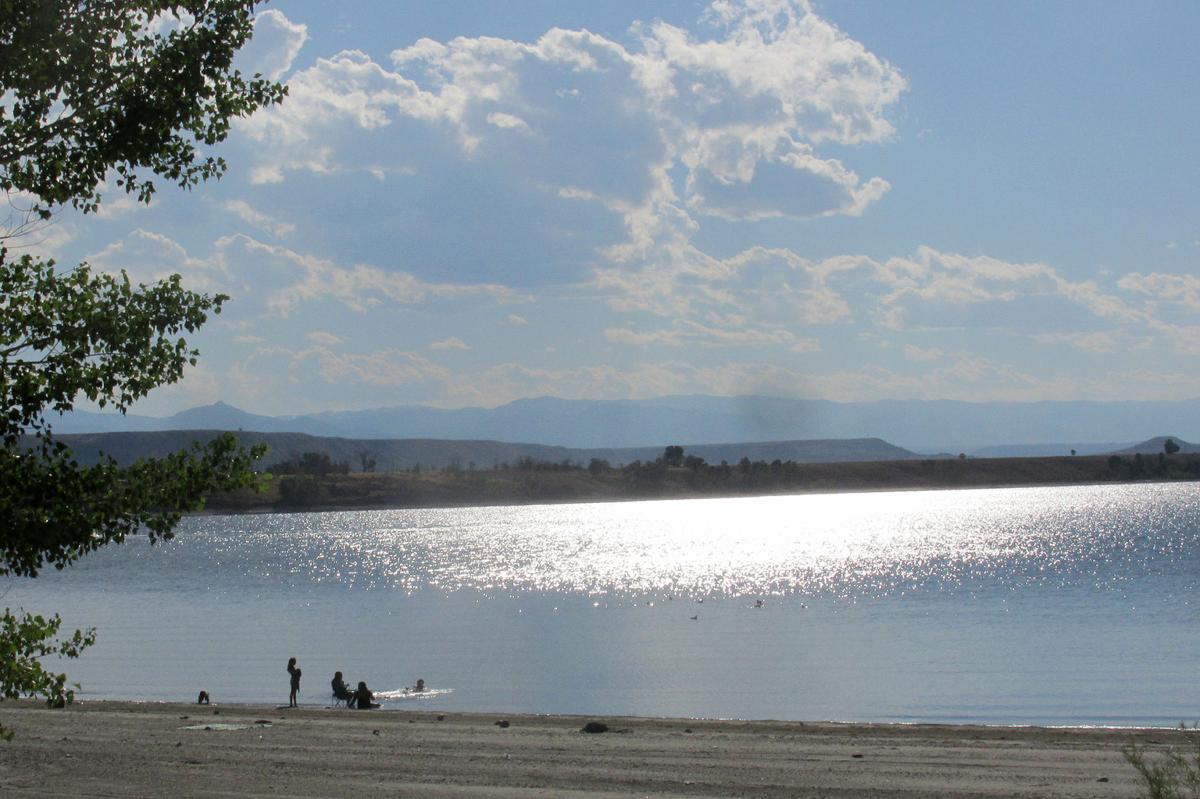 A family enjoys splashing in the water at Pilot Butte Reservoir west of Shoshoni, Wyo. The site also offers free camping and picnicking. 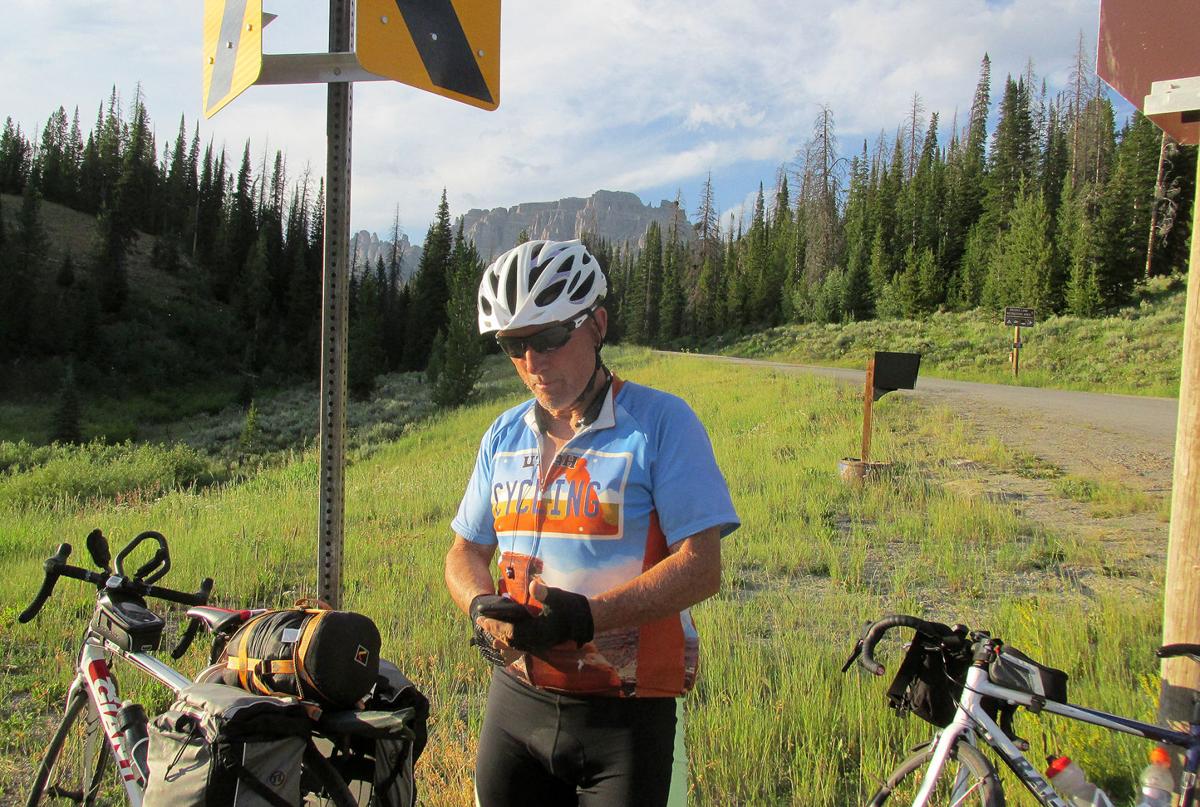 Tim Painter pauses to catch his breath after riding uphill for 20 miles to near Togwotee Pass northwest of Dubois, Wyo.

Jerry Painter poses next to one of the locals near Wapiti, Wyo., on day two of a week-long bike tour in western Wyoming.

Tim Painter poses next to the Continental Divide sign near Togwotee Pass on the sixth day of a tour bike ride through western Wyoming. The cyclists were most excited about the sign in the background promising easy riding.

A family enjoys splashing in the water at Pilot Butte Reservoir west of Shoshoni, Wyo. The site also offers free camping and picnicking.

Tim Painter pauses to catch his breath after riding uphill for 20 miles to near Togwotee Pass northwest of Dubois, Wyo.

About 50 miles into a week-long, 400-mile bicycle ride with my brother last week my right pedal fell off.

My brother Tim and I were riding over Sylvan Pass in Yellowstone National Park when the disaster struck. I looked at the pedal and the crank and wondered if our trip was over before it had hardly begun. The threads were mostly stripped.

“That’s a problem,” Tim said in his typically understated manner.

For the past few months, Tim and I had been planning what is becoming an annual summer event. We pick a week-long ride somewhere we’ve never been and ride and camp out. Last year we rode through British Columbia. We wanted to return to Canada for B.C. Part Deux, but some silly killer pandemic nixed those dreams. Our second choice was an Oregon Coast/Cascades trip, but that pandemic thing shot us down again with all the coast biker campgrounds being closed.

So, I nominated western Wyoming starting in Yellowstone. As many times as I’ve been to Yellowstone, I’d never been on the road to the East Entrance and beyond. We would be starting at Canyon Village in the center of the park. Originally, I wanted to start in West Yellowstone, Mont., but the first campgrounds allowing tents on the far east side of the park were more than 100 miles away.

At the top of Sylvan Pass, I got out my wrench and tightened back on the pedal. Enough threads held to keep it attached. Fortunately, it was mostly downhill from the pass all the way to our first campsite near Wapiti, Wyo. The next day we rode 20 miles into Cody, Wyo., with a bit of downhill, a tailwind, cool temperatures and beautiful scenery. It was bliss.

Our first stop was the bike shop in Cody.

“Leave your bike here for a couple of hours, and we’ll see what we can do,” the bike mechanic said. Sadly, he wasn’t holding out much hope. He didn’t have any replacement parts or the means to repair the crank arm giving up the ghost.

Cody, a town of more than 9,000 people, surprised me with all the tourist action going on. Tim and I went walking. I wanted a good taco. Tim wanted to see if Kanye West was in town.

Two hours later back at the bike shop the news was bad. My pedal was lying on the floor next to my bike like a stubborn child refusing to move. The mechanics were shaking their heads. The mechanic twisted the pedal back on. “I think a few threads are catching,” he said.

Before leaving town we stopped at a hardware store and bought some cement glue. I pedaled on a slightly crooked pedal for the next 30 miles to the town of Meeteetse, Wyo. (population 330 – no grocery store or bike shops). The landscape was turning to rolling sagebrush desert. We had to talk our way into a campsite at the only RV park.

“We’re not allowing any tent camping because of COVID,” a lady told us politely. “We can’t clean the restroom.”

We put on our best hard luck faces and promised not to use the restroom.

“Well there is a Porta Potty over there left behind from a recent event you could use,” she said. “But we’re not allowing tent camping. That will be $20.”

We gave her $20 and went off to the back corner of the property and pretended not to set up our tent. Before we went to sleep, I smeared the cement glue on my pedal’s threads and wrenched it back in place. The tube said after 8 hours it would hold 2,500 pounds. In the morning, the pedal was locked in place forever, albeit slightly askew.

From Meeteetse, we rode to Thermopolis. One odd thing along the way was a pronghorn antelope that seemed to want to race us. It ran alongside the highway easily distancing us on our loaded bikes, then it would pause and stare until we caught up. Then run ahead again. After a quarter of a mile of the game, it decided we were no competition and walked to a hilltop to watch us pass.

Thermopolis is home to Hot Springs State Park — developed warm swimming pools, hot pools, hot streams — but since the temperatures were climbing into the mid-80s, hot water wasn’t getting us excited.

The next 20 miles of riding after Thermopolis were a pleasant surprise. Our route followed Highway 20 along the Wind River. We entered the impressive Wind River canyon — a narrow slice several hundred feet deep into ancient sandstone. At one point, the road passes through three tunnels. Our destination was a campground at Boysen State Park. Our big surprise here was hundreds of bats swirling overhead at night.

From there we rode to the tiny crossroads town of Shoshoni, Wyo. (population 649). At the gas station/grocery store/deli/pizza/postcards shop we picked up a delicious custom sub sandwich made by Becky. “I’ve lived here all my life,” the woman who looked to be in her 50s said. “I love it here.” You could tell she was grinning behind her face mask.

From Shoshoni, we took a shortcut due west on the minor Highway 134. We spent the night in a free site at Pilot Butte Reservoir. The temperatures were climbing, and we jumped in the water.

From there, we rode to Dubois, Wyo. (population 968 – “Home of the world’s largest jackalope”), to refuel and hide in the shade. This proved to be our toughest day: 83 miles, mostly uphill and hot temperatures. We tried not to think of the 2,700 feet of climbing from Dubois to Togwotee Pass. After napping at the city park to avoid the midday heat, we rode uphill toward Togwotee Pass. We stopped about 7 miles short of the pass at Falls Campground where we snagged the last available site.

The last morning of the ride we acted like tourists, stopping to take selfies with the Continental Divide sign near the pass. Although we had been promised a downhill ride all the way to Jackson, Wyo., from the top of the pass, we learned you can’t trust automobile drivers. Our last day riding into Jackson through Grand Teton National Park totaled about 81 miles, most of it pedaling. The best part was the 20 miles of separated bike path.

We were picked up by my wife Julie, the one who dropped us off.

Now I need to get my bike repaired. My son wants to do a September 4-day bike trip across central Idaho.

Nights sleeping on the ground: 5

Weight of stuff on bikes: 25 to 30 pounds, depending on groceries

Number of flats: 2 (both were Tim’s back tire)

Cellphone coverage: Only a few hours per day, sometimes

Number of other tour bikers seen: 2 — a woman near Dubois and a guy outside of Moran Junction.