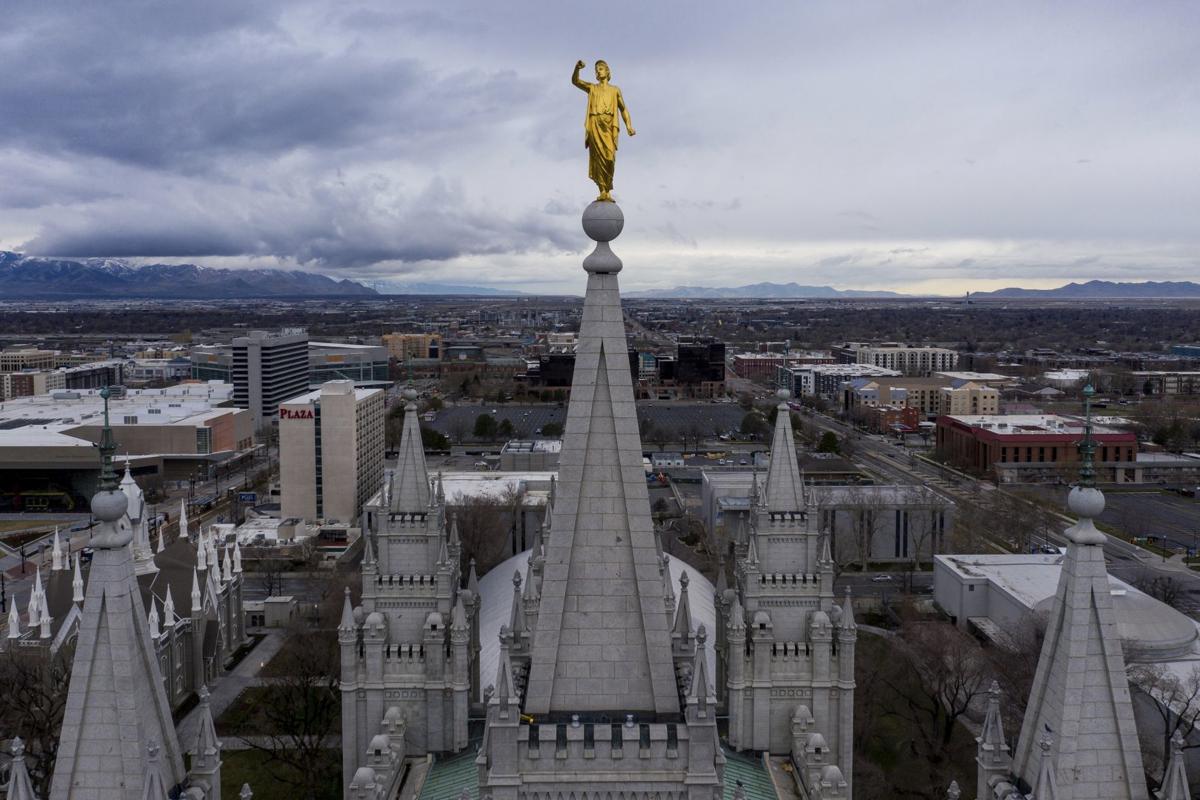 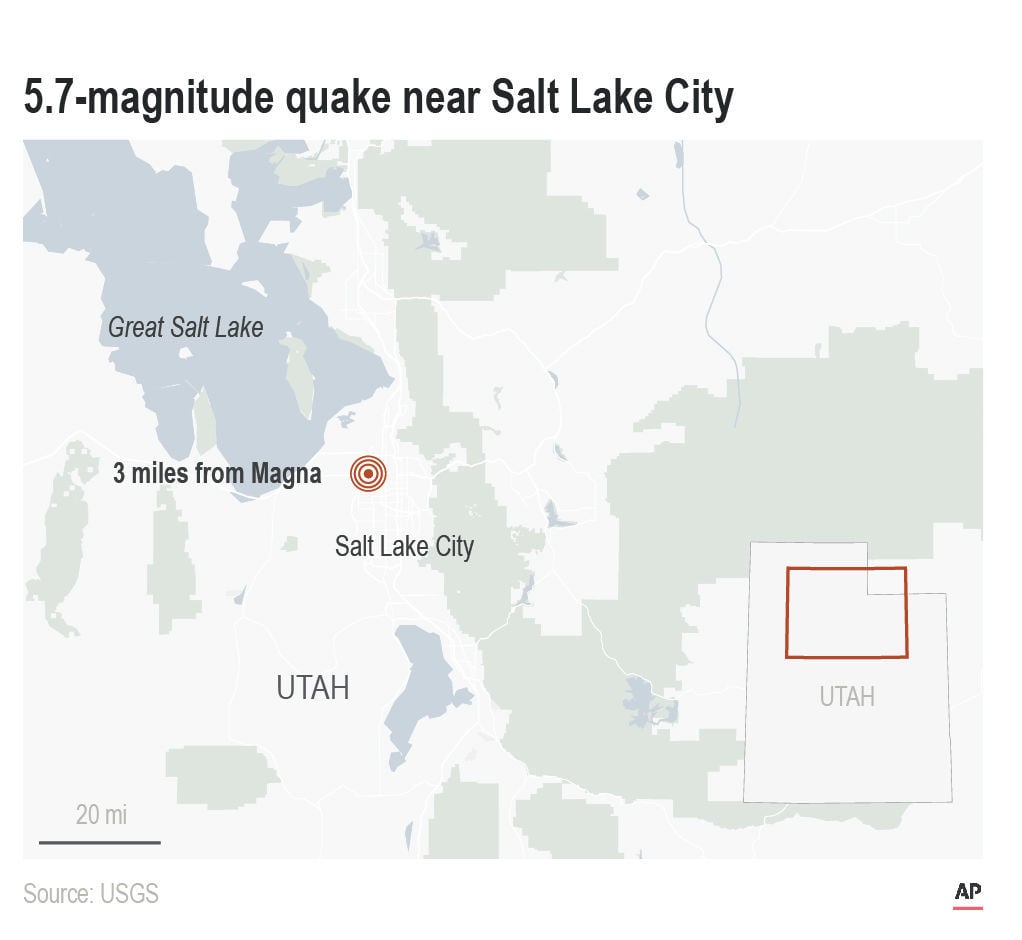 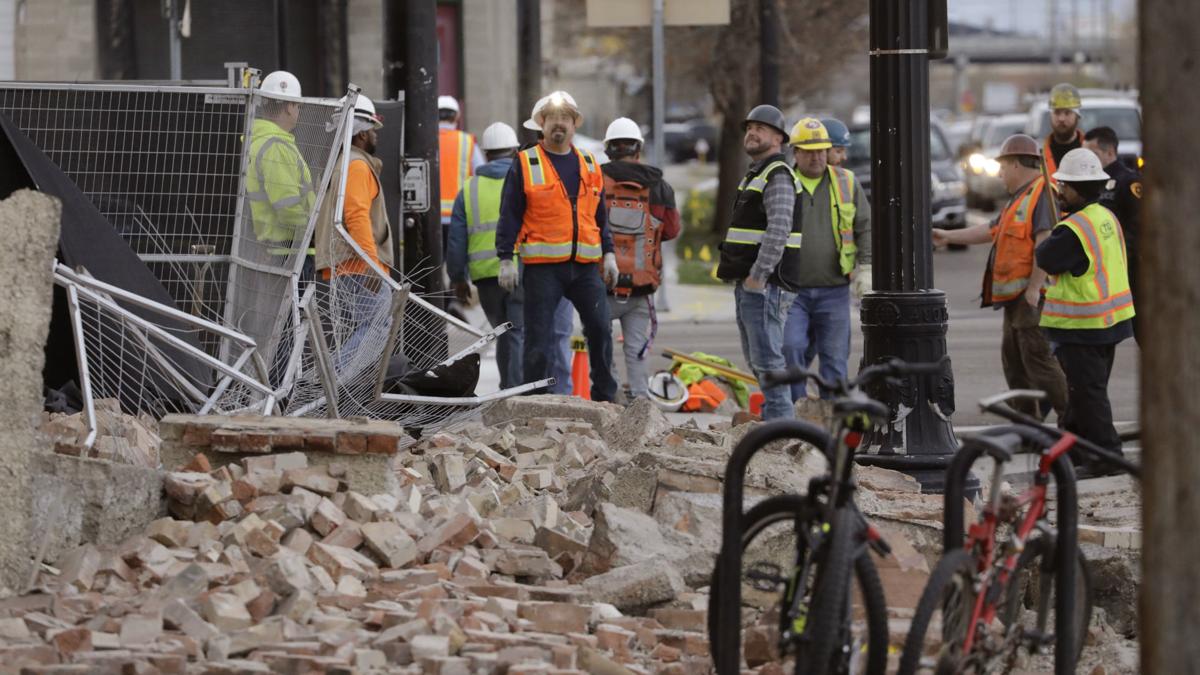 Construction workers looks at the rubble from a building after an earthquake Wednesday, March 18, 2020, in Salt Lake City. A 5.7-magnitude earthquake has shaken the city and many of its suburbs. The quake sent panicked residents running to the streets, knocked out power to tens of thousands of homes and closed the city’s airport and its light rail system.

The epicenter of the 5.7-magnitude quake was just southwest of Salt Lake City, between the airport and the Great Salt Lake. The temblor and its aftershocks physically and mentally rattled approximately 2.8 million people who are already hunkered down amid the coronavirus epidemic.

“This is extremely bad timing, because we already have the coronavirus issue going on right now causing a lot of anxiety,” Gov. Gary Herbert said.

There were no reports of injuries in the hours immediately after the 7:09 a.m. quake, Utah Emergency Management spokesman Joe Dougherty said.

Operations at Salt Lake City International Airport came to a halt and the control tower and concourses were evacuated. Planes headed to Salt Lake City were diverted while officials conducted a runway inspection. Police blocked the road to the airport, allowing in only those who were picking up passengers.

Far fewer people than normal were in the airport because of mass cancellations caused by the coronavirus outbreak. On a typical travel day, the airport would have had about 24,000 people inside it and more making connections. But there were just 9,000 there, said the airport’s executive director, Bill Wyatt, making an evacuation of the terminal easier.

No runway damage was found following the inspection and most of the damage in the terminal appeared to be caused by a broken water line. Wyatt said he expected the airport to reopen in “hours not days.”

The quake also shut down the light rail service for Salt Lake City and its suburbs.

Some residents ran from their homes and into the streets as they felt the earthquake shake buildings for 10 to 15 seconds.

Michelle Daneri, 30, said the coronavirus outbreak had kept her mostly inside her Salt Lake City home since last Friday, but she emerged from it after the quake to search for her frightened cat. She chatted with her neighbors outside but stood apart from them.

“We’re trying to check on each other but we’re also trying to keep our distance,” Daneri said. “I think we at least stood about 5 feet away from each other.”

The experience made her wonder how to take precautions against the virus if she could not stay in her home.

“It makes me feel a little bit on edge in my house, when that felt like a safe space,” Daneri said.

There were some reports of damage in Salt Lake City and in the communities of Magna and Kearns, but authorities said they did not expect it to be severe. Fire officials in Magna said 14 structures were damaged.

In Salt Lake City, bricks fell off the side of a homeless shelter and the Salt Lake Temple sustained minor damage, with the trumpet falling from the Angel Moroni statue at the top of the temple and stones displaced from a spire.

The temple is undergoing renovations and a seismic upgrade. Construction crews were sent home while the damage is being assessed, church spokesman Daniel Woodruff said in a statement.

But authorities did not expect to find severe damage in most structures, said Dougherty, the emergency management spokesman.

People reported feeling the quake in the neighboring states of Colorado, Idaho, Wyoming and Nevada.

About 73,000 homes and businesses lost electricity in the Salt Lake City area, but power was quickly being restored in some areas, said utility Rocky Mountain Power.

It was the largest earthquake to hit Utah since a 5.9 magnitude quake shook southern Utah in 1992, according to Utah Emergency Management.

At least 21 aftershocks were recorded in the hours after the initial quake struck.

Dougherty recommended that people check on their neighbors, but that advice that could be challenging when people are being told to say inside their homes to help prevent the spread of the coronavirus.

“This is the time for people to really do the right thing, make sure everyone is taken care of,” Dougherty said. “But we still do need to remember we have a pandemic going on at the same time.”

After a Wednesday morning earthquake in Utah temporarily shut down the Salt Lake City International Airport, Idaho Falls was among the cities …