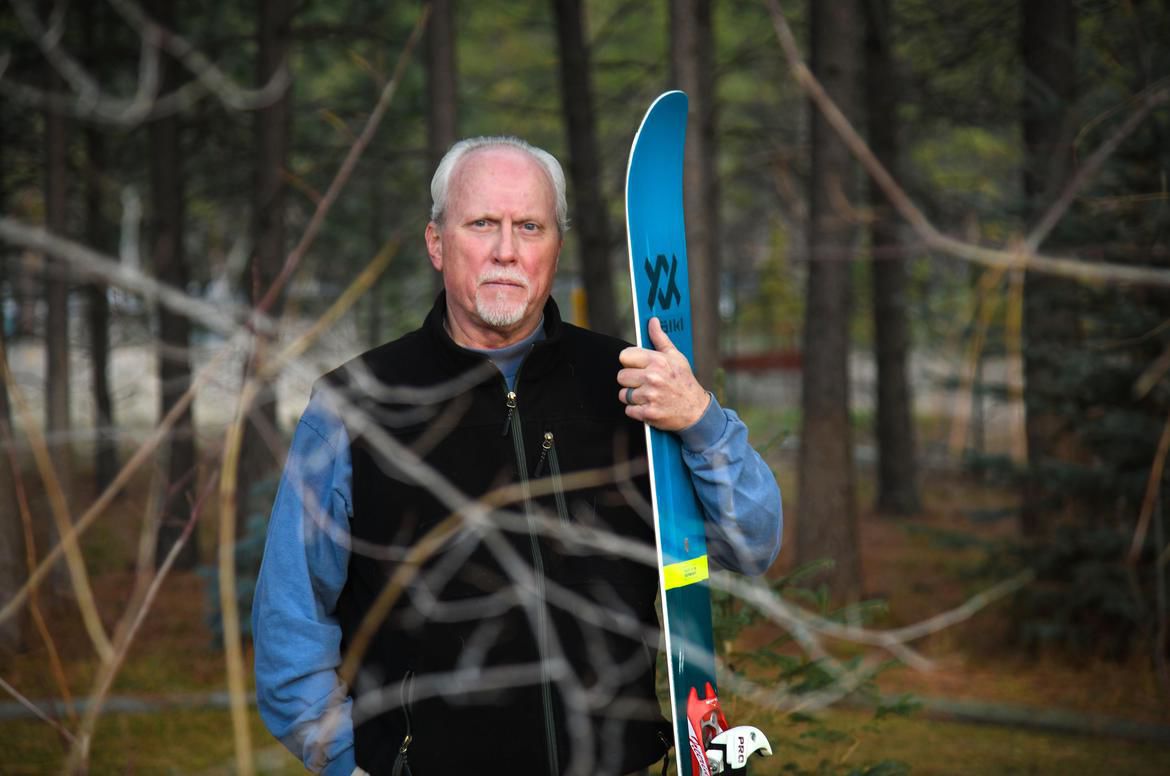 Bill Fuzak was buried twice in the Silver Mountain avalanche Tuesday before his rescue by the Ski Patrol. Here he is at home on Wednesday with only one recovered ski. 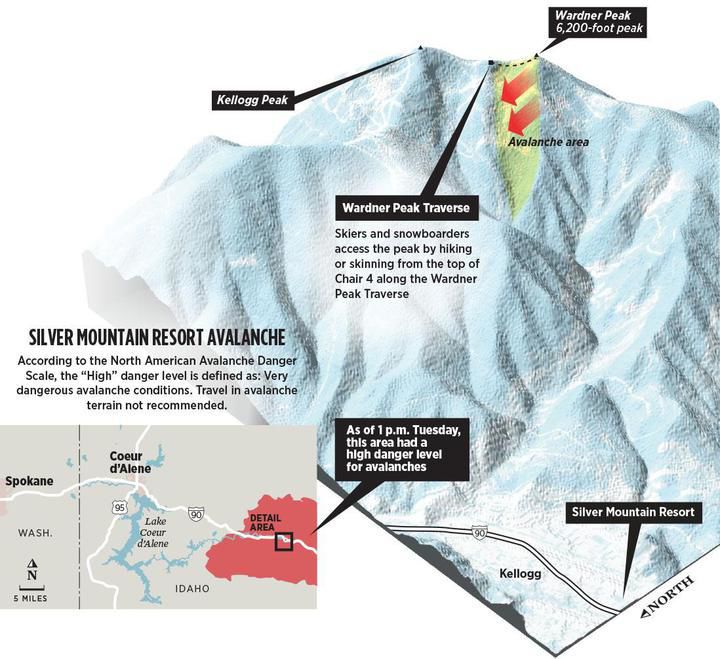 Bill Fuzak was buried twice in the Silver Mountain avalanche Tuesday before his rescue by the Ski Patrol. Here he is at home on Wednesday with only one recovered ski.

When the avalanche first caught Bill Fuzak, he fought to stay on top of the roiling mass. First by trying to kick off his skis. Then by using his arms to try and “swim” to the top — or at least near the top — of the rapidly accelerating mass.

Within seconds, he’d rocketed down the steep slope on Silver Mountain’s Wardner Peak on Tuesday, along with some seven other skiers caught in the inbound avalanche.

The ride was quick and brutal. His left ski was gone, while his right remained locked to his foot.

“It slows and it envelopes me,” Fuzak recalled Wednesday. “My ski gets sucked down and I’m underneath the snow. Everything stops and it’s quiet.”

Twenty years ago, Fuzak took an avalanche class. He learned then that if you are caught in a slide to try and clear snow from your face, making an air pocket so you don’t asphyxiate. He did this and also punched upward with his right hand in a bid for the sky.

His gloved hand broke through.

He had air. His hand was above the snow, which would make it easier for rescuers to find him.

And then, he heard a whumph, a terrifying sound for an experienced winter recreationist like Fuzak. Somewhere above him, a slab of snow settled and a second avalanche ripped down, burying him under roughly 10 feet of snow.

And then, like a “freight train,” it came to a screeching stop.

Fuzak, 62, who has been skiing for 50 years, had no illusions about the situation. He knew his best bet was to stay calm, but the odds looked long. He thought about his family and how much they would miss him. He was overwhelmed by sadness, so instead he focused on staying calm.

“The more frantic I get, the sooner I’m going to die,” he said.

He slowed his breathing. He wasn’t in pain. He knew there was nothing he could do.

“That’s the last thing I remember,” he said.

The day started like many do for Fuzak: He drove his youngest son to school at Mt. Spokane High School in Spokane, Wash. Since retiring in 2014 from his job as a distribution manager for The Spokesman-Review, it’s a ritual Fuzak more-or-less adheres to.

A chance to connect and focus on his kid.

But on Tuesday it was no doubt a little harder to stay focused. That’s because Idaho’s Silver Mountain had gotten 17 inches of new snow in the past 24 hours. After a slow start to winter, this was the dump powder hounds like Fuzak lusted after.

He dropped his son off. From the front door of his home in Colbert, Wash., it’s an hour-and-fifty minutes to the top of Silver Mountain.

By 10 a.m. he was on the mountain skiing “beautiful powder.” He was being careful, staying far from the base of trees, which on heavy snow days can trap skiers and snowboarders if they get too close. He did two runs and then headed up on Chair 4, the lift that gets skiers and boarders closest to Wardner Peak.

The 6,200-foot peak is a unique feature. Although it’s not accessed by a chairlift, the ski patrol does manage it. Riders take Chair 4 to its terminus and then traverse a ridge. From there, they can continue up to the top of Wardner Peak or ski along its flank and drop into a number of harder, steeper runs.

The peak is known for having steep descents and good powder.

“The reason we go there is because it’s challenging,” Fuzak said. “Because you do get kind of scared sometimes.”

Fuzak, along with some other friends from Spokane, rode up Chair 4. Near the top, they saw that Wardner had just been opened. Ski patrollers had been bombing the slopes all morning trying to trigger avalanches, Fuzak said. For Fuzak, who has skied Wardner for 40 years, everything looked normal.

“It didn’t look like they were getting reactions off stuff,” he said.

After checking with a ski patroller, Fuzak said about a dozen skiers and snowboarders started to pack a trail through the fresh powder. There were two guys in front of Fuzak. But as they made their way forward, he let Carl Humphreys go ahead of him.

“He was a stronger hiker than me,” he said.

While some of the skiers and snowboarders dropped off, Humphreys, Fuzak and a few others continued ahead to the run 16-to-1. From the side of the mountain, Fuzak watched as the guys ahead of him dropped into the run.

Humphreys went and then Fuzak started to ski down, trending toward skier’s right.

Within two turns, the snow started to fracture and break. A woman who was skiing behind Fuzak yelled to him, “It’s breaking up. Try to stay on top.”

“I look down and everything is moving,” he said.

Snow can be benevolent. It cushions falls, dampens the noises of the world and turns even the weariest city park into a winter wilderness.

But that same soft, powdery white stuff can also be a powerful and dangerous force. In general terms, an avalanche starts when one layer of snow slides off another. The snow gains momentum turning into a rollicking wave. In extreme cases, it can reach speeds of 100 mph, rip trees from the ground, carry boulders thousands of feet and destroy buildings.

All of which is, of course, dangerous.

But most avalanche deaths happen when the slide stops and the once fluid substance compacts under its own weight, taking on the consistency of wet cement.

People are trapped and, most often, suffocate. Rescuers are faced with the task of digging through the snow. Each extra minute they take to get to the victim can mean the difference between life and death. Most avalanche survivors are dug out within 15 to 30 minutes, according to the U.S. Forest Service. For victims buried longer than 30 minutes, chances of survival are 30 percent, according to data from Elsevier, an information-analytics business.

Devices like beacons, which help rescuers locate where the buried victim is, save time and lives.

But most people who ski in a resort don’t wear beacons.

‘Am I dreaming? Am I really alive’

Despite these sobering realities — and despite being buried for 50 minutes — Fuzak survived.

Maya Pardue, a ski patroller at Silver Mountain, found him with her probe and rescuers uncovered his face.

When Fuzak regained consciousness, he saw Pardue, who he knows from Mt. Spokane.

“She just smiled and she said, ‘You’re OK,’ ” he said “And she went off to go find other people.”

Fuzak was shivering and shocked but otherwise unharmed. Meanwhile, another man buried near Fuzak was also uncovered. As rescuers uncovered him, he started yelling, happy to be alive.

Fuzak, for his part, was quiet.

“I wasn’t sure what was really happening. Am I dreaming? Am I really alive?” he recalls thinking.

Roughly 50 rescuers, a combination of ski patrollers and passersby, were searching the area.

By the end of the day two skiers — including Carl Humphreys, the man Fuzak had let pass him on the trail — were dead. On Wednesday morning, the resort announced a third person was still missing. As of Wednesday night, the third person had not been found.

Although it’s hard to know exactly why he survived for so long, Fuzak guesses it had to do with the fact that he’d already cleared some snow from his face when the second avalanche hit. Plus, the backpack he was wearing kept the full weight of the snow off.

“I was able to breathe quite easily,” he said.

After talking to a sheriff’s deputy and the ski patrol director, Fuzak drove himself home. A sore leg was the worst injury he sustained.

But the emotional trauma remains. Tuesday night, at the urging of his wife, he wrote down what happened, hoping to process the experience.

As he did, he realized how many people were “just trying to help.” And he owes his life to that, believing that if they’d taken 10 minutes longer to get to him he would be dead.

“The reason I’m here is because they were so quick and so responsive and worked so well as a team,” he said. “That’s what blew me away. The community of skiers and riders that came together to help us so quickly.”