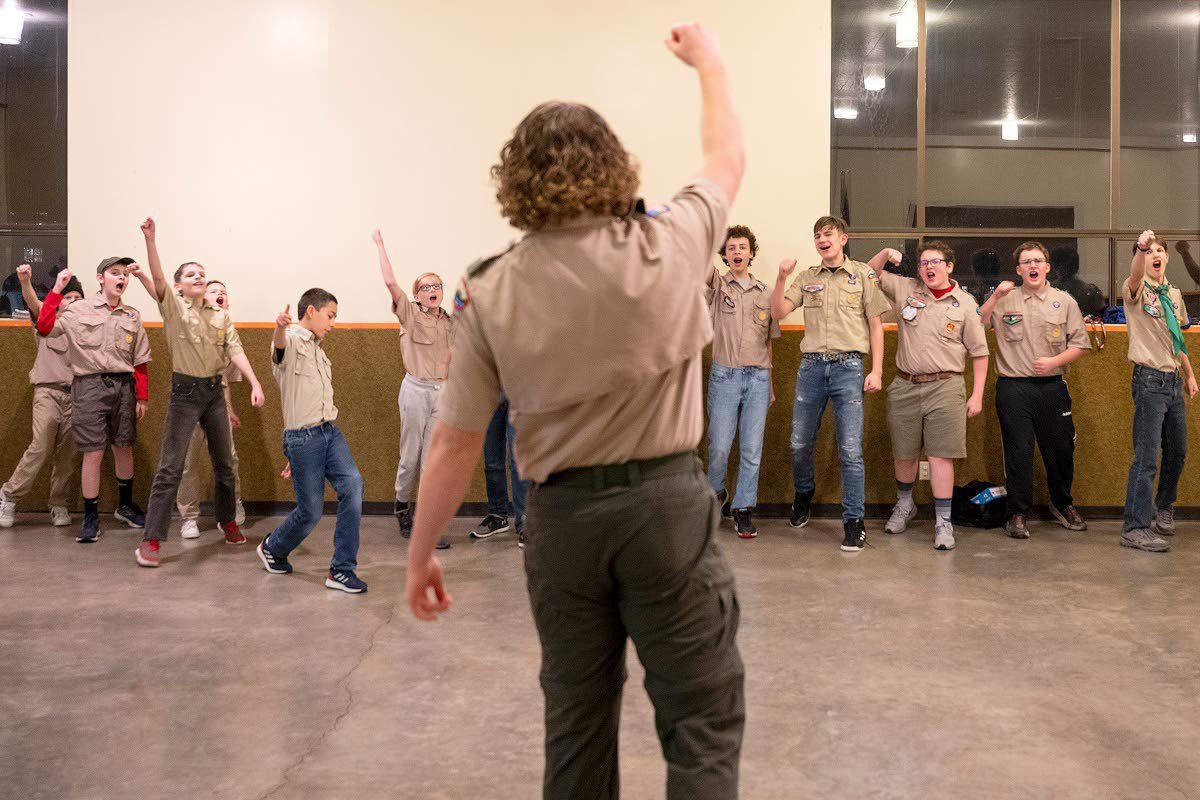 Kyle Volk, 16, leads Troop 460 and its sister Troop 560 — and all-girls Scout group — in their cheer as a weekly meeting begins Wednesday at Simpson United Methodist Church in Pullman, Wash. 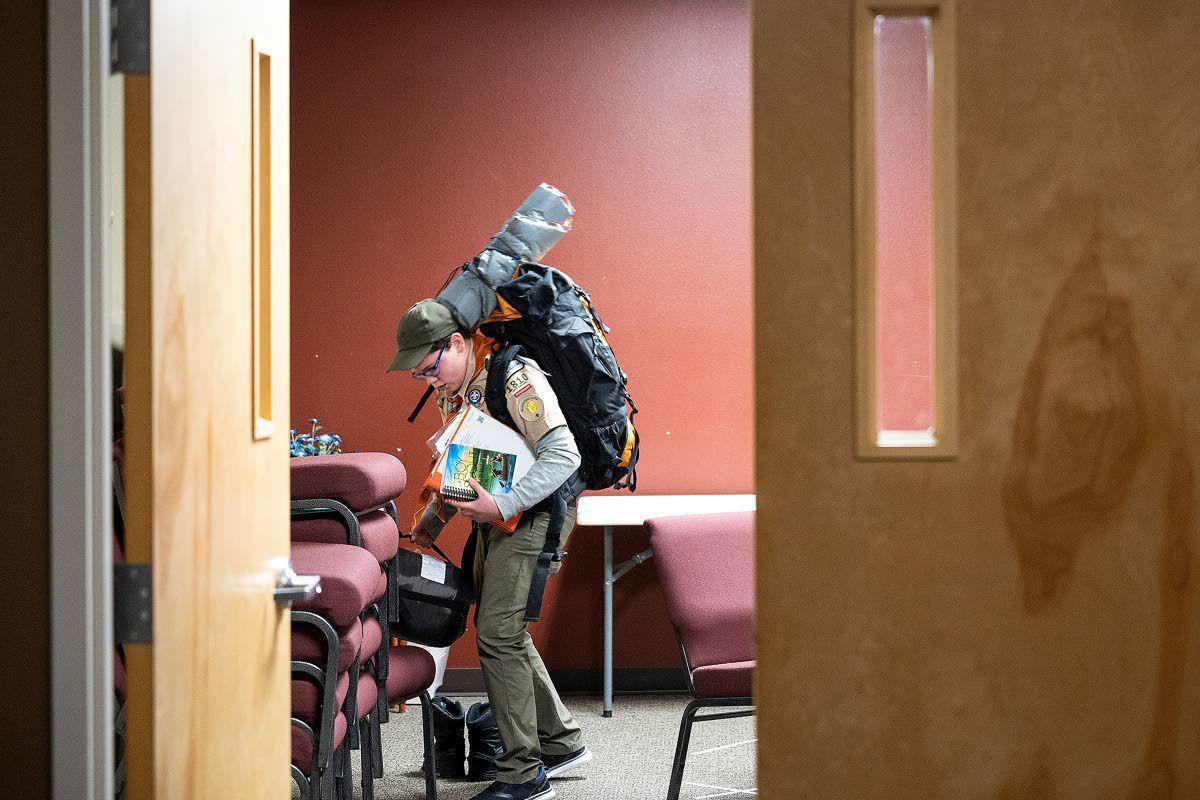 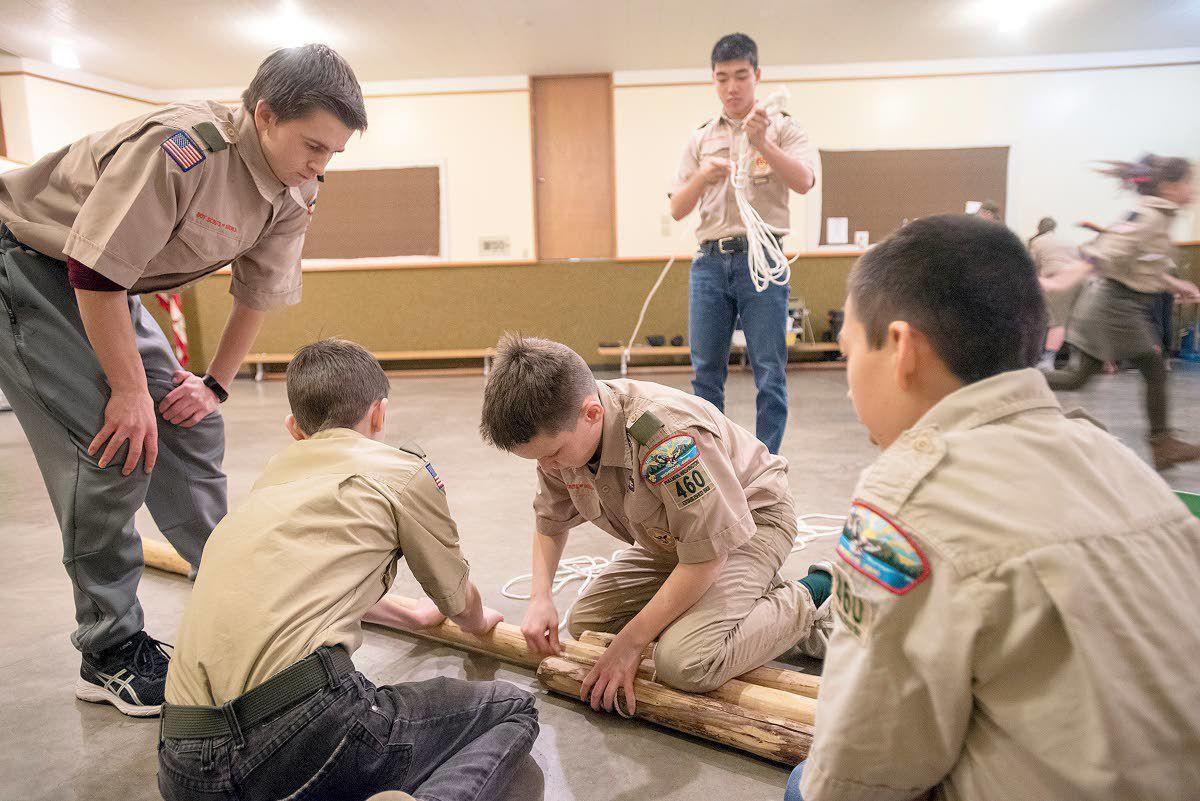 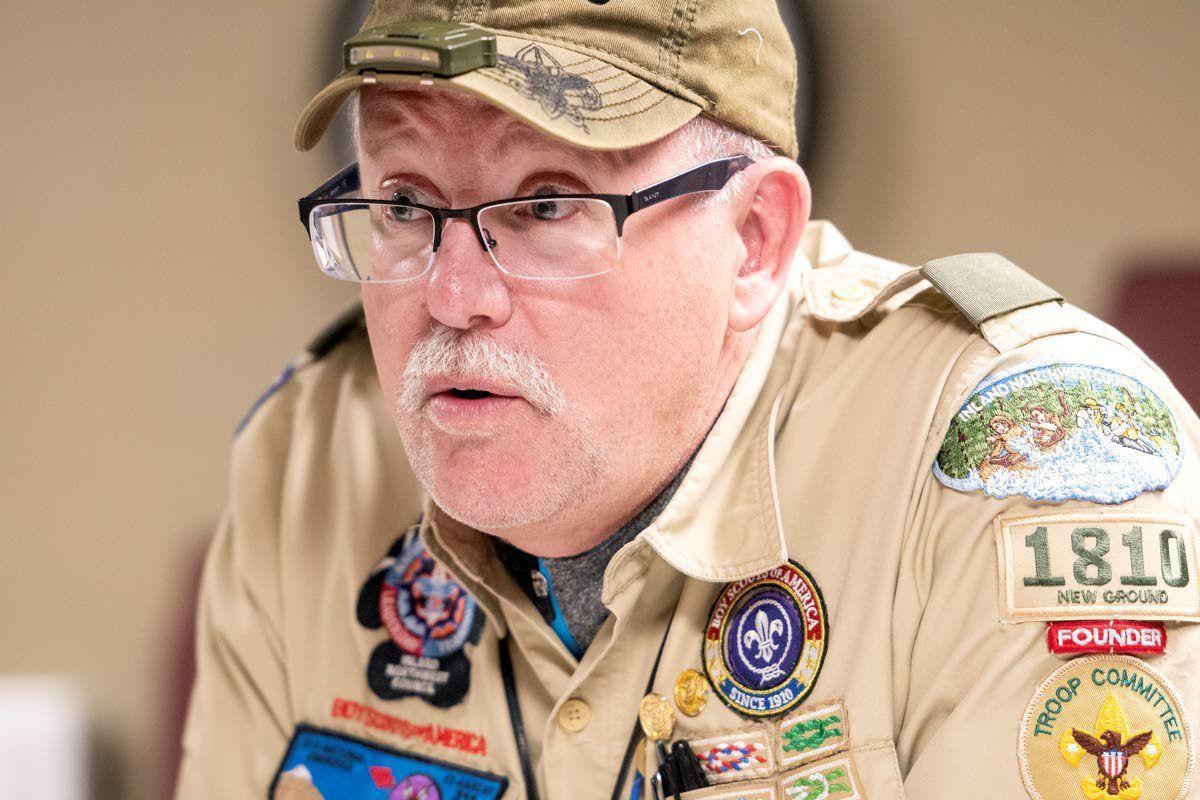 Trent Morgan, an Eagle Scout and committee chairman of Troop 1810 in Clarkston, Wash., talks to Scouts on Jan. 28. Morgan says he expects the organization to come out better on the other side of current changes, including the departure of The Church of Jesus Christ of Latter-day Saints, from the program. "I think we're going to go through a transitional time, but I think Scouting will be more true to Scouting," he said.

Kyle Volk, 16, leads Troop 460 and its sister Troop 560 — and all-girls Scout group — in their cheer as a weekly meeting begins Wednesday at Simpson United Methodist Church in Pullman, Wash.

Trent Morgan, an Eagle Scout and committee chairman of Troop 1810 in Clarkston, Wash., talks to Scouts on Jan. 28. Morgan says he expects the organization to come out better on the other side of current changes, including the departure of The Church of Jesus Christ of Latter-day Saints, from the program. "I think we're going to go through a transitional time, but I think Scouting will be more true to Scouting," he said.

LEWISTON — The recent split between the Boy Scouts of America and The Church of Jesus Christ of Latter-day Saints dealt a body blow to many of the area’s Scouting troops.

According to some estimates, Scouting membership in north-central Idaho and eastern Washington, known as the Rivers and Ridges district, dropped by about two-thirds. The loss of financial support has not yet been calculated.

“We’ve known about (the LDS church pulling out of scouting) for the last couple of years,” said Darrin Nicholson, assistant Scout executive for the Inland Northwest Council for the Boy Scouts of America at Spokane, Wash.

“There’s a lot of speculation about what they’re saying is their reason,” Nicholson said.

In May 2018, the LDS church announced it was severing its relationship of more than a century with the Boy Scouts and would design its own youth program that could be implemented in its congregations around the world. That move took effect Dec. 31.

The church said its new youth program would include both boys and girls. It previously had no scouting program for girls, whose church activities usually involved lessons in cooking, grooming, making handicrafts and learning the tenets of the faith.

The move was expected to mean about an 18 percent decrease in Boy Scout youth membership nationwide, dropping below 2 million for the first time since World War II. At its peak in the 1970s, more than 4 million boys were Scouts.

Although the church is no longer sponsoring Scout troops, Nicholson said, individual Mormon youth or adult leaders “can join a local traditional unit that already exists and is established and delivering a quality program that aligns with their faith.” The executive office is helping LDS youth and leaders who wish to remain in Scouts to find troops that meet their religious values.

“So we’re really excited and being proactive helping families that want to continue,” said Karen Meier, CEO of the Inland Northwest Council.

The exit of the LDS church has hit the Rivers and Ridges district, which includes Lewiston, Clarkston, Wash., Grangeville and Orofino, harder than the rest of the region because so many members and troops were LDS members, said Trent Morgan, an Eagle Scout and committee chairman of Troop 1810 in Clarkston sponsored by New Ground Alliance Church.

“Recruiting is an uphill battle; we’re in a competitive market,” Morgan said, noting that young people have numerous options for club and team memberships, both in and out of school.

The closure of the Scout service center in Clarkston, where Scout uniforms, books and badges could be purchased, has made it even more difficult to make connections with potential members in the Lewiston-Clarkston Valley.

“I get a sense the (Boy Scouts of America executive committee) doesn’t understand” the full impact, Morgan said. “We just continue to try to promote our program to the people in our sphere of influence, troop by troop.”

In the Inland Northwest, which was recently reorganized from eight districts to four, there were 487 troop and pack units in 2017, Nicholson said. At the end of 2019, 357 units were listed, but that included 170 LDS units that were expected to drop their charters at the first of this year.

‘I never saw the barriers in Scouting’

In the past five years, the Scouts have undergone some tumultuous and significant challenges. Claims of sexual abuse by Scout leaders have taken a financial and public image toll with which the organization continues to struggle.

Recently the organization modified its membership requirements to allow girls and LGBTQ leaders and members. That has led some to charge Scouting as an “immoral” group, Morgan said, and the media has focused on that controversy without looking at the bigger picture.

All Scouting programs are not the same. Morgan said when he was a Scout growing up in Wenatchee, Wash., he was keenly aware of the segregation of troops.

“I was about 15 or 17 when I finally figured out a lot of LDS units did things a lot different than the other programs,” he said. “My troop was a secular troop chartered through a local school.”

The LDS church, he said, used its Scouting program more as a way to prepare young men for church missions. It did not want to allow girls or LGBTQ people into the program.

Scouting is more like a curriculum, in which aims and methods are presented and then individual packs or troops can use the information in whatever way they want. Individual charter groups also can restrict membership in whatever fashion they wish.

“I always felt … there was always this division. I sensed it as a youth and came face to face as an adult, that we really had two different scouting organizations. The LDS wanted to do their own thing in their own way, and they didn’t want to do recruitment. They didn’t need to because people in their church were part of it.”

That left a lot of work to be done for non-LDS units, Morgan said. Although the recent split with the church means a drop in membership and financial support, “I think we’re going to go through a transitional time, but I think scouting will be more true to scouting.

“Not everybody agrees that Scouting is an immoral thing. Scouting, it’s all based on the Scout Oath and Law — these core character qualities … that are being continually rooted out of culture and society. But it’s still there in Scouting.”

Jim Lusby, an Explorer Scout and leader for Troop and Pack 1122 chartered by CrossPoint Church, helps oversee one of the oldest troops in the Lewiston-Clarkston area. Lusby often dresses up like the founder, Baden-Powell, for special events and said the pullout of the LDS church has been a setback for the organization.

“Right now we just went through a decline, and we have about eight or 10 boys and a dozen adults,” Lusby said. “There are other things going on that hurt our interests. See, there’s three things that take boys out of Scouts — cars, girlfriends and college.”

The inclusion of girls in Scouts, however, has been a good thing, Lusby said.

“I’m all for it,” Lusby said. “In my troop we had girls that were sisters (of club members) that weren’t allowed to join, but every time they came to the Scout meeting.”

He also recalls a districtwide meeting in Spokane where three young women stood up to the microphone and said why they wanted to join Boy Scouts.

“They said, ‘I don’t want to make macaroni art; I don’t want to cook. I want to go out and make fires and sleep in a tent and (do activities) right down the Boy Scout line.’”

As far as allowing LGBTQ members and troop leaders, Lusby said his sponsoring organization, CrossPoint Church, has made a rule that there would be no sexual expression of any kind allowed in its Scouting program. Members and leaders are not asked their sexual orientation when they join, he added.

Karen L. Johnston of Moscow is an adult volunteer and the mother of a Scout belonging to Troop 460, a co-ed troop sponsored by the Simpson United Methodist Church of Pullman. Unlike some of the other troops in the Rivers to Ridges district, the two in Moscow and Pullman continue to thrive and haven’t felt the repercussions from the exit of the LDS church.

Johnston said she belonged to a co-ed Explorer troop when she was growing up in the 1980s.

“I was in a female Explorer program so, for me, I never saw the barriers in Scouting. For me, this bizarre barrier has only been created by other people.”

Last year, Troop 460 started a girls’ troop that is undergoing some growing pains but has the support of the boys’ troop. The groups do activities both separately and together.

“So it allows a lot of versatility,” Johnston said. “Scouting is family scouting, and we were blessed in Pullman to find troops that embrace families.”

The inclusion of LGBTQ people in Scouting, Johnston said, “has really allowed Scouts and their families to say, ‘We embrace others.’ It made us more inclusive of all, and, as a parent of a Scout or a parent who volunteers a lot of time, it just gave us the opportunity to serve more people.

“I don’t think any of us are looking at somebody and defining them by their sexual, cultural or religious identity. We’re going to welcome all of us. What a great future we have when we’re teaching our Cub Scouts in kindergarten to be inclusive in Scouting and not be shunned by an organization that is doing better for the world.”

On my honor I will do my best to do my duty to God and my country and to obey the Scout Law; to help other people at all times; to keep myself physically strong, mentally awake, and morally straight.

The Scout Law has 12 points. Each is a goal for every Scout. A Scout tries to live up to the Law every day. It is not always easy to do, but a Scout always tries.

TRUSTWORTHY. Tell the truth and keep promises. People can depend on you.

LOYAL. Show that you care about your family, friends, Scout leaders, school and country.

HELPFUL. Volunteer to help others without expecting a reward.

FRIENDLY. Be a friend to everyone, even people who are very different from you.

COURTEOUS. Be polite to everyone and always use good manners.

KIND. Treat others as you want to be treated. Never harm or kill any living thing without good reason.

OBEDIENT. Follow the rules of your family, school and pack. Obey the laws of your community and country.

CHEERFUL. Look for the bright side of life. Cheerfully do tasks that come your way. Try to help others be happy.

THRIFTY. Work to pay your own way. Try not to be wasteful. Use time, food, supplies and natural resources wisely.

BRAVE. Face difficult situations even when you feel afraid. Do what you think is right despite what others might be doing or saying.

REVERENT. Be reverent toward God. Be faithful in your religious duties. Respect the beliefs of others.