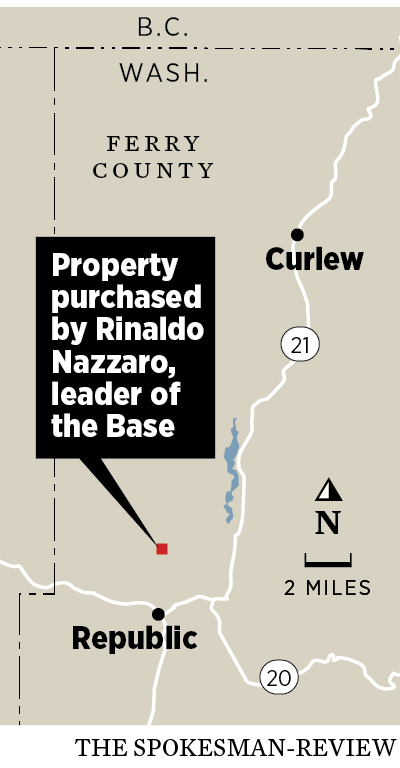 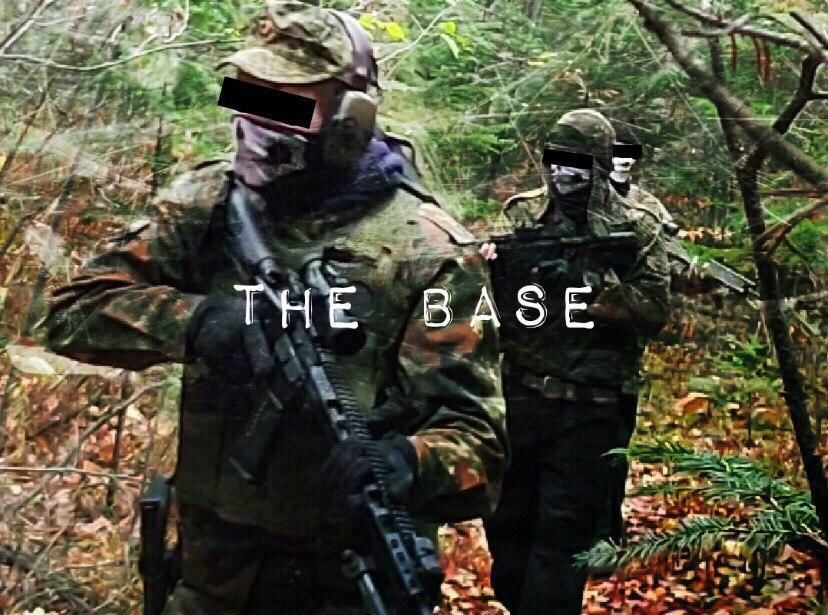 Militant neo-Nazis belonging to the Base are seen in a propaganda image taken from the group’s public channel on the messaging app Telegram.

SPOKANE, Wash. — The leader of the Base — an international neo-Nazi terrorist organization that has been subject to FBI investigations for plotting to start a race war — has taken many steps to conceal his identity, using the aliases “Roman Spear” and “Norman Wolf.”

According to an investigation published Thursday by the Guardian, the leader’s real name is Rinaldo Nazzaro, a 46-year-old who was born in the United States — and who owns 30 acres of land in rural northeast Washington state. The land is 72 miles by air from the Idaho border.

The Guardian reported it pieced together Nazzaro’s identity through property deeds, tax affidavits, business filings, marriage documents and other public records, including email exchanges involving the Stevens County sheriff, the FBI and a researcher with the Southern Poverty Law Center.

The news organization also cited confidential sources within the Base, which uses online chatrooms and encrypted apps to spread propaganda, promote hate crimes and plot acts of terrorism.

The FBI arrested seven members of the Base last week, including three members of a cell in Maryland who are accused of planning to attack a gun-rights rally in Richmond, Va. The members talked of derailing trains and poisoning water supplies, among other atrocities, according to authorities.

The Guardian’s reporting revealed that Nazzaro, through a Delaware-registered company called Base Global LLC, purchased three 10-acre parcels of undeveloped land in Ferry County for $33,000 in December 2018.

The county assessor’s office website shows the property is located less than 3 miles north of Republic, Wash. Two of the parcels abut a block of land owned by the state Department of Natural Resources.

Rumors about those land purchases surfaced in August when Eugene Antifa, a group of anonymous left-wing activists in Eugene, posted on Twitter that members of the Base were “flying in from around the country to Spokane” to hold paramilitary-style training exercises in northeast Washington.

Eugene Antifa indicated the leader of the Base had recently purchased land near Colville or Chewelah. At the time, the Spokane Police Department said it was looking into the claims. Other local authorities began investigating after The Spokesman-Review and other news organizations published stories about the Base’s rumored “hate camp.”

According to the Guardian, Stevens County Sheriff Brad Manke emailed an FBI agent on Aug. 20, asking, “Do you have a name for the actual head of the group The Base or the address where the property actually is?”

On Sept. 20, in an email to an SPLC researcher, Manke said he’d learned the Base had obtained land in neighboring Ferry County, according to the Guardian. The Eugene Antifa rumors had been close, but not quite accurate.

Shortly after the “hate camp” was rumored to take place in northeast Washington, the Base released a propaganda video showing at least seven masked men firing shotguns and assault rifles in what appeared to be a paramilitary-style training exercise in a wooded area.

According to the Guardian, Nazzaro has lived in New Jersey and more recently appears to have lived in Russia with his Russian-born wife, whom he married in New York City in 2012.

Members of the Base have speculated that Nazzaro is really a federal agent or a Russian spy, or that the Base is a “honeypot” designed by law enforcement agencies to entrap neo-Nazis.

The Guardian found Nazzaro runs a company called Omega Solutions International, which has purported to offer a range of intelligence, security and counterterrorism services for governments, militaries and private businesses. The Guardian found the company has a Commercial and Government Entity, or CAGE, code – a requirement for U.S. military and government contractors.

Along with the Atomwaffen Division and the Feuerkrieg Division, the Base belongs to a relatively new cluster of “accelerationist” hate groups that aim to hasten what they see as an inevitable societal collapse. Doing so, they believe, would enable them to create a white ethnostate from the ashes of liberal democracy. Their tactics are similar to those of the Order, a white supremacist terrorist group born out of eastern Washington in the 1980s.

The Atomwaffen Division has recruited members of the U.S. military and has been linked with several hate-fueled murders.

The Feuerkrieg Division has had at least one devotee in the Spokane area. In mid-October, the group took credit for flyers that appeared outside the predominantly black Morning Star Baptist Church. The flyers featured swastikas, other Nazi imagery and calls for violence and genocide.

Later, on Halloween, flyers stating “It’s OK to be white” turned up in the U.S. Pavilion in Riverfront Park. On the messaging app Telegram, the Feuerkrieg Division had told members to post those flyers while wearing Halloween masks to hide their identities.