In a press release today at 4:30 p.m., the Shoshone-Bannock Tribes denounced Rep. Chad Christensen's proposed resolution to the Idaho Legislature which discourages the removal of names, images, and symbols of Native Americans as mascots and images.

"We are deeply disturbed by his efforts to disregard and ignore the fact that we, the ones who are being negatively portrayed, stand against the use of disparaging depictions of American Indians that are harmful to all students and the entire school community, " read the press release.

“Rep. Christensen leaves out the Tribes’ position on the misappropriation of unacceptable terms referring to our Native American peoples, including racial names as “Redskins” and “Savages.” We ask the 65th Idaho Legislature to not approve this resolution," said Chairman Ladd Edmo in the release.

Rep. Christensen, R-Ammon, who also represents Teton County, shared a draft with reporters on Tuesday and said he plans to get it introduced in the House Education Committee soon, reported the Post Register. The resolution says there are “schools or other places within the state that use names, images, or symbols of Native Americans or other indigenous people” and that they “can be authentic, appropriate, and accurate when used carefully with cultural sensitivity.” 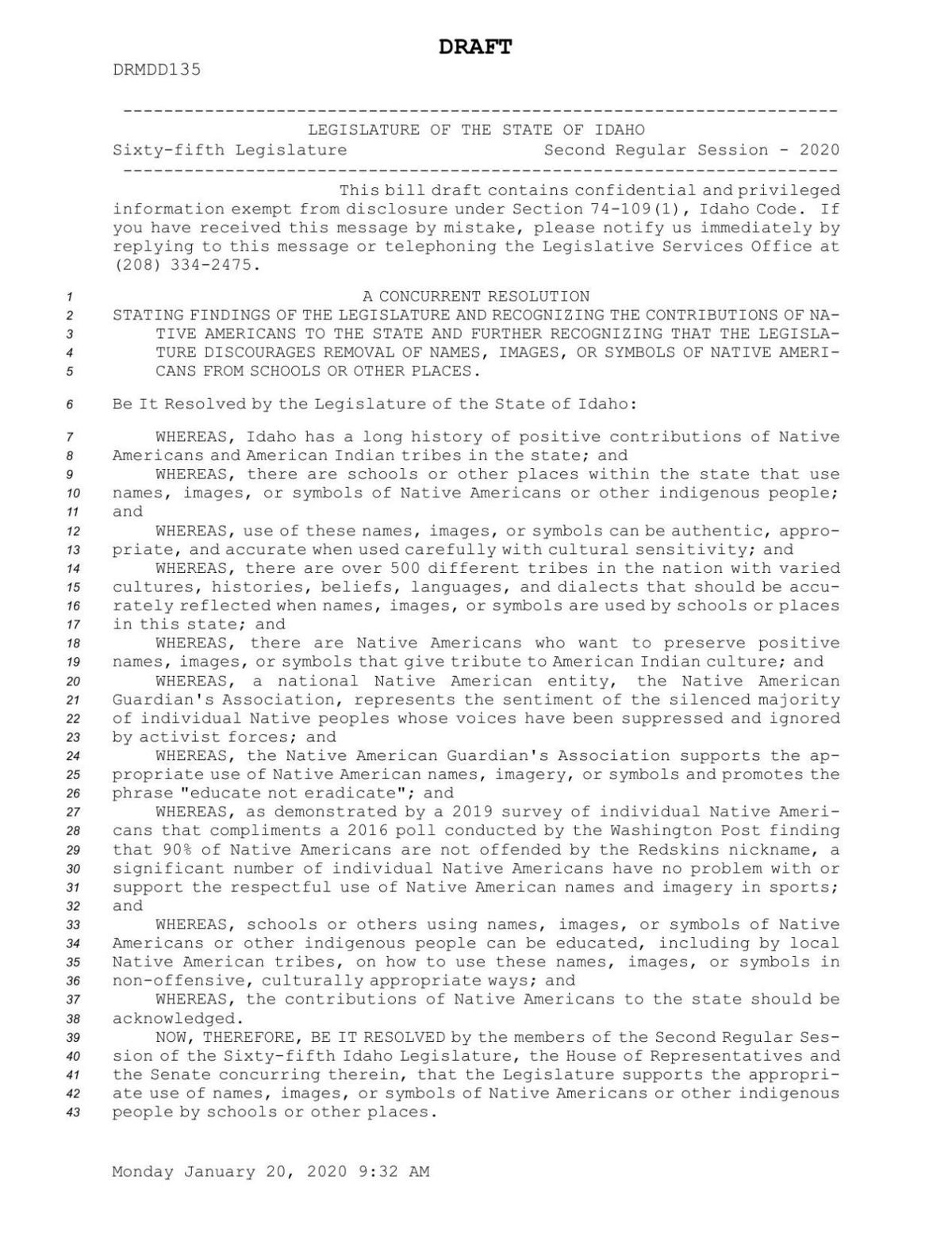 The resolution is in response to the Teton School District 401 voting in favor of retiring the Redskin mascot in July 2019, a vote that the tribe supported and advocated for in Teton County last year.

"The Shoshone-Bannock Tribes support creating a safe, caring and responsible environment that promotes respect for all citizens within Idaho public schools. We do not condone stereotyping, discrimination, or any form of bigotry against any race, ethnicity, or people.

The Tribes went on to add, "When the use and display of damaging words and imagery in schools are allowed, public schools are enforcing the students to tolerate racism, creating a racially hostile environment and engaging in the very same behavior that schools are proposing to fight in their campaigns against bullying."

On Tuesday Christensen told the Teton Valley News that he does not have tribal buy-in for the resolution.

The press release went on to read, "Again, the continued use of American Indians as mascots is not an honor, as this practice enforces the grossly inaccurate portrayal of us as ‘savages’ and uncivilized people. Further, it is detrimental to ALL students as it stunts their perspectives and creates misunderstandings of American Indians. We extend an offer to Representative Christensen to join us in supporting respect and dignity of every child for a more holistic public education."

BOISE — Friday was the last day for House members to file personal bills and several came in, including a resolution inspired by last year’s c…