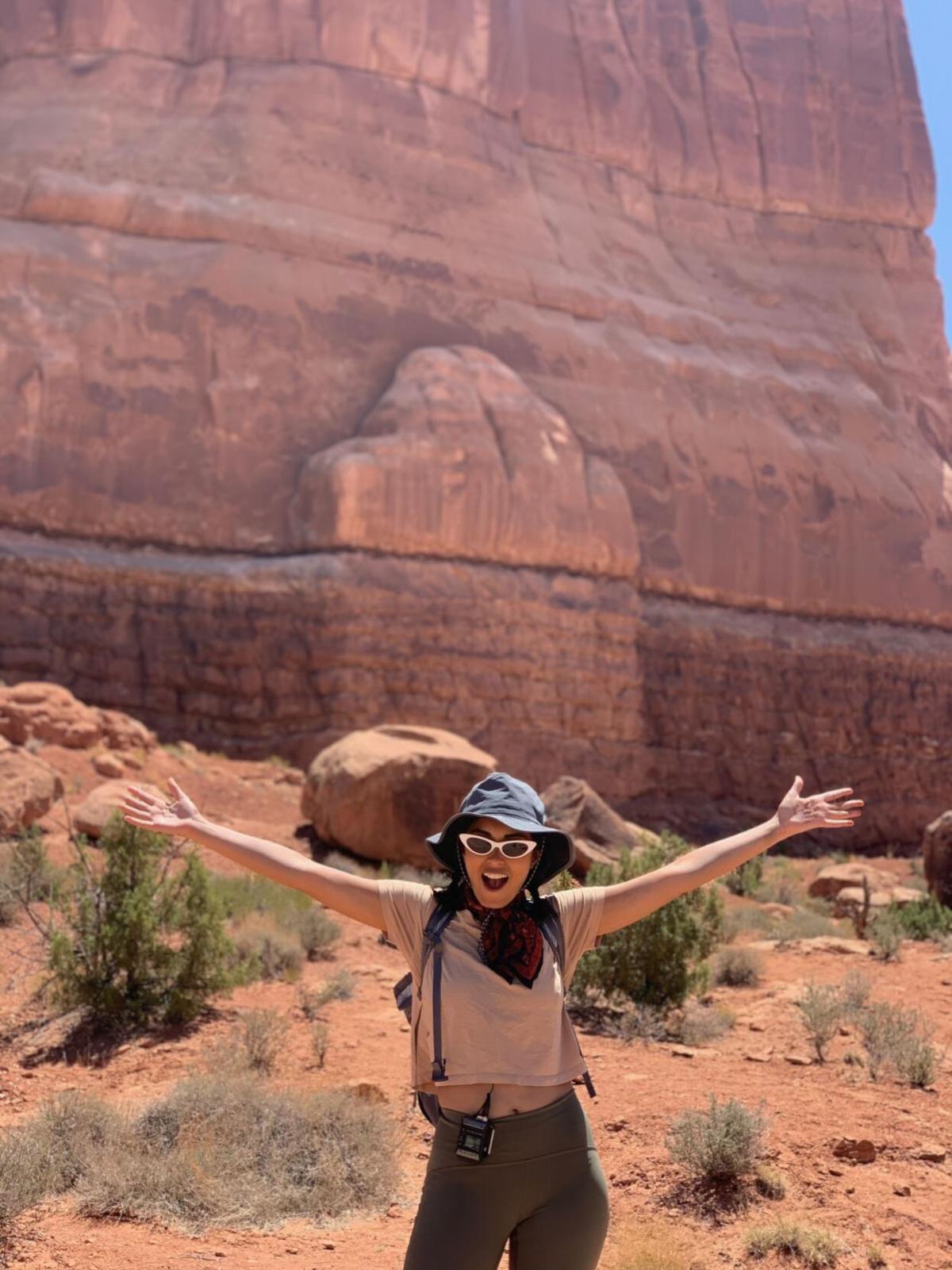 Podcaster Misha Euceph, founder and CEO of Dustlight Productions, partnered with REI for an eight-part series on visiting national parks. Euceph’s ‘Hello, Nature’ podcast focuses on Black, Indigenous, People of Color and their historical and present work in parks. 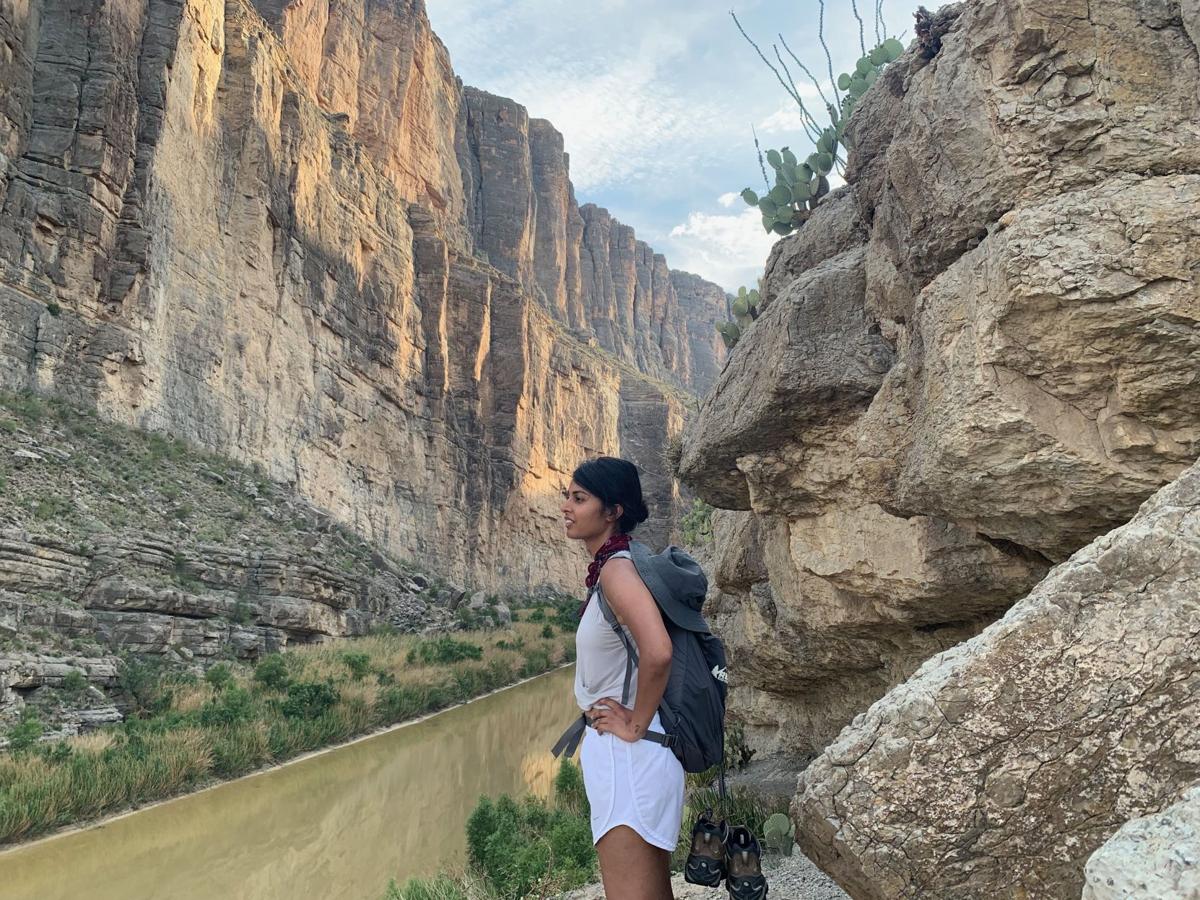 From the desert of Arches National Park to the mountains of Glacier and Yellowstone, Euceph toured a variety of landscapes while visiting with some of the people involved with the parks.

Podcaster Misha Euceph, founder and CEO of Dustlight Productions, partnered with REI for an eight-part series on visiting national parks. Euceph’s ‘Hello, Nature’ podcast focuses on Black, Indigenous, People of Color and their historical and present work in parks.

From the desert of Arches National Park to the mountains of Glacier and Yellowstone, Euceph toured a variety of landscapes while visiting with some of the people involved with the parks.

During a six week rush to visit eight national parks while driving more than 7,000 miles, podcaster Misha Euceph’s fear of being a brown woman traveling across America to wild places dissolved.

“I feel like I went into the show expecting to learn how to nature,” she said in a recent telephone interview, “and came out of it realizing I’ve always been a part of nature, and that there is really no right way to engage with it.”

Euceph was born in Pakistan. Her family moved to Los Angeles when she was 11 years old. While attending a meditation retreat in the desert she learned about the concept of America’s national park system. Intrigued, the CEO and executive producer at Dustlight Productions took a deep dive into educating herself.

Now she’s sharing her knowledge, fears and the expertise of park experts in a new podcast called “Hello, Nature,” which is specifically targeted at helping other Black, Indigenous, People of Color access parks, as well as recounting the history of past BIPOC work in parks.

“I had a lot of fears going in,” she said. “I was scared of hiking alone, scared of bears, I was scared of the dark out in the wilderness. I had just come off of an injury, so I was scared of hurting myself. And on top of that, being a brown immigrant woman I was kind of nervous about how am I going to be perceived.”

Those fears slowly dissolved as Euceph and her producer, Jonathan Shifflett, visited the parks in a whirlwind tour.

“I met a lot of people throughout the country from all walks of life who were welcoming and kind and vulnerable, willing to share their stories,” she said. “So I found the country to be a very beautiful and warm place.”

That’s not always the case for BIPOC folks in the outdoors, as Portland outdoor enthusiast Pam Slaughter noted. She founded People of Color Outdoors (POCO) after encountering racists when she tried to enjoy nature in the Northwest city.

POCO was an outgrowth of an online Meetup group she created in 2015 called Outdoor Afro. When other People of Color said they were being harassed in nature, she expanded the group to Asians, Hispanics and Indigenous people, eventually morphing it into a nonprofit.

“I think that it’s important for people to go out together expecting to have a good time, and expecting to see what’s beautiful out there — whether it’s a bird or leaves, or fragrances or the sounds of water,” she said. “It’s all very healing.”

REI Co-op Studios partnered with Euceph on the “Hello, Nature” podcast, seeing it as a vehicle to expand the Seattle-based outdoor retail store’s goal of getting more BIPOC individuals outdoors.

“We have a responsibility to engage our member community and future members with new shows that inspire them and challenge historically narrow depictions of the outdoors,” said Paolo Mottola, REI’s director of content and media, in a press release.

“This podcast series is part of REI’s goal to prioritize storytelling from BIPOC, LGBTQ+ and other historically underrepresented communities and groups, as well as stories that reflect the human impact on and opportunity to protect the environment,” the company said.

“We have always been here, from indigenous people who have lived in these lands long before American colonization and genocide, to enslaved people who first explored Mammoth Cave to (Asian American Pacific Islander) scientists and artists, to present day LGBTQ+ outdoor recreation groups,” Euceph said in the press release. “And we will always be here. It’s finally time our voices tell the story of the national parks and the story of America.”

“It’s unlike anything I’ve ever seen,” Euceph said of Yellowstone. “From the geysers to the wildlife which is so big and prominent throughout the park.”

The trip included the “craziest weather experience” of the entire trip, a snowstorm in May that squelched plans for camping out, sending the team to a Gardiner hotel.

“It definitely tested my nature abilities, for sure,” Euceph said.

From there, the duo drove to Glacier National Park in northwestern Montana, camping out at Big Creek Campground, which she called “one of the most beautiful campgrounds” of all the ones they visited.

“We were right next to this gorgeous stream,” she said. “There were deer literally frolicking around. No grizzlies, thank God.”

One of their podcast guests in Glacier was guide Derek DesRosier, a Blackfeet tribal member who guides for his family’s Glacier Sun Tours along the east side of the park. They visited Two Medicine Valley, as well as the community of Browning, as DesRosier recounted the area’s importance to the tribe.

Out of the eight parks she visited, Euceph said it was hard to pick a favorite.

“They’re all so beautiful in such different ways,” she said. “It feels like they’re different versions of heaven.”

For her, however the park that “spoke” to her, feeling as if it was a “warm hug,” was Glacier.

“It felt like I belonged there for some reason,” she said.

Looking forward, Euceph said she sees two hurdles for Black, Indigenous, People of Color to overcome so they can enjoy the outdoors and national parks. One is internal and the other is systemic.

“I think if we look at the national parks as a system, and the stories that have been told about the national parks, and the outdoor industry in general, it hasn’t traditionally been a space where People of Color, the Indigenous people, the Black people who have been in these spaces, have been recognized at the center of the story,” Euceph said. “So I think the biggest hurdle, despite not being center stage, is being willing to put yourself out there and try and learn more about maybe the connection you might have to that land.”

She also sees her fears and getting out of her own way as being one of her biggest enemies.

“I was so afraid of racism and of looking like I didn’t know what I was doing, and you get out into these spaces and you realize that people are actually very, very kind,” she said. “They see you struggling on the trail and they want to help you.”

Portland’s Pam Slaughter, on the other hand, has created her own group to travel with and be supportive of each other, ranging in age from toddlers to great grandparents.

“What we’re trying to do is help people heal, people who have maybe had a traumatic experience in nature, maybe they’ve been harassed or attacked and they’re afraid,” she said. “It’s a gentle, very healing, very nurturing space.

“Our main thing is getting people into the habit of getting outside,” she said, using nature as a substitute for celebrating events, instead of ice cream when happy, or to fight off depression instead of hiding out in front of the television with a bag of potato chips.

For the people she interacts with, Slaughter said the biggest obstacle to experiencing nature is transportation – getting to a place to take a walk, especially for younger and older people — as well as a lack of knowledge about where to go without fear of harassment or being attacked.

The reception her group gets when outdoors has gotten better and more positive since it was founded in 2015, she said, which is encouraging.

Co-op Studios, which is REI’s new in-house content arm producing films, podcasts and editorial programs, is committed to racial equity and climate action. Consequently, the studio is prioritizing “storytelling from people and communities that are Black, Indigenous, People of Color (BIPOC), LGBTQ, women, and any other historically underrepresented groups as well as stories that reflect the human impact and opportunity to protect the environment.”

Euceph’s first two shows on Yosemite and Arches are available with new episodes added every Friday until Nov. 5. The Glacier episode is scheduled to drop on Oct. 8 with Yellowstone airing beginning Oct. 15.

Chelsea Davis, REI Co-op senior program manager and content strategist, said she hopes listeners of the “Hello, Nature” podcast “walk away with a new understanding of the parks and are inspired to visit and protect these places.”

The suggestion Euceph got before her travels that has stuck with her is fairly simple.

“Probably the best advice I got was to take a poop shovel, which we never used for poop at all,” she said, laughing as she made the comment. “We actually ended up shoveling snow off of our car with the poop shovel in Yellowstone. Had we not had that, we might have been stuck there.”