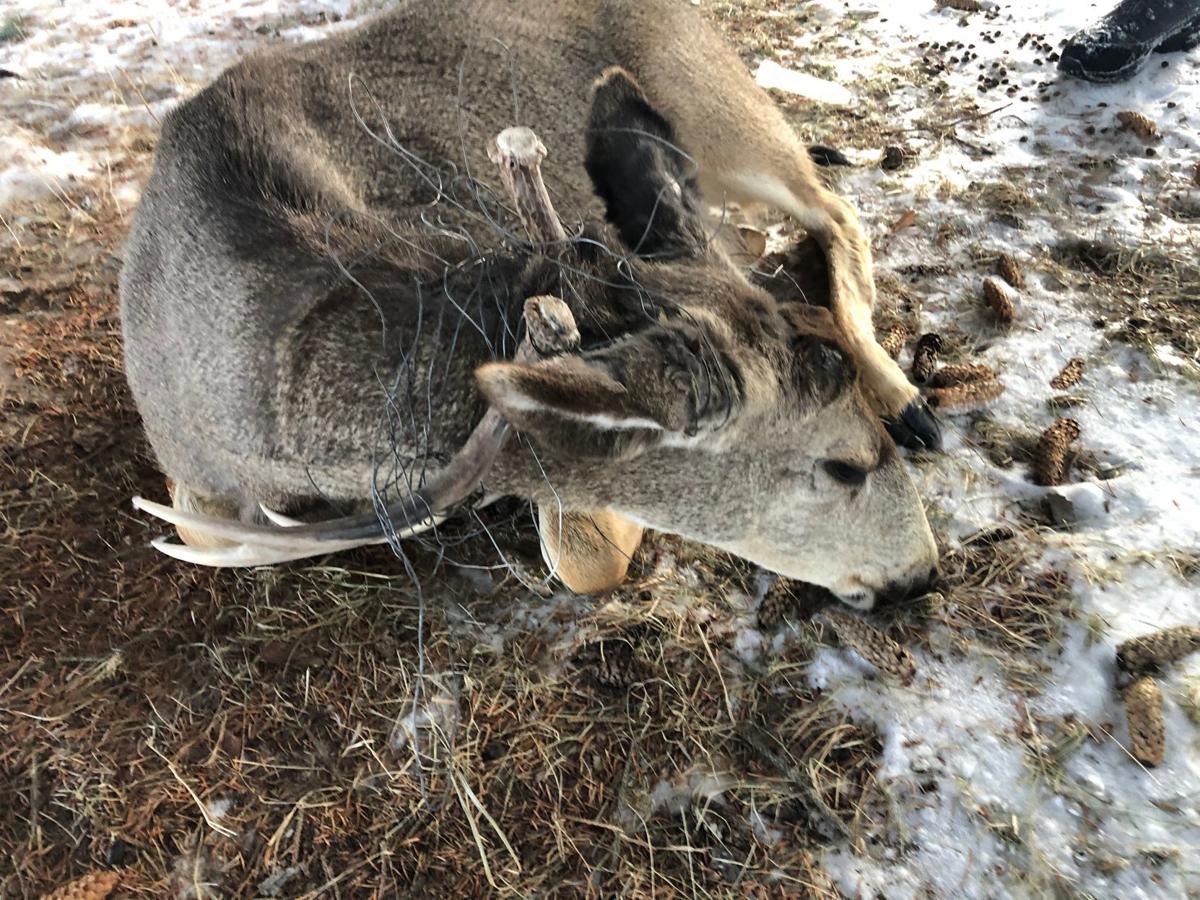 A mule deer buck with wire tangled in its antlers was temporarily sedated so Idaho Department of Fish and Game could remove the wire. 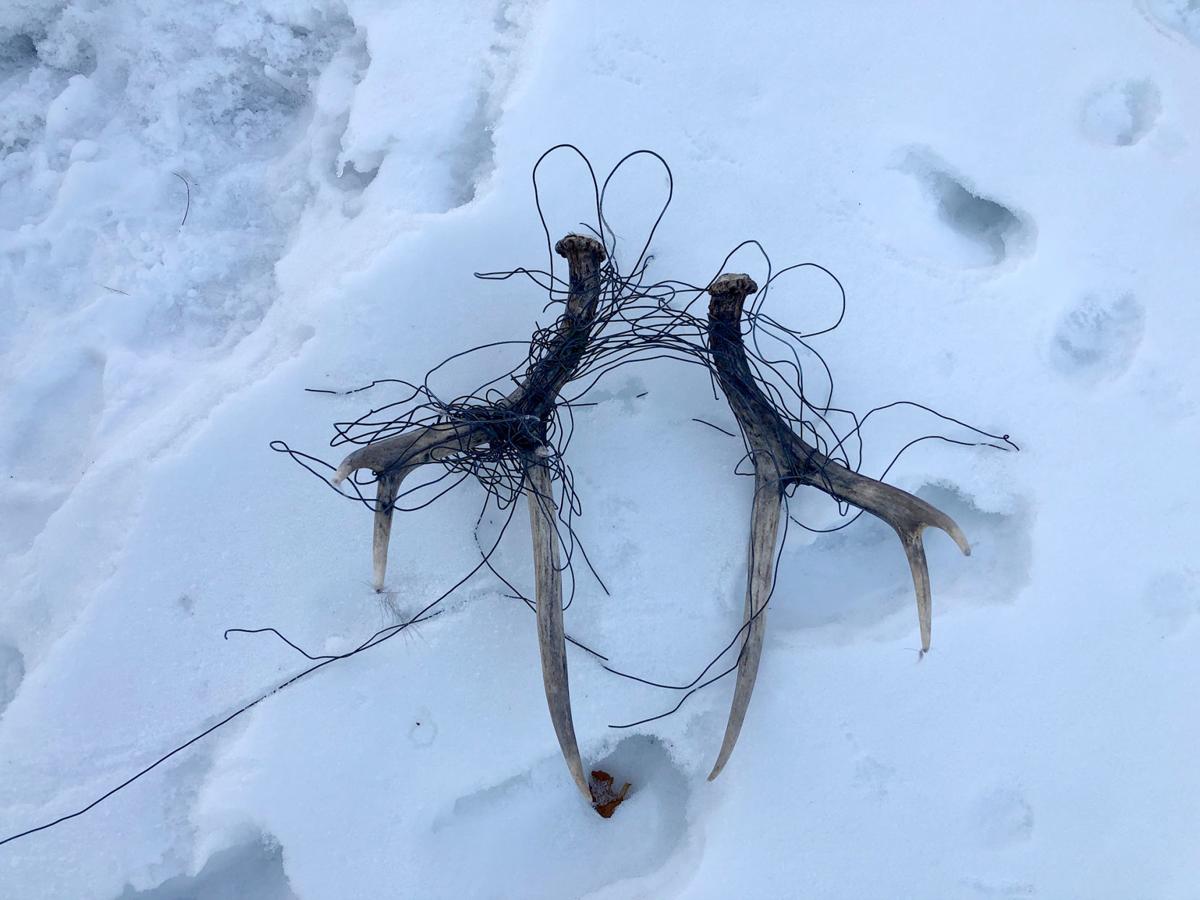 A mule deer buck with wire tangled in its antlers was temporarily sedated so Idaho Department of Fish and Game could remove the wire.

Kelvin Burton has a few interesting images on his phone. Not snapshots of his kids. Not fish photos either. What Burton has is a buck. Even better, it’s an image of a mule deer buck with antlers running down both sides of its neck. Yes, down. Not up. The antlers that grew out of the top of its head last fall ended up sandwiching its head this spring. How? A wad of wire.

“He’s been that way for a quite a while, at least a month,” Burton said. “The herd split up and he disappeared for a while then be showed up again.”

Burton lives east of Idaho Falls. There’s a herd of deer that crosses through his pasture when harsh winter conditions start wearing down wildlife in the high country. When the wired buck showed up again in late February, Burton contacted Idaho Department of Fish and Game. They sent a biologist to sedate the buck and remove the wire, rack and all. The buck ran free after removal, but this probably won’t be its last run-in with wire. There’s acres of it strung across the West.

“We’ve done four fence removal projects in the last five years and we’ve hauled away two to three truckloads of wire at each project,” said Joselin Matkins, Teton Regional Land Trust executive director. “The ones we remove are no longer functional. They’re just out on the landscape, not marking a boundary anymore, and animals can get caught up in those and get injured or trapped.”

Fencing meant to keep cows in also keeps wildlife out. That’s why the Land Trust recruits volunteers to help remove obsolete fencing. If left standing, and strung far, barbwire can block wildlife migration routes, especially if animals can’t jump over it or slide under it. That’s why height standards for wildlife friendly fencing are established. Four strands of wire fencing should start 18 inches above the ground and stop 40 inches above the ground. Most of the older range fencing was built before the standard was established so if it’s not being used anymore, Teton Regional Land Trust and other nonprofits help remove it.

“Removing fence is definitely hard work, but it’s one of the more gratifying things you can do for wildlife,” Matkins said. “We want to make sure wildlife can move free of hazards,”

Scientists have long known animals move from one place to another, but for decades they didn’t know exactly when or how. Now they know thanks to thousands of animals fitted with trackable GPS collars. That’s how they know migrators are running into fence.

Wyoming researchers documented the longest mule deer migration on record in 2016. They added visuals to the journey in 2019. It’s a 242-mile move by collared doe #255, pregnant with twins, in the Greater Yellowstone Ecosystem. She migrates from Wyoming’s Red Desert to Island Park, Idaho. The route displays in 3D with obstacles, fence and freeway included. It also displays fixes for bottlenecks because clearing the way, means more game make it all the way.

“With old VHF collars we only got one location maybe once a week or once a month,” said Daryl Lutz, Wyoming Game and Fish Department wildlife management coordinator. “Today [with GPS collars] we’re getting literally dozens of locations per day. We see every day where that mule deer is and how long that mule deer is staying in that particular area. That allows us to determine in time and space how animals are using the landscape at a really fine scale.”

The wired buck Burton found wasn’t collared but even if it had been, there’s no way to identify a physical problem with a deer just by location points on a map. Collar signals change when animals stop moving, but they don’t record injuries or excess baggage. The buck with a rack wrapped around its neck could move and it probably moved like that for months. Burton, a life-long hunter, suspects the buck accidentally collected the wire when its antlers were on top of its head. When shed season arrived, the antlers didn’t drop to the ground. They slid down around the deer’s neck with the wire.

Be four strands of wire

Be barbless on top and bottom strand