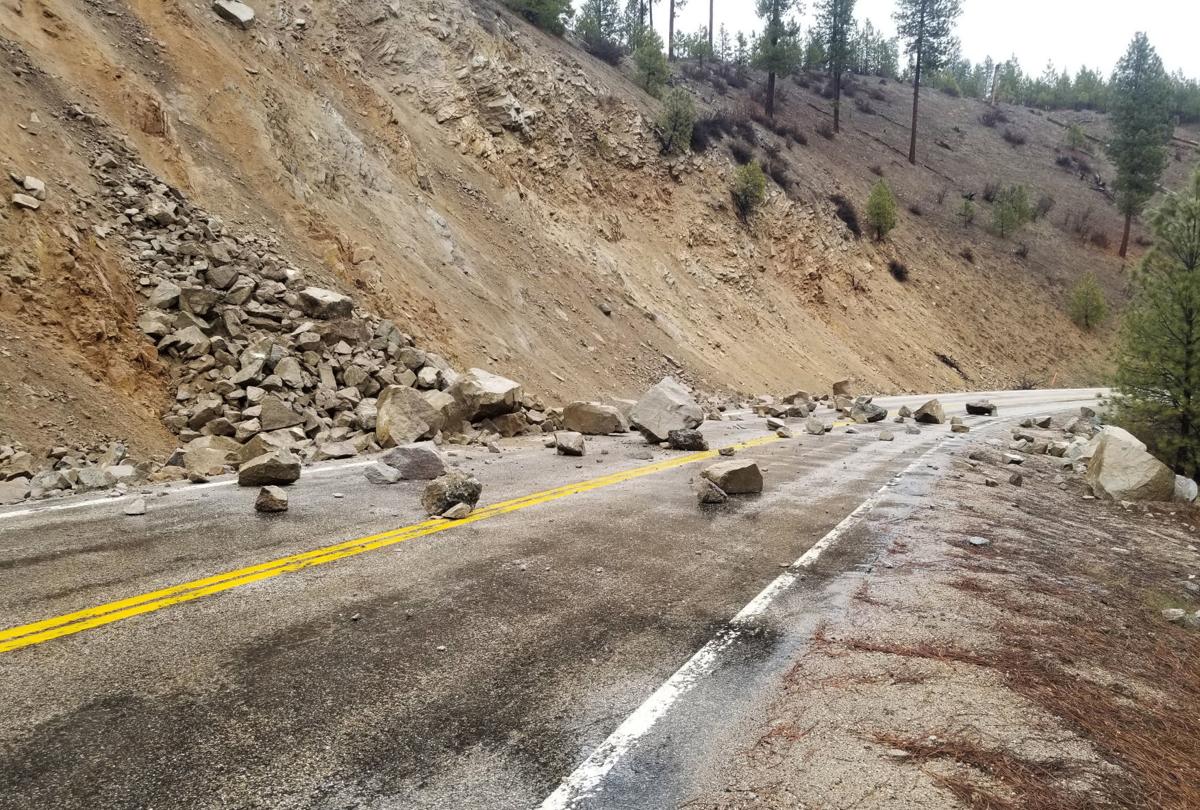 This photo provided by Tyler Beyer shows a rock slide on Idaho Highway 21 near Lowman after a magnitude 6.5 earthquake struck Tuesday about 45 miles west of Challis. 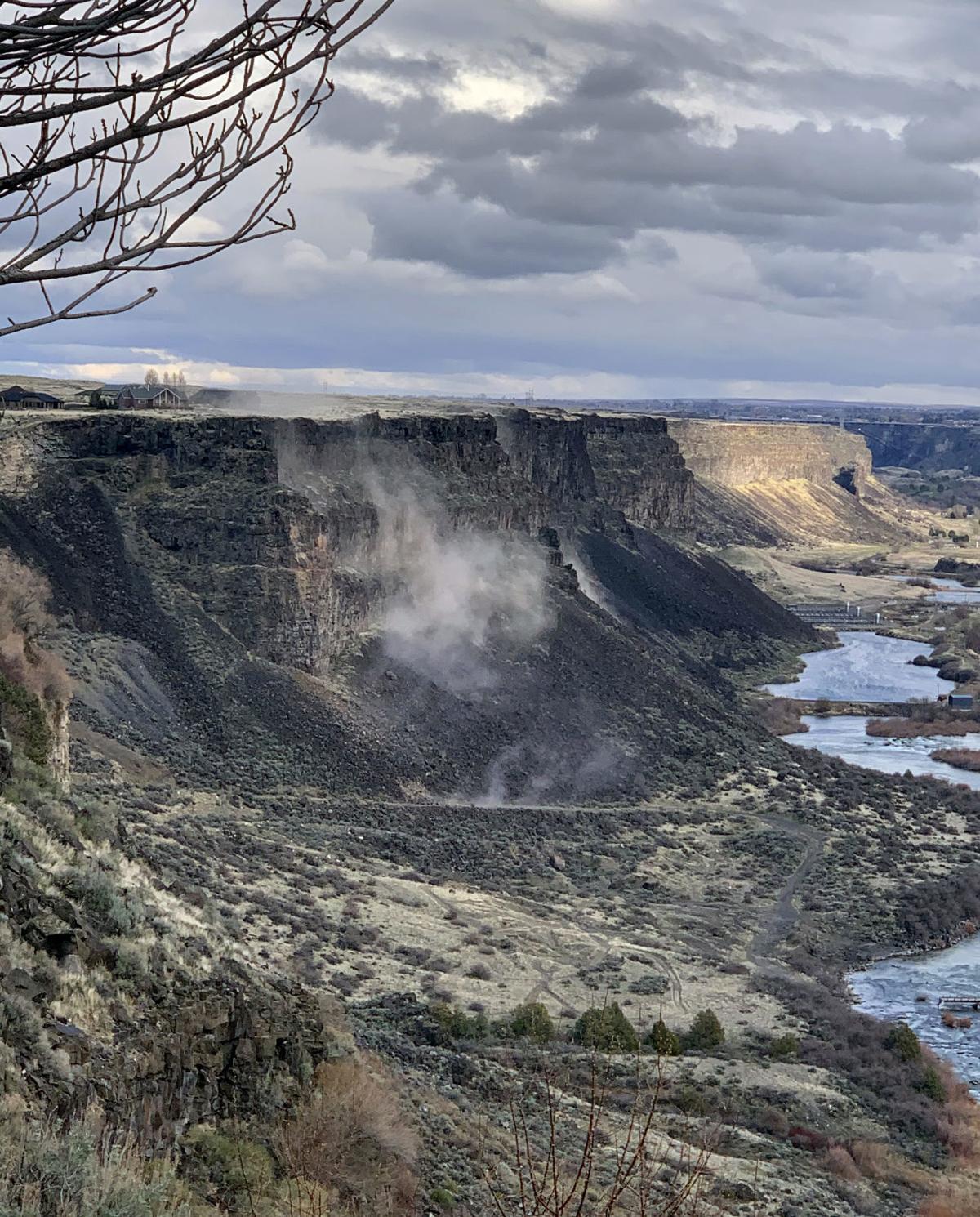 In a photo provided by Israel Bravo, rocks fall from the north side of the Snake River Canyon near Twin Falls during a Tuesday earthquake that struck about 45 miles west of Challis.

This photo provided by Tyler Beyer shows a rock slide on Idaho Highway 21 near Lowman after a magnitude 6.5 earthquake struck Tuesday about 45 miles west of Challis.

In a photo provided by Israel Bravo, rocks fall from the north side of the Snake River Canyon near Twin Falls during a Tuesday earthquake that struck about 45 miles west of Challis.

A 6.5 magnitude earthquake struck Idaho on Tuesday night, rattling residents across the region.

The shaking started just before 6 p.m. with the U.S. Geological Survey reporting the epicenter 78 miles northeast of Boise.

It is the largest quake recorded in Idaho since the Borah Peak earthquake on Oct. 28, 1983, that registered at 6.9. The epicenter of the Borah Peak quake was located about 10 miles from Mackay at Lehmann Butte, with the main force dissipating over a sparsely populated area northwest of the community. Two children in Challis were killed in the quake.

Tuesday’s quake was felt near Stanley.

Harvey Dale has owned a house seven miles south of Stanley across from the fish hatchery for 10 years and has been full-time resident since January 2018.

“There was lots of rumbling,” he said. “But we didn’t lose any glass or have any broken windows. We’ll have to wait a month or so to see if we have any cracks in the siding or the foundation.”

Dale’s nearest neighbor lives about a mile away but as of 7:30 p.m. Tuesday, Dale said he hadn’t heard of any injuries or any major structural damage to the community’s buildings.

Tuesday’s shaker was the second large earthquake in the region within the past two weeks. A 5.7 earthquake struck near Salt Lake City on March 18, resulting in minor damage and hundreds of aftershocks.

That earthquake was felt across the Wasatch Front area of north-central Utah and reportedly felt as far away as Wyoming.

Marcus Smith, an emergency room health unit coordinator at St. Luke’s Wood River Medical Center, told the Associated Press that the hospital, about 65 miles south of the epicenter, shook but the quake didn’t interfere with the treatment of any patients. The hospital in Blaine County is on the front line of Idaho’s coronavirus outbreak, in a region with the highest per-capita rates of known COVID-19 cases in the nation outside of New York City and surrounding counties.

Brett Woolley, a restaurant owner in Stanley, told the Associated Press he heard earthquake coming before he felt it.

“I heard the roar, and at first it sounded like the wind but then the roar was tremendous,” Woolley said about 10 minutes after the earthquake. “The whole house was rattling, and I started to panic. I’m sitting here perfectly still and the water next to me is still vibrating.”

By about 7:20 p.m. Tuesday all he'd found were a lot of rocks on Idaho Highway 75 that tumbled from the hillsides into the driving lanes, according to Custer County Commissioner Wayne Butts. The worst spot was at Ice Corner, the nickname for the bridge above Clayton on the way to Stanley, Butts said.

Butts had spoken with Sheriff's Office personnel, other commissioners, personnel at the Stanley and Pahsimeroi fish hatcheries and county residents and said none of them reported any damage from the earthquake. Idaho Fish and Game law enforcement officers notified Custer County officials they were available to help deputies, if needed.

Butts also spoke with personnel in the governor's office who wanted to make sure Custer County didn't need any assistance from the state and assured them everything was good.

Butts was in Challis at the time but says he didn't feel the earthquake.

"Like I told the governor's office, there was one last package of toilet paper and I got it and I was so excited, I didn't feel a thing," Butts said.

On a more serious note, he said "it sounds like we dodged a bullet."

He had spoken with Custer County Commissioner Steve Smith whose family owns and operates a ranch at Borah Mountain. Smith said everything in the Mackay area was OK after the earthquake. Smith told Butts he felt the ground shaking, but it was nothing like the big quake of 1983, the epicenter of which was basically on Smith's property.

'Memories of the big one'

East Fork rancher Doug Baker said when the rumbling started and the ground started shaking "it brought back memories of the big one," referring to the 1983 Borah earthquake.

Baker was working at the Forest Service office in Challis when the 1983 event occurred. That shook the ground hard enough that file cabinet drawers popped open and coffee spilled out of cups, he said.

Tuesday's quake "rumbled pretty good," Baker said. "It started out like the other one -- a rumble and alight shake and then it got more and louder and lasted quite a while. The noise was like the big one."

Baker said he held on to his flat-screen TV because it was shuffling around and he thought it would topple, but it didn't fall over. His house didn't suffer any damage and the initial surveys of his family's ranch didn't indicate any damage to animals or fences or corrals, Baker said.

Baker said based on the maps he'd been looking at since the quake occurred, he thinks the epicenter was at Cape Horn by the Beaver Creek Campground.

'Next thing I know my house starts shaking'

When Custer County sheriff's deputies Lane Bowman and Kyle O'Brien started their days off, they didn't expect a 6.5 magnitude earthquake would interrupt their recreational time.

"I was on my floor playing video games," O'Brien said. "Next thing I know my house starts shaking."

"I think it lasted about five seconds," Bowman, who lives near Stanley, said. "It wasn't very long but now all my picture frames are crooked."

The earthquake hit about 80 miles north of Boise, near Stanley. Bowman said said his home and neighborhood remained undamaged and as far as he knew on his day off, no one was hurt.

Deputy Matt Williams, who was on duty in Mackay when the earthquake shook the town, reported no serious damage or casualties in Mackay.

"I was running traffic in the middle of town and all of the sudden my car starts shaking," Williams said.

Immediately after the earthquake Williams said he was in increased communication with the Sheriff's Office in Challis. He said as far as he knew, the county as a whole is fine.

Mountain Village Restaurant Bar Manager Randy Bradford said the earthquake didn't interrupt take-out orders at the Stanley business, but it gave it him a scare when all of the glass bottle behind the bar started to sway.

"There was a loud rumble, then it started to shake," Bradford said. "The shaking kept getting worse. Nothing broke, thank God."

Bradford said he spent the aftermath of the quake checking the restaurant for compromises and making "quite a few calls." Bradford said friends and family checked in with him, making sure he wasn't hurt.

Business returned to normal relatively quickly. He said as far as he knew the earthquake didn't cause any damage in Stanley and no one was hurt.