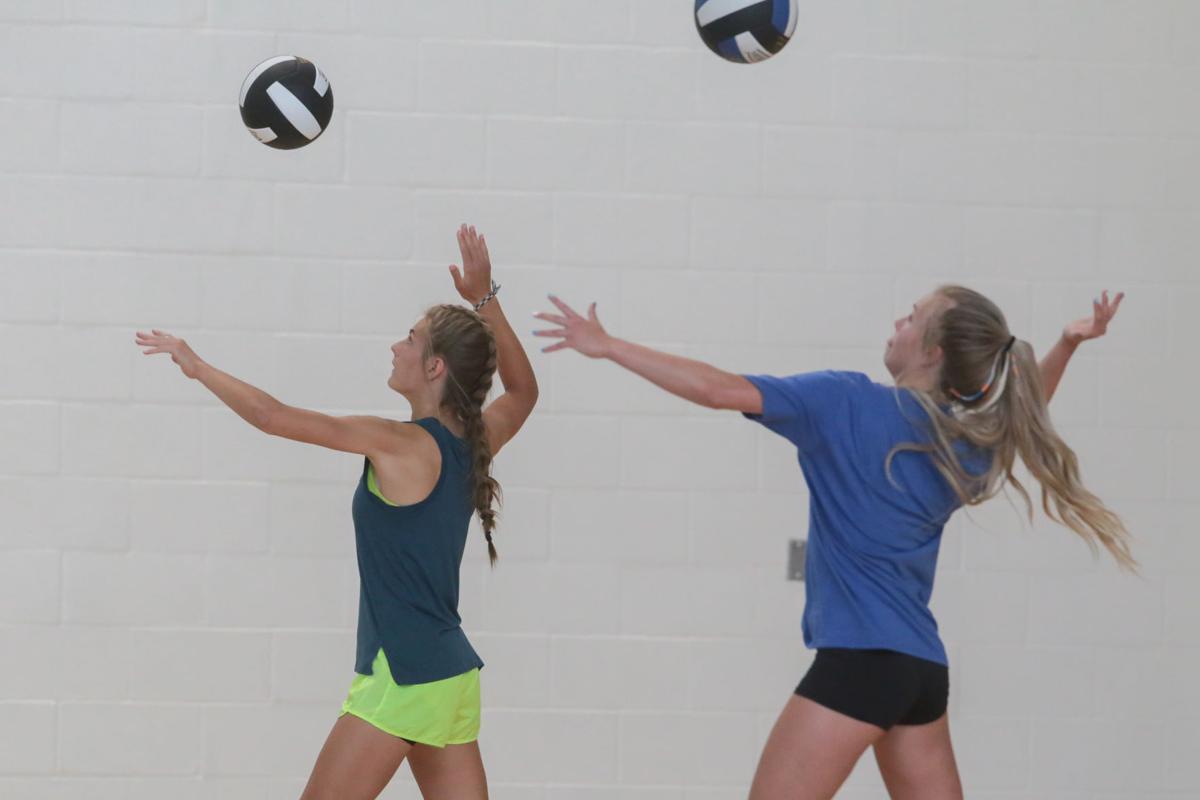 Sierra John and Aspen Caldwell prepare to hit during a practice at Thunder Ridge High School. 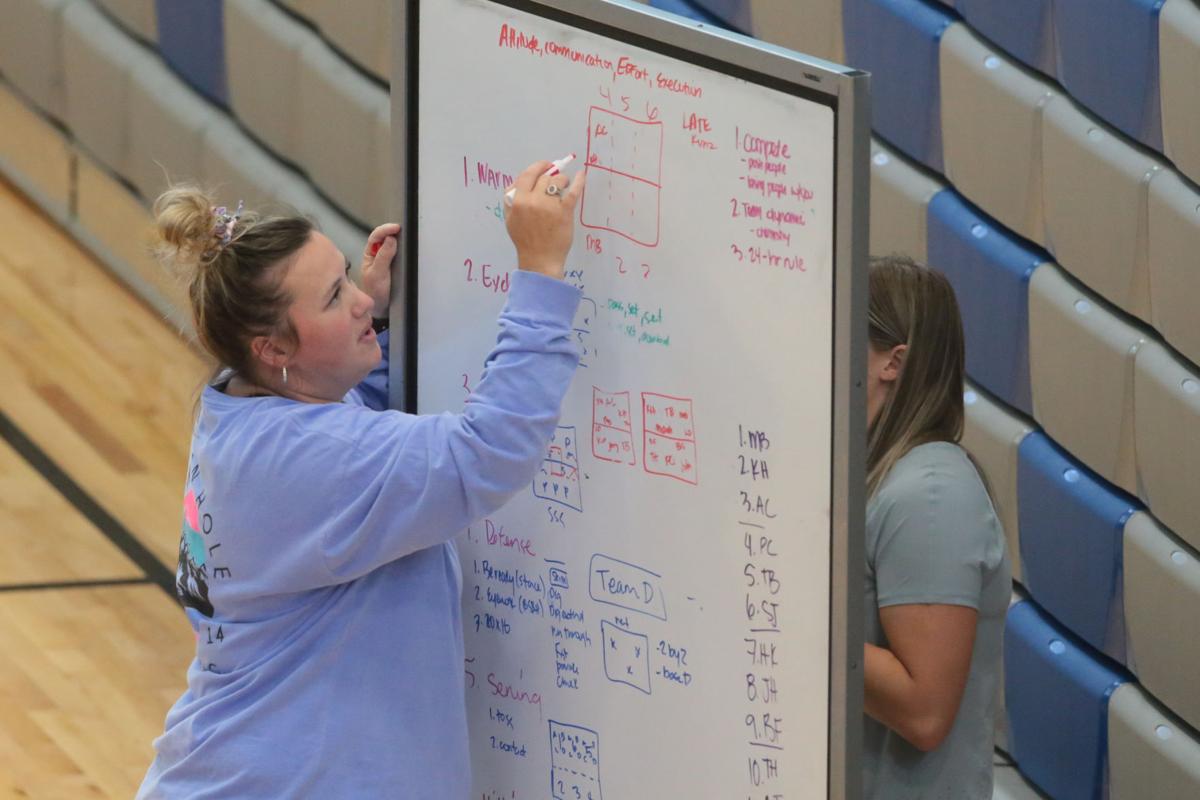 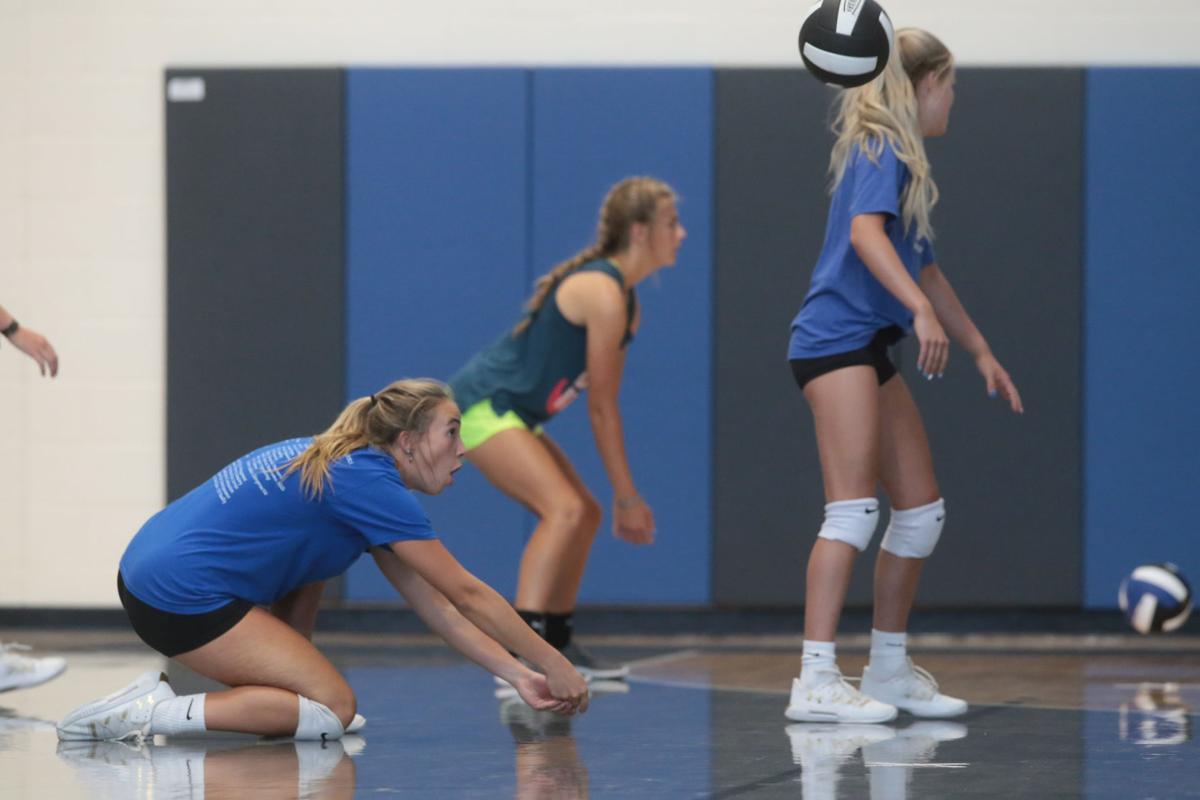 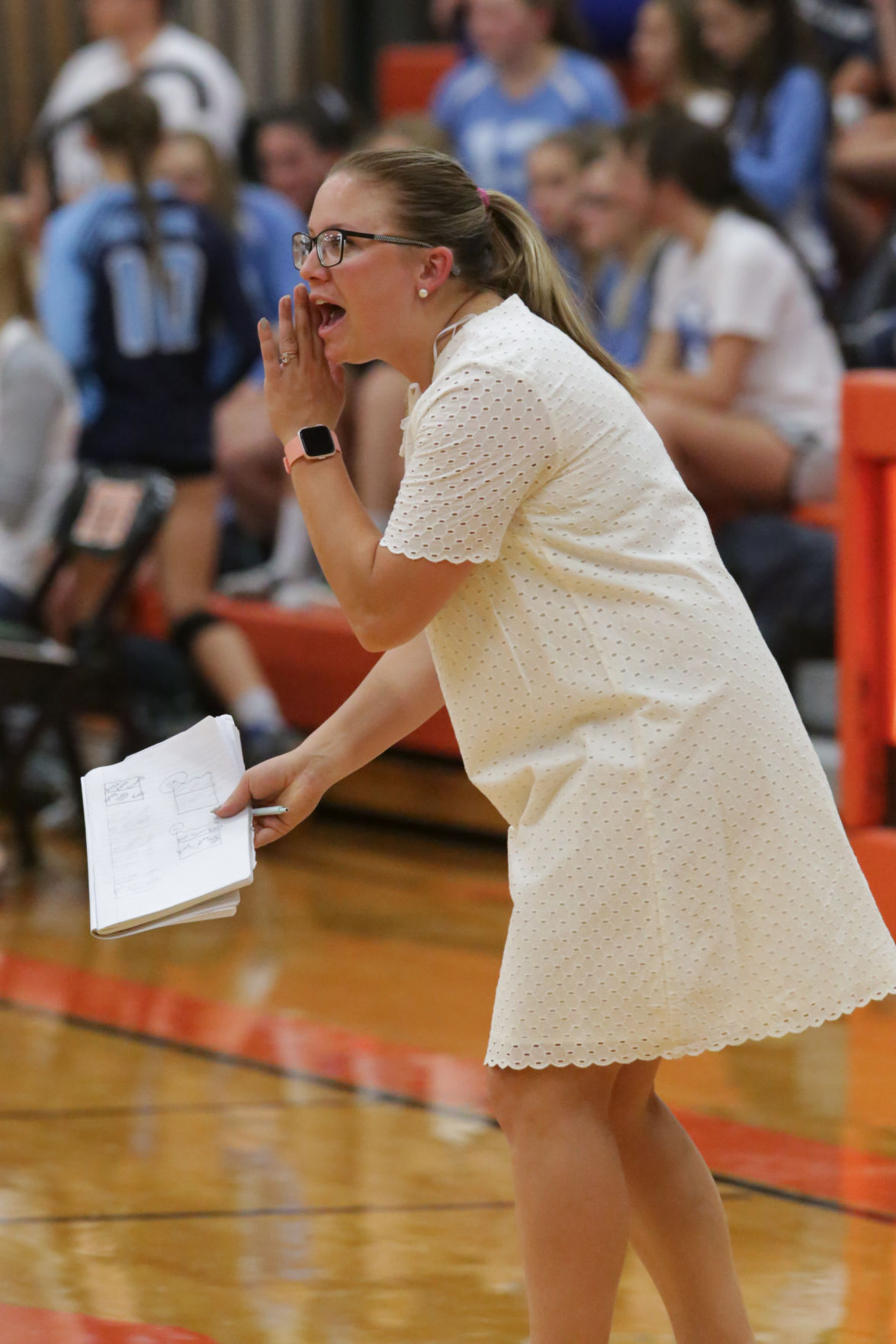 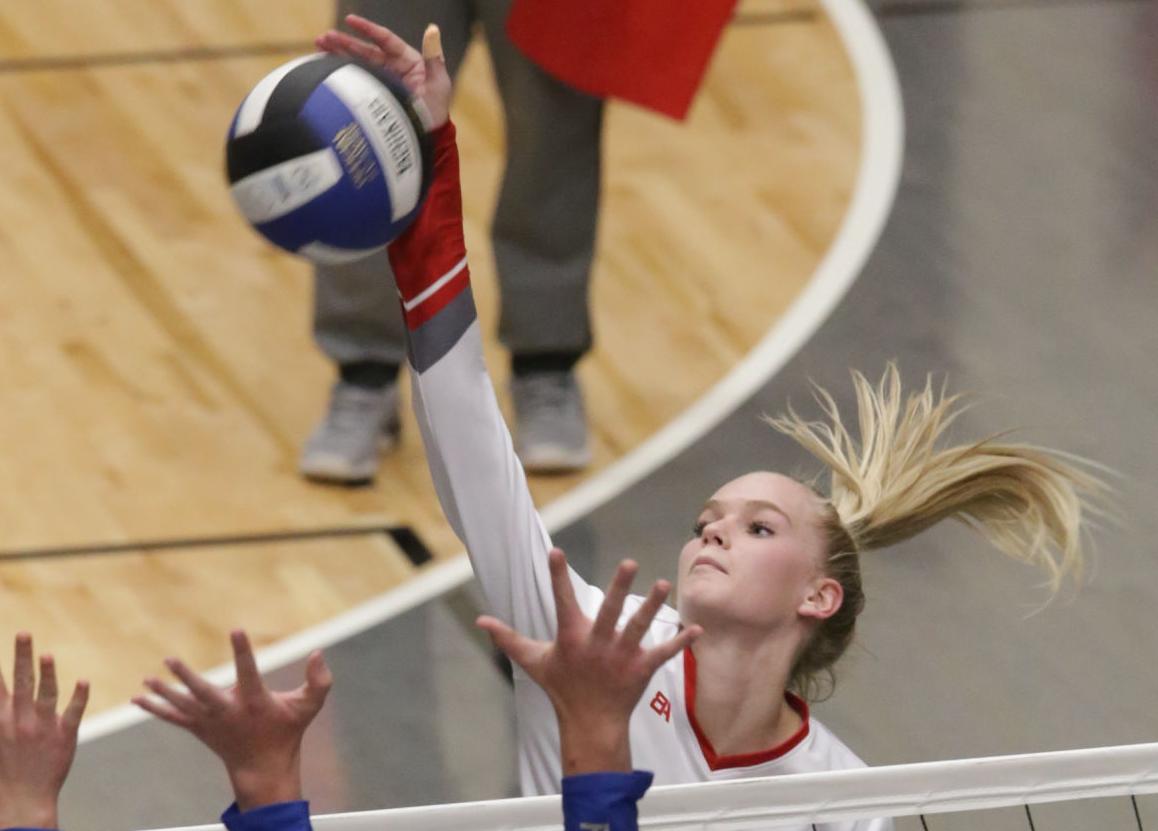 Sierra John and Aspen Caldwell prepare to hit during a practice at Thunder Ridge High School.

Last season added an exclamation point to the volleyball hotbed that is eastern Idaho.

Of Idaho's six state titles, five went to District 6 teams. The 5A title went to Thunder Ridge in its second year of existence, giving 5A District 5-6 its second state title in as many seasons.

Idaho Falls' move to 5A District 5-6 this fall expands the conference to five teams. The Tigers have a history of success in 5A, winning six titles from 2003 to 2015 under retired coach and current Hillcrest athletic director Wendy Johnson. Idaho Falls re-enters 5A under second-year head coach Kaitlyn Zarpentine, Johnson's oldest daughter and a senior on the Tigers' 2011 state title team, who said she looks forward to joining the conference that has produced the last two 5A state champions.

"I love this," Zarpentine said. "I love playing with the big dogs. It's back in home territory."

"I.F. has a history of being a solid program," said Maestas, whose Bobcats won the 2018 5A state title and have two seniors in Sidney Parker and Charity Wilson. "Four (teams) is kinda nice because it's a little bit easier to get to state. Five just adds another element of excitement to the conference."

"I think all our five teams that will be in there have good kids and great coaches," added Fisher, whose team graduated five starters. "It's gonna be competitive, all five schools."

I.F.'s move also drops 4A District 6 from six teams to five, meaning a play-in game will be necessary for a second team to reach the state tournament. Second year head coach Bryant Neibaur said Bonneville, which won its third state title and fourth district title in four seasons last fall, is still 'the benchmark in the state.' The Bees graduated All-Area Player of the Year Sadie Lott, Gatorade Player of the Year Makayla Sorensen and Alexis McMurtrey, four-year varsity players who signed with colleges and ended their careers in Bonneville's all-time lists.

"I think Bonneville is still gonna be the team to beat even though they don't have a lot of returning players," said Neibaur, whose team has five senior starters. "I think they will still make a run."

Senior Mariah Jardine returns for the Bees, who are otherwise young and have a large freshman class.

"It's kind of refreshing," McMurtrey said. "We have so many kids that are new and have so much to learn. Our lineup may change a few times."

Coaches at various size schools dealt with a lost club season in the spring and a modified summer schedule due to COVID-19 and now are implementing protocols at practices. Zarpentine said the Tigers are focusing on the here and now and adhere to detailed precautions, from doing strength and conditioning outdoors to leaving gym doors open for better ventilation.

"We're trying to make sure we have a season," Zarpentine said. "I tell them on a regular basis, 'Leave everything on the floor because we don't know when well get another practice. We're following all the social distancing and sanitizing to a 'T.' We're trying to cover every detail."

Thunder Ridge senior setter/right side hitter Paige Clark, a University of Montana signee, said losing senior year experiences to COVID-19 made her sad at first. Now she has a different perspective, adding that the Titans are starting to bond and she hopes to use this year to prepare herself for playing in college.

"I just kinda look at it as everything happens for a reason," Clark said. "Last year, my main focus was wining state. That's been a dream since I was little. Now that I've signed, I want to get better and compete at that level."

Mariah Jardine, sr. middle blockr/right side, Bonneville: Jardine, who was called up to varsity as a freshman, had 263 kills, 88 digs, 60 blocks and 42 aces last season.

Sidney Parker, sr. middle blocker, Madison: Parker had 435 kills, 45 blocks and 320 digs last season, when she played both outside hitter and middle blocker.

Kiley Mecham, sr. outside hitter, Firth: Mecham, who had 33 blocks, 13 aces, six assists and 69 digs last season, will take on a bigger role this fall for the 2A state Cougars.

Charity Wilson, sr. outside hitter, Madison: Wilson, who had the final kill of the 2018 state title match for the Bobcats, is back after an ACL tear sidelined her until late September of last season.

Thunder Ridge at Madison, 7 p.m. Sept. 15: First meeting of the season between the last two 5A state champions.

Idaho Falls at Skyline, 7 p.m. Oct. 13: Nonconference match this year, but the rivalry has become intense and hard fought in recent seasons.

Firth at Sugar-Salem, 5 p.m. Aug. 27: Always a tough nonconference match, and this season it is between two defending state champs.