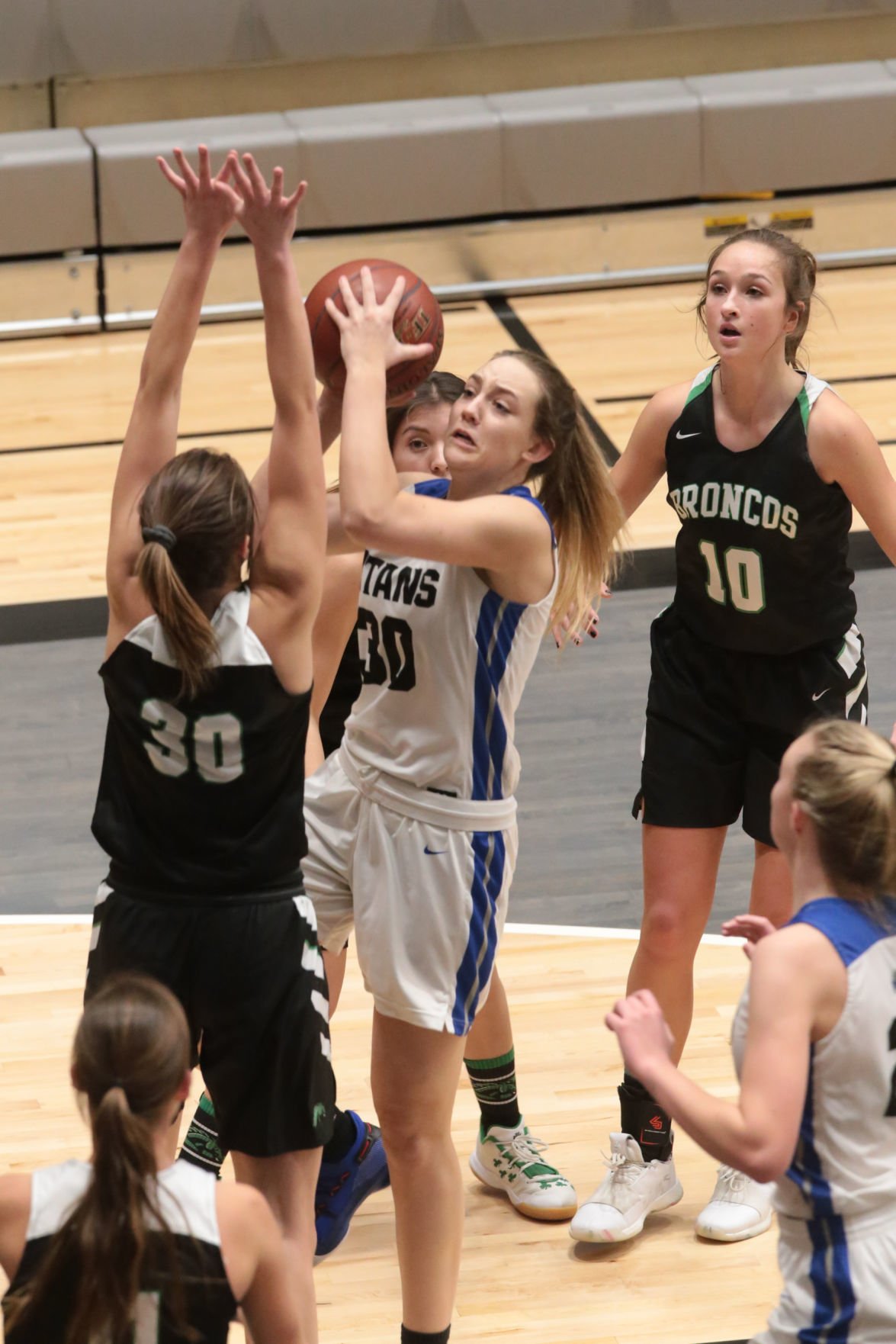 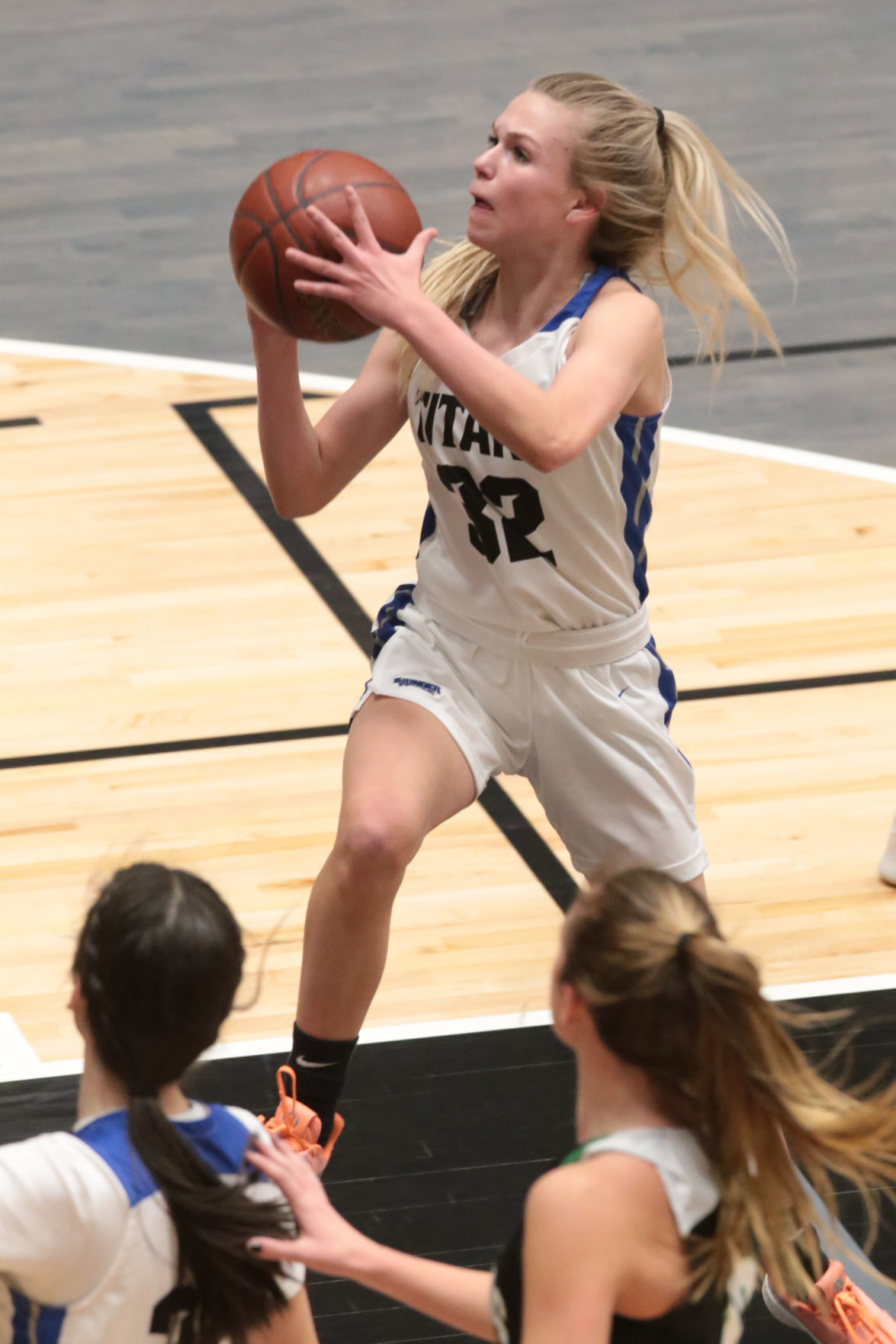 Thunder Ridge's Aspen Caldwell elevates for the shot during Wednesday's game versus Blackfoot. 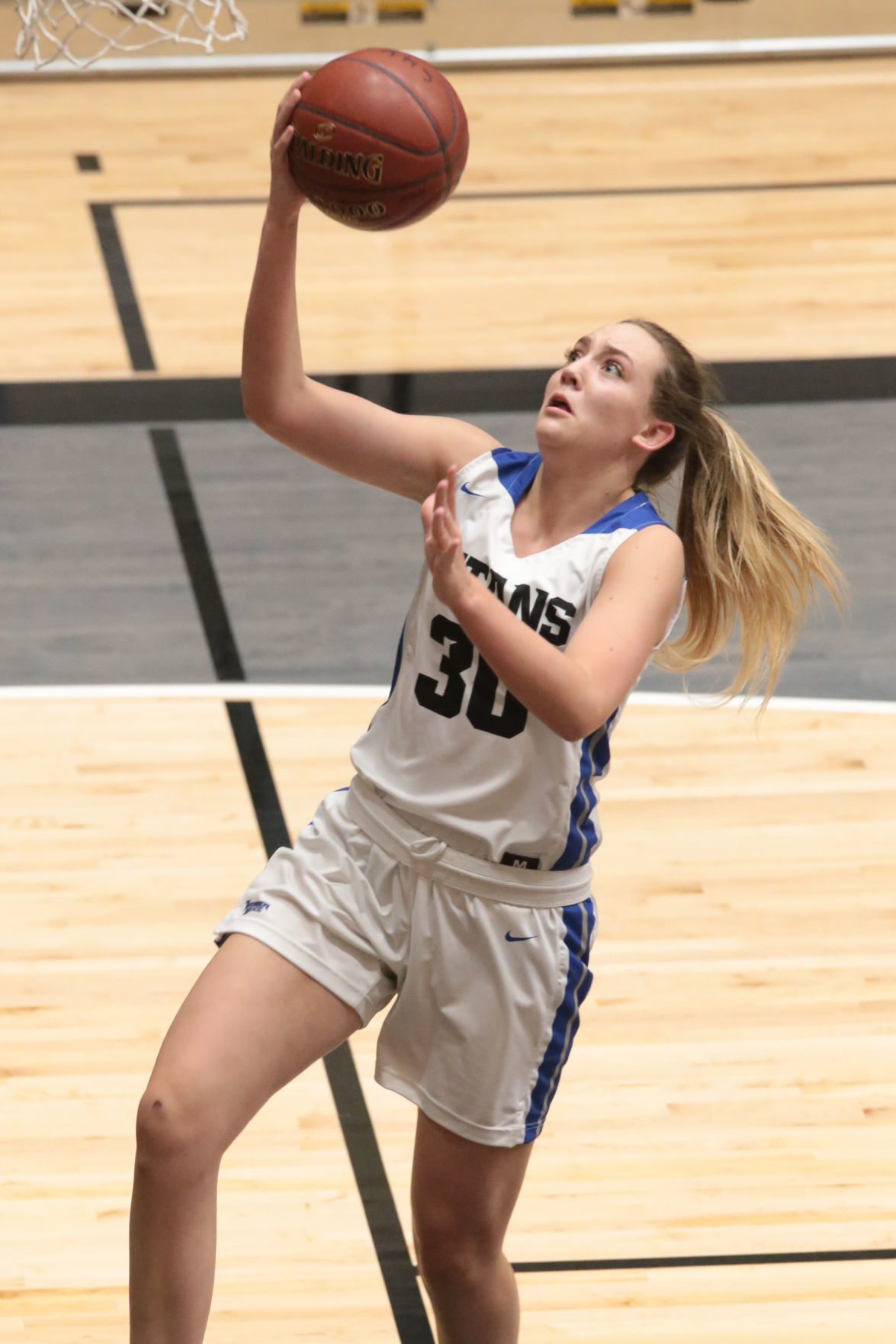 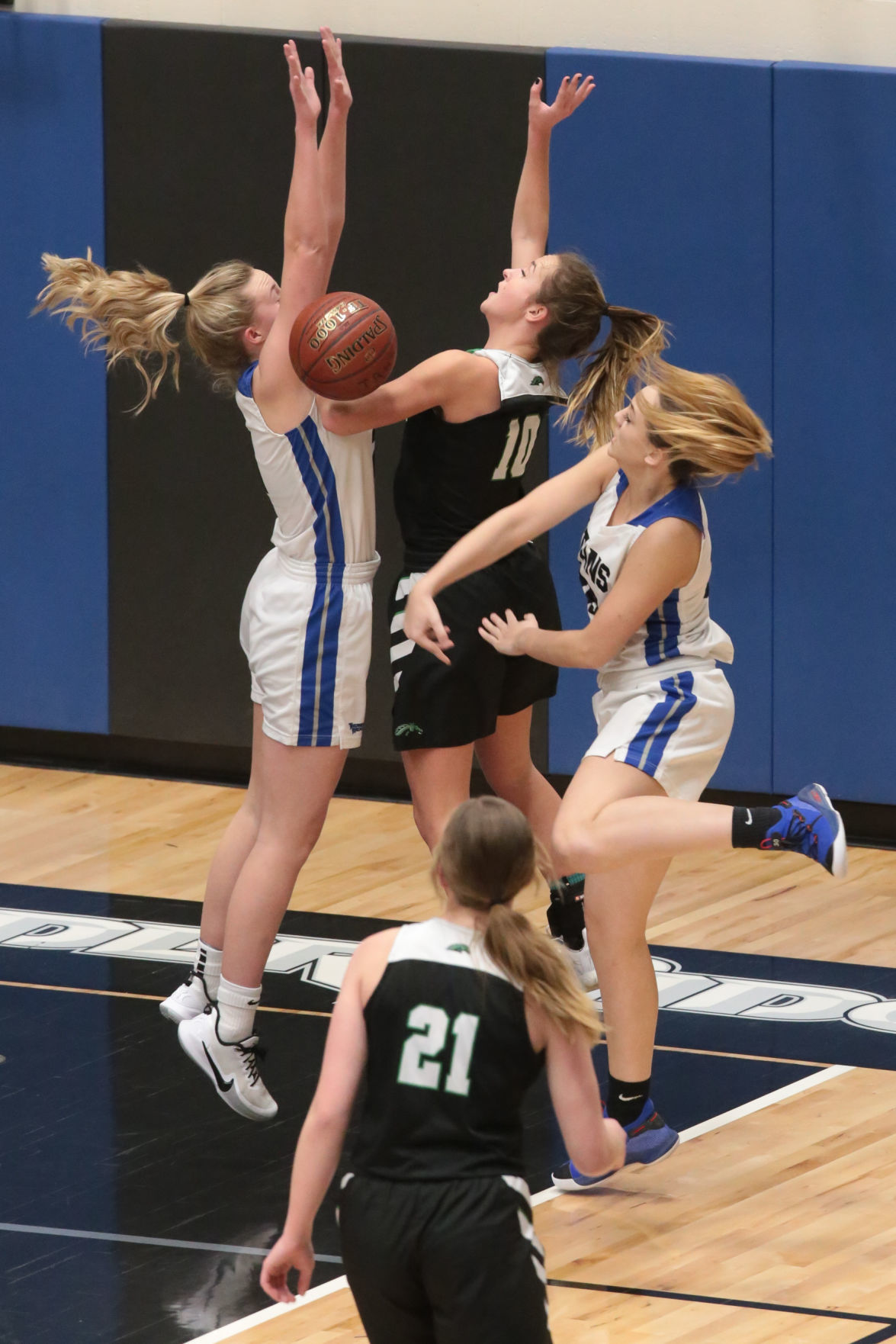 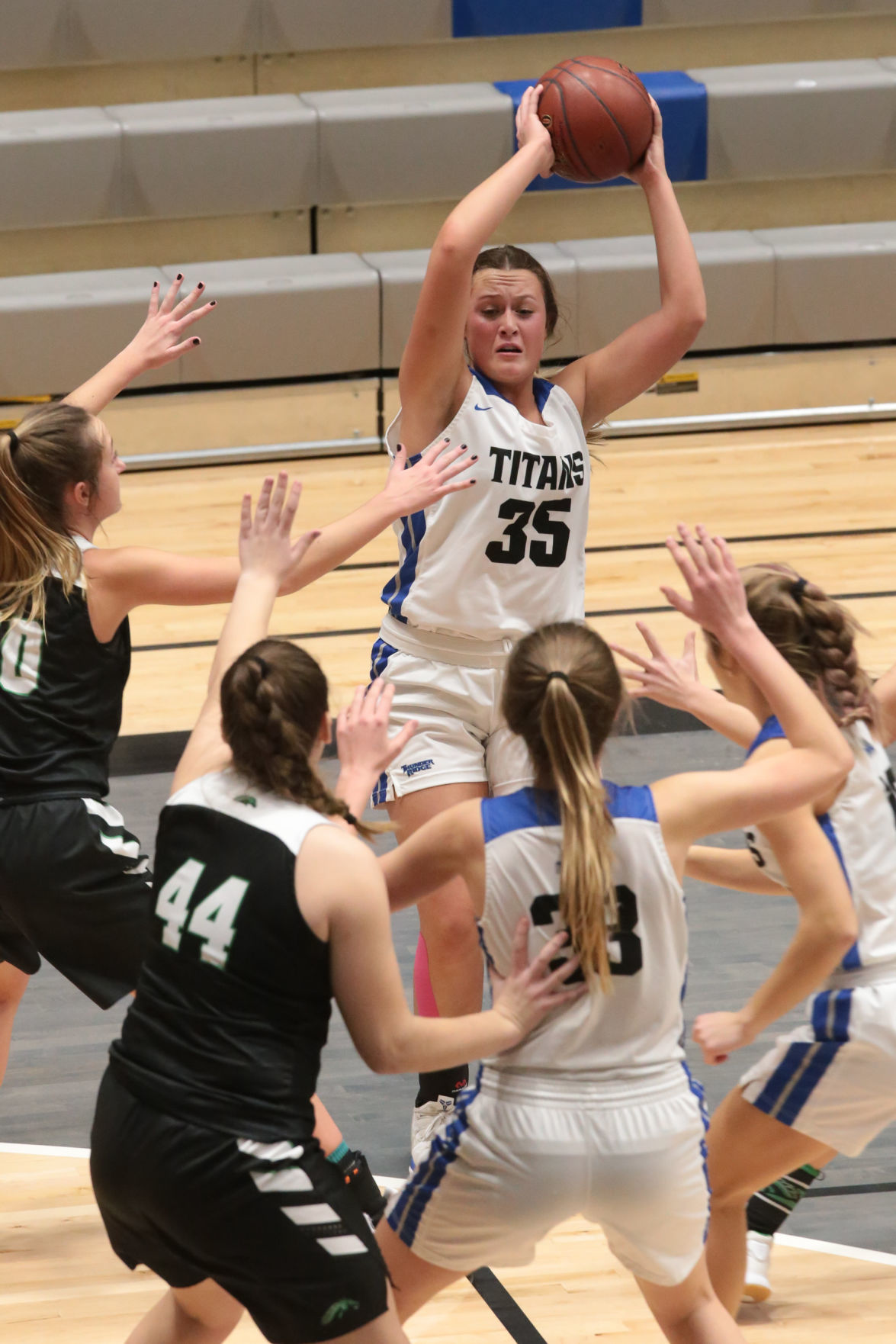 Thunder Ridge's Aspen Caldwell elevates for the shot during Wednesday's game versus Blackfoot.

The Blackfoot High School girls basketball team snapped a three-game skid and entered the win column for the first time in the New Year with a big road win Wednesday.

Propelled by five 3-pointers from sophomore Isabelle Arave, the Broncos defeated Thunder Ridge 47-38 to earn a regular season split with the Titans. Four of Arave’s 3s came in the second half, including a shot that hit nylon with six seconds left in the third quarter.

“I was bringing the ball down as point guard and I just shot it,” said Arave, who ended the night with a team-best 17 points and traded off as point guard with Tenleigh Smith. “My teammates were finding me open. My team did a great job of giving me open shots.”

Blackfoot head coach Courtnie Smith said Arave is a talented shooter, but her five 3s were a bit of a pleasant surprise.

“She hasn’t been shooting them as much for us this year,” Smith said. “It was great night for her. Defensively, teams have to be wary about her.”

The game was the second in 24 hours for the Broncos in a week that includes three games in four days. Tuesday night at home, they fell 52-38 to undefeated Bonneville in a conference contest between two state-ranked 4A teams.

Thunder Ridge junior Lauren Davenport had 10 points in a competitive first half, but it was the Broncos who took a 23-22 advantage at halftime. Blackfoot’s Tenleigh Smith gave the Broncos their first lead upon going 1-for-2 at the foul line at the 2:32 mark of the second quarter, and two more lead changes occurred before the half ended.

“We were coming off a huge loss, an emotional loss,” coach Smith said. “We were tired. It took us an entire half to get our feet under us.”

Arave hit 3-pointer No. 4 with 6:35 left in the game to stretch Blackfoot’s lead to 42-35, a score that remained unchanged until the 3:16 mark when Davenport completed a 3-point play. Arave concluded her night with 3-pointer No. 5 at 1:36 left and Tenleigh Smith iced the win with a 2-for-2 trip to the foul line in the final 36 seconds.

“We gave her way too much space,” Titans head coach Jeremy Spencer said of Arave. “I tip my cap to her. She was money.”

Davenport had a game-high 18 points and cut the Titans’ deficit to four points twice in the fourth quarter. Arave said the 5-foot-11 junior, who went 7-for-7 from the foul line Wednesday and is shooting 85-plus percent from the line this season according to Spencer, was the main focus of the Broncos.

“She’s so good,” Arave said. “We knew we had to get a hand in her face and have somebody on her all the time.”

Humpherys, who finished the game with four fouls, added 10 points for Blackfoot (10-4), who play Friday at Rigby. Three of those fouls were from guarding Davenport. Spencer had high praise for Humpherys, whom he said plays like a veteran for a top tier Blackfoot team.

“She plays like she’s a senior,” Spencer said. “She’s one of the best players in this area. She’s a great player and an even better young lady.”

Paige Clark had eight points, including six in the second half, for the Titans (11-5), who play Friday at Hillcrest.

Two ties already in this quarter. Blackfoot's Kristen Thomas made this to tie the game with Thunder Ridge at 27-27 at 4:17. #idpreps pic.twitter.com/4R2PDU8491

GBB end 3rdQ: Blackfoot 39, Thunder Ridge 31. Blackfoot's Hadley Humphreys, playing with three fouls, had six pts In the quarter including this bucket that sent her to the line. #idpreps pic.twitter.com/plyqqZjQQH

GBB final: Blackfoot 47, Thunder Ridge 38. Isabelle Arave, shooting here, made four 3s in the second half (five for the game) for the Broncos to finish with 17 pts by my count #idpreps pic.twitter.com/bswrl8Skuw