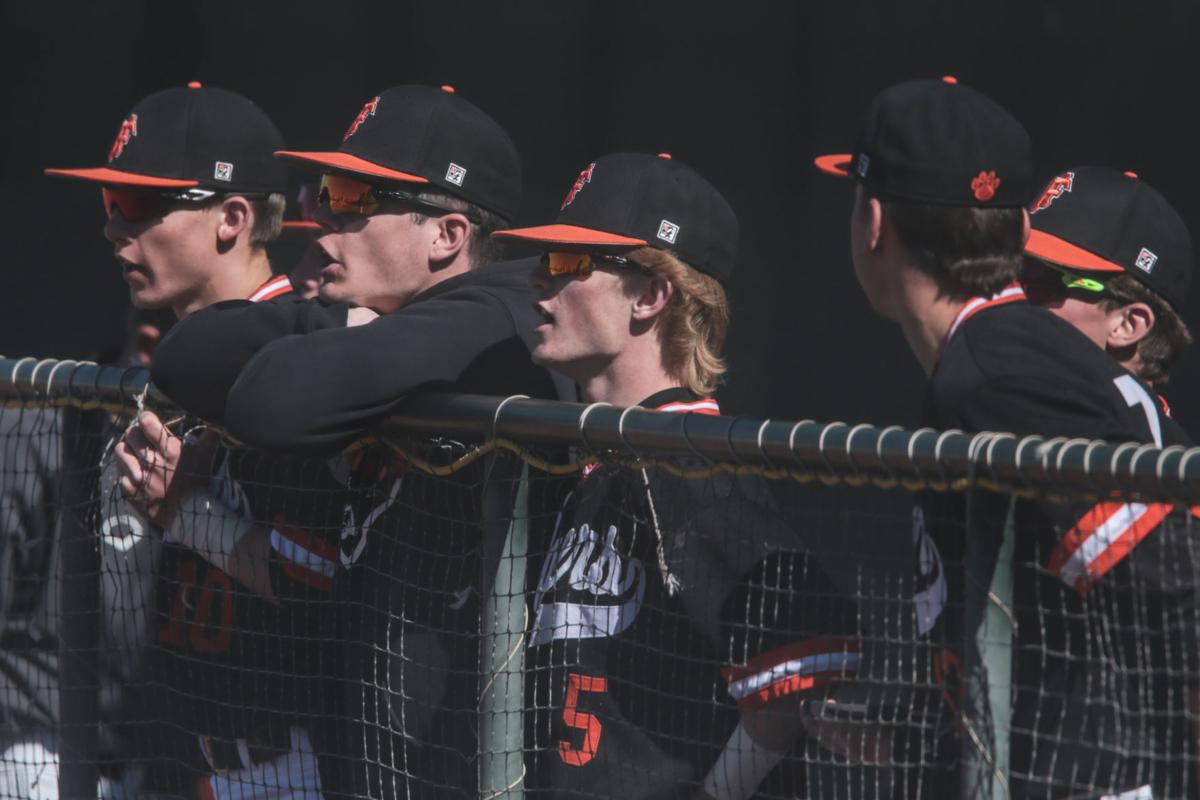 Players look on as Idaho Falls takes on Skyline at Melaleuca Field on Tuesday, April 20, 2021. 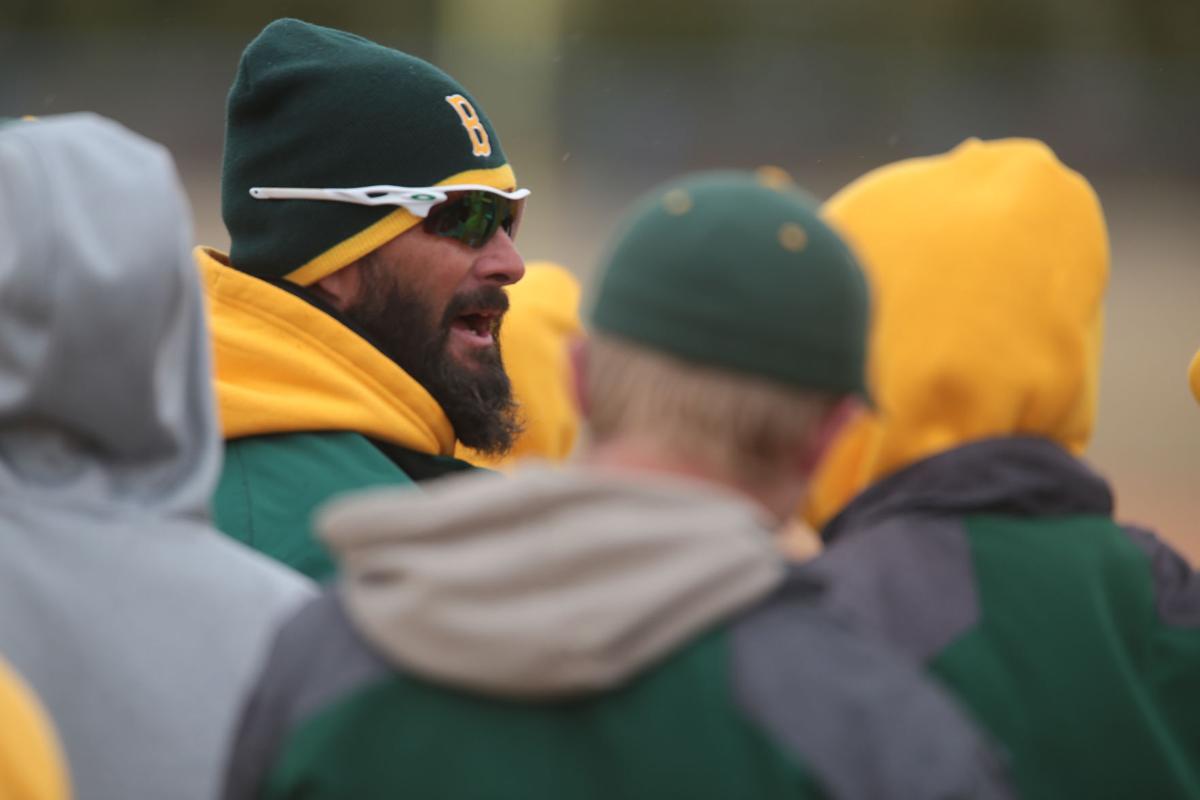 Bonneville coach Ryan Alexander talks to his team at a recent game.

Players look on as Idaho Falls takes on Skyline at Melaleuca Field on Tuesday, April 20, 2021.

Bonneville coach Ryan Alexander talks to his team at a recent game.

It wasn’t that long ago — two years to be precise — that baseball fans in Idaho Falls experienced a magical season as both Bonneville and Idaho Falls battled it out for 4A District 6 supremacy and eventually met in the state championship game.

Bonneville got the best of those matchups and celebrated a state title, but all was forgiven as the players came together that summer to form the Idaho Falls Bandits super team and went on to win the American Legion World Series.

Since then, the impact of COVID-19 has been well documented. Last year’s spring baseball season was canceled. No late afternoons at the ballpark, no chance at reviving the Tigers vs. Bees rivalry, no opportunity for repeats or redemption.

But 2021 was supposed to be different. The thrill of finally being back on the field and relishing in the competition and postseason chase has been long overdue.

“It’s just been good to get out on the field,” Bonneville coach Ryan Alexander said.

Even so, the COVID-19 impact still lingers.

As teams head into the second half of the new season, Idaho Falls and Bonneville are two examples of how a missed season carried over into 2021.

“Last year we would have had nine or 10 seniors,” Alexander said, noting most of those would have had valuable varsity experience. Another state title run was definitely a possibility.

This year’s Bees team has four seniors with limited experience, none of whom played on the 2019 championship team.

The current lineup is heavy with sophomores getting their first taste on the big team. So it’s been a challenge to field a consistent team day-to-day, Alexander concedes, but there is evidence of improvement from the youngsters.

While there’s a learning curve on the field for the young players, they’ve already missed out on an important part of the growing process.

Typically, the seniors would be the ones to show the freshmen and sophomores how the program works.

“One of the things they would do is set the tone and the expectations for the up and coming players,” Alexander said. “Like how we prepare ourselves for the game … We’ve had to learn on the fly there.”

“It’s been a bit of a struggle so far,” said Seth Walton, one of the four seniors on the Bonneville roster.

Walton was on the junior varsity squad in 2019 when the Bees won the state title, and he was excited to finally move up to varsity last year and go for a repeat. That didn’t happen, but players continued to work out in hopes of eventually returning to the field.

Walton played on the Bonneville American Legion A team this past summer.

Even with a relatively young roster, Alexander said the expectations haven’t changed. It’s always been about giving yourself a chance to win the game in front of you, he said, while acknowledging the sophomores have been put in a position that they have to learn on a daily basis.

Meanwhile on the other side of town …

“We have a ton of depth,” Idaho Falls coach Trent Johnson said.

Unlike Bonneville, Idaho Falls didn’t lose a lot of seniors from last year and features a solid class of juniors and seniors this season.

Idaho Falls, which moved up to 5A this year, is 16-3 and appears to be hitting on all cylinders despite some earlier injuries.

“I knew our team was really special, and if we put the pieces together I knew we would win a lot of games,” Sorenson said.

Sorenson noted that being able to play American Legion ball with the Bandits this summer helped overcome some of the disappointment of missing the high school season in the spring.

“It’s been a rollercoaster,” Bridges said. “Especially last spring, never really knowing what was going to happen. This whole past year we just tried to stay ready because we never knew when we’d be able to play again.”

The Tigers and Bees played a non-conference game two weeks ago. Idaho Falls won the matchup 14-2. With the teams now playing in different conferences, the end result didn’t have the urgency of a bitter rivalry game, but if conclusions can be drawn from one game, here they are.

Idaho Falls looks like a team ready to challenge for a 5A state title. Bonneville is still trying to put all the pieces together.

That’s not necessarily a bad things for the Bees, Alexander said. Expectations were that there would be growing pains this season. The hope was that those would be few and far between as the season progressed.

Entering the weekend, the Bees have won three of their past four games and won a series against Hillcrest to improve to 7-8.

“We’ve seen glimpses of some very good things,” Alexander said, adding that there’s no 'Wait until next year' mentality. “Our goal is to be playing our best baseball when the district tournament comes around.”