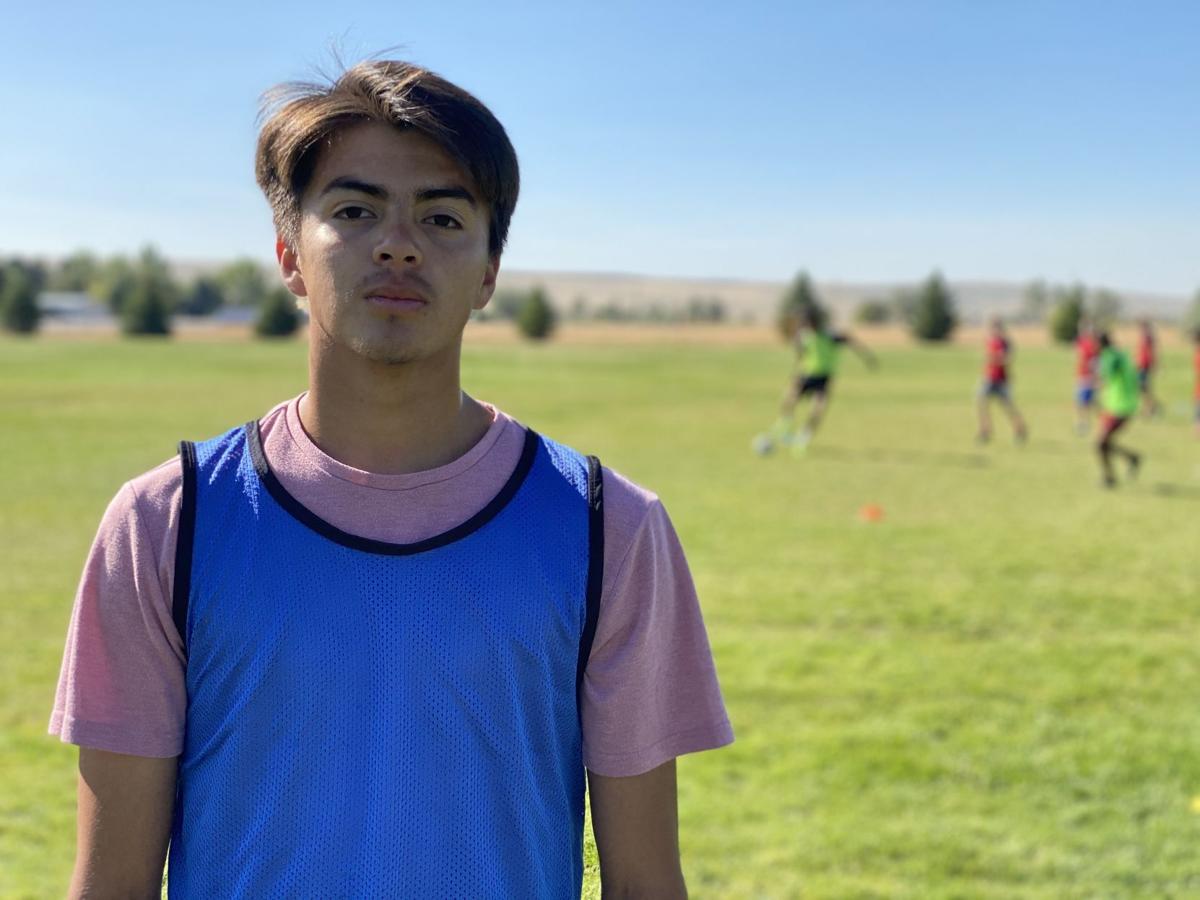 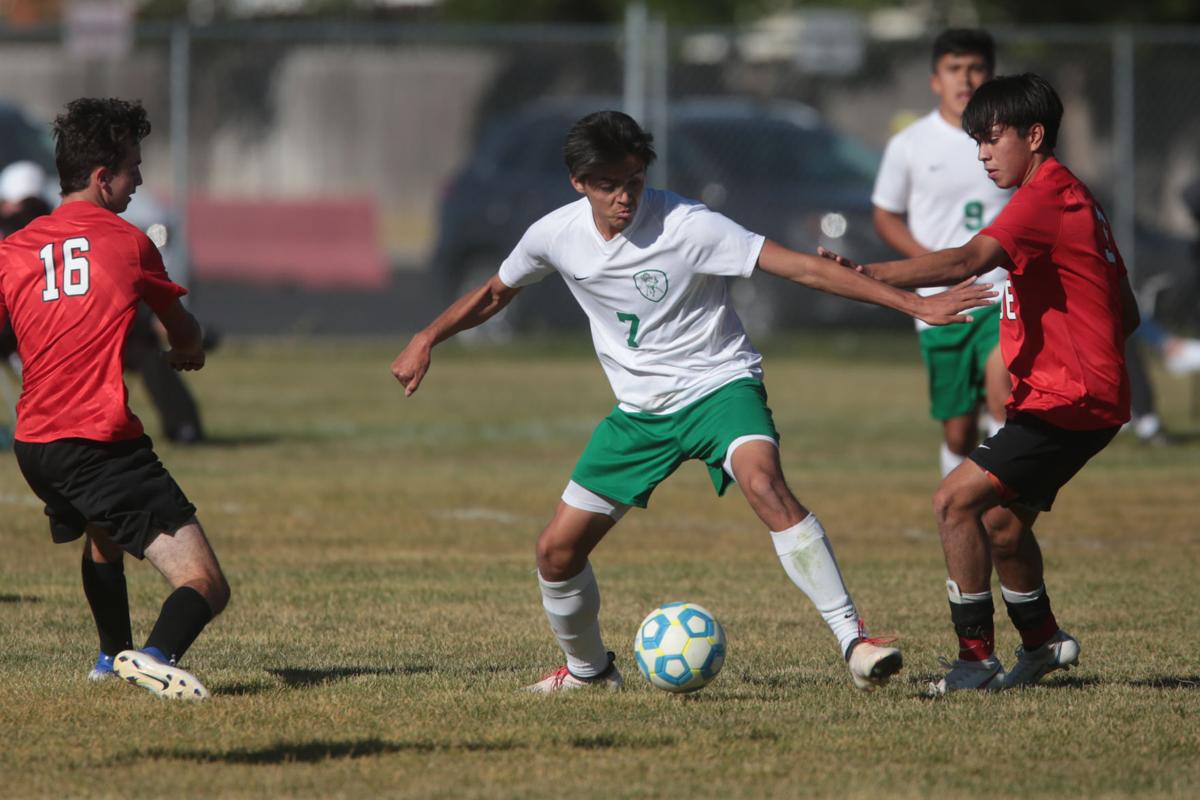 Blackfoot’s Frankie Garcia works the ball past Hillcrest defenders during a game earlier this season.

Blackfoot’s Frankie Garcia works the ball past Hillcrest defenders during a game earlier this season.

Talk to those closest to Frankie Garcia and you find out pretty quickly about the guy’s easygoing nature. Blackfoot’s senior star, all lanky 6-foot-1 of him, laughs a lot. Loves to crack jokes.

He loves to create them, too.

Earlier this season, when Blackfoot players sent in order forms to receive gear like warmup pants and shirts, they had to attach their names to the order. Everyone on the roster, naturally, used their normal name.

Except Garcia. The name he used: Frankie “DaGoat” Garcia.

Pope was careful to add context here, though.

“He’s not being cocky, arrogant or a fool,” Pope said. “He’s doing it just for humor. That’s him. That’s funny, you know what I mean?”

Here’s the important part: Garcia’s personality may be funny, but nothing about his game is.

A four-year varsity starter whose brothers and sisters also play, Garcia has developed into one of the best players in the area, in District 6 and elsewhere. He’s quick, which helps him dice up defenses, but also composed, which helps him stay calm while doing it.

The results come in bounties. He’s usually good for one goal a game, maybe two. In fact, through Blackfoot’s eight games this season, Garcia has only failed to score in one, which was a loss to Thunder Ridge.

Funny how that works.

“The bottom line,” Pope said, “is that comes from practice, knowing your craft and ability. Having the skills — but practicing to make sure your skills count. I know every coach in America will say that, but it’s true. You don’t have that level of consistency unless you are building your own skill level, unless you take your practice seriously.”

Garcia takes practice seriously. Earlier this season, he struggled in the shooting department in a win over Idaho Falls, so after a later practice, he approached Pope.

“Liam,” Garcia said, “Can we do some shooting practice?”

Pope obliged. After that practice, Garcia stayed behind and got some extra shots in.

Correlation doesn’t equal causation, but good luck arguing with the results. Since then, Blackfoot has won three of its last four games. The Broncos are 7-1-0 and 2-0-0 in conference play.

“You appreciate that from a player who wants the extra, would be willing to stick behind if you need him to,” Pope said. “You just like that. You admire that from a kid. He knows what he needs, and he wants to do it.”

For his part, though, Garcia shook off any credit.

“I don’t know if it’s consistency,” he said. “My teammates play really good balls in and whenever I get a good one, I try to make the most out of it.”

It’s a good thing his teammates know Garcia so well, because not too long ago, they had to learn to play without him.

Before the 2019 season, when Blackfoot was competing in a friendly jamboree with Thunder Ridge and Century, Garcia got tangled up with an opponent and fell. The angle was unfortunate as he fell on his neck area.

When Pope walked onto the field to check on his star player, Garcia sat up.

“I broke my collarbone,” Garcia said.

Pope felt skeptical, but soon, he took a closer look.

“Sure enough, you can see it’s depressed,” Pope said. “He knew immediately.”

“It went numb for a second,” Garcia added. “I could just feel it crackling once I walked. It didn’t really hurt much, but you could tell it was broken.

“I knew right away.”

That injury sidelined Garcia for the first 12 games of the season, over which the Broncos posted a 5-7 record. At one point, Blackfoot lost three straight, and five of six. All Garcia could do was watch.

When Garcia returned, in a home contest against Shelley, he didn’t start — but he did score two goals.

In Blackfoot’s district tilt against Bonneville, Garcia fell. On his collarbone.

He was out for the rest of the season.

“I got a little emotional,” Garcia said. “When I broke my collarbone the first time, I was kind of fine with it, because I knew I would come back later in the season. The second time I broke it, I wasn’t very happy about it. I was kind of mad, because I wouldn’t be able to finish the season.”

That was last October, though. These days, Garcia is healthy as ever — knock on wood — and the Broncos are reaping the benefits.

“He’s tall and quick, and (he has) skill on the ball,” Hillcrest coach Ryan Ellis said. “He’s shifty with his body, so when you’re defending him, he’ll lure you in to try to stab at the ball, and then he’ll beat you. So you’ve got to be really disciplined when you’re marking Frankie.”

Doesn’t hurt that he doesn’t take himself too seriously, either.

Pope trailed off for a second.