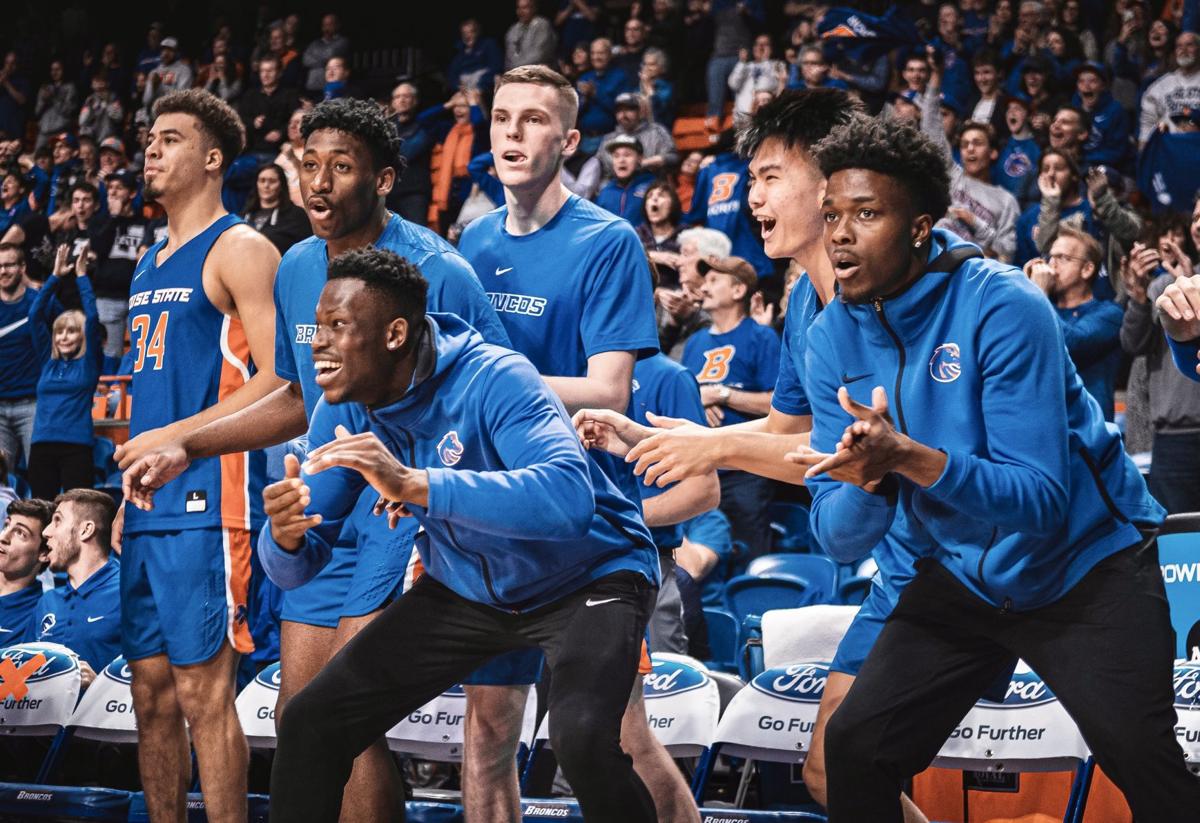 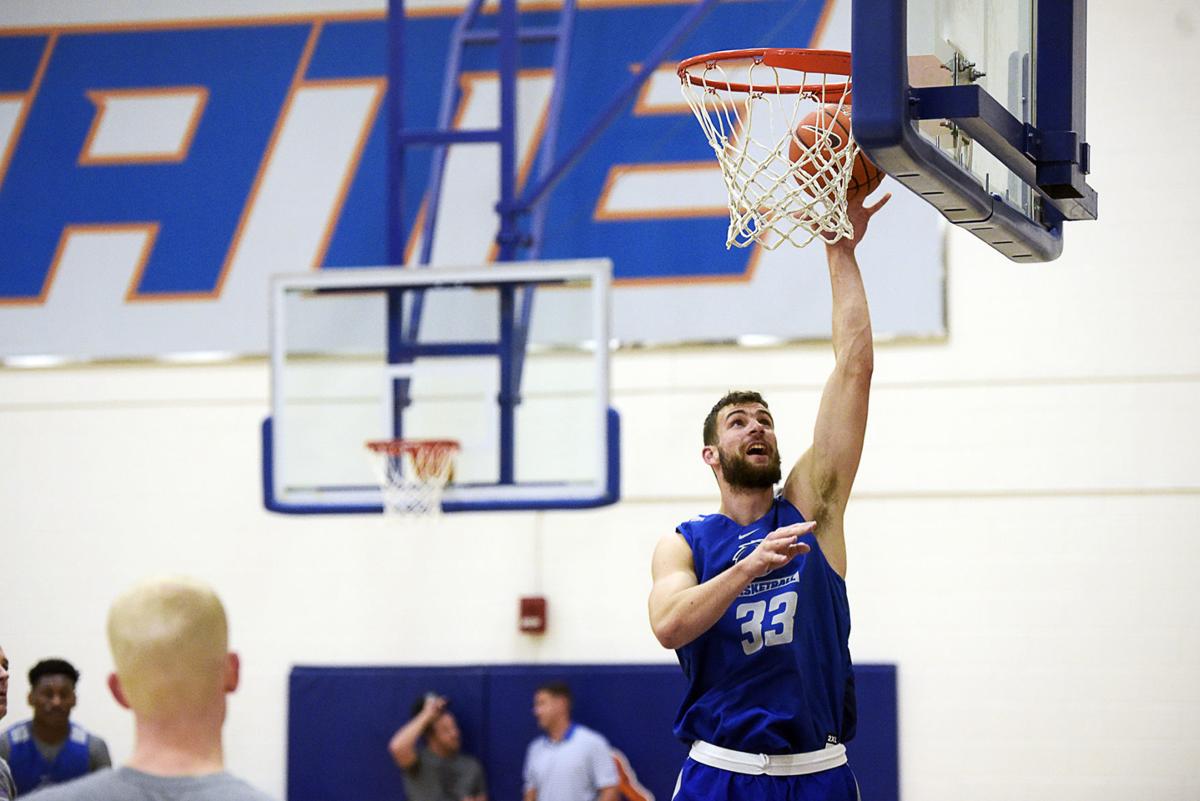 Boise State junior Mladen Armus (33) goes in for a layup during the men’s basketball team’s first day of fall practice on Tuesday, Sept. 24, 2019, at Boise State University in Boise. 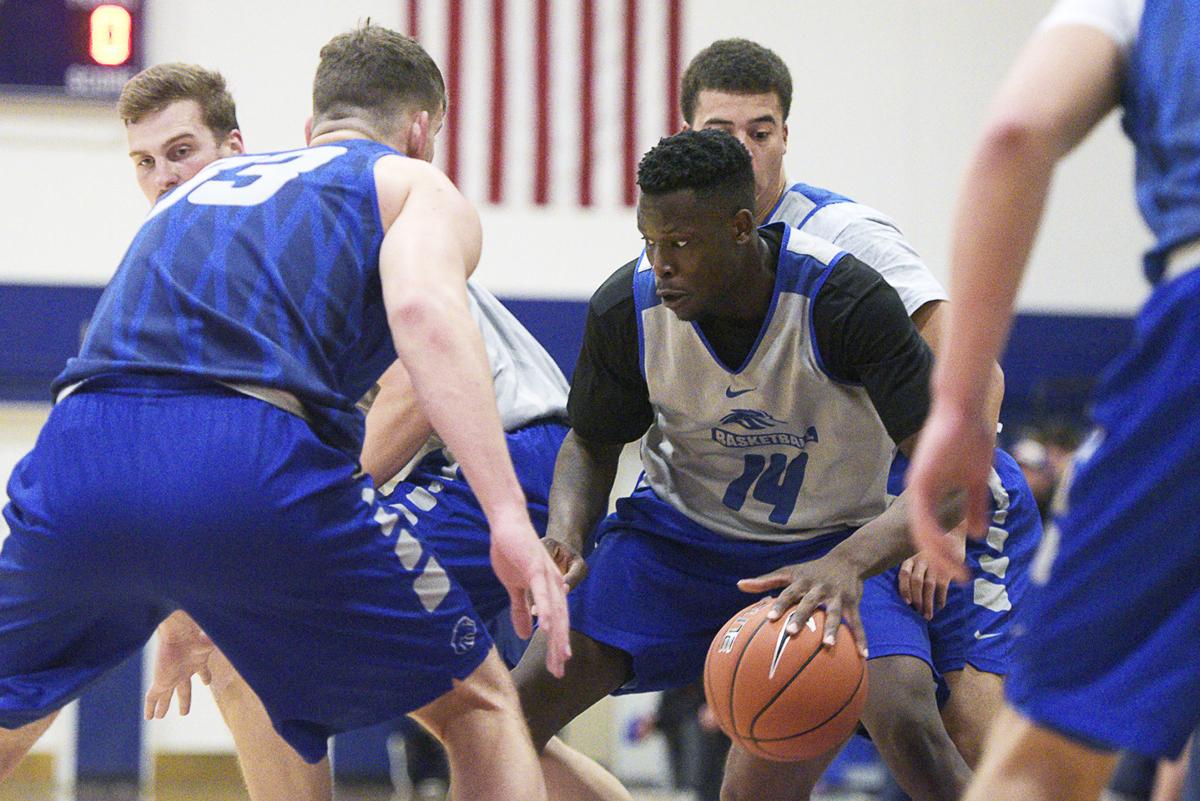 Boise State redshirt junior Emmanuel Akot (14) dribbles into the lane during a scrimmage on Oct. 12, 2019.

Boise State junior Mladen Armus (33) goes in for a layup during the men’s basketball team’s first day of fall practice on Tuesday, Sept. 24, 2019, at Boise State University in Boise.

Boise State redshirt junior Emmanuel Akot (14) dribbles into the lane during a scrimmage on Oct. 12, 2019.

BOISE — Leon Rice has no problem with those who say next year’s roster will be the most talented in program history. The Boise State men’s basketball coach knows expectations will be sky high, and he’s fine with that too.

He’s been planning for it.

The Boise State men’s basketball team will have a completely different look next season as four Division I transfers become eligible. The group includes a pair of four-star, top-100 national recruits as well as two veterans with proven production at previous schools.

Add in the return of Oregon transfer Abu Kigab, guards RayJ Dennis and Max Rice and potentially leading scorer Derrick Alston, and the Broncos appear to have a roster that has a real shot at winning the Mountain West and getting to the NCAA Tournament.

“I have a group that’s even more excited than we’ve ever been,” Rice told the Idaho Press. “We can’t wait to get through all this stuff we’re working with now and get back to normalcy and going to the gym and working with these guys and playing basketball.

“We’ll have a lot of ability. We’ll have an older group that’s been through a lot of stuff.”

Boise State loses the best 3-point shooter in Mountain West history in Justinian Jessup, as well as contributors Alex Hobbs, Marcus Dickinson and Robin Jorch. RJ Williams will be hard to replace after he averaged 12.2 points and 8.9 rebounds despite being undersized in the post.

But with their departures comes a new era of Boise State basketball, and a new sense of optimism.

Boise State adds a pair of highly-touted Arizona transfers in Emmanuel Akot and Devonaire Doutrive. The 6-foot-8 Akot was the No. 43 ranked player in the 2017 recruiting class by ESPN, while the 6-foot-4 shooting guard Doutrive was ranked No. 72 by ESPN in the 2018 class. They will be the two highest-ranked prospects (as high schoolers) ever to play for the Broncos, surpassing Chandler Hutchison (No. 80 by ESPN in 2014).

Akot expected to get immediate eligibility last year after transferring from Arizona, but had his waiver request denied by the NCAA. He instead sat out the season and redshirted for the Broncos, and will have two years of eligibility starting next season.

“I felt like I deserved to play, but not much I could do about it,” Akot said. “Since then, I’ve seen the benefits of redshirting. I got a lot stronger, more athletic, my shooting got a lot better. I’ve seen some positives from it.”

Doutrive is currently slated to become eligible after the first semester in December, but said he’s confident he will get a waiver to be eligible at the start of the season.

“Next year is going to be the transfers’ moment,” Doutrive said. “We know how much work we’ve put in and we feel like we’ll have a great group of guys next year. We’re all playing for that one goal, to win the Mountain West next year.”

All four transfers are likely to jump immediately into the starting lineup for the Broncos.

“I just love their mentality,” Rice said. “It would be one thing if they were all sitting out and had the wrong mentality, but these guys all like to work. They are humble and hungry and ready to go. They are ready to go play, and that’s really, really exciting because they are all talented and care about each other and they all want to win.”

Rice said it should be a seamless transition to add the four transfers into the mix at once because they all played together this past year on the scout team.

“I think the challenge has been helped because they were all in the program for a year, they know what we’re about and they’ve worked and grinded,” Rice said. “They have a humility about them. I mean Akot and those guys were carrying the bags for the guys when they traveled with us on the road. The work ethic and humility those guys have is remarkable.”

Kigab and Dennis were starters for the Broncos at the end of this season, but both will likely come off the bench to start next year. That alone says a lot about the talent and depth the Broncos figure to have on the roster. Max Rice will return as a shooter off the bench, while the Broncos also add a talented junior college player in Naje Smith from Cochise College in Arizona.

The big question centers around Alston, who is contemplating an early jump to the NBA after leading the Broncos with 17.3 points per game as a redshirt junior. He likely would be a second-round pick at best this year, but could improve his stock and be a first-round pick should he come back for his senior year.

Alston is expected to at least test the NBA waters by declaring for the NBA Draft, similar to what Chandler Hutchison did a few years ago. Hutchison did a few workouts with teams before pulling his name from the draft and returning to school for his senior year.

It would make sense for Alston to at least put his name in the pool and gain feedback on his stock, but who knows if teams will even have workouts — or if the draft will even happen as scheduled in June — with the NBA season still on hold due to the COVID-19 outbreak.

If Alston returns, the Broncos would appear to be good enough to land in the top-25 at some point in the season. The NCAA Tournament wouldn’t just be a goal. It would be the expectation.

“You look at the years we’ve had high expectations before and we lived up to them,” Rice said. “We’ve won the league, we’ve been in the top three in the league almost every year. When we have good teams and a good program, you want to have expectations like that. That never bothers us. That’s what we like. We can’t wait.”