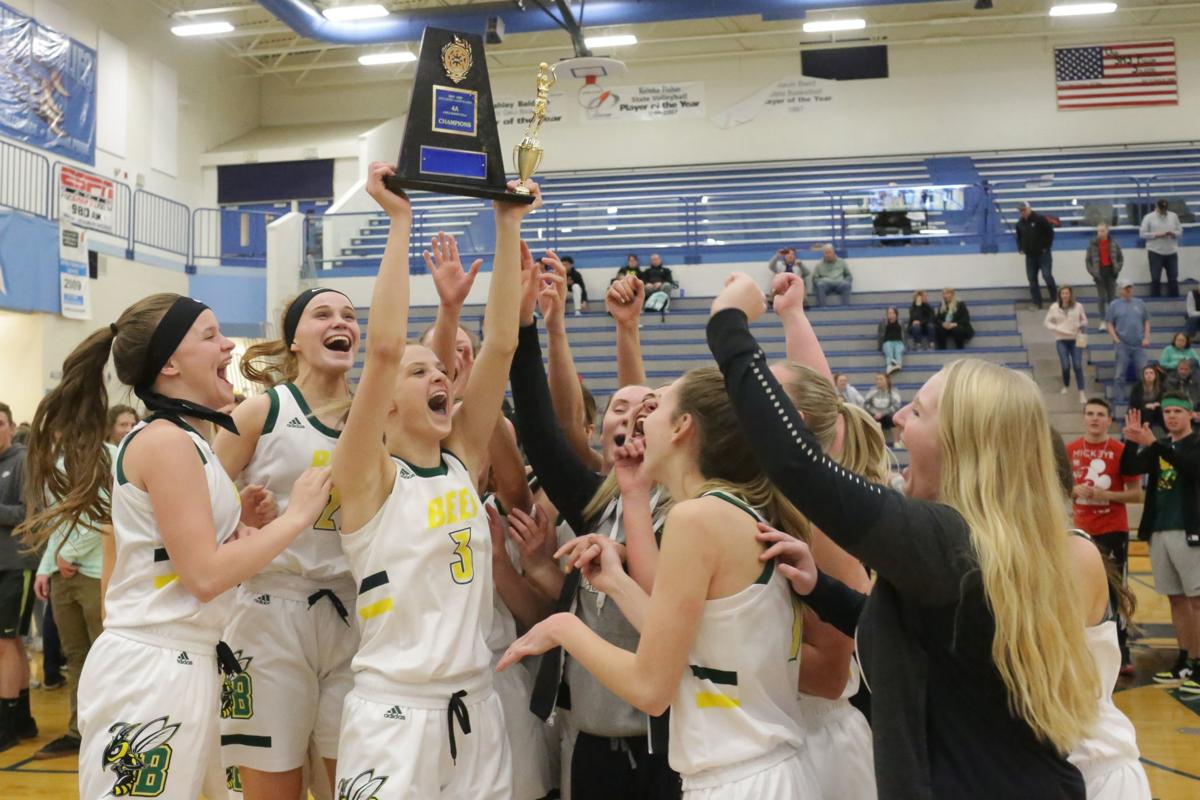 Bonneville players cheer and raise the 4A District 6 championship trophy after defeating Blackfoot 61-40 on Thursday at Skyline High School. 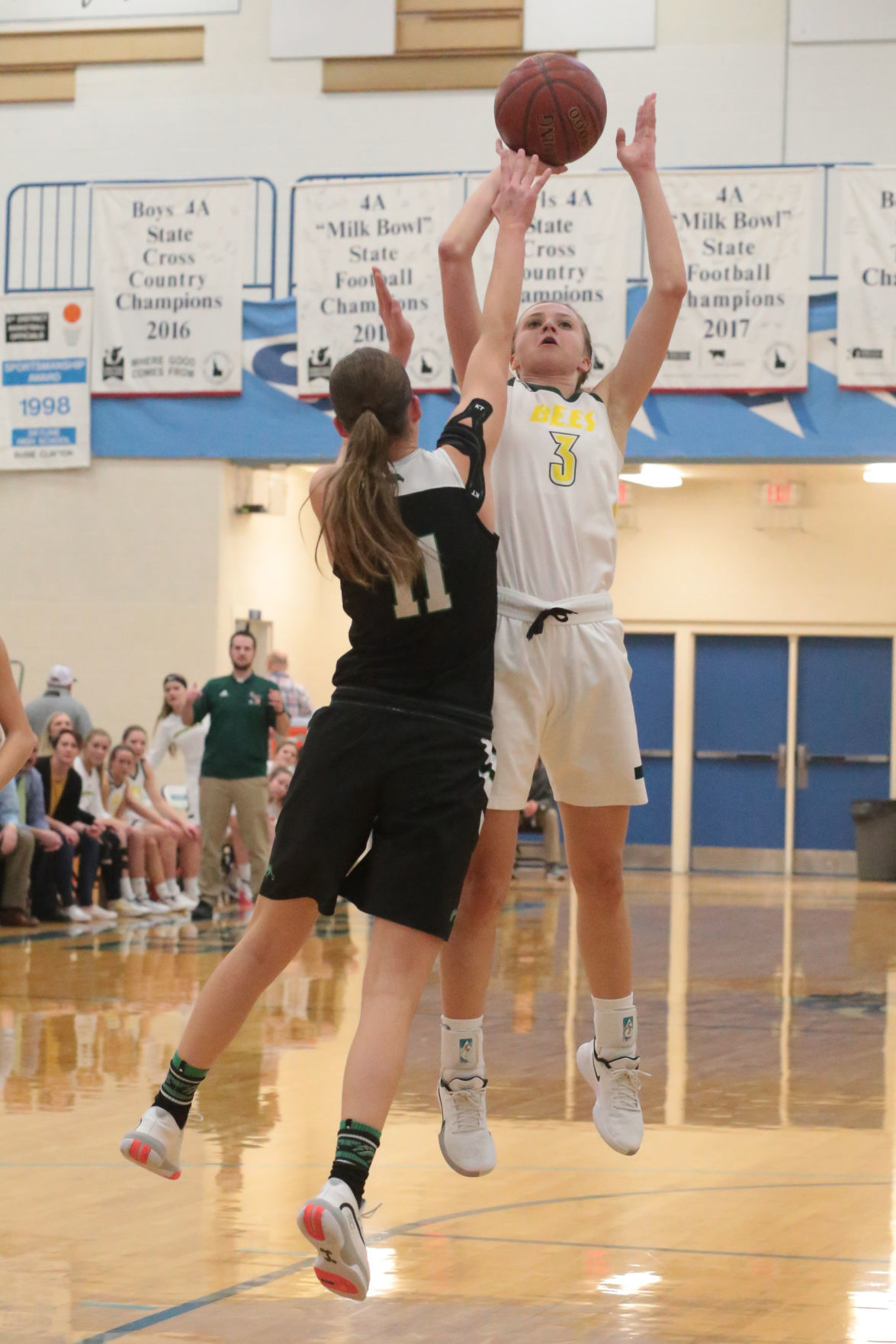 Bonneville’s Sadie Lott goes up for the shot during Thursday’s 4A District 6 girls basketball title game versus Blackfoot at Skyline High School. 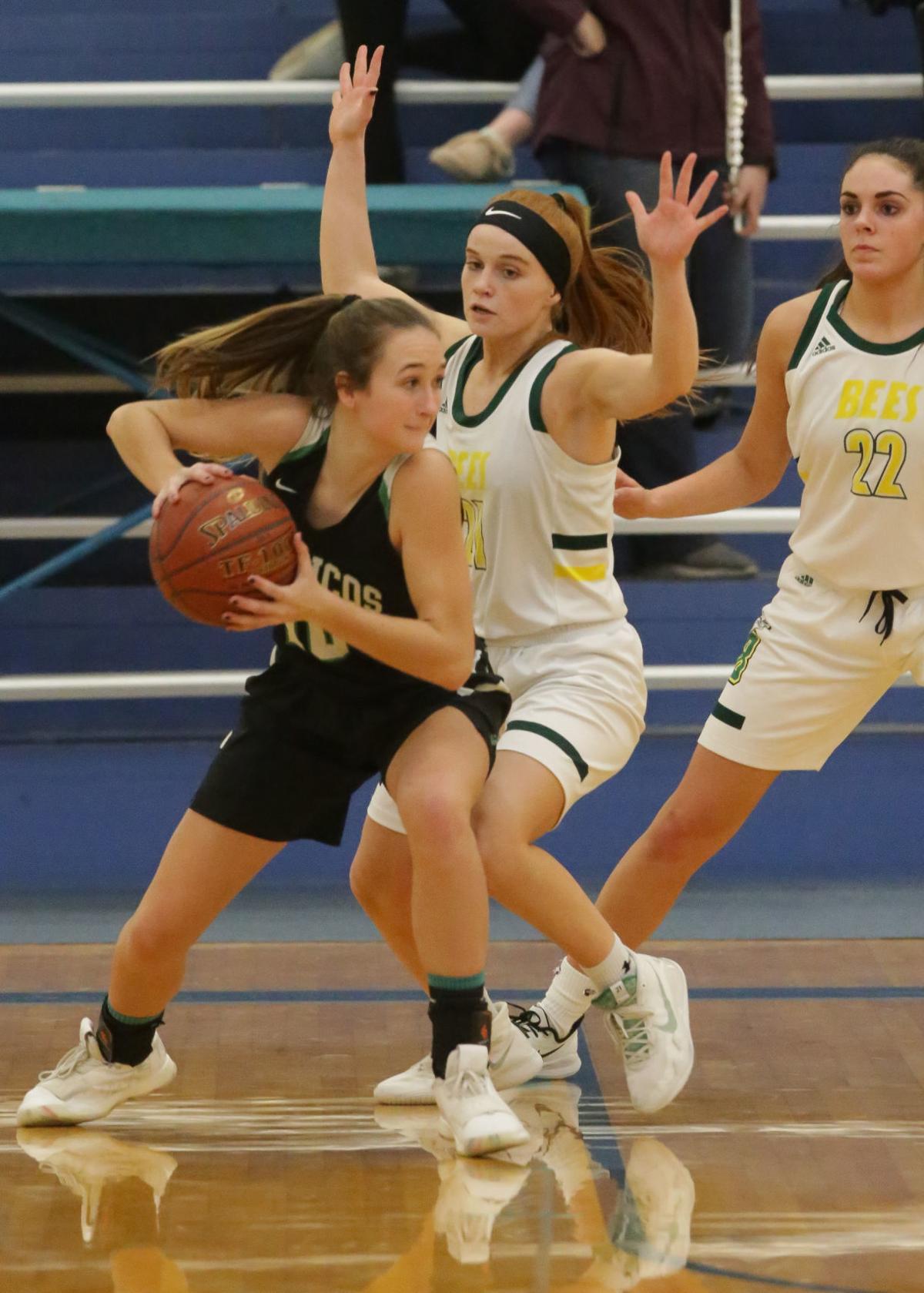 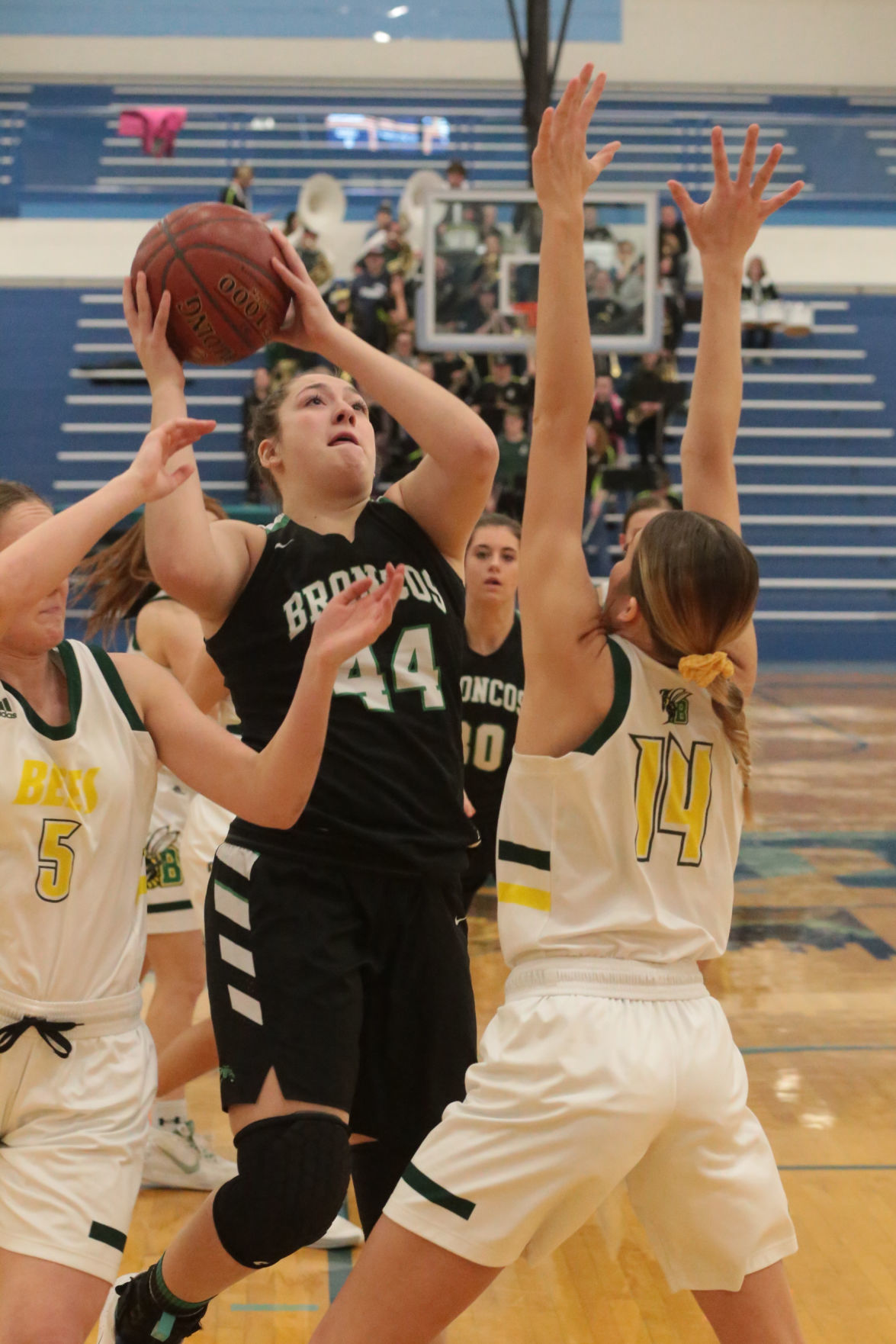 Bonneville players cheer and raise the 4A District 6 championship trophy after defeating Blackfoot 61-40 on Thursday at Skyline High School.

Bonneville’s Sadie Lott goes up for the shot during Thursday’s 4A District 6 girls basketball title game versus Blackfoot at Skyline High School.

The celebrations for the Bonneville High School girls basketball team carried on long after the trophy and medal presentations, taking photos, and ascending a ladder to cut down the net.

The Bees took the trophy and net into the locker room with them Thursday evening after defeating Blackfoot 60-41 for the 4A District 6 championship at Skyline High School, preserving the moment as a team before returning to meet their families in the gym. The win gives the Bees their first district title since 2018 and first at the 4A level since 2010, moved them 24-0 and sends them to next week's 4A state tournament as the top seed from District 6.

The win came after making numerous substitutions and tweaking the starting lineup due to senior starter Brooklyn Cunningham suffering the second ACL tear of her career in Monday's semifinal versus Skyline. Eight players got in the game for the Bees, and seniors Sadie Lott and Sage Leishman scored 19 points each.

"We knew we had to step up in this game, especially since we knew this was for the district championship," Lott said. "Everyone was solid at playing their roles."

Thursday was a redemption moment for two state media poll ranked teams. A year ago, Bonneville and Blackfoot were also the No. 1 and No. 2 seeds, respectively, for the 4A District 6 tournament, but neither reached the title game. Blackfoot ultimately reached its first 4A state tournament in 14 years by winning elimination games and a state play-in game, ending the season with the 4A state consolation trophy. The Bees missed state, however, after an undefeated regular season.

This year's team, which has nine seniors and numerous returners from last year, has played with the mantra of 'next play,' Lott and first-year head coach Ryan Erikson said. Blackfoot's defense dictated the first quarter of Thursday's contest, and the Broncos took the lead for a two-minute stretch as Kristen Thomas and Gracie Andersen went to work. The Bees rallied to end the quarter up 10-7, stretched the advantage to 28-15 at halftime thanks to 12 points in the second quarter from Lott and led by at least 11 the rest of the night.

"In every game, we break it into every four minutes," Erikson said. "The last four minutes of the second quarter, we went on a 12-2 run."

With no Cunningham, Erikson told the Bees they had to make up 10 points somehow. Enter Leishman, who scored all but two of Bonneville's 10 first quarter points, tied the game at 7-7 with 2:13 left in the first quarter and ended the night hitting four of her team's five 3-pointers.

"That was her best game in the biggest moment," Erikson said. "Blackfoot made adjustments that left her open and she stepped up and hit them. Not to mention she played great defense."

Leishman said she entered Thursday nervous. Once she took her coaches' advice to heart, those nerves faded.

"I've been struggling with thinking too much about my shooting," Leishman said. "My coaches told me to stop thinking about it and I guess it worked."

As was true in their Jan. 28 regular season meeting at Bonneville, both teams had to make adjustments due to fouls piling up on their starters. Bonneville's bench exploded when senior Hannah Harker subbed into the game and was fouled after hitting a 3-pointer to bring the Bees' lead to 39-24 with less than three minutes left in the third quarter.

"All eight (who played) contributed," Erikson said. "These girls are so amazing. They make me look good."

Hadley Humpherys had nine points while Tenleigh Smith, Kianna Wright and Thomas each added six for Blackfoot (18-8), which begins the 4A state tournament on Thursday versus defending 4A state champion Century at Timberline High School in Boise. The Broncos and Diamondbacks also met in last year's opening round, with Blackfoot putting Century on the ropes before falling 45-42. Blackfoot coach Courtnie Smith was keeping up with the 4A District 4-5 title game between Burley and Century on her phone and knew before leaving Skyline that the Broncos would face the Diamondbacks.

"We feel confident about playing them again," she said. "Especially having been there before, we know how important that first round is."

Coach Smith added that the Broncos were tired entering Thursday having played five games in seven days, but she had high praise for her team as well as the Bees and the level that 4A District 6 has reached the past two seasons.

"It shows how talented our district is," Smith said. "I think Skyline could have been there (at state). (Bonneville's) a great team. Hopefully, we'll see them on (state championship) Saturday."

Lott and Leishman were sophomores on the 2018 5A District 5-6 championship team, and they said Thursday brought about a different kind of joy. For as much praise as Erikson had for the Bees, Lott and Leishman had equal praise for him.

"This is so awesome," Lott said. "I'm kinda sad we only have one year with him. I wish we had more."

"This has been my most favorite season," Leishman added.

4A District 6 girls basketball championship game, end 1stQ: Bonneville 10, Blackfoot 7. Blackfoot is playing amazing defense. Sage Leishman has 8 pts for the Bees and hit this 3 at 2:13 to tie the game #idpreps pic.twitter.com/CgHfWQfKIv

Check out photos from Thursday's 4A District 6 girls basketball championship game between Blackfoot and Bonneville at Skyline High School.