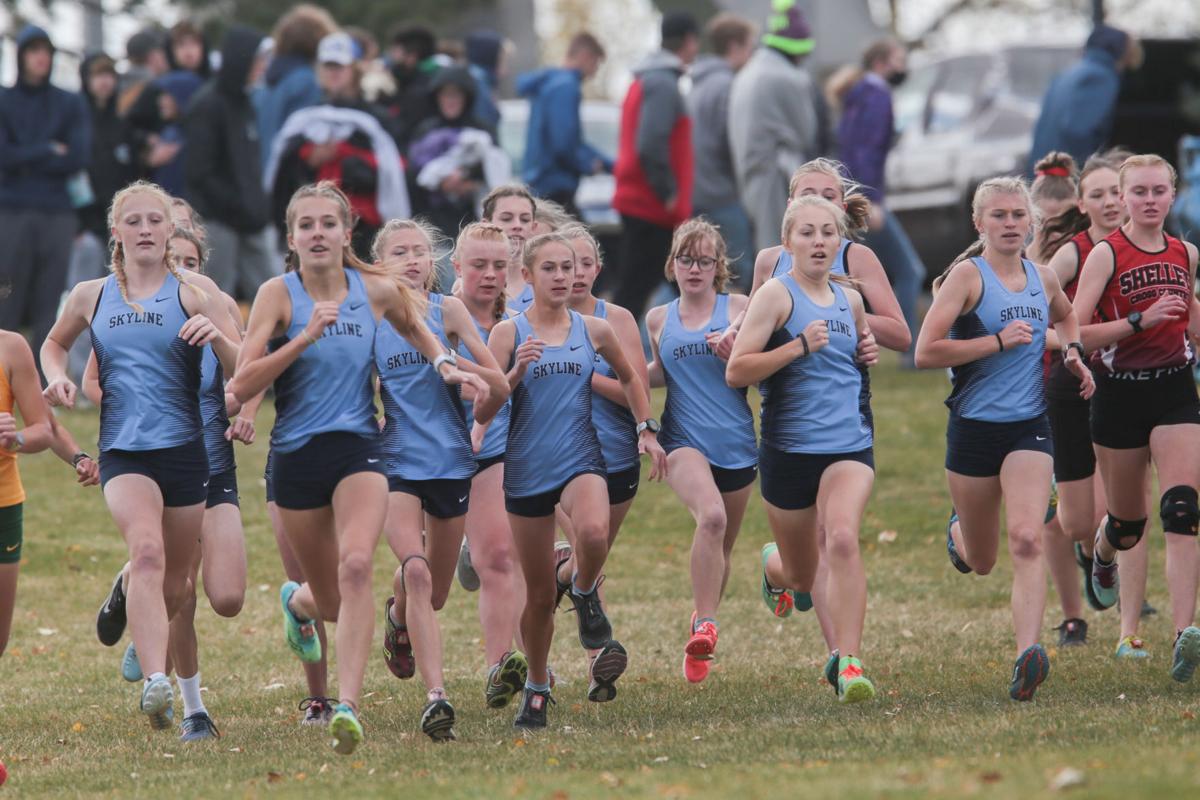 The Skyline girls team starts the 4A District 6 cross-country championships at Russ Freeman Park on Wednesday. 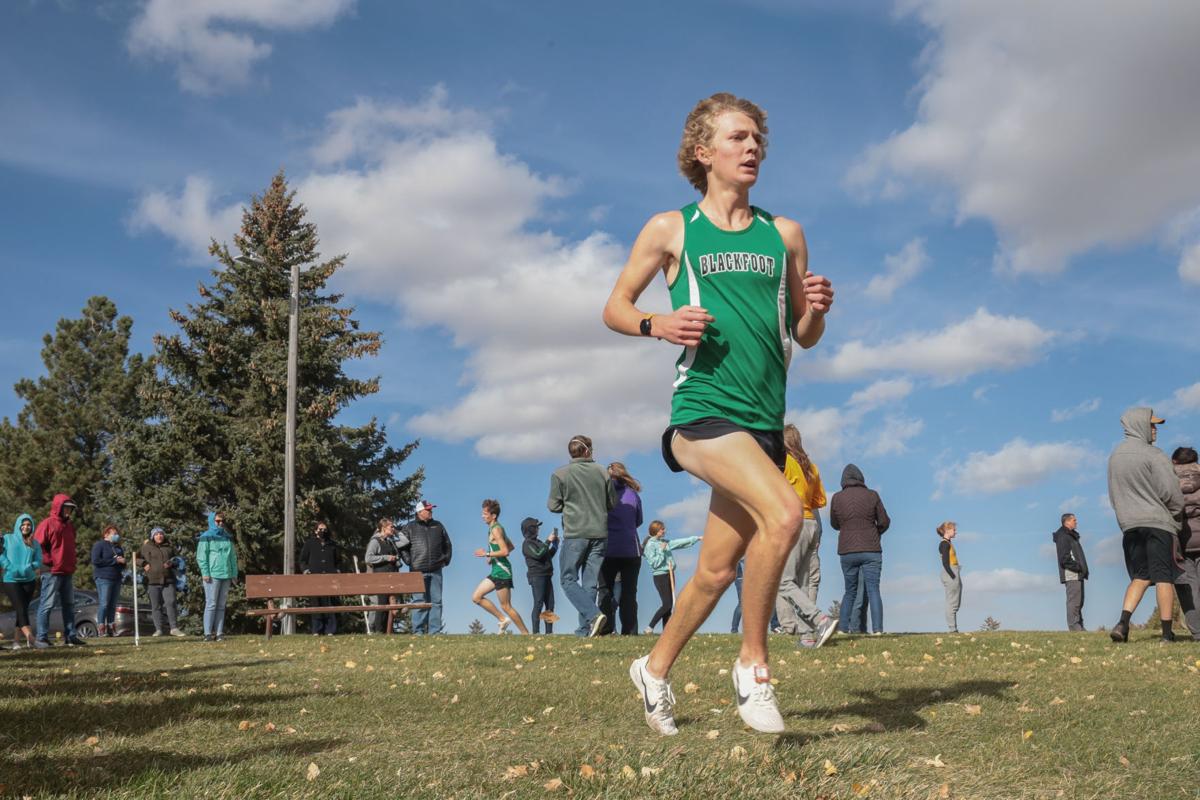 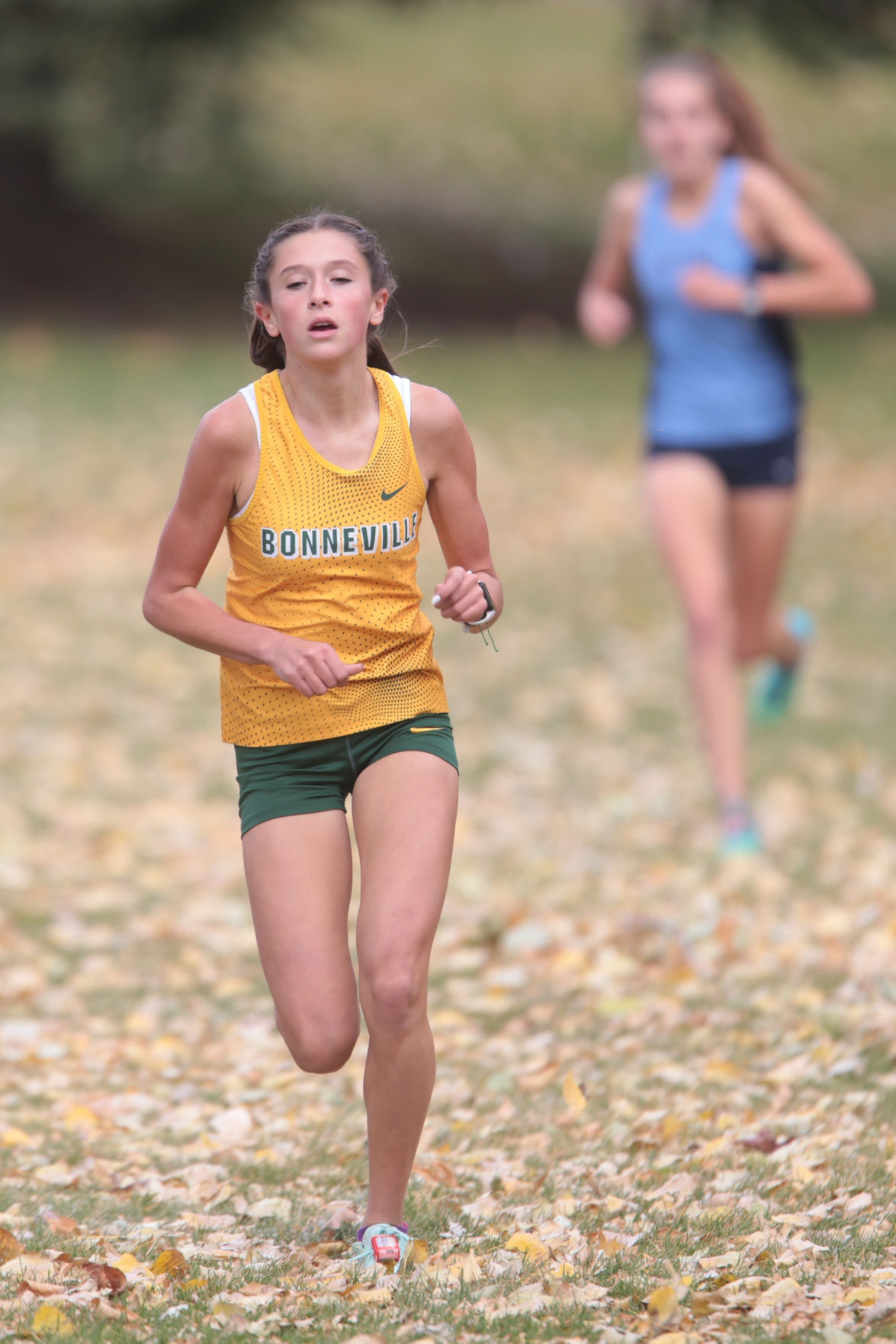 Bonneville’s Alivia Johnson clocked 18:54.12 to win the 4A District 6 title 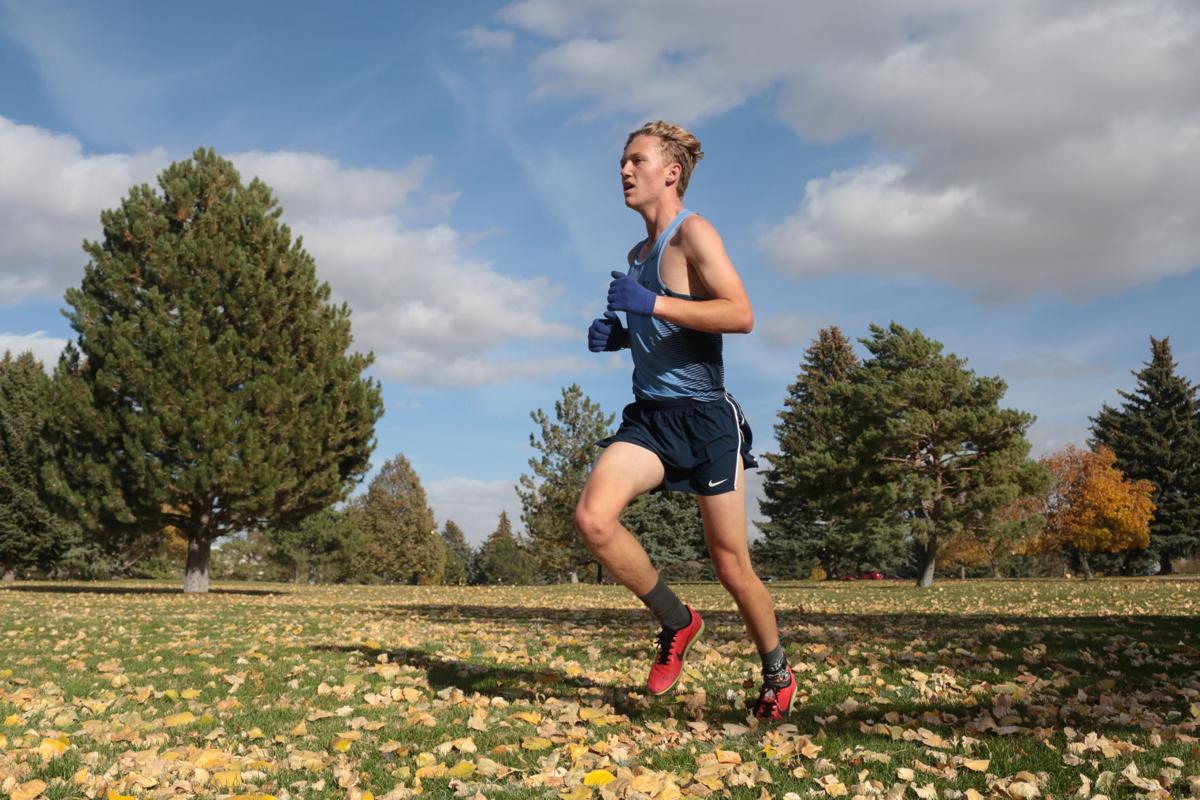 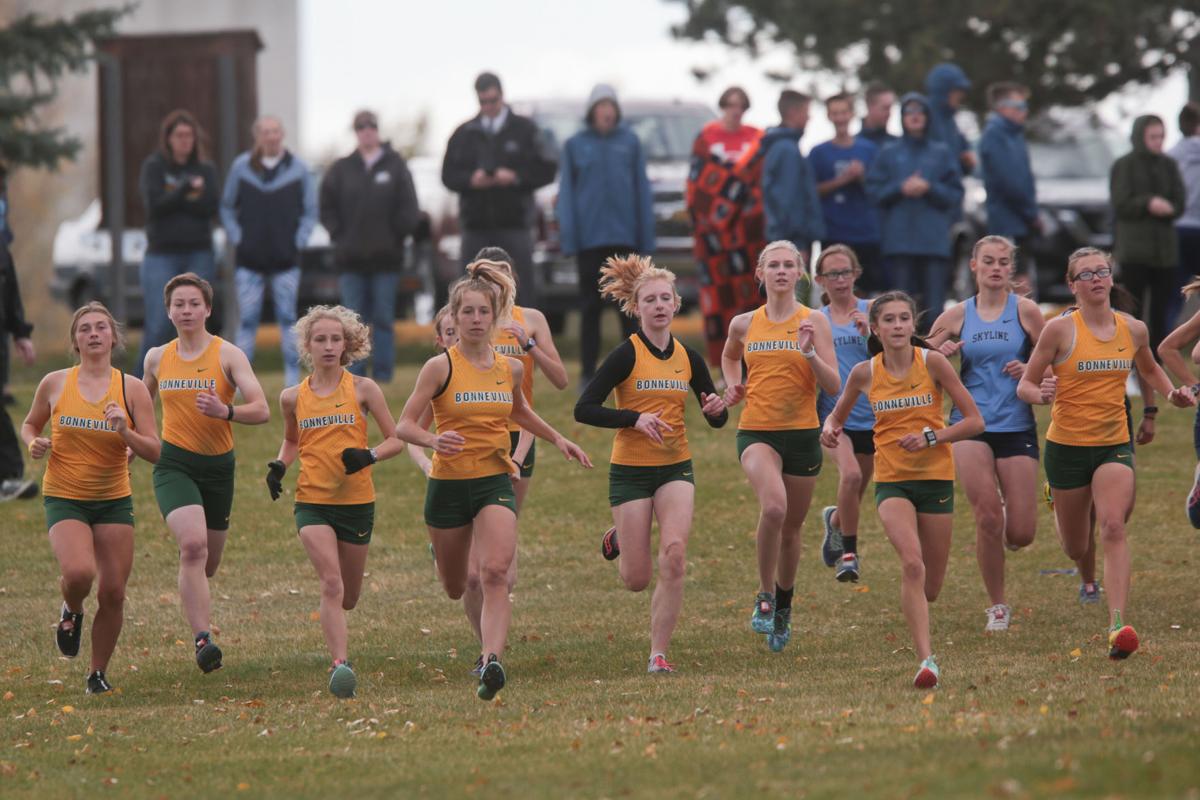 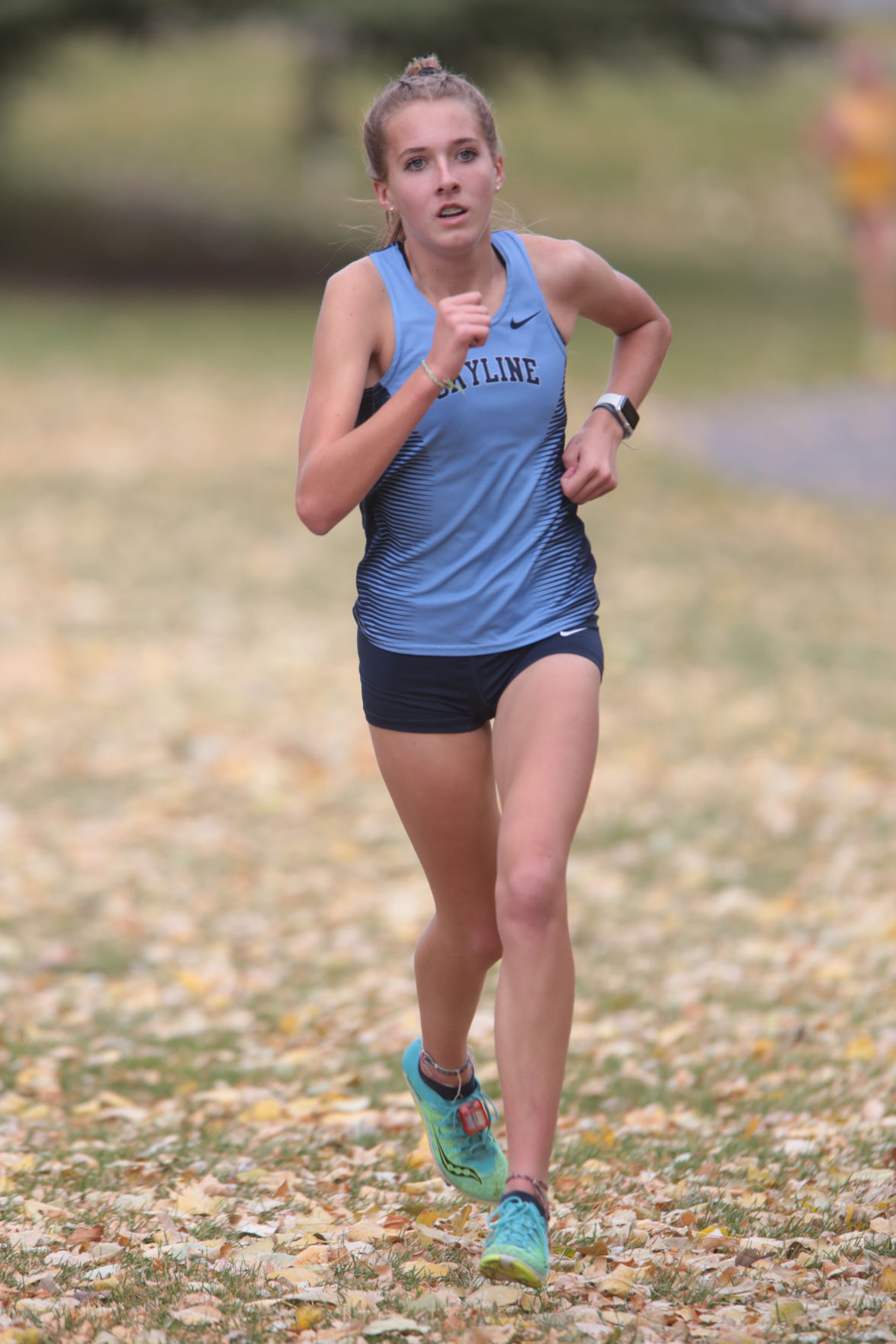 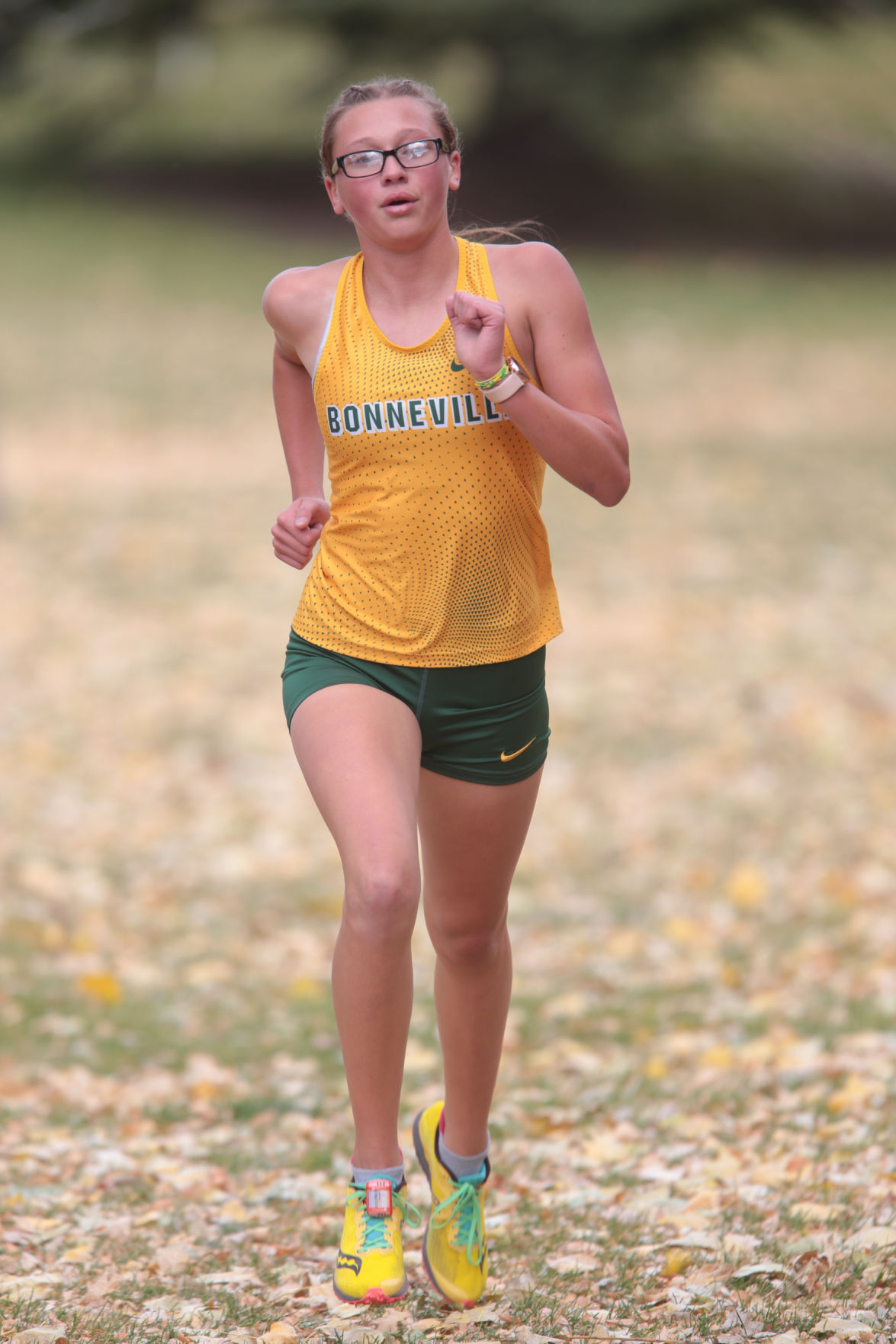 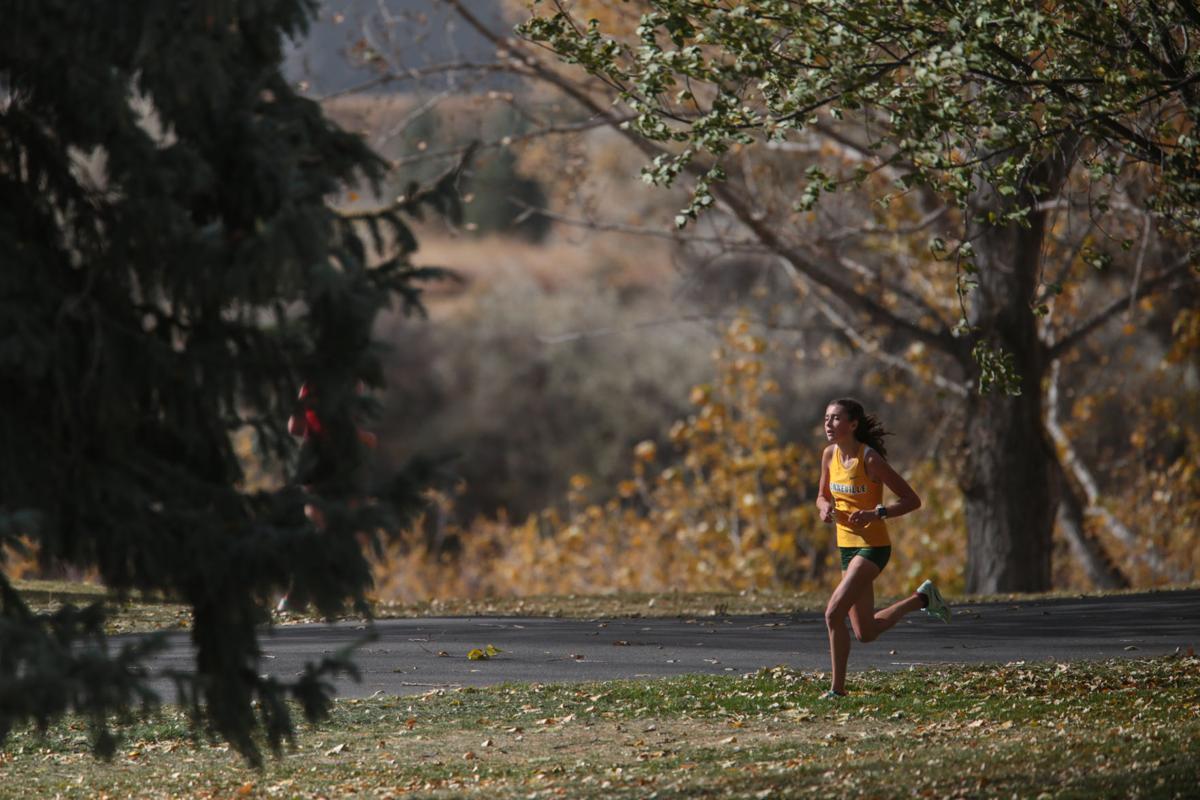 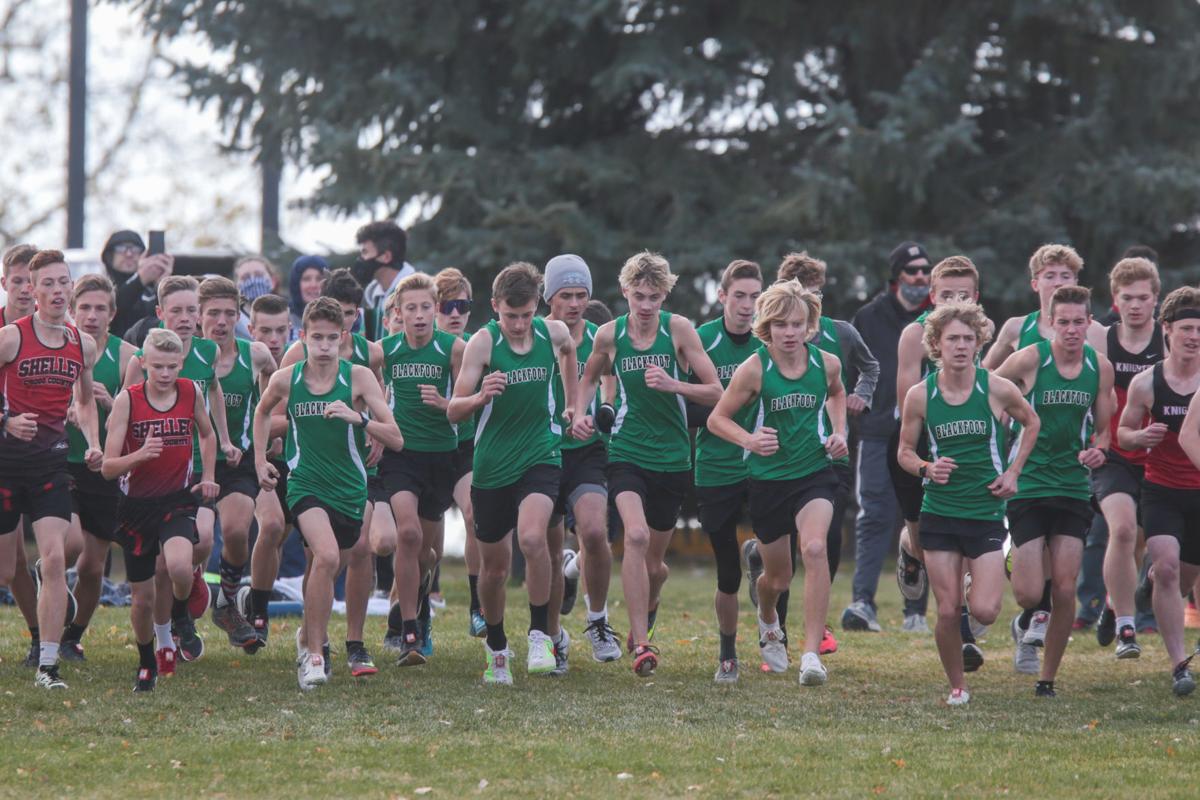 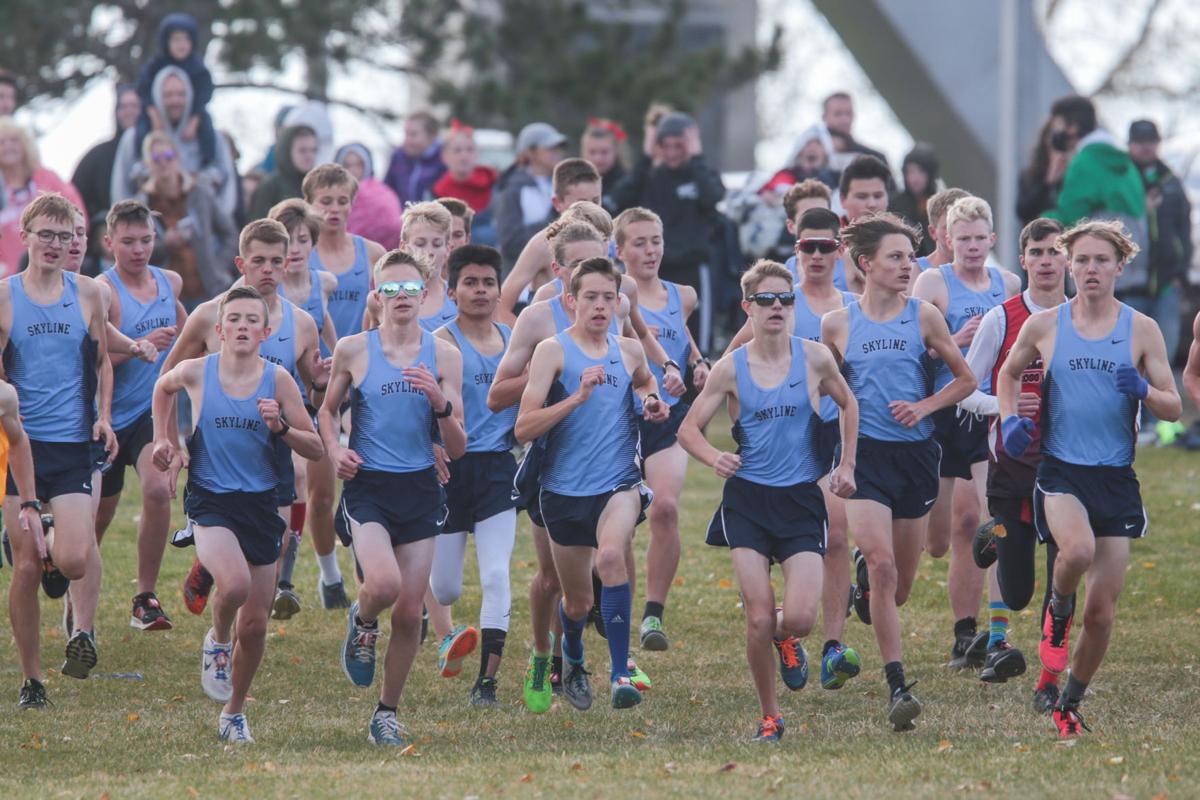 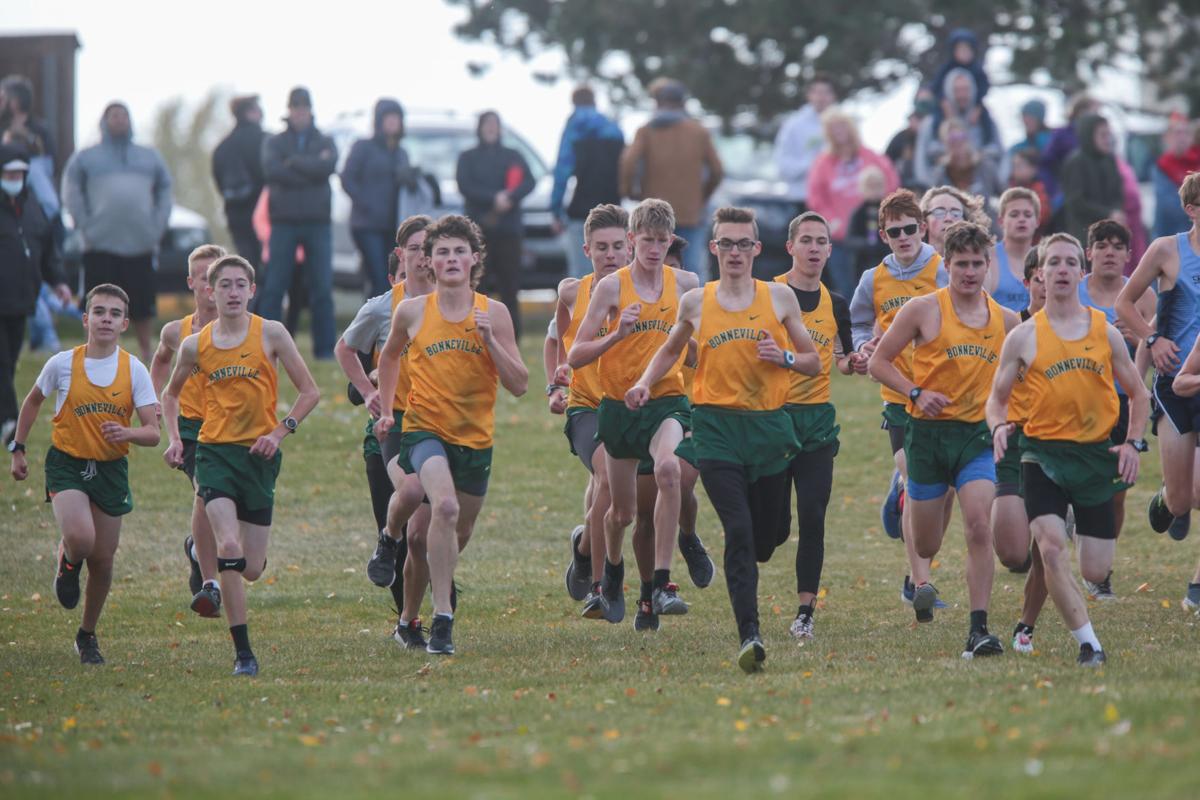 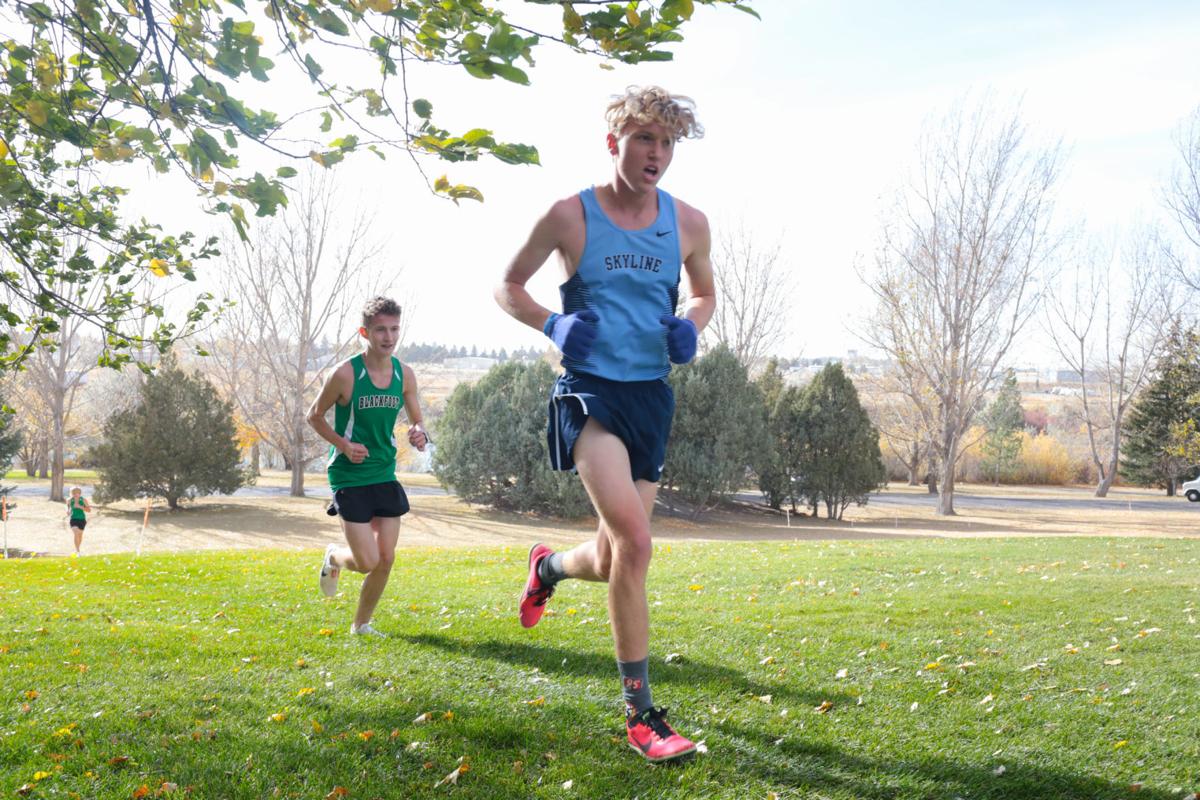 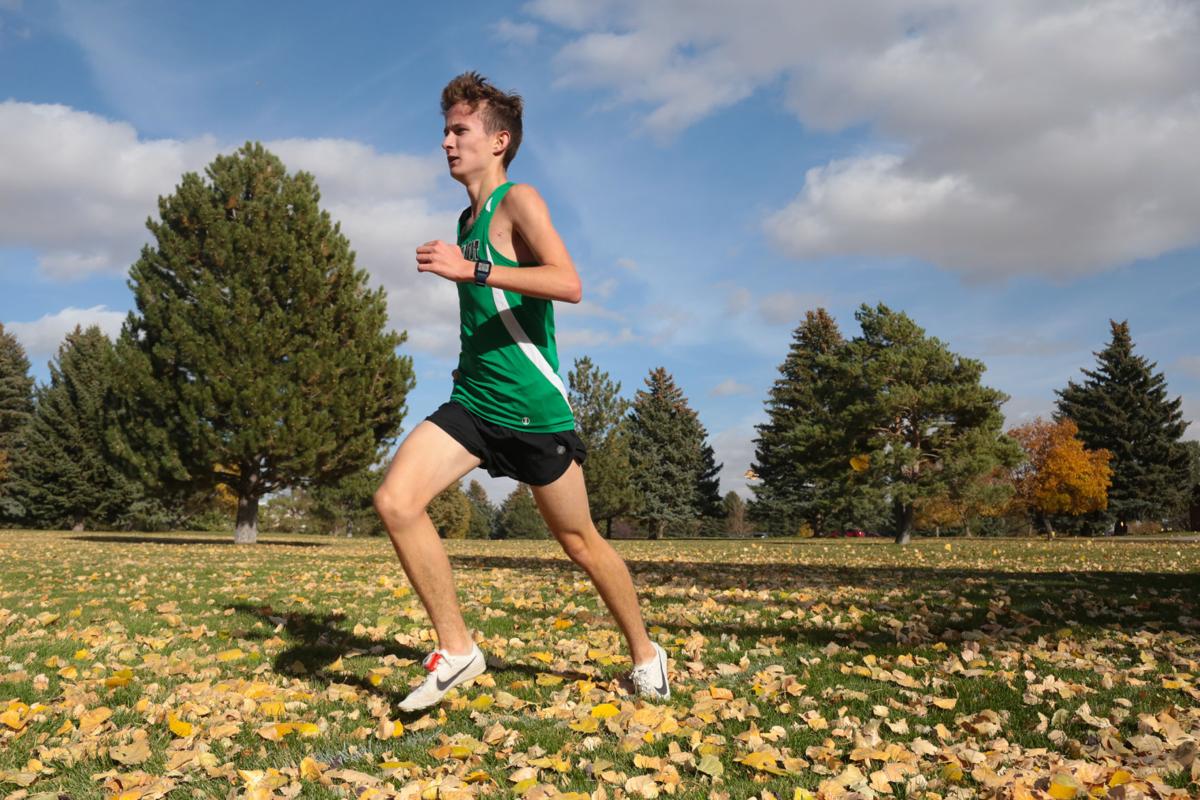 The Skyline girls team starts the 4A District 6 cross-country championships at Russ Freeman Park on Wednesday.

Bonneville’s Alivia Johnson clocked 18:54.12 to win the 4A District 6 title

The 4A District 6 cross-country championships have provided many big moments in recent seasons, and Wednesday’s meet added to the history.

With defending boys and girls district and state champions Idaho Falls moving up to 5A this season, team titles were up for grabs and they were claimed in commanding fashion. Skyline won the girls title, posting a score of 29 thanks to four girls finishing in the top seven, and Blackfoot clinched the boys title with a score of 18 and five finishers in the top six.

History was made all around. Per Post Register records going back to 1999, Johnson is Bonneville’s first girls individual cross-country district champion since Reve’ Tortel in 2006.

Johnson gasped and covered her face upon learning this.

“That’s awesome. Oh my gosh,” said the sophomore, who has now won all but one of eight races this season. “Everyone says this course is really hard, but I love it. I know it like the back of my hand.”

According to Blackfoot principal Roger Thomas, Gregory is believed to be Blackfoot’s first boys individual district cross-country champion since 1989. The last one before Wednesday? Mr. Thomas himself.

“It was amazing to see all our runners do as well as we did today,” Gregory said. “We performed how we wanted to. Our (number) three, four and five (runners) were all close together.”

Johnson took the lead early, ultimately winning by 17 seconds over Skyline freshman Nelah Roberts. Johnson extended her arms to Roberts as they neared one another in the finish area, where they embraced. They later took photos together with their medals, and Bonneville green blended with Skyline blue as team members watched the boys race together.

“I met her this year and she is so nice,” Johnson said. “She and Sariah (Harrison) and the whole Skyline team is so nice. Skyline’s girls are awesome.”

The leaders of the boys race changed throughout the course. Whitehead led early before Gregory took over the lead ascending the hill to the Vietnam War memorial. Toward the end of the race, Whitehead moved past Skyline’s Ridge Wilding into second place and ultimately finished 20 seconds behind Gregory.

After the race, Blackfoot coach Jason Lish had to pause while describing what led up to Wednesday’s celebratory moment.

“Hard work,” he said, gripping the 4A District 6 trophy in his left hand. “There’s a lot of kids who aren’t here who have paved the way ... (graduates) Austin Despain, Derek Thomas who started to build it. And my assistant coaches James Cannon and Debbie Armstrong have been with us and done an amazing job.”

The 4A state meet scheduled for Oct. 30 at Pocatello’s Portneuf Wellness Complex is looking to be an eastern Idaho showcase. Based on performances thus far this season, the Skyline, Bonneville and Blackfoot girls are in the trophy mix with District 5 teams Preston and Pocatello.

“It’s not going to be easy for us next week,” said Skyline head coach Sean Schmidt.

Skyline’s girls have won five meets through Wednesday and have won a state trophy each of the last three seasons. Senior Sariah Harrison, a three-time state medalist who was fourth Wednesday in 20:29.66, was a freshman on the 2017 team which edged Twin Falls by four points to win Skyline’s first girls cross-country state title. Three-time defending individual district champion entering Wednesday’s race, Harrison said she is having fun this season and enjoying being able to run after being diagnosed with a tightened fascia following last season.

Roberts, the third sibling in her family in four years to reach the state cross-country meet, had high praise for her teammates.

“They’re all pretty much my best friends,” said the freshman, who will be also be competing in this week’s 4A state soccer championships. “We’re all close and like each other so much.”

Eastern Idaho is also favored on the boys side for the 4A state meet. Like the girls, Blackfoot and Skyline are in trophy contention with Preston and Pocatello.

Blackfoot won four consecutive boys cross-country titles from 1972 to 1975, and the closest the Broncos have come to a cross-country state trophy in recent years was fifth place boys in 2017 and 2014.

The current Broncos have a direct connection to those teams from the 1970s, too. Gregory’s father Mike was the last Blackfoot boy to win individual state cross-country titles, doing so in 1972 and 1973.

The top three teams and top 12 individuals from Wednesday’s meet qualified for state.

At Rexburg Municipal Golf Course, Idaho Falls claimed the boys and girls 5A District 5-6 team titles with scores of 31 and 32, respectively.

The Tigers, who moved to 5A this season after winning three consecutive 4A boys state titles and sweeping the 4A girls and boys district and state titles last season, had five boys finish in the top 10 and five girls finish in the top 12. Senior Mitchell Athay was the top I.F. boy finisher, placing second in 16:08 while sophomore Allison Lemons led the Tiger girls with third place in 19:57.1.

Head coach Alan McMurtrey said the Tigers rested No. 1 girl Elanor Eddington as a precaution and her teammates stepped up in her absence. He added that the boys race had numerous leaders, with Idaho Falls’s Zac Bright and fellow senior Athay taking turns leading. Madison senior Will Dixon, who won the individual district title in 15:53.7 for his third 5k meet victory of the season, drafted Bright and Athay until making his move to take over the lead. Dixon is Madison’s first boys individual district champion since Jon Stutz in 2014.

The Diggers also claimed individual titles. Sophomore Porter Holt won the boys race in 17:22.9--his first win of the season--while junior Jaresa Jackson collected her second 5k meet victory of the season by winning the girls race in 20:10.7.

At Firth, Salmon completed its fourth consecutive sweep of the 2A District 6 boys and girls titles.

At Arco, Butte County swept the 1A District 6 team titles for the third consecutive year.

The boys won the team title 26-29 over Leadore while the girls were the only complete team at the meet.